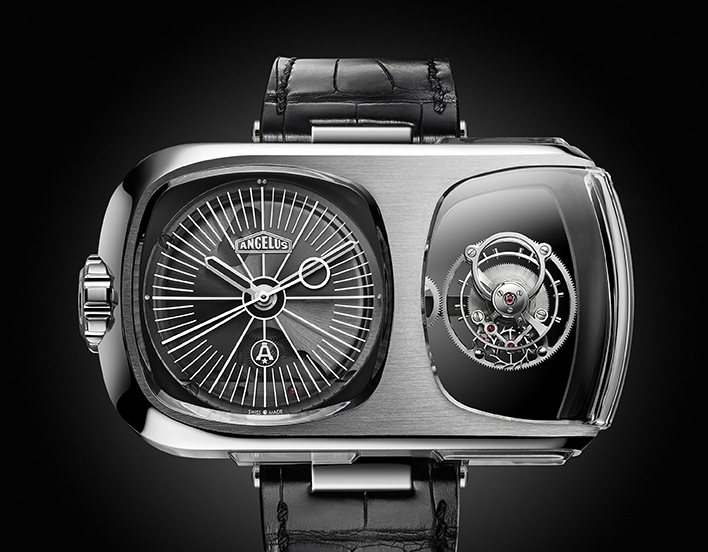 With the U10 Tourbillon Lumière, Angelus has done something devilishly clever. The swiss watchmaker managed to reach into horology’s past and pull forth something that looks remarkably modern. Mixing vintage and modern sensibilities together should have produced something pretty garish, but in the very capable hands of Angelus, the U10 Tourbillon Lumière is a wonderfully cohesive achievement in design. Aesthetics clearly culled from the 60’s and 70’s mesh beautifully with the sleek annealed steel that incases the watch’s notable movement, producing a pleasingly unique timepiece with design elements from today, yesterday and tomorrow.

One of the most striking aspects of the watch are the three-dimensional sapphire crystal windows that house the tourbillon. In fact, the watch was dubbed the Lumière for how freely light is allowed to shine through the sapphire crystals windows, illuminating the tourbillon’s movement and giving the wearer unfettered access to watch’s beating heart . The innovative movement pays homage to Angelus’ 19th-century origins as a premium movement maker. Under the hood of the  U10 Tourbillon Lumière is a finely finished, in-house calibre complete with oversized, one-minute flying tourbillon, which is offset from the movement.

The case is crafted out of BO-988 specific steel, an annealed steel that contains fewer impurities and is less likely to corrode than the 316L steel that is usually found in timepieces of this caliber.

Angelus claims that the design of the U10 Tourbillion Lumière harkens back to the travel clocks the company manufactured between the 1930’s and the 1960’s. The  Lumière’s multiple sapphire windows that display the dial and the tourbillion in different compartments are reminiscent of those old clocks, which would use dedicated windows to display various bits of information. It’s an idea that we’re glad to see is making its way back into luxury watchmaking.

The Angelus U10 Tourbillon has a limited run of 25 pieces