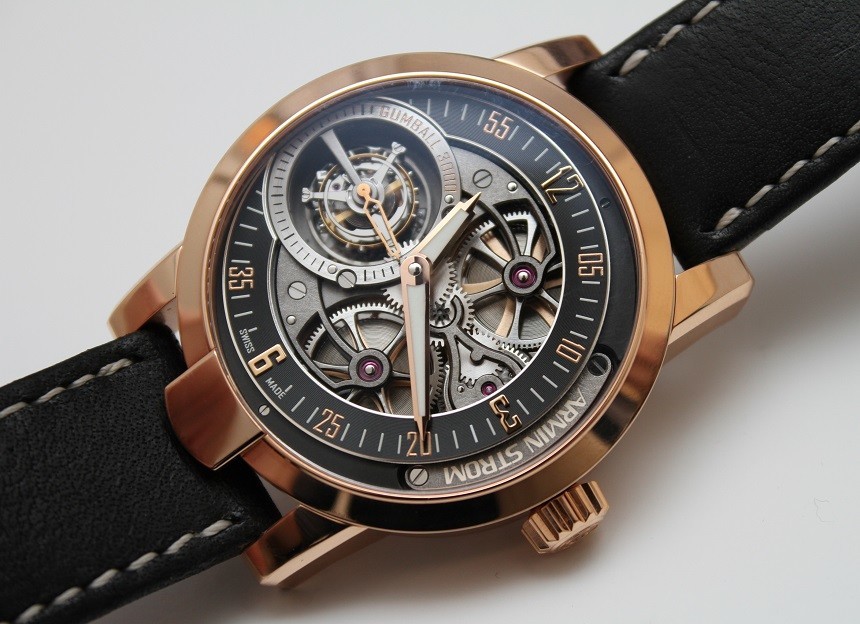 Collaborations between luxury watch brands and world-renowned sporting events are nothing new, but the products these unions sire are always worth examining. It’s pretty tough to guess how a brand, especially those known for serious haute horlogerie, will tackle the task of fusing their ideology with that of another institution. 2015 sees the release of a trio of Armin Strom Gumball 3000 special edition watches, designed to celebrate the legendary Gumball 3000 Rally.

The Gumball 3000, as it is known, began life on British shores, but is now a truly global event, with the course changing each year to keep things interesting. The rally, which has not avoided controversy since its foundation in 1999, is popular with celebrities and wealthy civilians, all of whom drive the car of their choice on the public road course in pursuit of glory and/or the trip of a lifetime. The Armin Strom Manual Gumball 3000, Double Barrel Gumball 3000, and the Armin Strom Tourbillon Gumball 3000 are interesting additions to a range that has, in the past, focused on clean lines and conservative colorways. How then, will a project that aims to inject some of the Gumball Rally’s characteristic chaos into the brand fare? 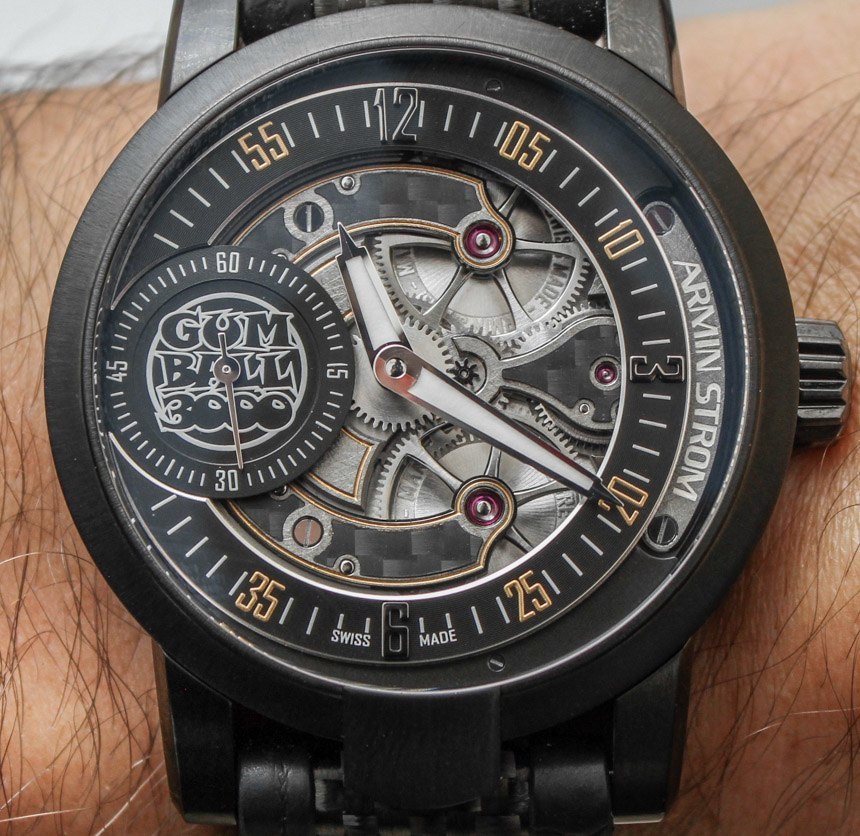 When I heard of this triple-header release, I had no idea what to expect. The Gumball Rally seemed a really “out there” choice of collaboration for such a strait-laced brand, but one I was looking forward to seeing. I kind of hoped that Armin Strom would go down the wacky Swatch route and totally trick out these timepieces with bold, goofy graphics and eye-popping fonts rather than the (understandably) more restrained approaches of brands like Omega with the America’s Cup Watch or Tag Heuer with the Formula One pieces. What resulted was something in between that could either strike the right balance or leave you feeling a bit flat. 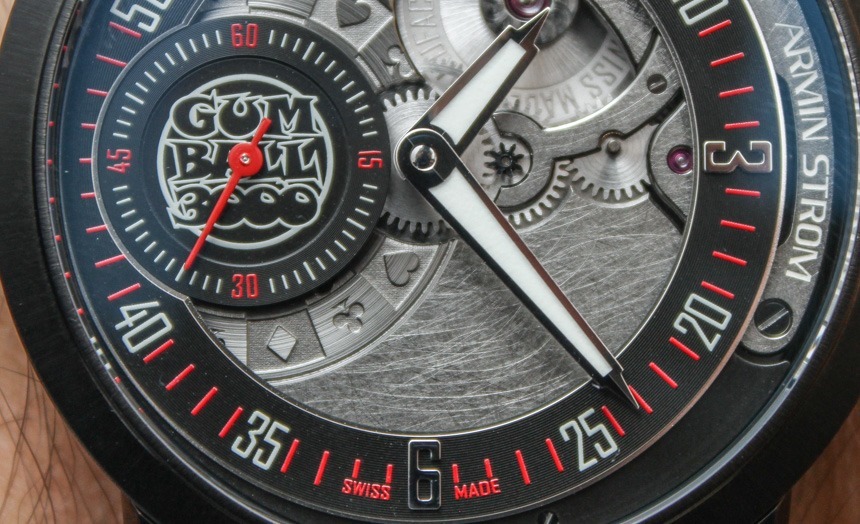 The difficulty with pulling off a celebratory collection like this is getting enough event branding into the piece without it becoming a grotesque billboard. With this collection, Armin Strom have managed to integrate the Gumball 3000 script logo into the design, but does it work? Do these watches have enough Gumball to send the right message, or does the labelling jar too much with its fancy frame? Let’s take a look at the collection, piece by piece to find out… 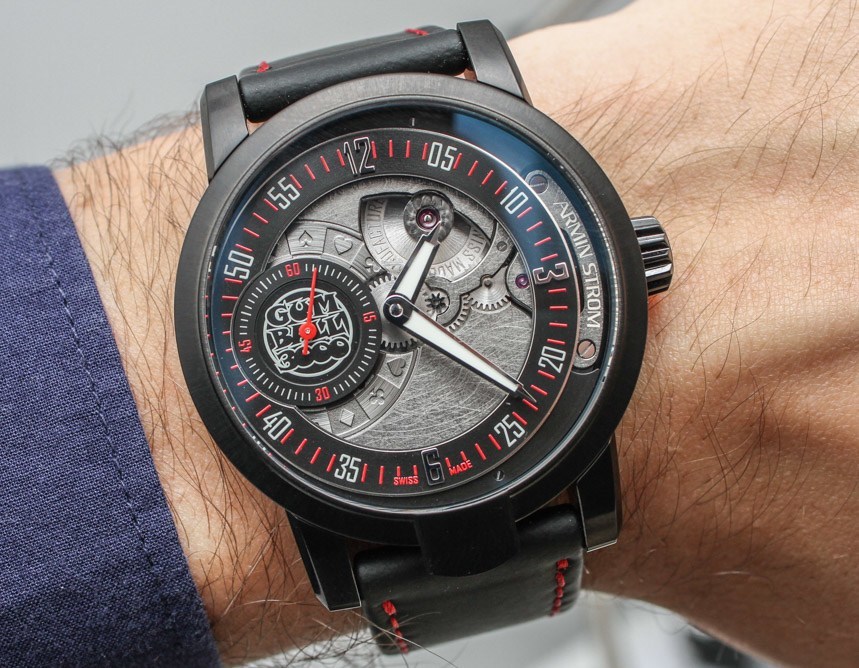 The first piece of the three is the Armin Strom Manual Gumball 3000, which features the AMW11-GB hand-wound movement, offering a 5-day power reserve. This calibre is visible through the display case back and has a definite look of the Old West about it. I can’t quite put my finger on it, but something about the almost wood-like graining and the style of the engraved script screams Saloon Bar to me (which I absolutely love). The balance bridge is a finely crafted curve that plays a respective second fiddle to the screw balance wheel. The balance itself, which is, as many of Armin Strom’s components are, refreshingly chunky and easy to observe. Making a centrepiece of the actual mechanics is a great way to make a watch seem active. The case appears to be bursting with motion, which, in the case of the this watch, is doubly important given the plainness of the movement decoration. 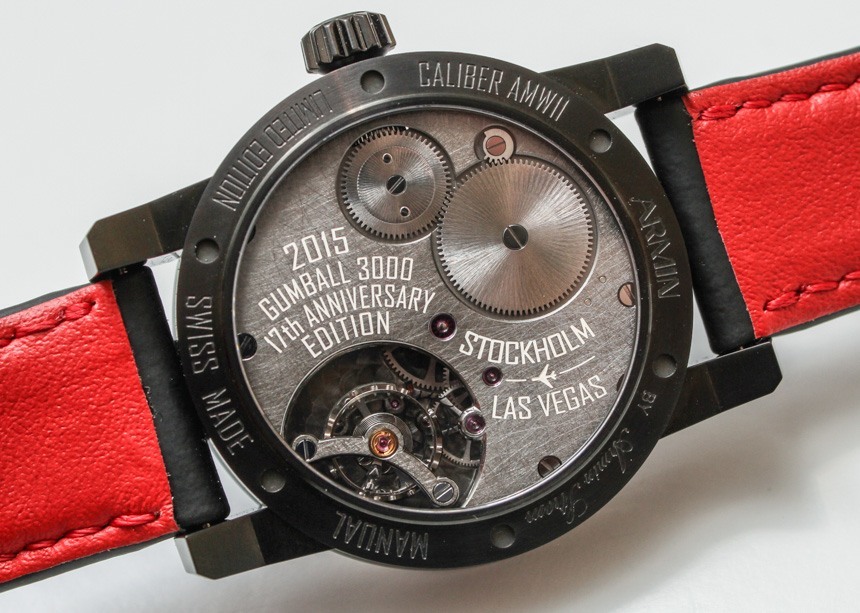 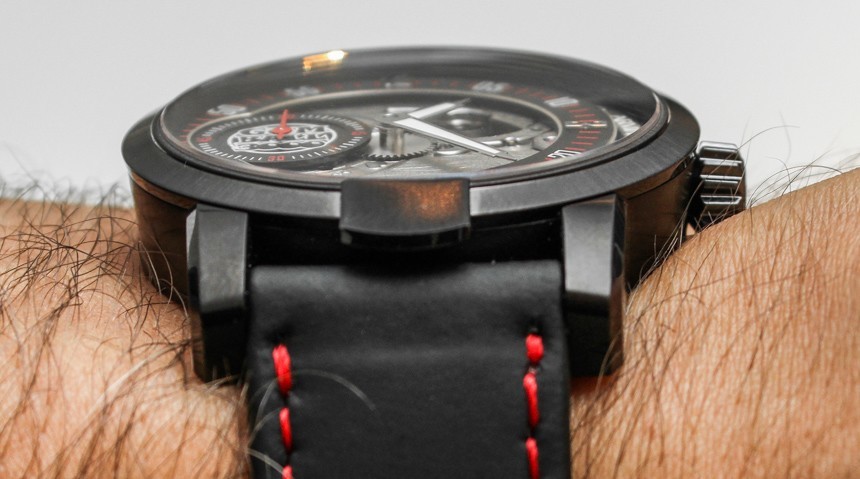 I really like the sense of space and strength of finish on the back of the Armin Strom Manual Gumball 3000, and the build quality is, of course, excellent, as we have gotten used to seeing from Armin Strom. With a price tag of €15,200, however, it really is aimed at a demographic that has the means to enter and complete the Gumball 3000 rally. I find the dial side to be a little more exciting than the back, with the classic, off-centre cutaway dial revealing the bare metal of the movement, which has been engraved with a playing card motif that surrounds the 9 o’clock sub-dial. And it is there that we see the real branding of the Gumball 3000! 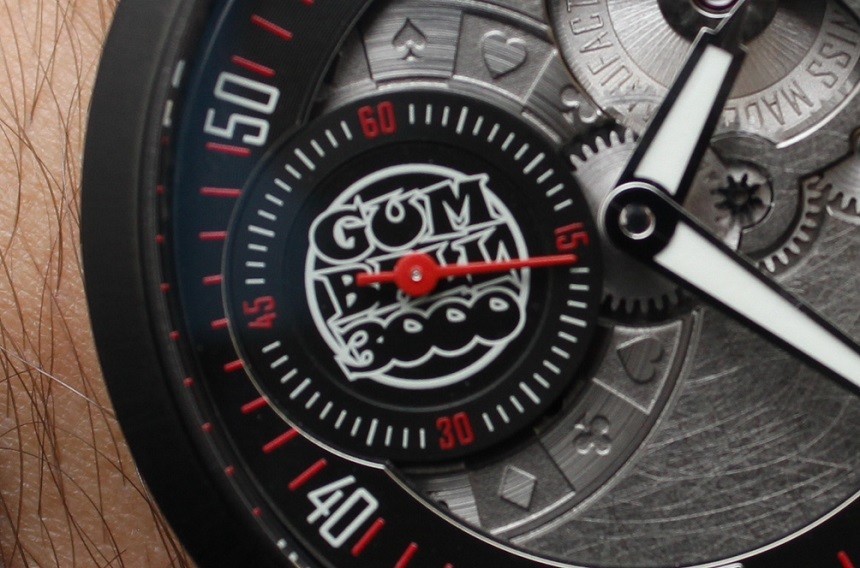 The zany script logo provides the background to the going seconds hand. I don’t love this dial, but I think it looks a lot better on the wrist than on macro photography. The bare metal that shows through the skeletonized dial flashes attractively in real life; in pictures it looks a bit gray and lifeless against the PVD coated stainless steel case. This one, despite being very scaled back, is much more wearable. It could be argued that it is the most desirable of the three based solely on the fact that it actually states the anniversary (17th) and start/finish of the route (Stockholm/Las Vegas). For that reason, it may appeal to Gumball memorabilia collectors more than its two big brothers. 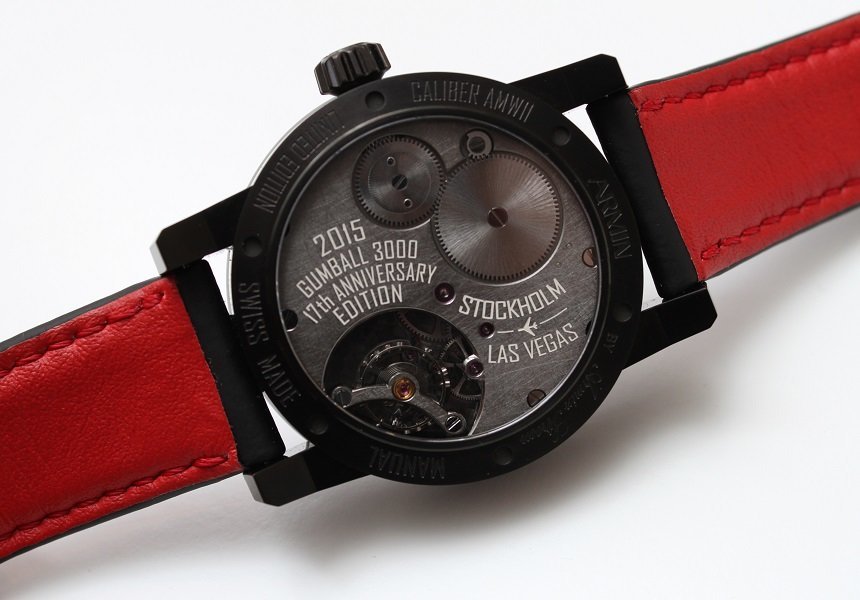 Talking of size, all three watches measure 43.4mm across and 13mm thick, and they are water resistant to 50 meters. They also sport slightly conical, fluted crowns. These days, 43.4mm is not the biggest thing you’ll see on the end of someone’s arm, but it is a sizable chunk of metal. I’ve always thought that angling the winding button in this manner is a smart, mobility-increasing move. I recently reviewed the new Hamilton Ventura 80, which also does this to great effect. If you own a watch like this, you may well want it to be noticed, but that doesn’t mean you want to constantly notice its presence yourself! 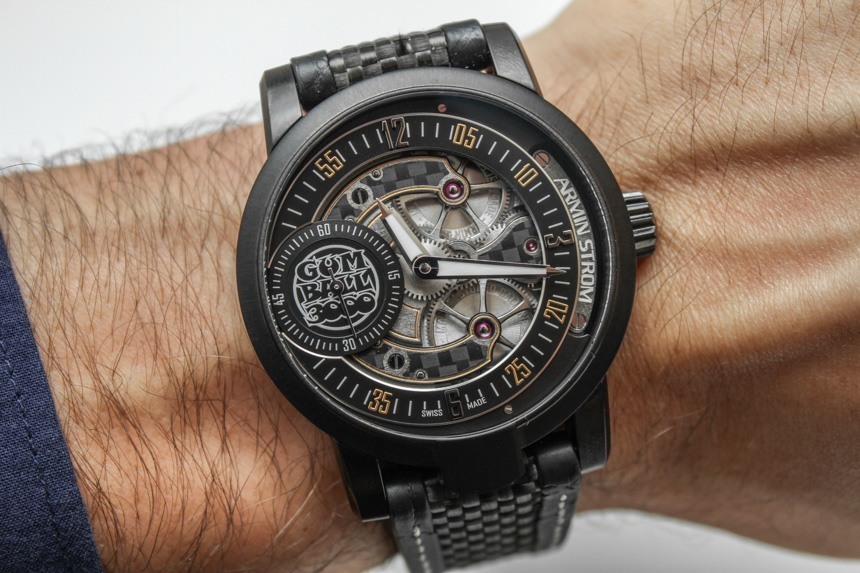 If watch number one was too subdued for you, the level of ostentation is ramped up with the Armin Strom Double Barrel Gumball 3000. This is my personal favourite of the trio. The black case is PVD coated titanium this time, and it houses the ARM12-GB self-winding calibre. The double barrel feature kicks out a 10-day power reserve, meaning this is certainly a watch you can rely on for long car journeys! The movement is again visible through the off-centre cutaway dial, but in this case, we can see a few more functional components peeping through. The large, circularly grained wheels catch the light excellently and breathe a great deal of life into this watch face. Furthermore, the gold edging of the carbon-inlay bridges adds a lustre and sense of completeness the Armin Strom Manual Gumball 3000 arguably lacked. 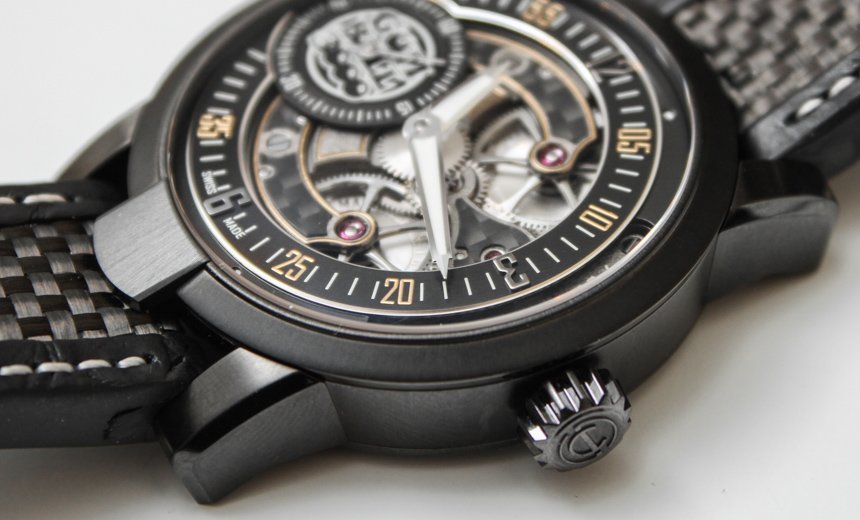 Again, the Gumball 3000 script logo acts as the backdrop to the running seconds sub-dial at 9 o’clock, but it seems much less in your face on this model. This is due to the bi-chromatic colour scheme that drops out the red quarter markers and seconds hand from the first watch. We’re left, instead, with a black and white affair that evades scrutiny much more effectively. The watch is, in my opinion, better looking for the change, but it does call into question this model’s success as an advert for the partnership between Armin Strom and the Rally. 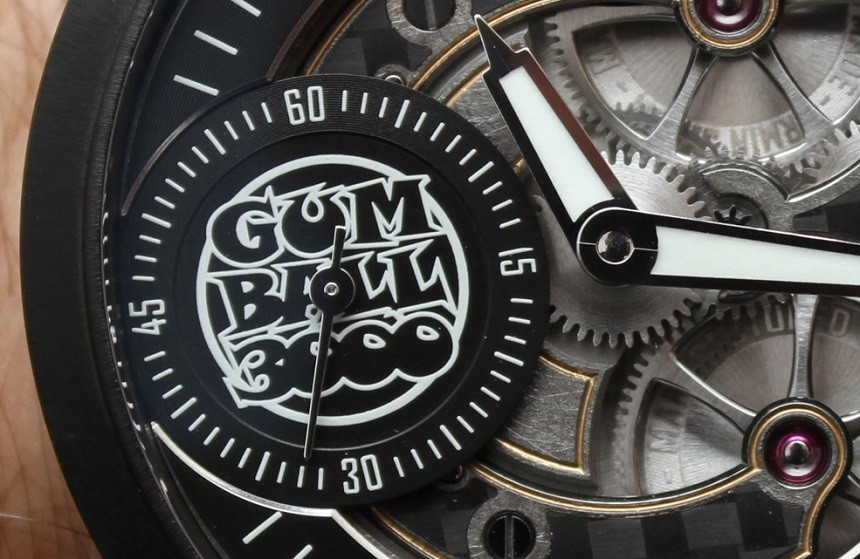 The script logo does appear again on the reverse, dominating the left hand side of the movement, which is visible through a sapphire case back. All the crystals in this collection (both front and back) are sapphire and treated with anti-reflective coating. As well as the large logo engraving on the flip-side, the ARM12-GB calibre displays the balance wheel in the same fashion as its kid brother. Hopefully, that feature will placate those who find the Gumball engraving a bit too crass to stomach.

All three watches operate at 18,000vph. It’s a slow operating speed, meaning the watches would take longer to recover their timekeeping ability after a shock, but the real benefit is the visual effect of a slow-swinging balance – and an extended power reserve. When the balance wheel is so attractive, it is nice to present it to the wearer in a digestible way. And of the three, the one that offers the most in the way of visual delight, is the third and final watch of the Armin Strom Gumball 3000 Collection. 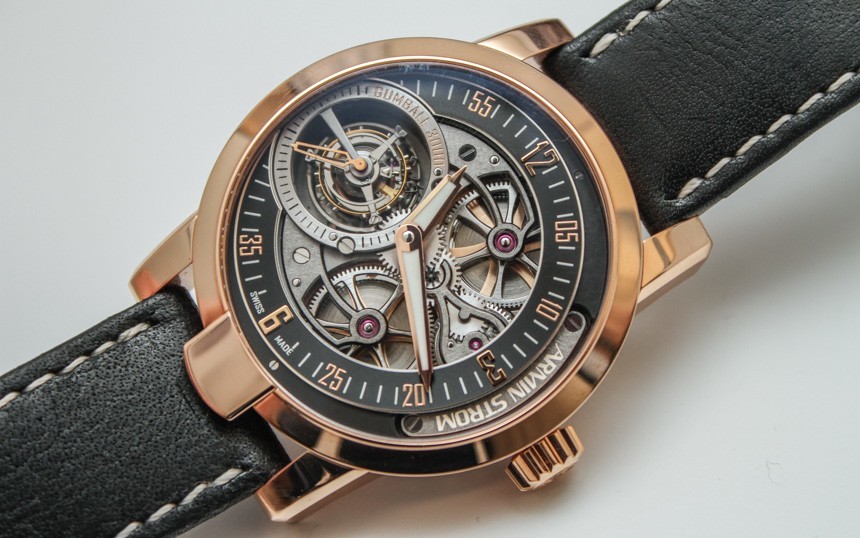 The Armin Strom Tourbillon Gumball 3000 in 18ct rose gold is the daddy of this range. Sporting the hand-wound, double-barrelled, 10-day power reserve ATC11-GB tourbillon movement, this watch means business. From the front, it is the least obviously associated with the Gumball 3000 Rally, with nothing but a gilded engraving around the edge of the 9 o’clock sub-dial in the Armin Strom font. In this instance, though, the sub-dial features more than just the going seconds hand – here we can see a beautifully executed tourbillon cage, rotating for all the world to see. 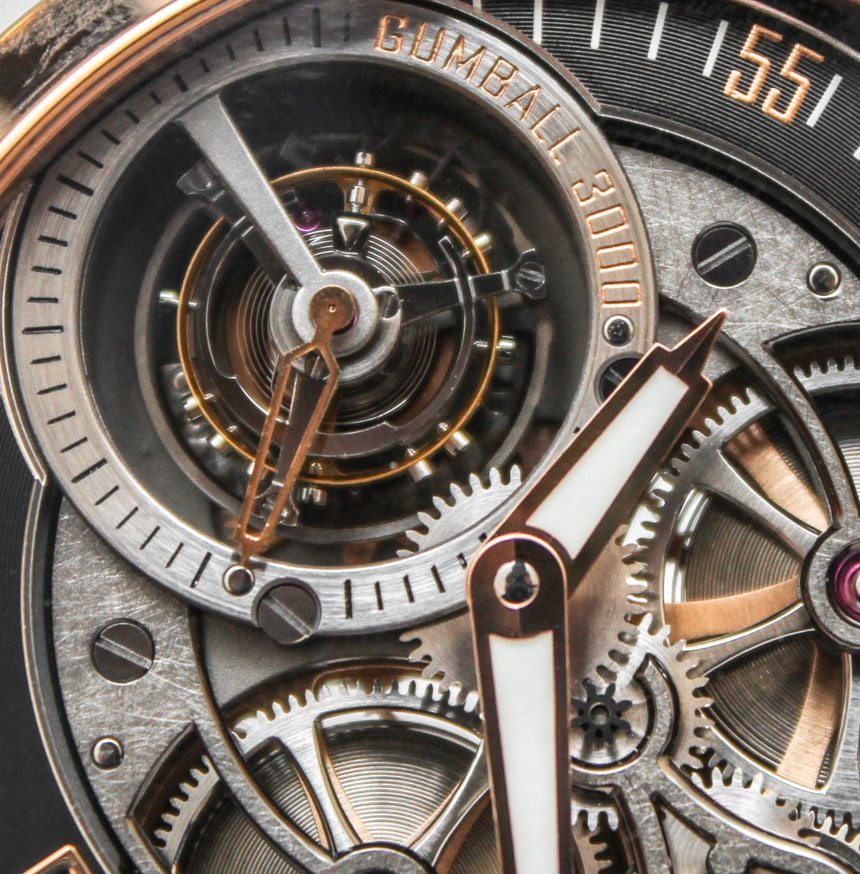 The skeletonization of the dial and underlying bridges goes up a notch with this watch, and here we see a timepiece that would look very much at home in the core catalogue of Armin Strong. So where’s the branding? How is this, the big, bad, rose gold roost-ruler supposed to get away with shirking its advertising duties? Fear not: the case back will take care of that! 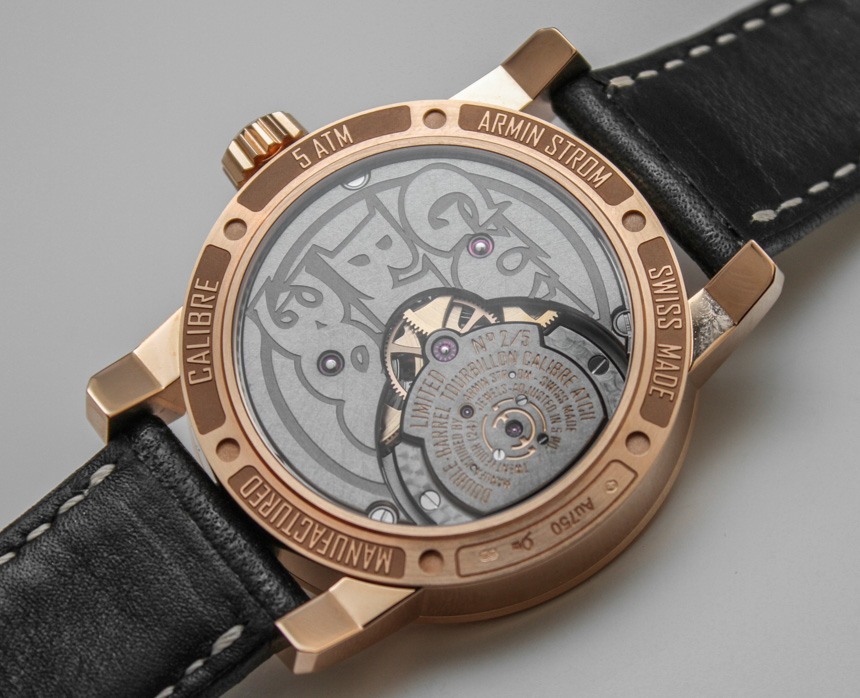 Yes, the Armin Strom Tourbillon Gumball 3000 goes all out with the movement engraving. The Gumball script logo has increased in size from the Double Barrel Gumball 3000 and now covers the calibre, edge-to-edge. There is a small patch of respite, where the tourbillon sits. This almost circular plate is engraved with lots of movement details, which are all gilded. I mean, the Gumball logo on this one is crazy big, but the whole effect is really kind of cool. It’s a good balance between the class of Armin Strong and the maniacal joie de vivre of the Gumball 3000 racers. The flash of rose gold wheels, poking through the gap between the tourbillon bridge and the ¾ plate is really beautiful and coordinates the case material with the movement very nicely. 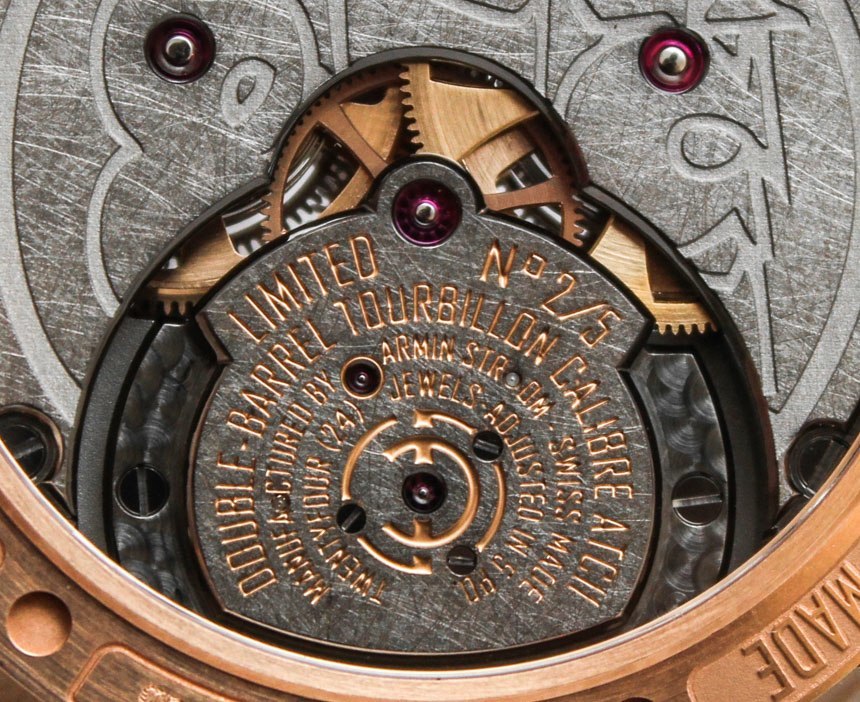 My First Grail Watch Is Serge Michel Of Armin Strom