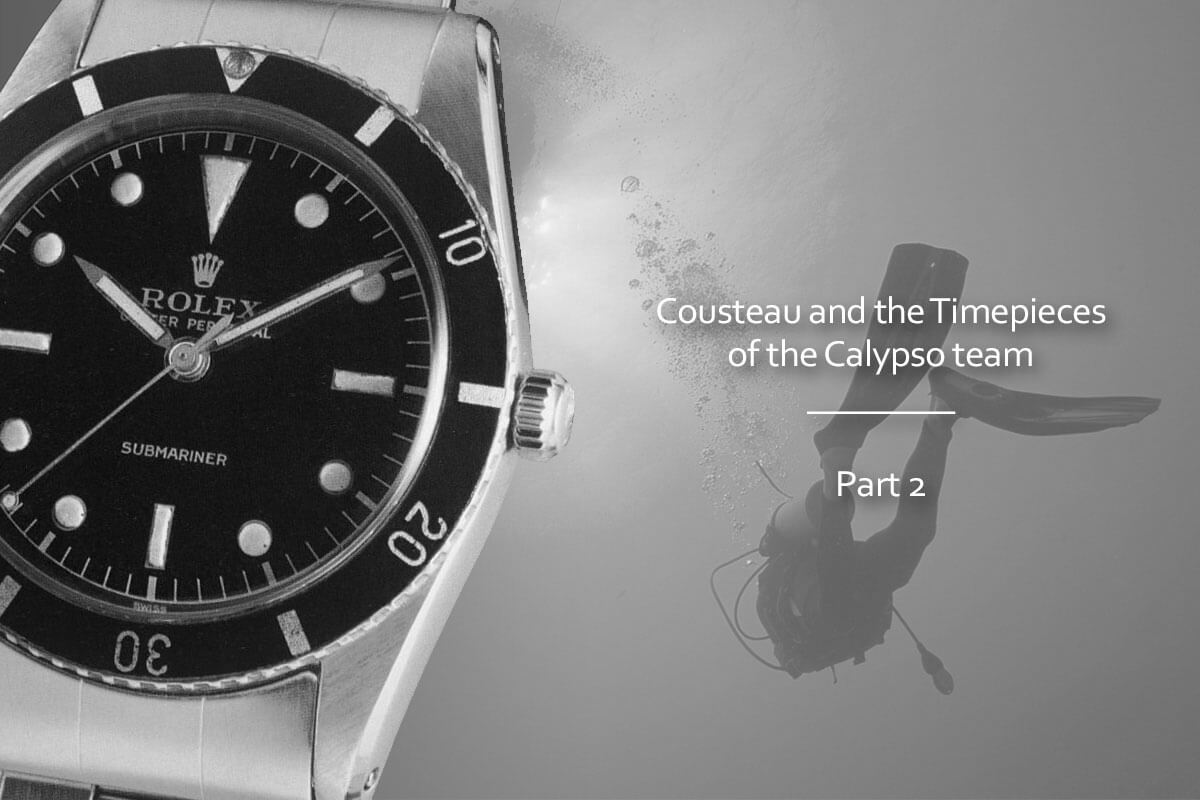 Yesterday we gave a view into the world of diving watches, and specifically the very beginning. While today’s dive watches are mainly used for ‘desk-diving’ – as collectors refer to the wrist time that their dive watches get in the office – and hardly get in contact with the salty sea water that they are designed for, this category of watches remains very popular. However back in the 1950’s and 1960’s people like Jacques-Yves Cousteau did ground-breaking work researching and developing, together with a number of watch companies, the necessary properties for dive watches. In those days, dive watches were life-saving tools; something that is in strong contrast with today’s main use of this category of watches. This morning we start with the actual watches that Cousteau and his team wore during the 1960’s. This afternoon we’ll tell you all about their watches in the 1970’s and 1980’s.

Lets Talk about Watches…. Cousteau’s watches in the 1960’s

Right after the Second World War in France, Captain Robert ‘Bob’ Maloubier and Lieutenant Claude Riffaud, both of the French combat diving corps, started to search for a watch capable of withstanding their military diving missions – they helped Blancpain to introduce the legendary Fifty Fathoms. In the film ‘Silent World’ (1956) we can see Cousteau having on his wrist probably an early Rolex ref.6205, while Andre Laban, his chief diver and engineer wore a first series Blancpain FF. The Rolex is one of the earliest reference Submariners, and traditionally it is the first reference to feature a dial that actually reads “Submariner” on it. At its very early stages, this iconic diver from Rolex had been presented at Baselworld in 1954 and was then considered along with the Blancpain FF as the pinnacle of diver’s watch technology. 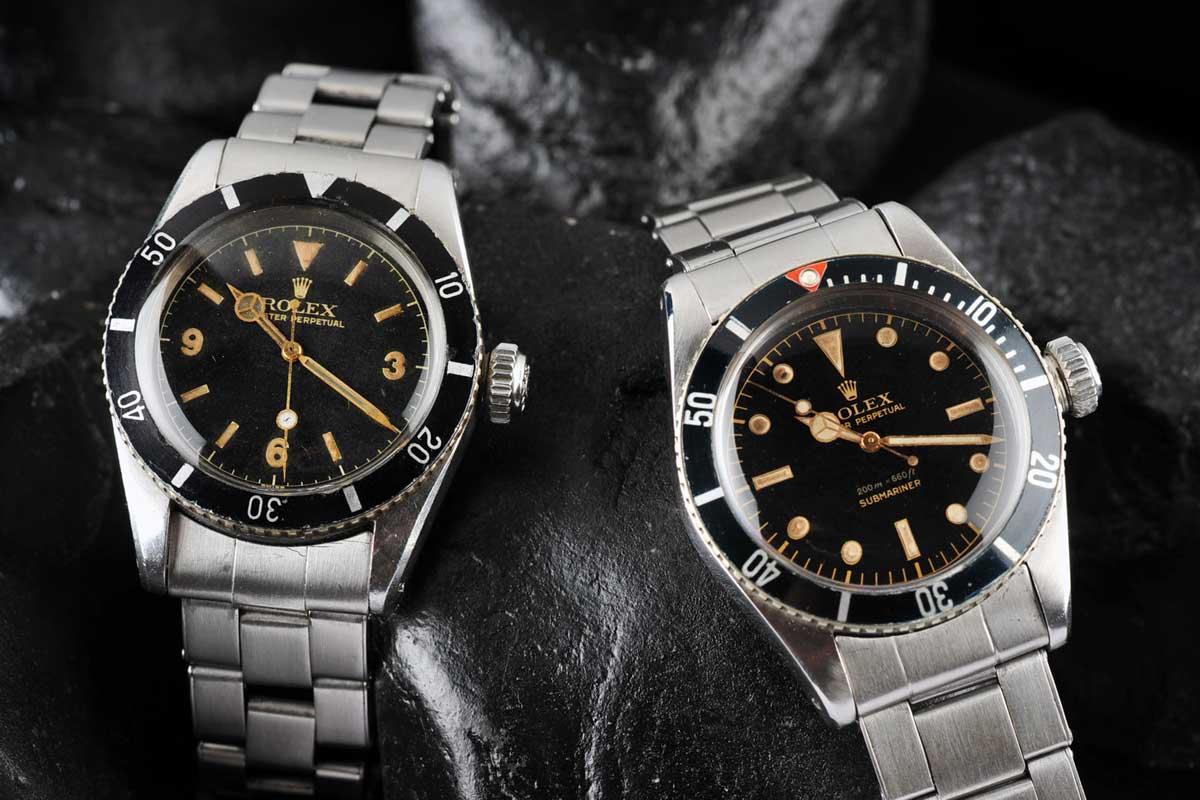 As soon as the Rolex Submariner became available, consumers could buy 3 different models. These were the Submariner ref.6200 with a water resistance of 200 meters, the Submariner ref.6204 with a 100-meter water resistance and the Submariner ref.6205 with self-winding movement caliber A.260 and a water resistance of 100 meters. There were also no crown guards at the time yet. The FF is considered the first ‘modern’ dive watch and carried all the design elements we now consider as standard in our modern dive watches (a black dial with contrasting, self-luminous numbers and indexes, a notched unidirectional bezel also in black with luminous numbers and indexes). The round case of the first edition measured 42 millimeters with long lugs. The watch was designed to be waterproof up to a depth of 50 fathoms – which led the brand to call it the “Fifty Fathoms”. Fifty Fathoms, a British measuring unit, corresponds to a depth of 91.45 meters, which, at that time, considered as the maximum depth that divers could safely reach. 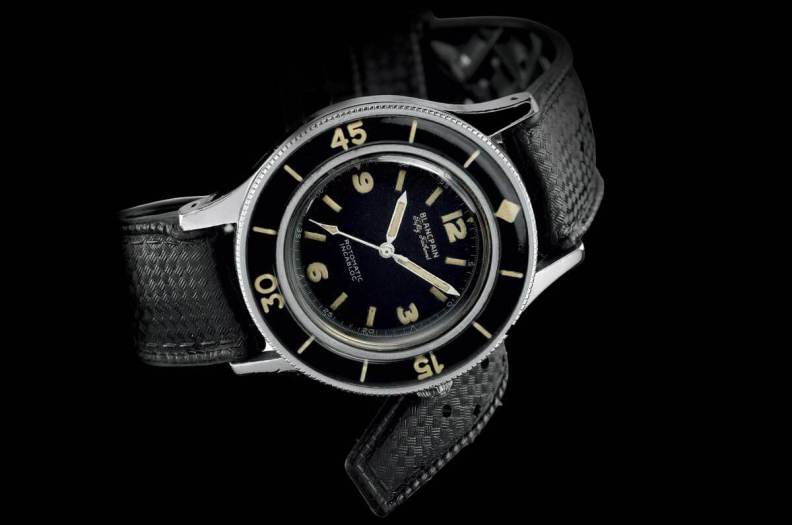 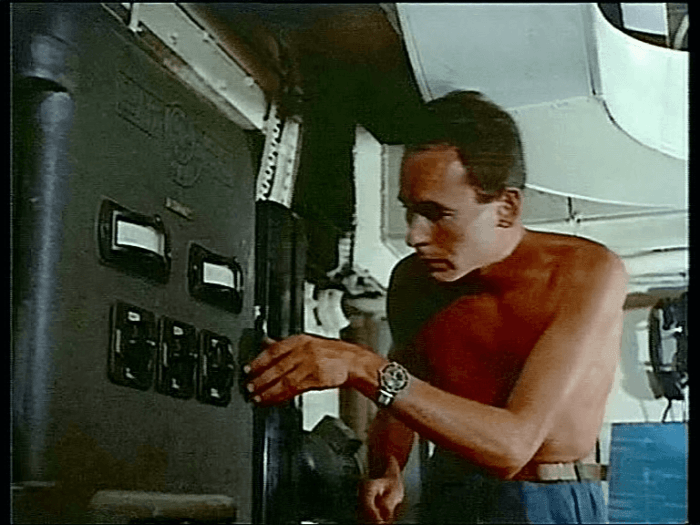 Besides these two and up to the early 1970’s Cousteau and his team can be seen with Omega Seamaster 300’s, Lip Nautic Ski’s and the Aquastar Deepstar. In the ‘World without Sun’ film, and in the early part of the series ‘The undersea world of Jacques Cousteau’ we can see Albert Falco with a Blancpain FF and Jacques Cousteau and Andre Laban with early Rolex submariners (no crown guards/NCG). 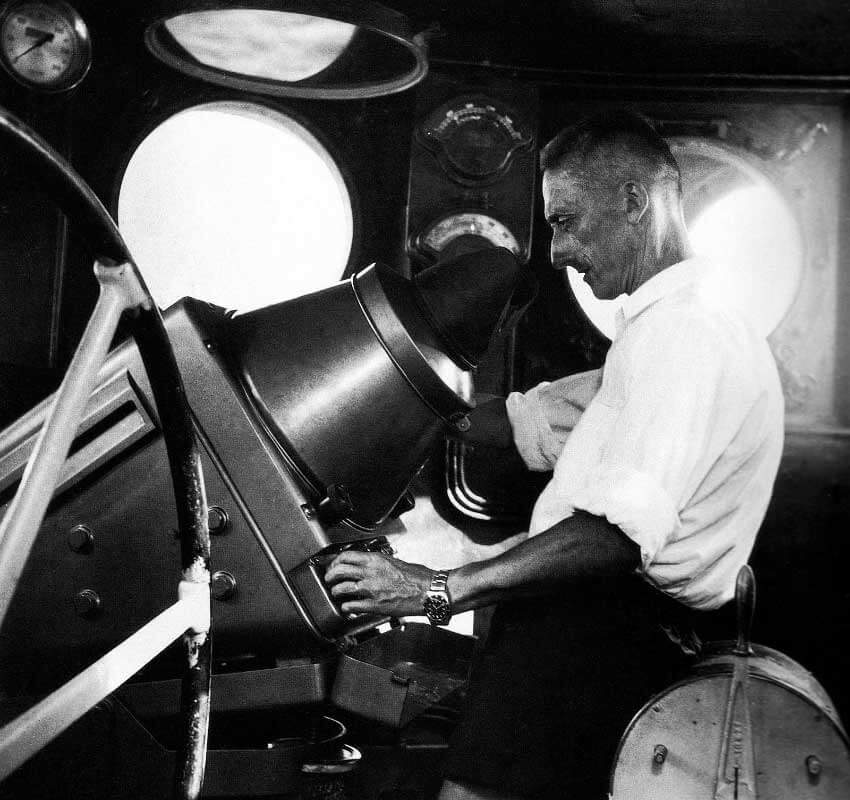 Jacques Cousteau with a Rolex Submariner

The Conshelf II diver team had experimental Omega Seamaster 300’s (ref.165.024), and since the model was introduced in 1964 and the experiment started in the summer of 1963. Raymond Coll and Philippe Cousteau can also be seen wearing Aquastar Deepstar models while Bernard Delmotte wore among others a Nivada Grenchen Depthomatic. The ZRC Grands Fonds and also the Lip Nautic-Ski can be seen on the wrists of various divers. But lets put things into order here and refer to the watches in little detail. 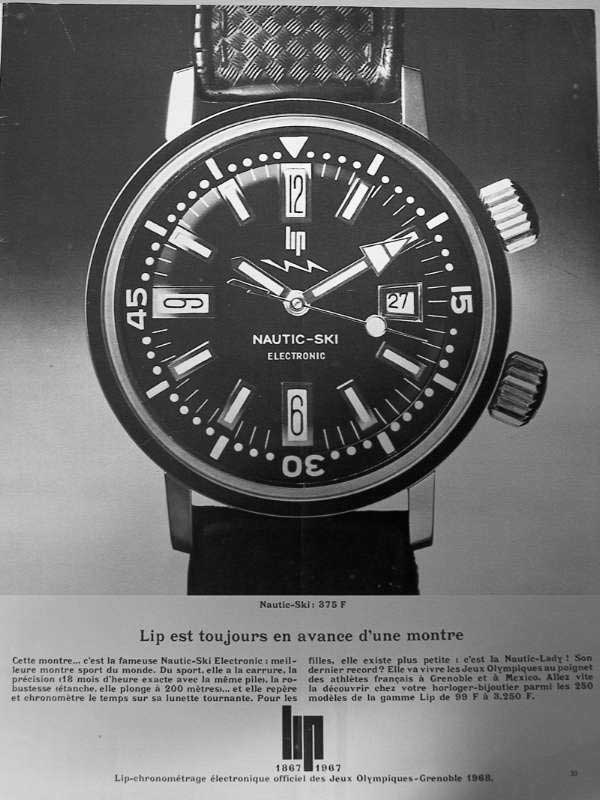 The Lip Nautic-Ski introduced in 1967 and became quite famous because of the Calypso connection mainly. It was cutting edge technology at the time and featured two crowns; a case that was soon named ‘Supercompressor’. This case, invented by Ervin Piquerez, offered 200m water resistance without screw-down crowns and the R184 electro-mechanical movement was to be the future of watch accuracy.

Lip started experimenting with electricity already back in 1928, and they produced some interesting electric clocks in the pre-war period, but it wasn’t until 1948 that they started work seriously on electric watches. In 1958, Lip put their first R27-based electromechanical watch on the market, but it was the R148 that made the difference and equipped the Nautic-Ski. The R148 was Lip’s second electro-mechanical movement, but their first really successful one. It still used a balance, but had improved switching and circuitry, and only needed one battery as opposed to the R27’s two. It was also easier to produce and regulate. It had 14 jewels and beat at 18,000.

Another diver from this period is the Z.R.C. étanche grands fonds. Made by the French bracelet manufacturer Zuccolo, Rochet & Cie the watch is considered by many collectors to be the first truly 300m-rated diver watch. The Z.R.C produced its diving line of watches from 1950 up to 1975 (three series) and what can been seen on the Cousteau documentaries, is the series 2 with the Bakelite bezel, the weird looking bracelet and the crown at 6 o’clock. This model was adopted quickly by the professional French divers such as the 3rd group of mine clearance divers based at Toulon, the famous Hubert commando unit, and from some Calypso divers. 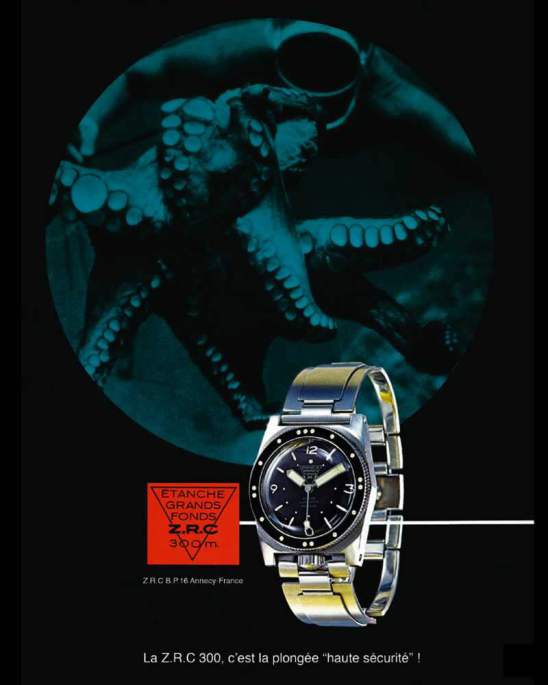 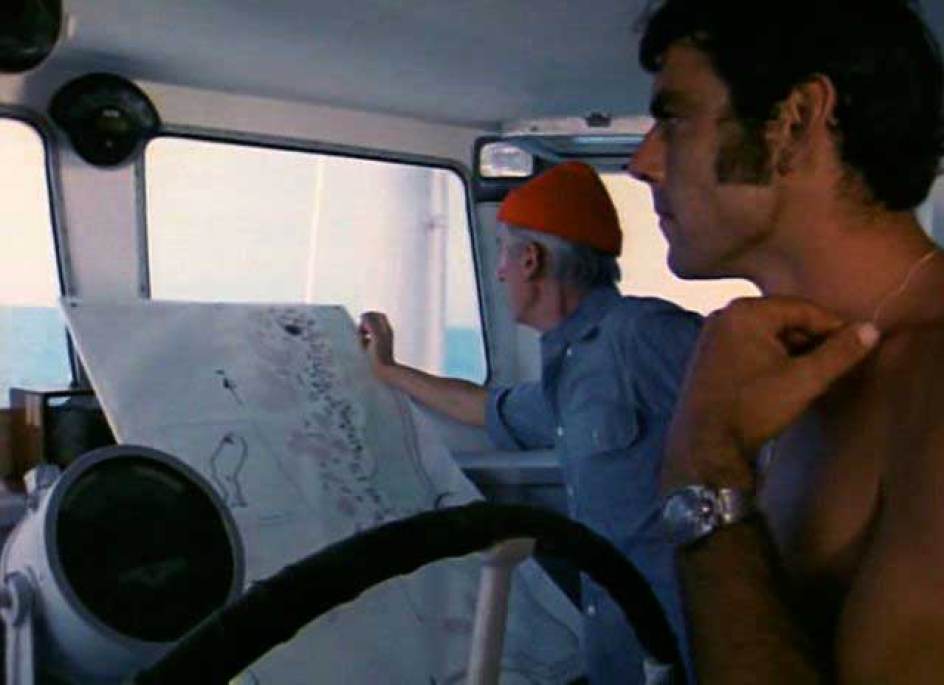 ZRC on the wrist of Claude Laperyre

Its innovations which included a magnesium housing for the caliber which made the watch anti-magnetic, the bracelet with two expandable links which enabled the watch to be fitted on top of the diving suit, and the crown position, an ergonomically sound solution that provided special security for the longevity of the watch underwater; these were unique features that created an excellent ‘purpose built’ diver. The watch can been seen on the wrist of Claude Laperyre, diver of the Calypso team and at that time it was more expensive that the Rolex Submariner.

The last three watches from this early period we are going to see in more detail are my favorite watches of all time; the Seamaster 300, the Aquastar Deepstar and the Depthomatic from Nivada. The Omega is considered one of the archetypal divers. Introduced in 1957 as a part of the holy trinity of sports watches by Omega (CK 2913,2914,2915 – Seamaster, Railmaster, Speedmaster). The early references CK2913, CK14755 and the transitional 145.014 cannot been seen although there might be some of the Calypso divers that wore them, after all the Omega was considered ‘the dive watch to own’ at that point, along with the early Rolex Submariners and the Blancpain. It was the ref.165.024 that begun Cousteau’s close and long lasting relation with the company as we are going to see. This Seamaster, issued to the Royal Navy as well, can be seen throughout the ‘World without Sun’ movie that documented the Conshelf II experiments. These specific watches were prototypes issued by Omega and they are marked on their caseback with CONSHELF II – RED SEA/63. 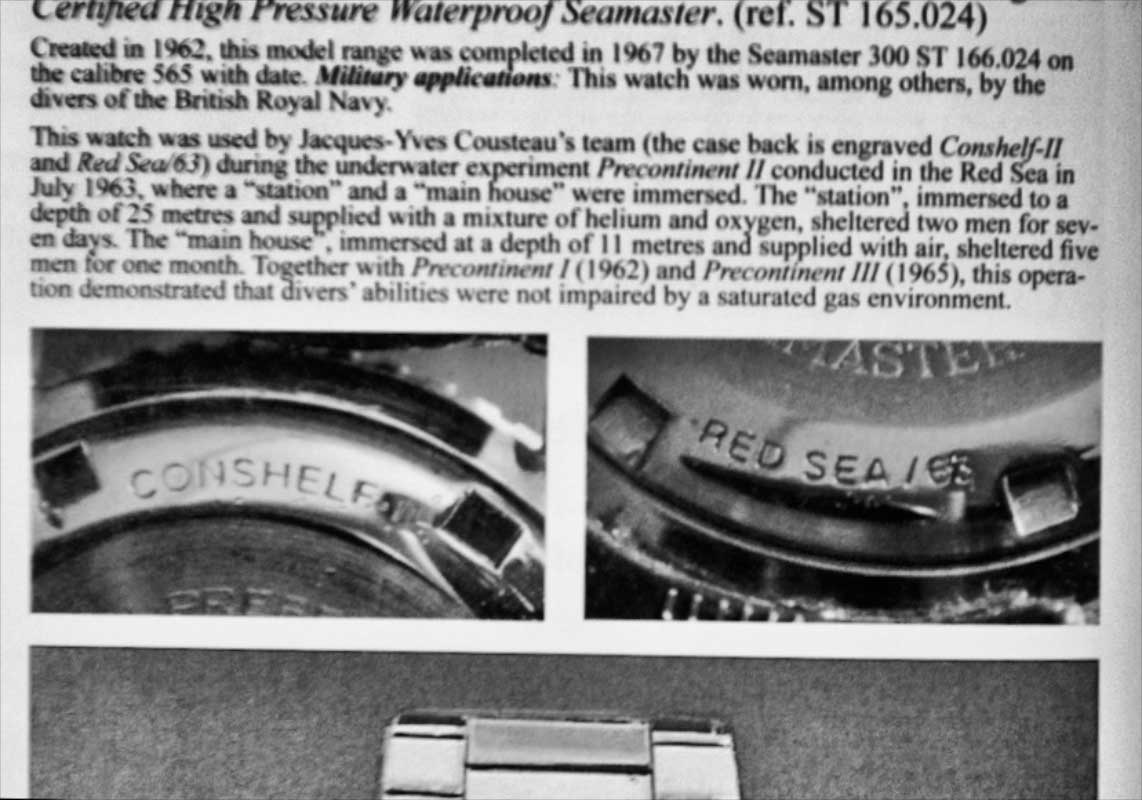 Aquastar as a whole is a company that in my humble opinion is very underrated. Founded in 1962 in Geneva and led by the chief Designer and diver Mr. Frederic Robert, (later went to Omega to help with their Seamaster series), the company produced watches which always had close ties with the sea; divers, chronographs, Regatta timers, etc. The company first produced the Seatime model which had a double operation crown (watch and internal crown functions) and with this 200m model the Cousteau relationship started to evolve.

However the Aquastar Deepstar can been seen more often. This model was a moderate sized 38mm chronograph, rated at 100m and during its lifetime it had the Valjoux cal.23 and the cal.92. With its distinctive design having a bidirectional bezel with decompression and dive time indications this diver chronograph can be clearly seen on the wrists of Philippe Cousteau or Raymond Coll on the Conshelf III experiments. Along with the Benthos heavy-duty divers, the Deepstar is extremely valuable and rare in today’s vintage watches market and perhaps one of the most closely associated watches with Cousteau. 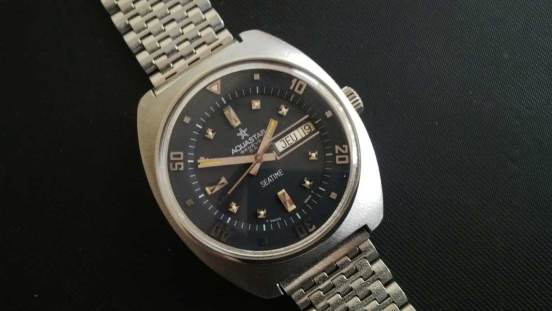 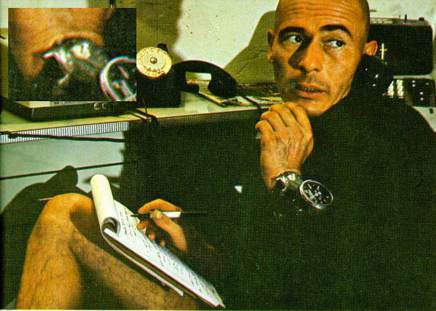 Raymond Coll wearing an Aquastar Deepstar in the Conshelf III 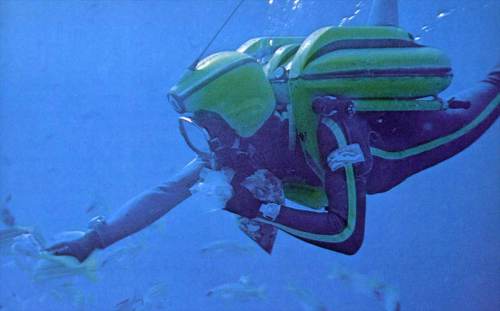 Finally, in this period Bernard Delmotte used to wear and can been seen quite often with a Nivada Depthomatic. Nivada, located at the town of Grenchen, was a medium size company, which however produced very interesting watches. Perhaps the most famous of them all was the Chronomaster chronograph. In our case the distinguishing characteristic of the Depthomatic was that it could function as a depth gauge by using the Bourdon tube depth gauge principle. Ambient pressure was transmitted to the mechanism of the gauge called a C- spring, which is a hollow spring in the shape of a C. The transfer of pressure from the tiny opening located at 3 o’clock straightens the spring and this motion transferred to the dial mechanism. The 38,5 mm case had a double-wall acrylic crystal and the watch housed the 17 jewels ETA cal.2451. Nivada used to make this watches also for LeJour and Favre-Leuba, as well. 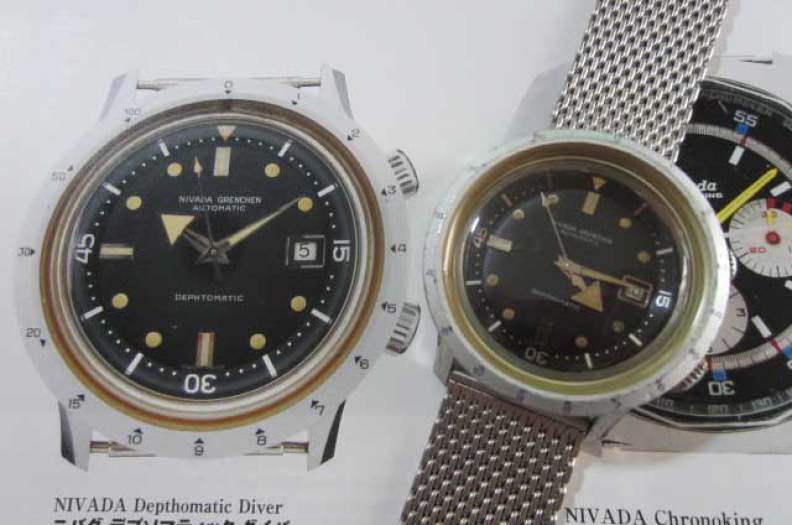 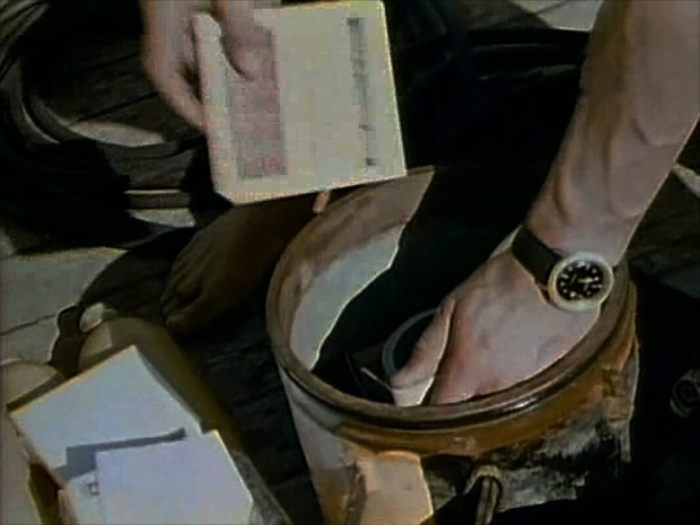 Nivada Depthomatic on the wrist

Cousteau and the Timepieces of the Calypso team – Part 1

Cousteau and the Timepieces of the Calypso team – Part 3
Tags: Articles 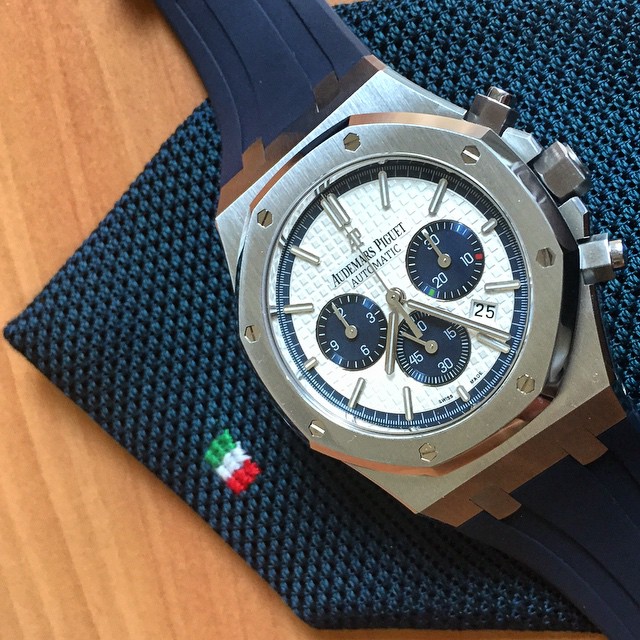