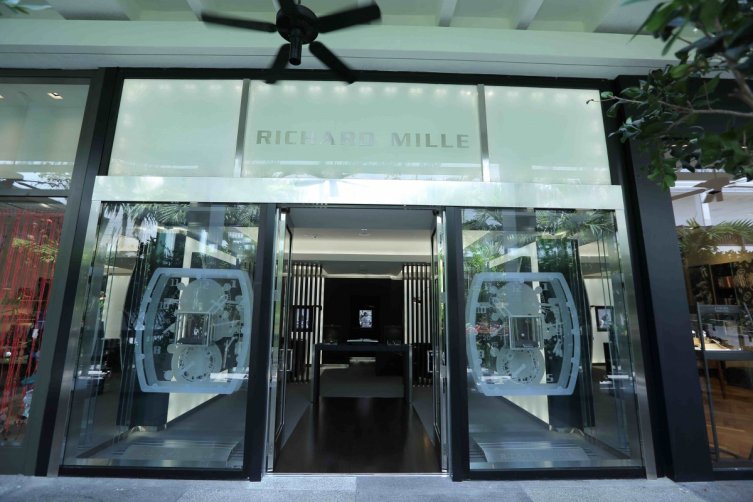 Quietly referred to as the “Billionaires secret handshake,” Richard Mille is one of the most exclusive Swiss watch brands in the world. With timepieces starting at $100,000 and heading right up into seven figures, only a select group of people can afford them. It is for this very reason that the new boutique opened in Bal Harbour very quietly this month. “It’s a very soft opening,” says Mille when we catch up with him having a coffee two doors down from his gleaming new Bal Harbour boutique.

“I always say in the higher segment of the market, we have to remain a bit mysterious. I don’t want to do what everybody is doing.” He definitely isn’t when it comes to openings, but judging by the people in the store, people who are supposed to know about the new boutique, find out. “My clients don’t want my watches on just anybody’s wrist,” he explains. Indeed they are not— the realm of Richard Mille owners is a very exclusive club.

As for the new boutique, the design is in keeping with the other boutiques around the world (this marks the 3rd in the US, 30th in the world). “It’s important for me to control the design,” says Mille who claims to love the process of design whether for watches or the interiors that will showcase them.

“The objective is to eventually have 40 boutiques, the next one is New York.” Details throughout the store include three panes of etched glass that are representational of the three layers of mechanism in the famously complicated watches. Display cases project from the wall mimicking the profile of the famous shape of the case.

He is happy to be in Bal Harbour and loves Miami in general. “Miami is full of life, and I love that.” It’s also a great place to engage in the sports that Richard Mille watches are perfect for. In fact, if brand ambassadors can’t play their sport while wearing their Richard Mille, they won’t get the contract so Nadal wears his timepiece on the court ditto pro golfers Cristie Kerr and Bubba Watson who wear theirs on the course.

“It’s the best regatta in the Caribbean today, the level is unbelievable.” says Mille of the the Voiles de Saint Barth. The brand is a sponsor for the event because he feels the values and principles of high-level racing dovetail with the extreme engineering that goes into his watches.  He has just returned from event, which took place last week on the island April 13-18.

“Every year George David’s Ramber 88 wins, and every year he gets a Richard Mille watch. I’m getting to know him from being up there on the podium with him so I said to him, ‘Soon you’ll be able to open your own boutique!’” said the watchmaker with a laugh. “Everyone is getting fed up because he’s always winning.” Mille has created a special edition Richard Mille time piece for the regatta with a white rubber strap priced at $160,000.