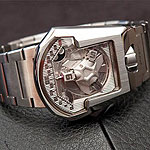 Since I started writing my thoughts and ideas about watches on my blog, Fratellowatches, I have been visiting the big watch fairs like Baselworld and the SIHH in Geneva. Sometimes, one comes across some very odd-looking watches at these fairs — watches that perhaps should not be defined as watches, but as mechanical art or — as MB&F’s Maximilian Büsser puts it — horological machines.

These unusual timepieces tend to have a few minor setbacks for most enthusiasts. With a few exceptions, they tend to be a bit uncomfortable on the wrist. Their large and/or unusually shaped cases make them hard to wear under a cuff, and hard not to bump into everything you come across.  Sometimes legibility is more or less the issue; without explanation or demonstration, it might take you quite a while to figure out what time it is on one of these watches.

Perhaps the most serious concern for the average luxury-watch consumer are the price tags on these unusual timepieces. Although surveys tell us that our readers have some money to spend on luxury items, prices that equal that of a nice villa with a few acres of land might be a bit daunting for even the highest horology budgets.

WatchTime’s Mike Disher offered his list of “Off the Beaten Path” timepieces last week and in the current issue of WatchTime. Here are the top five unusual timepieces I would like to share with you. They are not picked or ranked on price, shape or color but on the “Oooh” and “Aaaah” effect they had on me I saw them for the first time.

The first time I laid eyes on The Palace by Jean Dunand, created by Christophe Claret, I was told that my eyes became bigger as soon as Thierry Oulevay (CEO of Jean Dunand) revealed it. This timepiece was introduced during Baselworld 2010 and made a huge impression on me. At first sight, especially in photos, this watch might look a bit clunky and strange. But the strength is in the details. This watch is based on the Art Deco style of the period in which artist Jean Dunand lived, characterized by streamlined and geometric shapes. It also utilized modern materials like chrome, stainless steel, and inlaid wood. The Palace timepiece makes you relive the period in that very period in which Jean Dunand worked and lived his life. The Palace includes a lot of neat referrals to  the Eiffel tower, skyscrapers, racetracks, et cetera.

A detailed overview of this watch can be found here.