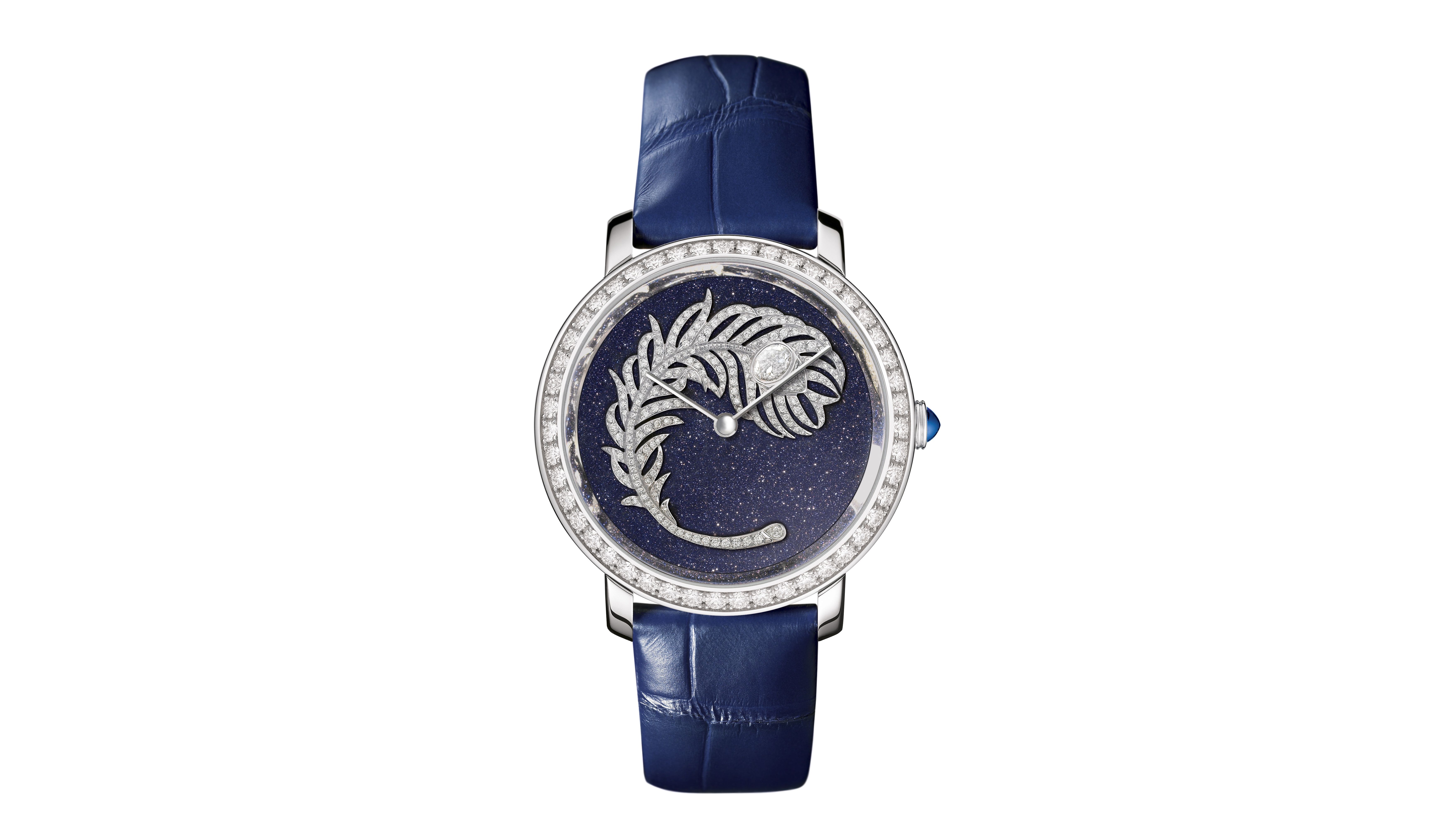 Paris shines, and never more than during the summer, when it hosts fashion week. For several years now, it shines literally, as the most prestigious High Jewelry Houses in the world join those from Haute Couture to present their own new collections. Place Vendôme, Avenue Montaigne, and Avenue George V open their doors to show off their latest jaw-dropping creations of high jewelry.

Boucheron invites us to dream of India and the Maharaja of Jodhpur, under whose patronage this new Bleu de Jodhpur collection is presented. Known for its unique blue buildings and intense light, the city of Jodhpur is reflected in this “Epure Plume de Paon” (Epure of a Peacock Feather), with its 41mm white gold case encircling a diamonds and aventurine dial seen through the sapphire crystal. The case-back is engraved with Boucheron’s famous “Je ne sonne que les heures heureuses” (I count only the joyful hours). Cherry on the cake, the sapphire caseback reveals the oscillating weight and 40 hours power reserve automatic movement from the Manufacture Girard-Perregaux. The case is complemented with a blue alligator strap.

Rome-based Bulgari is always at home in the French capital. This “Geometry of Time” timepiece from the Italian Gardens collection at Bulgari begs to be caressed, as CEO Jean-Christophe Babin told us that “Bulgari is not only a pleasure for the eyes, but also for the skin”. Smooth! This one-of-a-kind timepiece from the four unique pieces that comprise this collection features a snow-set pavé dial with 190 brilliant-cut diamonds. Its fully articulated bracelet is composed of 354 brilliant-cut diamonds weighing 8 carats, 56 buff-top cut sapphires weighing 6.3 carats, 2 round-cut sapphires weighing 1.2 carats, 4 takhti-cut sapphires weighing an additional 13.7 carats of sapphires, 2 takhti-cut rubellites for a total of 1.4 carats, 20 rubellites for an additional 1.2 carats of rubelites, and 98 elements in mother-of-pearl! Quartz movement.

The founders of Chaumet were official suppliers to Napoléon I. They designed and set his coronation crown, and created the wedding jewelry for his marriage with Joséphine de Beauharnais. Chaumet’s new Joséphine High Jewelry collection includes this ‘Secret Watch’ from the “Rondes de Nuit” theme. Its construction and materials reflect the dual nature of Joséphine – strong Empress on the outside and feminine to the extreme within. A white gold jewelry secret watch, it is paved with 644 brilliant-cut diamonds weighing 5.55 carats, 38 baguette-cut diamonds for 2.15 carats more, plus a 0.41 carat pear-shaped DVVS1 diamond. Upon gently pivoting the diamond-set cover, time is delicately revealed on a white seawater mother-of-pearl dial. Run by a high-precision Swiss quartz movement.

In the case of Harry Winston and their “Haute Horlogerie Jewelry creation”: the “Premier Hypnotic Star Automatic 36 mm”, invisible has never been so visible. Invisible settings of 84 baguette-cut diamonds and 108 baguette-cut spinels form star shapes in a three dimensional effect that completely cover the white gold dial. The twelve tips of the star motif provide the markers to read the hours. In the center of the dial, instead of a seconds hand, a star spins on its axis. Invisible settings of 161 baguette-cut and four brilliant-cut diamonds also cover every facet of the white gold case; there is no visible metal from any angle. Only an open caseback reveals the rose gold oscillating weight of the mechanical automatic movement. A black satin strap completes this Harry Winston creation. It has an 18k white gold buckle, with 28 baguette-cut diamonds, invisibly set, of course.

Following Louis Vuitton’s Art Deco inspired Acte V High Jewelry Collection in 2014, this summer’s second part: Acte V / The Escape Collection is a deliberate swing to the Streamline Moderne look, bringing horizontal lines and curved shapes influenced by aerodynamics and new materials. The collection shows off Paraiba and rare-colored tourmalines, Australian Opals, black opals, bright emeralds and sapphires, onyx, spinels, rubies, violet sapphires, grey pearls and Akaya pearls. The hallmark of the collection is still the “V” motif, but this time it is more fluid, as shown on this timepiece: “The Majestic” no less, in white gold with a total of 678 diamonds for 14.55 carats set on the case, strap and opal dial. Quartz Movement.