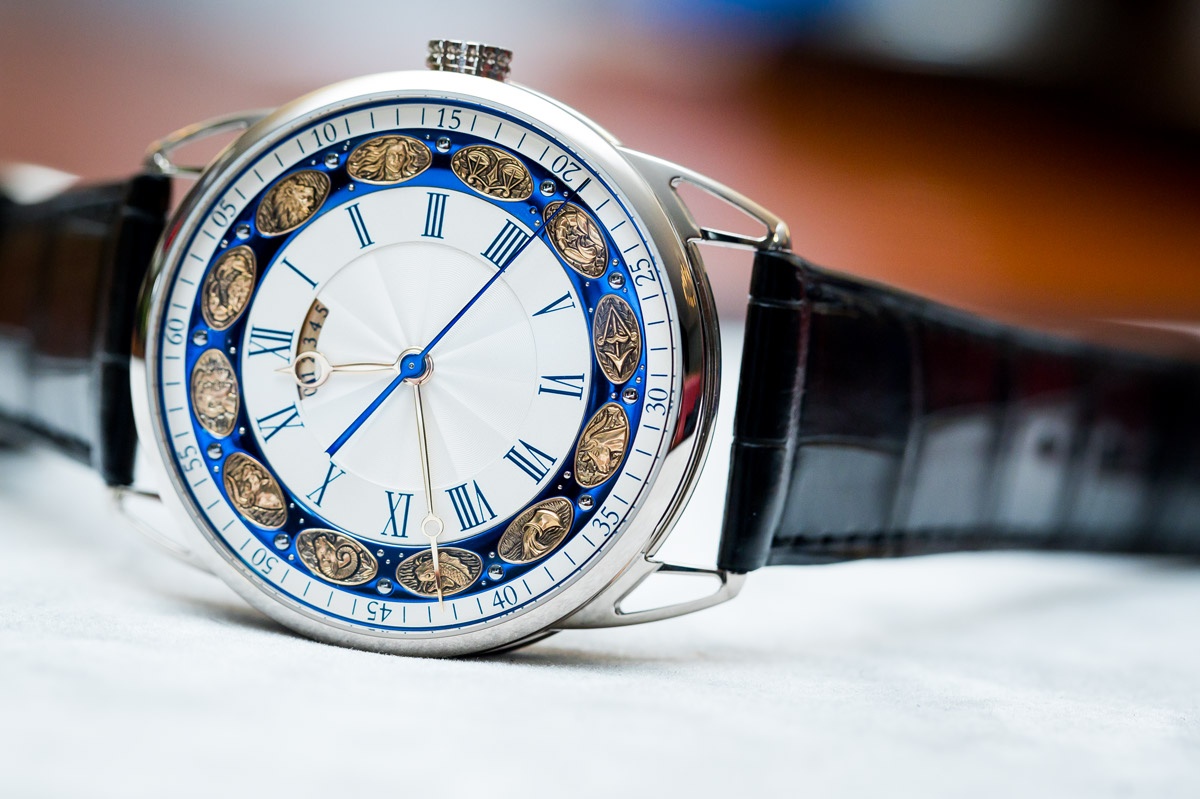 A small independent brand, De Bethune melds modern and traditional watchmaking together into its own distinct aesthetic. By now, you should know we’ve been huge fans of their philosohpy, fyling out all the way to Mexico and the Salon Internacional Alta Relojeria (SIAR) 2014 to see the De Bethune DB28 Skybridge, the De Bethune DB28 Digitale, and the De Bethune DB28 Maxichrono. But De Bethune is also a full-fledged manufacture, priding itself on its research and development, inventing and developing of new horological techniques.

De Bethune introduced the DB25T Zodiac on the frindges of SIHH 2015, focusing on aesthetics this time around by incorporating the signs of the zodiac, hand etched in gold around the dial by artist Michèle Rothen and laid against a blued titanium “sky” dotted with stars. A smaller concentric circle clocks the time with open-worked yellow gold hands reflecting off the gold colored astrological symbols rounding black Roman numeral hour indicators. A blued seconds hand pops out to echo the sky as it rounds the dial. Completing the shimmery theme of the night sky is the silver-toned guilloché decoration radiating from the center of the dial. Between 11 and 1 o’clock, an arcing aperture signals if the movement is running.

The only hint for those not inaugurated into the world of De Bethune that this is a deeply technical watch is the jumping seconds. Turn over the watch to find the workings of this complex and classical mechanism of the double gold wheel driven by a double lever with four pallets. The hallmark De Bethune Deltoid bridge decorated with “Côtes De Bethune” motif supports the central seconds.

Another hidden surprise is the proprietary tourbillon escapement of the DB2109 movement running the show. Composed of silicon and titanium, the tourbillon is one of the lightest on the market, rotating once every 30 seconds at 36,000 vph. So light are the tourbillon components that the heaviest is only 0.0276 grams, while the lightest weighs 1/1,000,000 of a gram. This movement packs a punch with two barrels providing 4 days of power reserve.

In a 44mm white gold case and hallowed lugs, another De Bethune trademark, De Bethune’s Zodiac watch comes on a navy blue alligator strap with pin buckle. Day or night, this watch is a beautiful way to gaze into the stars.