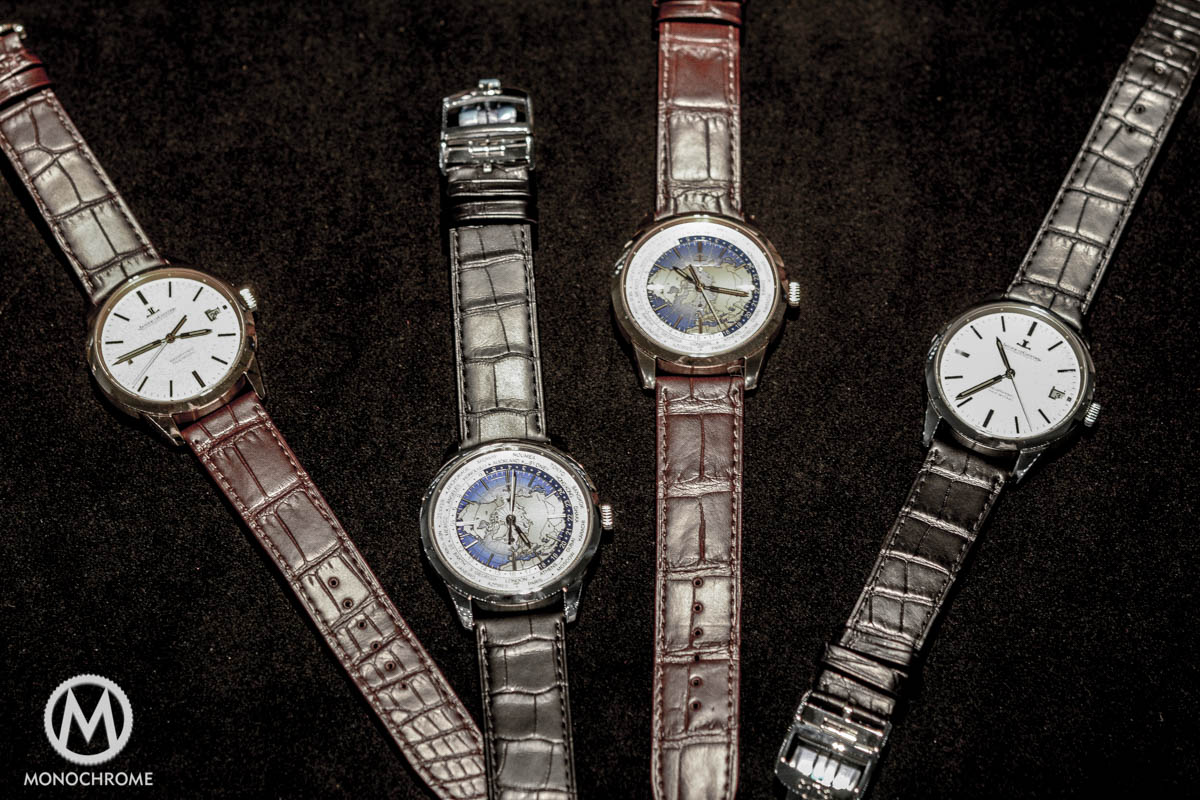 Last year Jaeger-LeCoultre introduced the Geophysic 1958 in three limited editions, and today the maison comes with four new models of the new Geophysic collection. The limited editions of last year have all been sold out (rather quick!) and while nobody had foreseen that JLC would turn the Geophysic into a new collection, that’s exactly what they did. And they added some interesting horological content to this new collection, that somehow perfectly fits the bill. Shortly before the official release, we had the chance to get some hands-on experience. Let’s have a closer look at the Jaeger-LeCoultre Geophysic True Second and Geophysic Universal Time.

The Geophysic 1958 was heavily inspired on the original vintage models – or we could say a reissue that’s very true to its origin. Like it’s ancestor it sported similar tool-watch features, like a soft-iron inner case to protect the movement from magnetic radiation. We covered the Geophysic’s history (and legacy) extensively in our hands-on review of the Geophysic 1958. All four new models come with a true second complication, as JLC named it; a complication that is usually referred to as dead beat seconds or seconde morte in French. And yes, that’s a typical tool-watch addition, because it allows for more precise time measurement. To be clear: this does not mean that this dead beat seconds complication, or True Second as JLC calls it, makes the movement more precise! It means that a ticking second hand, instead of a sweeping second hand, makes it easier to precisely read the time or synchronise the watch with another timing device. This is something that was mainly used in clocks and pocket watches that were used for extreme precise timing. 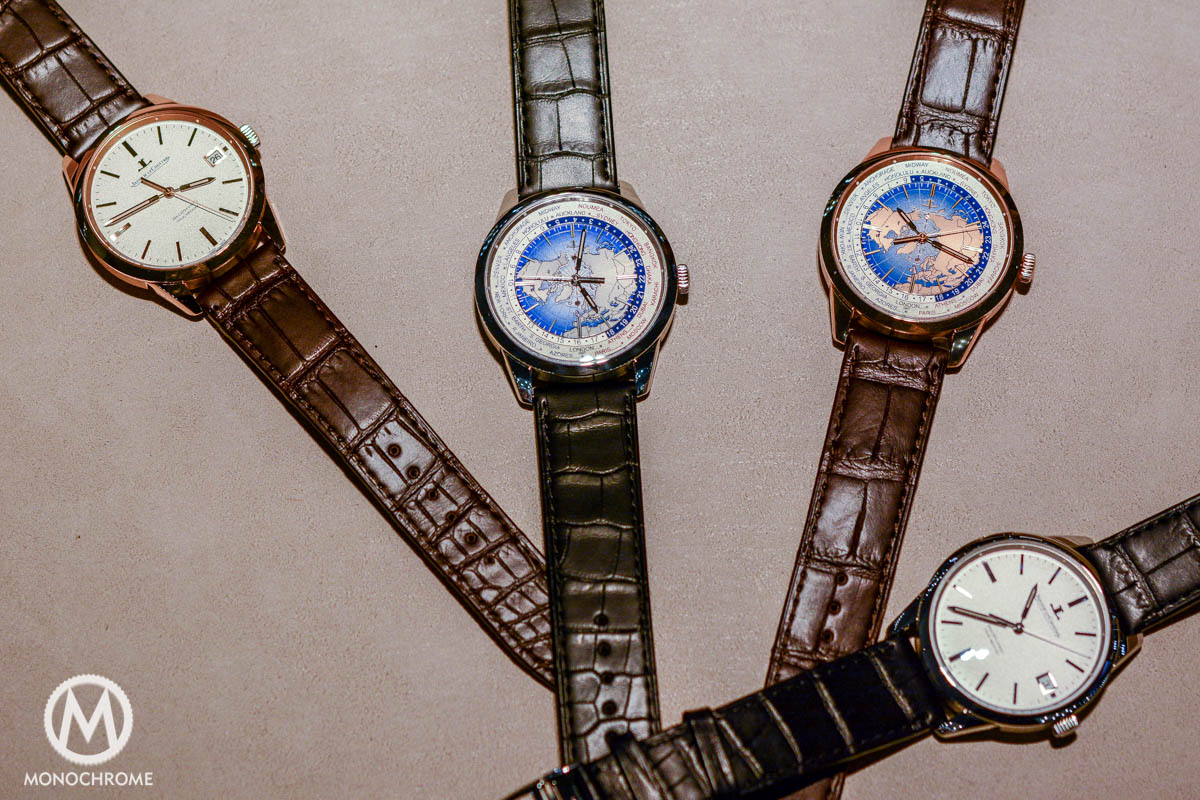 The dead beat seconds, true beat seconds, seconde morte or True Second remains a very interesting complication. The horological background is firmly rooted in precision timekeeping and only a few watchmakers / watch brands have the courage to introduce watches with a second hand that ticks like a quartz watch. Think of Grönefeld with their award winning One Hertz, Arnold & Son who have featured this complication in a number of watches, Habring² with their Jumping Seconds, and even Jaquet Droz who surprised us earlier this year with their Grande Seconde Morte. Here at Monochrome we just love mechanical timepieces with this complication, for its typical horological roots.

Dead Beat Seconds or the @jaegerlecoultre True Second was not created to make a watch more precise, but to… Click To Tweet

However remember, this was not developed to make a watch more precise, but to make reading the time more precise. In fact, if the complication is not designed properly, it will make a watch less precise! Not to worry about that, because Jaeger-LeCoultre have found a solution (by means of an additional spring) that has no negative influence on the amplitude of the balance.

Talking about the balance, in the image above you can see that it is shaped differently from 99.9% of all balance wheels out there. Pretty much all balance wheels are round. However in 2007 Jaeger-LeCoultre came with Extreme LAB 1 and in 2010 with the Extreme LAB 2 (we did a hands-on with the new version that was introduced last year), and these two limited editions all featured a new lubricant-free movement and a non-circular balance wheel. This non-circular balance wheel has less air friction that the regular round balance wheel, and that saves energy and wear. Furthermore, it makes the watch (potentially, theoretically) more precise.

The four new models in the Geophysic collection comprise two models, one in stainless steel and one in 18k pink gold, with the name Jaeger-LeCoultre Geophysic True Second. This model has the looks of a classic dress watch, although your non-horological friends will think you’re wearing very pretty, but a battery-powered, wrist watch. Either try explaining it, or just show the watch’ reverse side so they can admire the nicely finished in-house movement with solid pink gold rotor (crafted from a single block of solid gold) with the Jaeger-LeCoultre logo. Whether you have horological knowledge or not, everyone will recognise quality and craftsmanship like that! 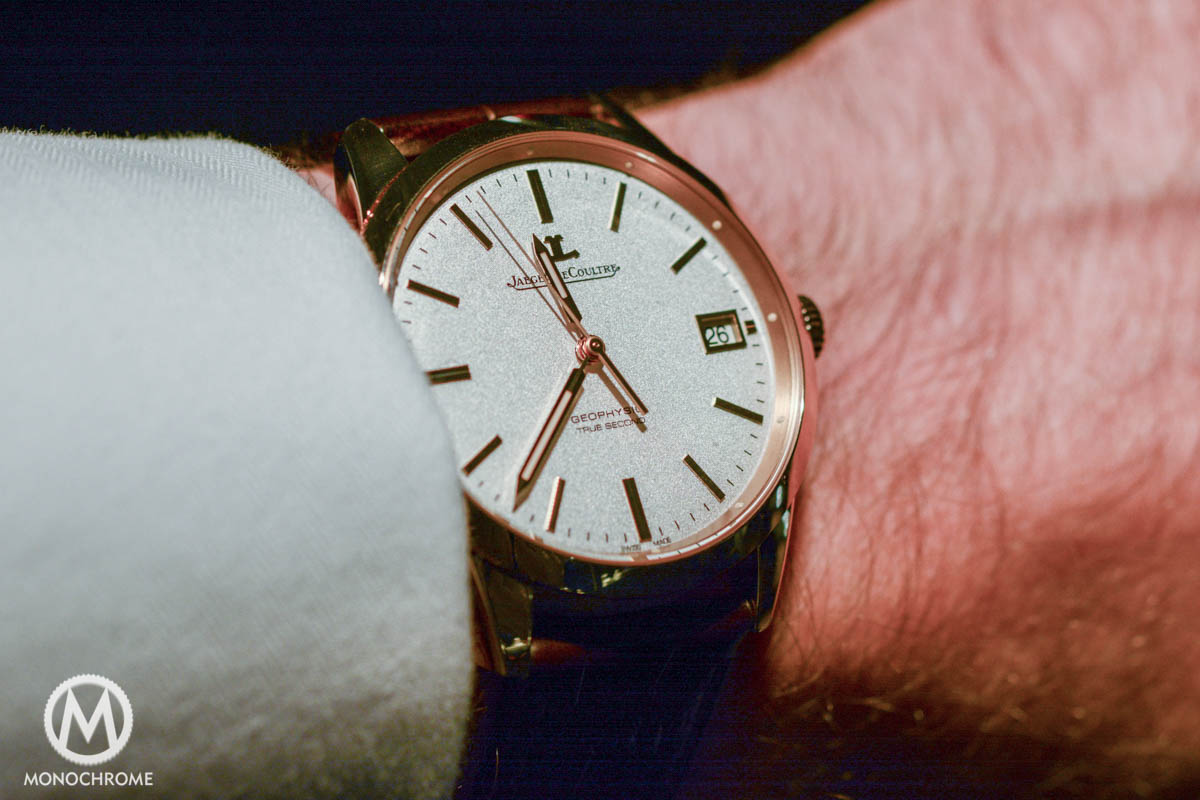 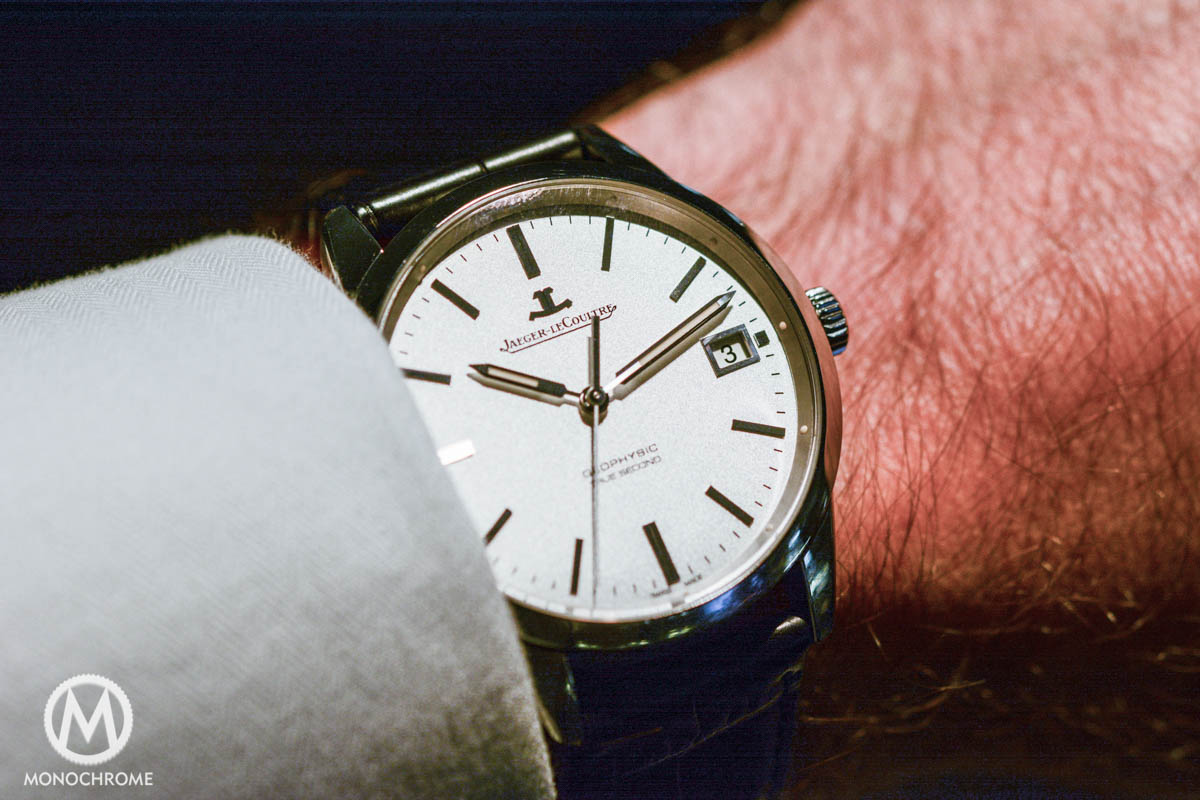 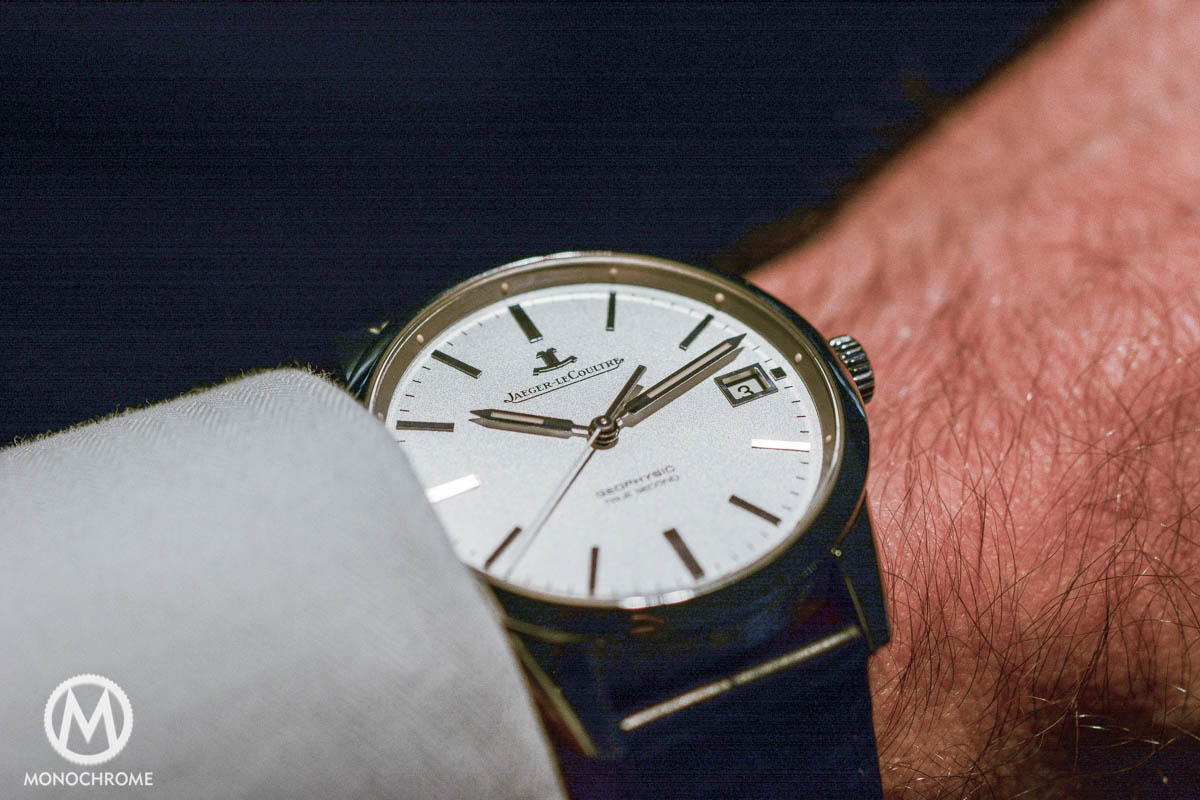 With a diameter of just under 40 mm (39.7 mm to be precise) is very nice on the wrist, and with a thickness of 11.7 mm it has some heft as well. And that’s something that goes very well with the nature, and heritage, of this collection! An ultra-slim wrist watch would not make any sense for a technically-inspired collection.

The finishing of the case is very nice, with satin brushed finishing for the side of the case, and polished finishing for all parts facing upwards (bezel, lugs). The bezel is very narrow, so that leaves a lot of space for a large open and clean dial. An interesting detail that also befits the technical heritage of the Geophysic: luminiscent hour marker dots in the rehaut (this is the ring between the dial and the bezel/crystal) around the dial. 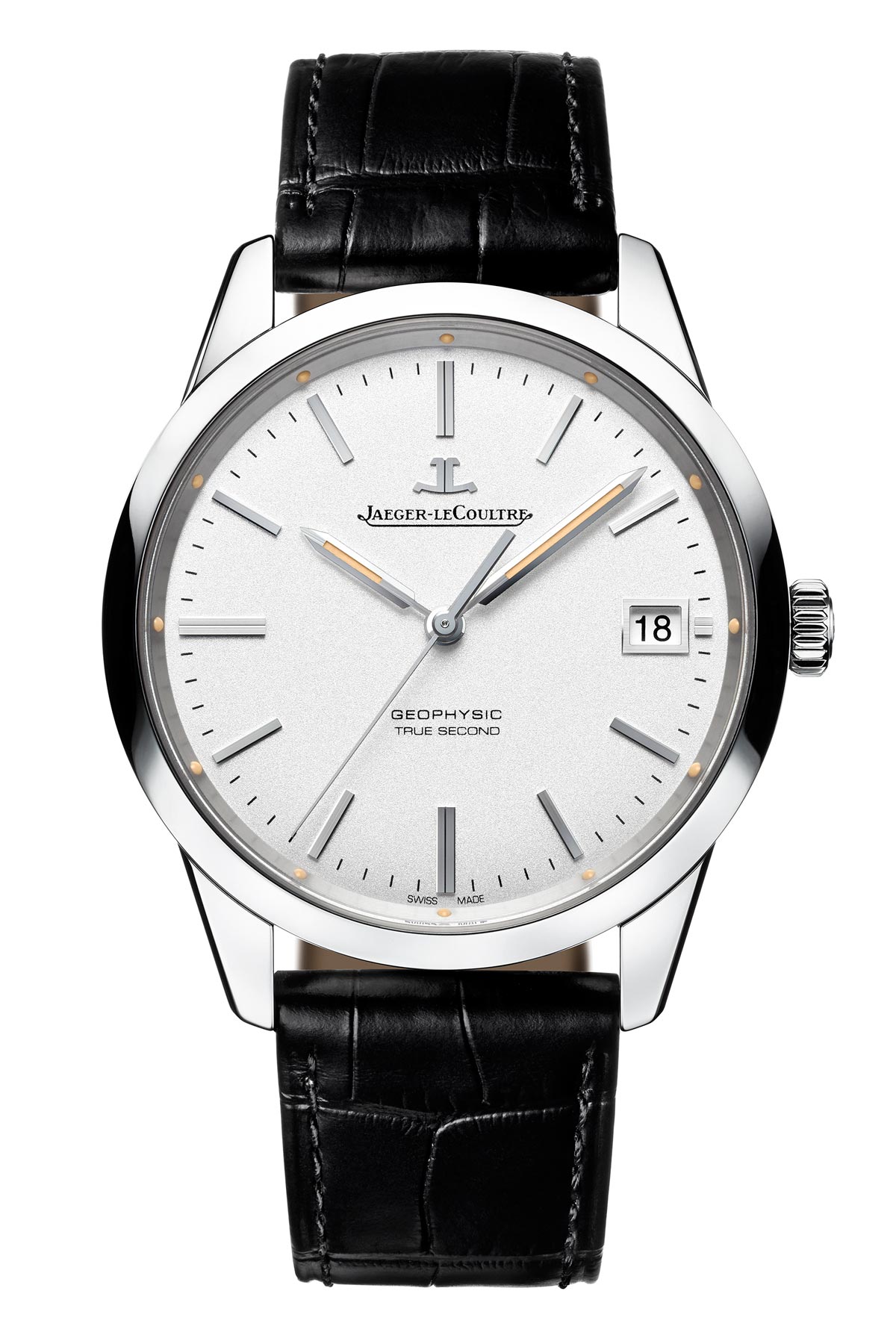 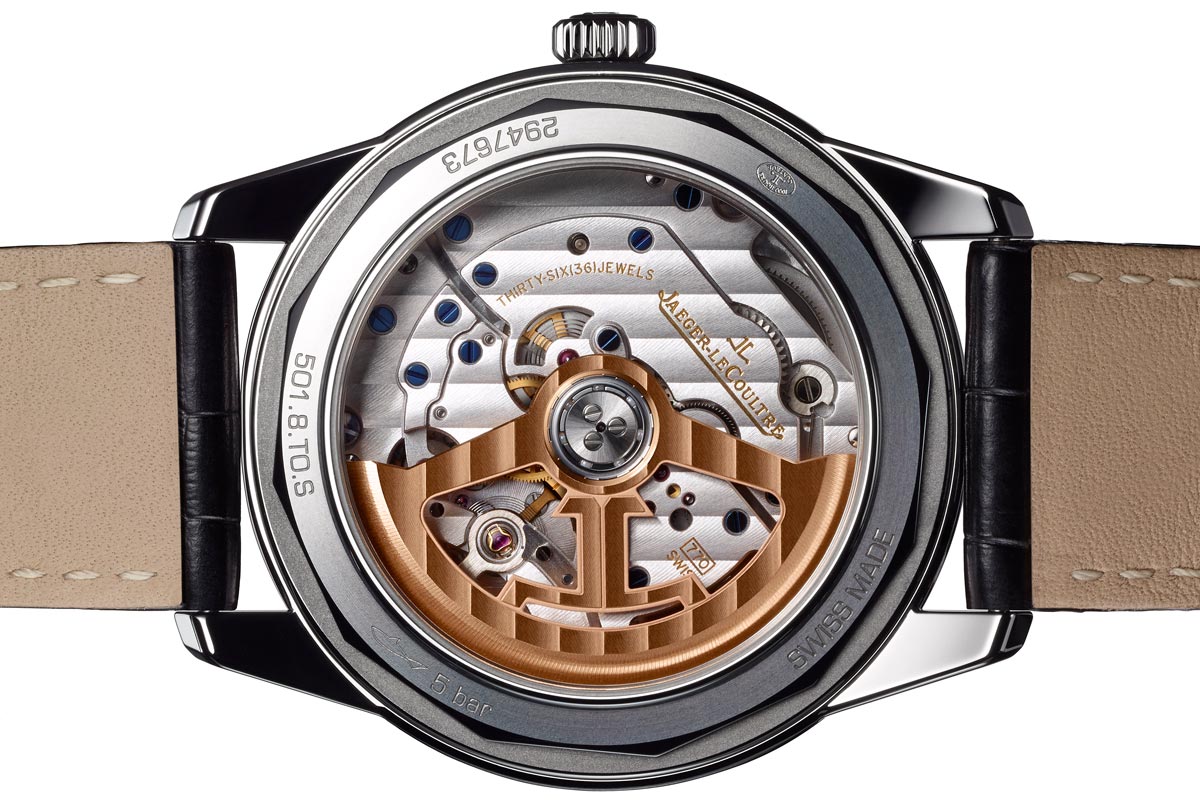 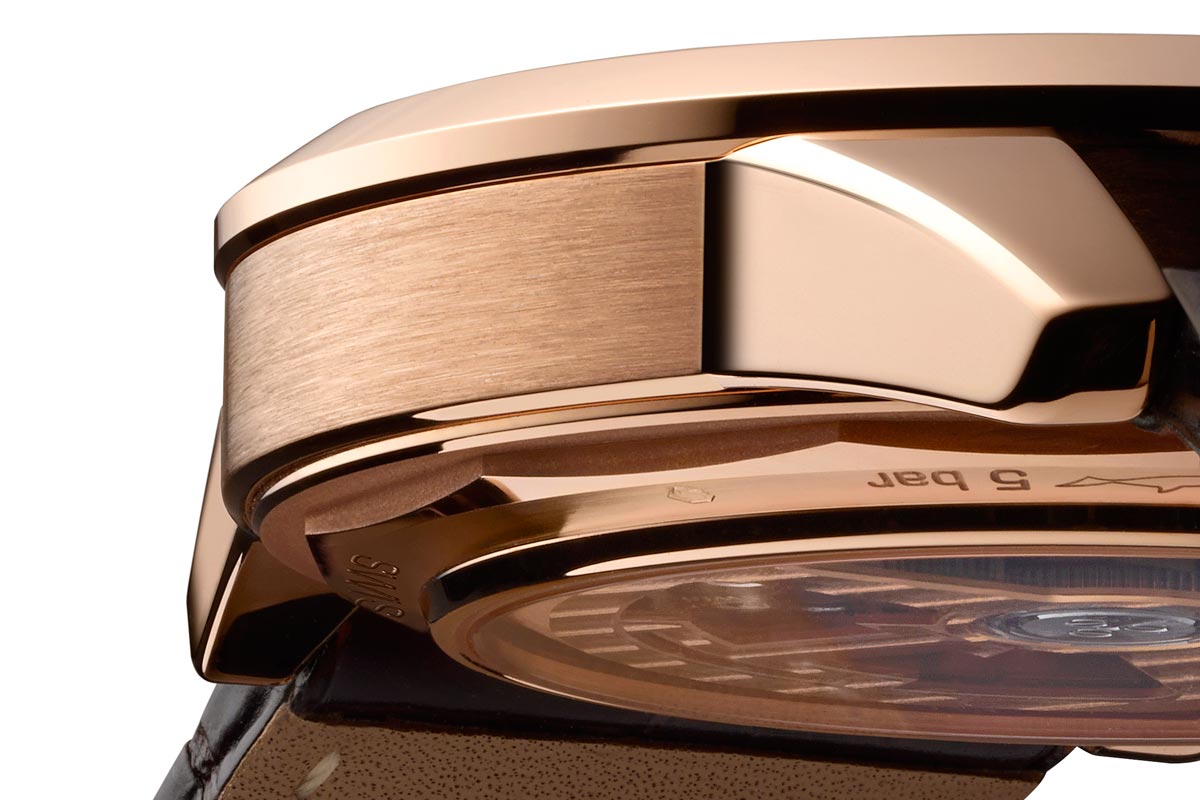 The luminescent material of these dots, and as used in the hour and minute hand, is in a ‘vintage’ creme colour. The entire watch, its size, its looks, and its horological content, all align very nicely, and add up to a classical every day watch with interesting horological content. It would make a perfect daily ‘beater’ (pun intended, with the ticking second hand) for every white-collar worker.

Oh, one thing in particular stood out: when the crown is pulled one notch, you can set the hour hand, without moving the minute hand. The date will adjust correspondingly. Super smart, for when you travel through time zones!

Two more models, both part of the new Geophysic collection, and both also feature the same True Second complication as the models that go by that very name. The Geophysic Universal Time adds a stunning world-time complication to the mix and that could well make this the perfect globetrotting white-collar worker’s watch. Do you have offices around the world, or are you in contact with people from around the world? Honestly, a worldtimer is such a great complication, now the world has become a global village. 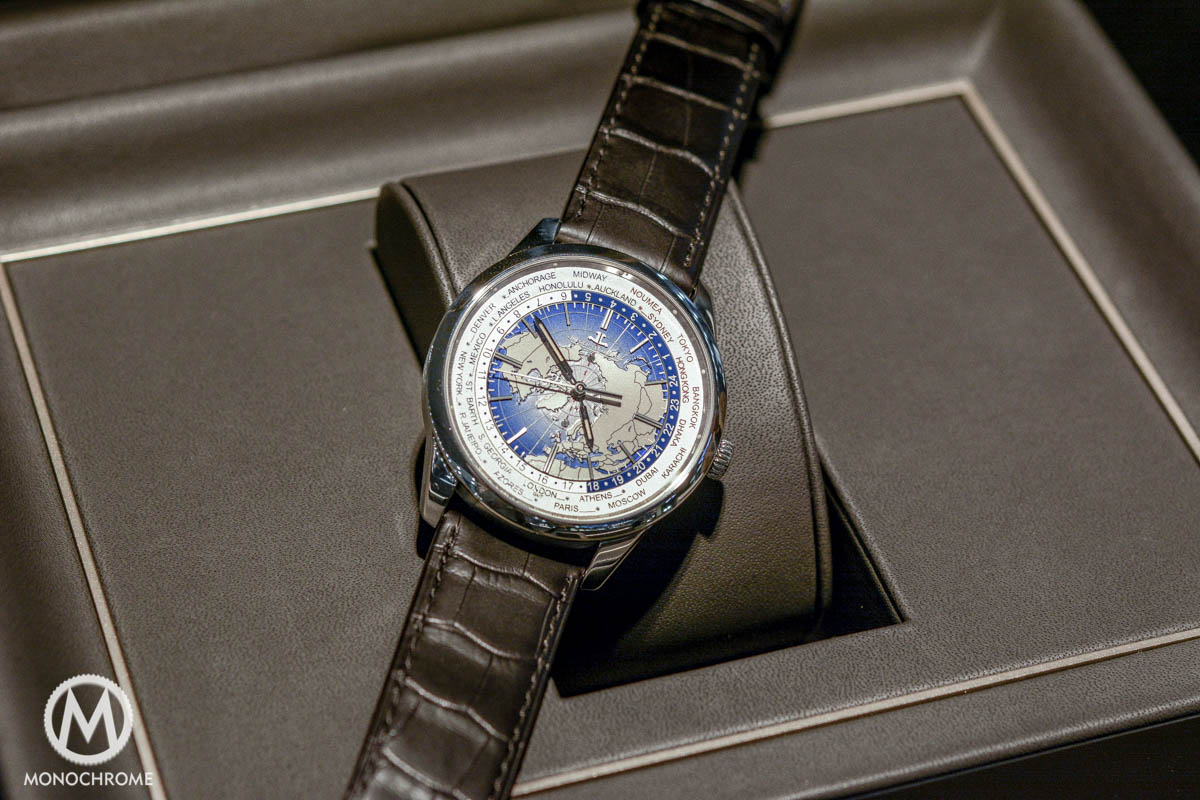 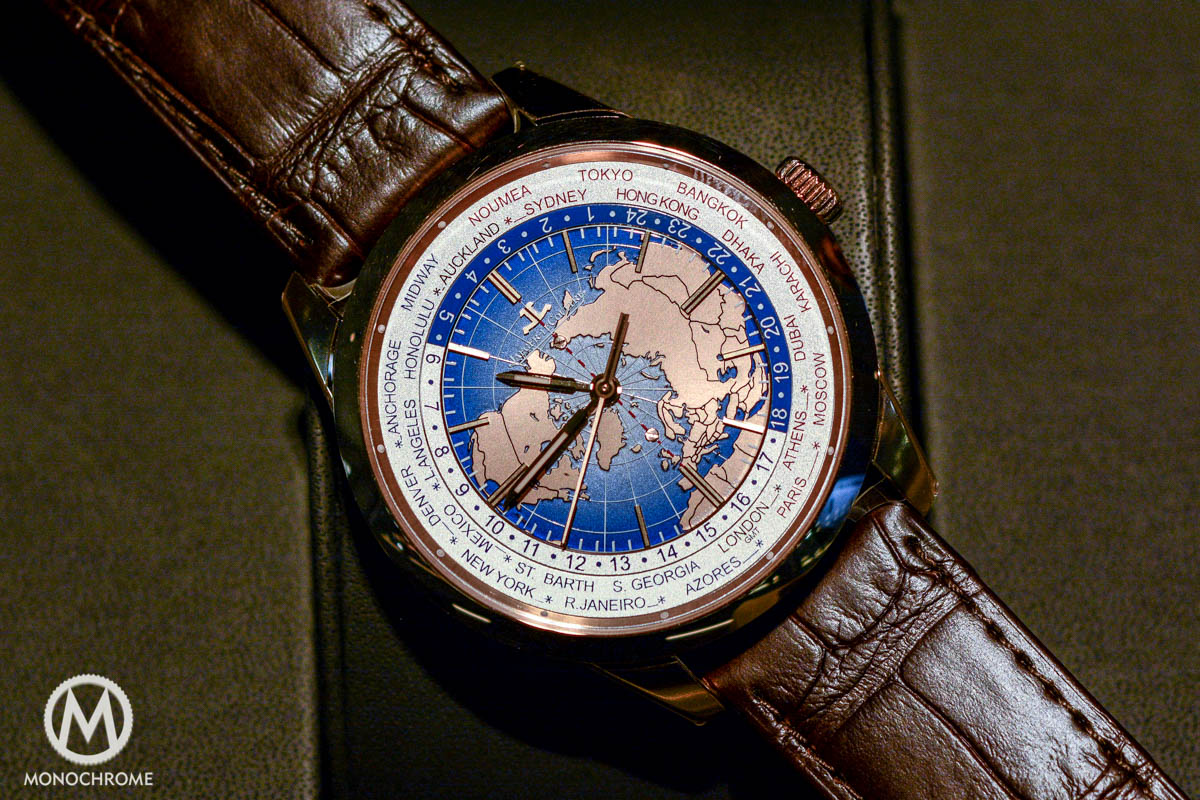 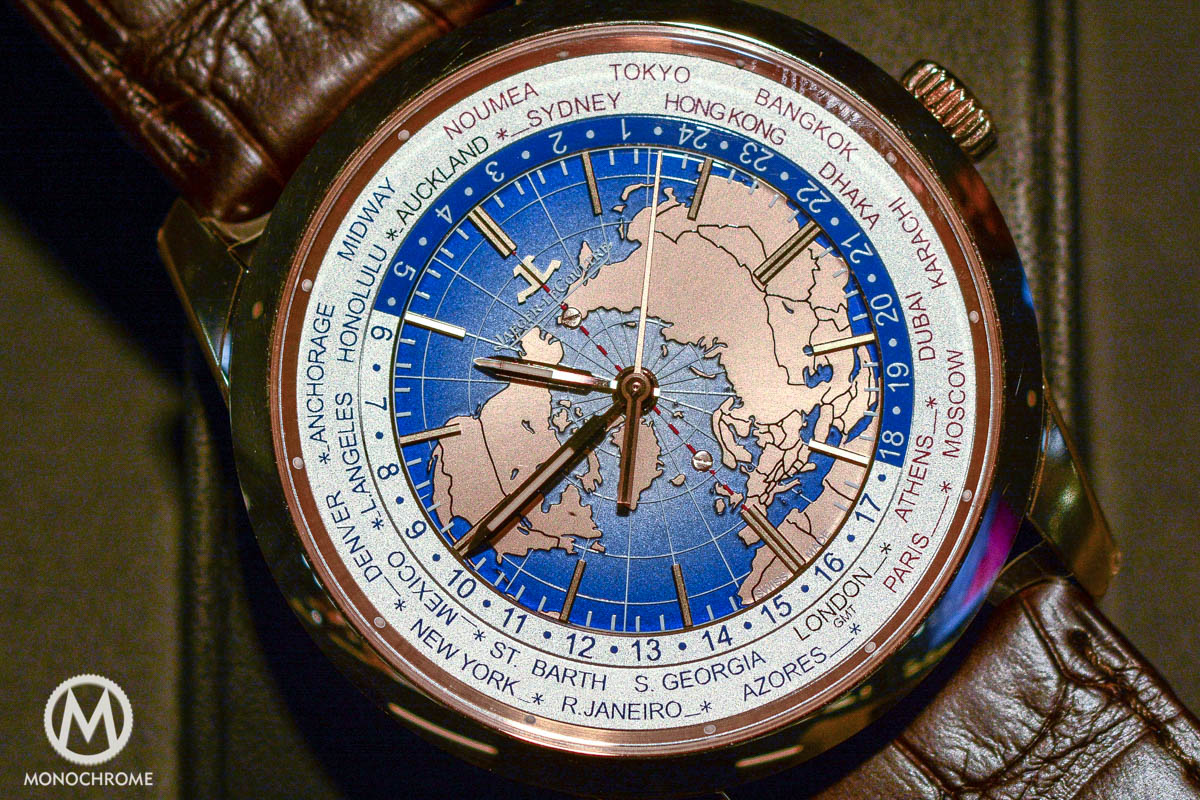 Jaeger-LeCoultre has done an outstanding job on this one, as it packs a worldtimer, the True Second and a similar beautifully finished case and movement… and a stunning dial! And like the Geophysic True Second, it also allows to adjust the hours without adjusting the minute hand. The time is adjusted via the crown (so not with a separate pushbutton) and once the universal time has been set, there is no need to adjust it while crisscrossing the world. The only adjustment you have to make is for your own local time. And that can be done easily by moving the hour hand forwards or backwards, independently of the minutes and seconds to as to avoid any loss of precision. 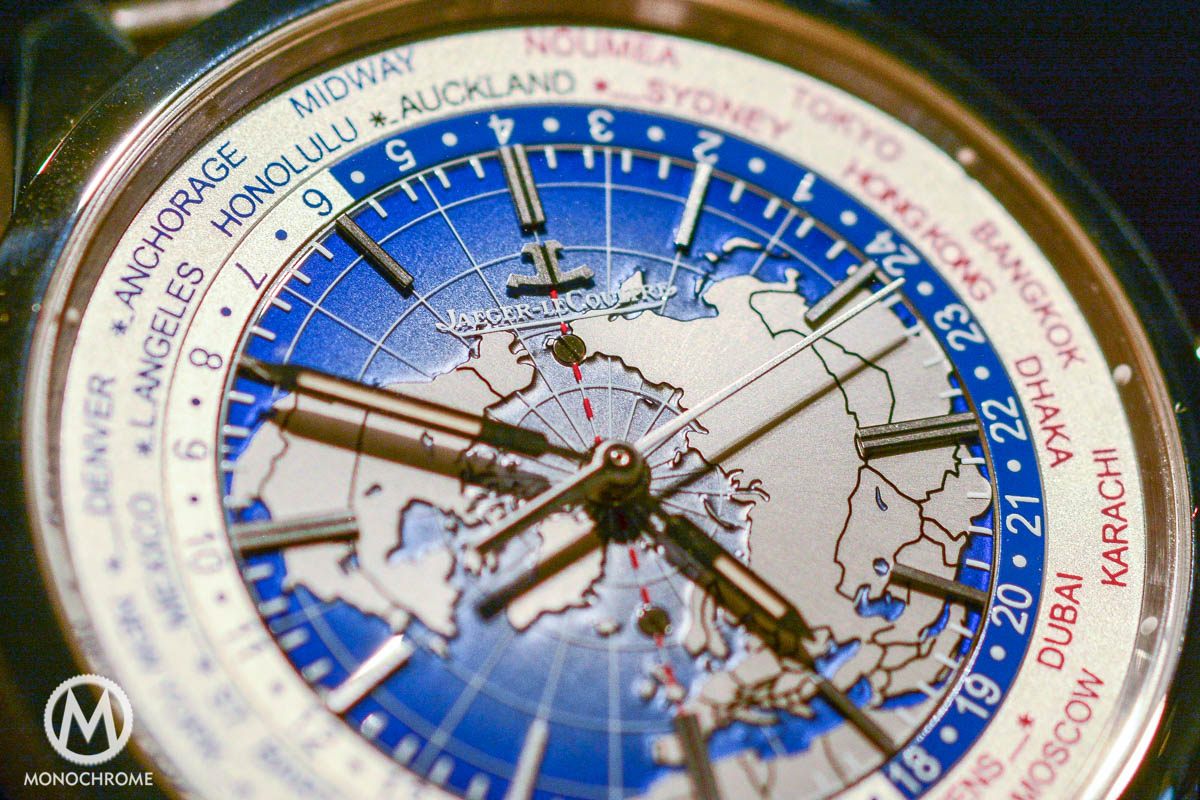 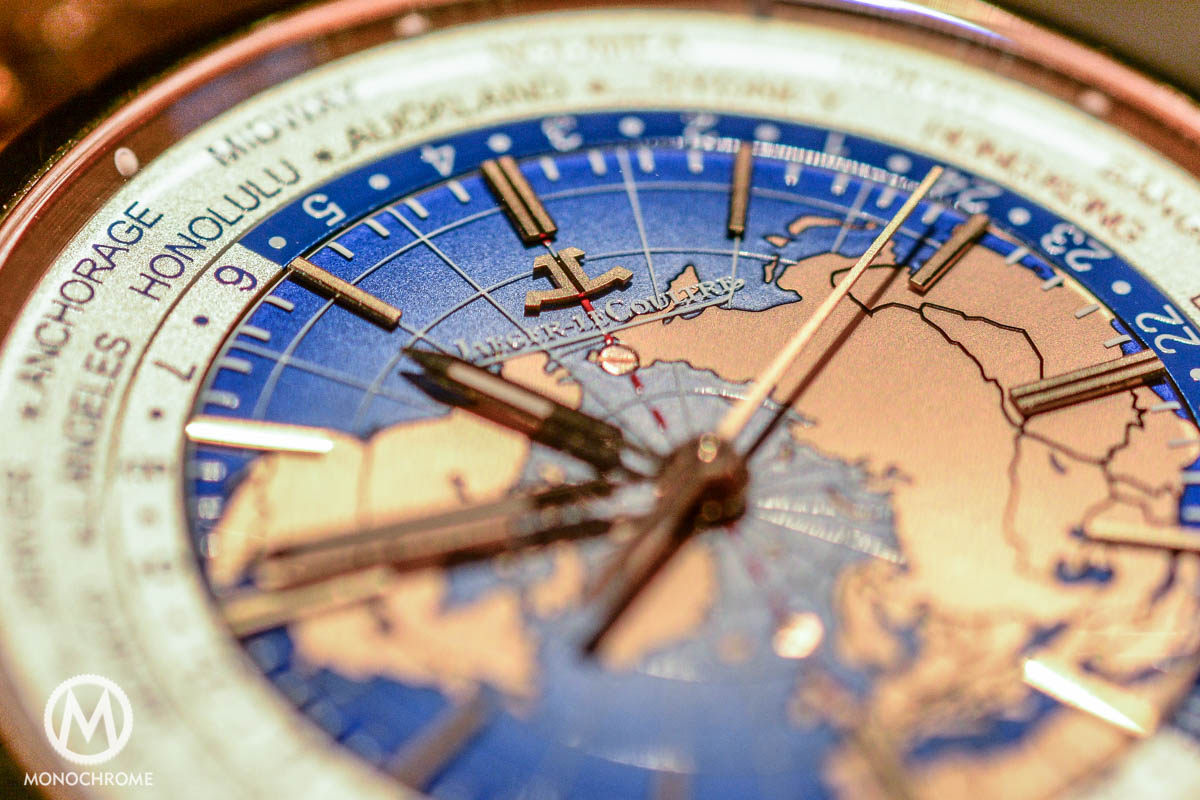 Based on my first hands-on experience I think Jaeger-LeCoultre delivers a very nice new collection, beautifully styled, very nicely finished, and with a lot of interesting horological content. 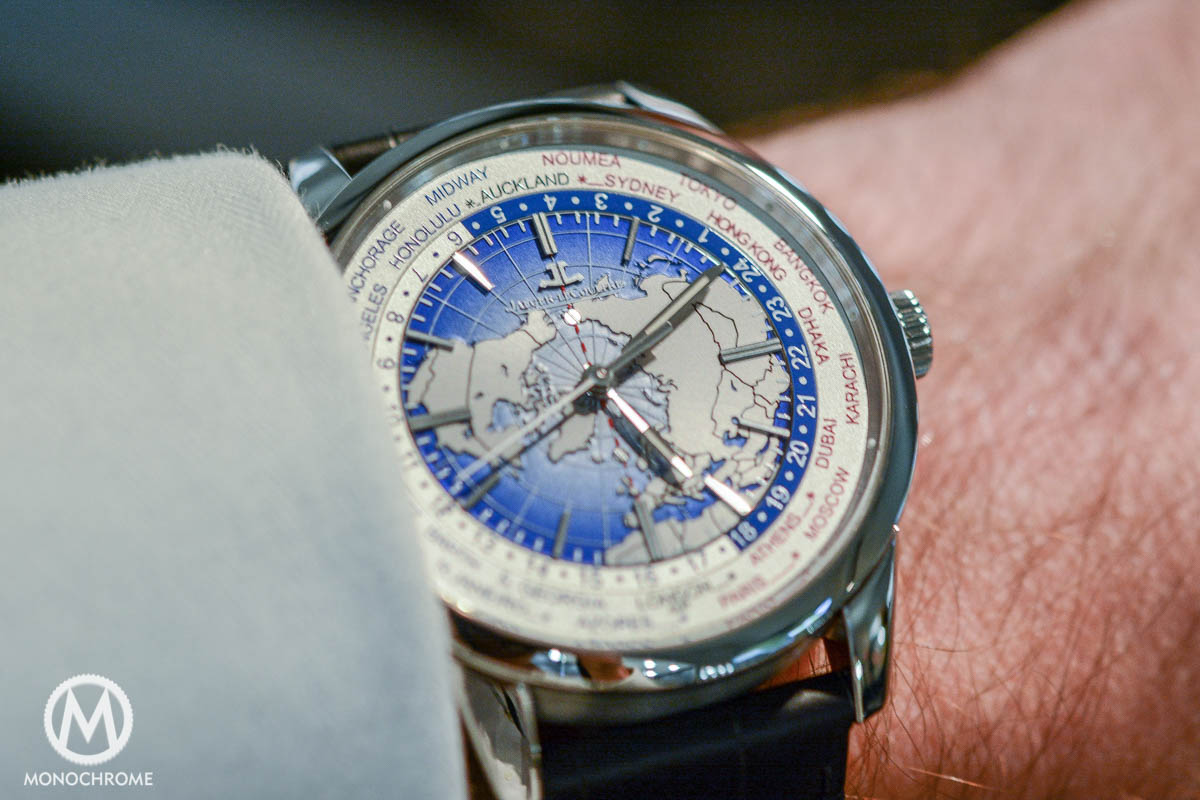