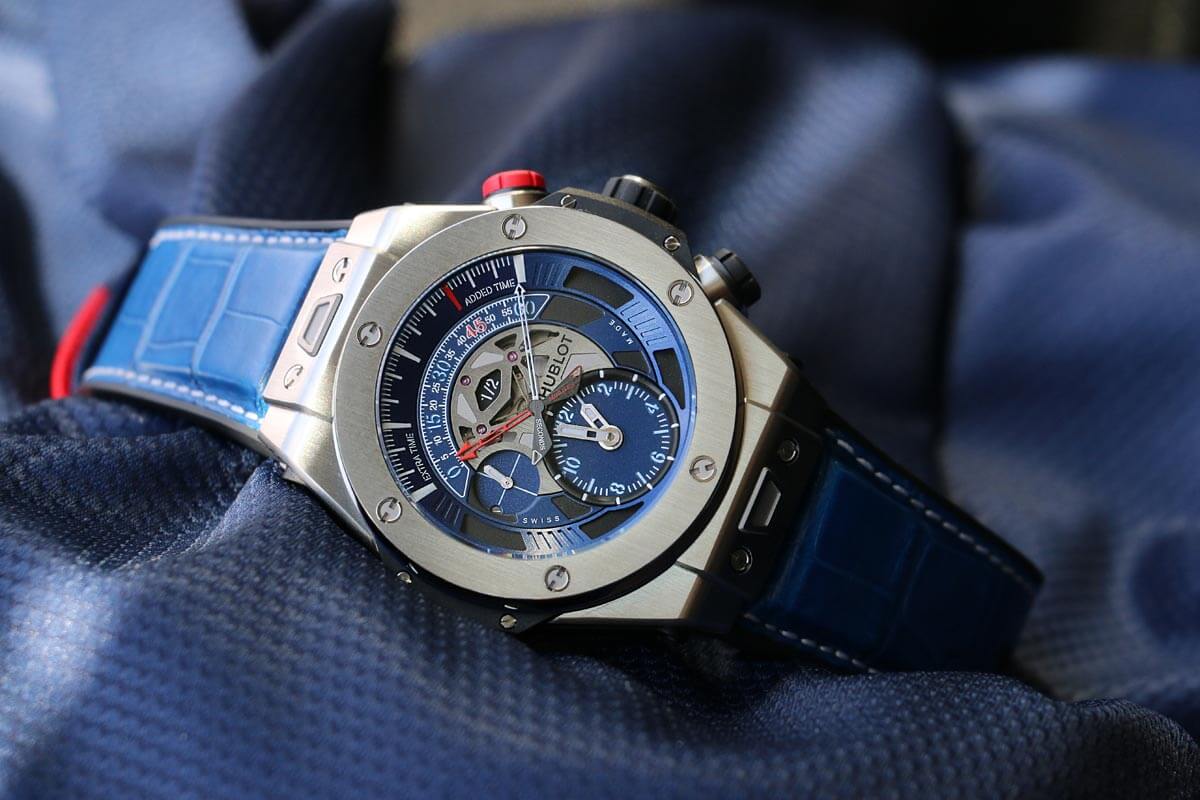 I’m actually amazed, and kind of speechless now I realise this… It took the watch industry a long time, decades, before there finally is a watch that can be called the ultimate football watch. In the 1960’s and 1970’s there were some chronographs with a 45-minute register, in stead of the usual 60-minute register. But that’s as far as it goes, in terms of football watches (for the non-football peeps… each half of the match lasts 45 minutes). Last year Hublot introduced the very first proper football watch, the Hublot Big Bang Unico Bi-Retrograde, and now they come with a limited edition for the Parisian football club Paris Saint-Germain.

While the 1960’s and 1970’s 45-minute chronographs were some sort of attempt to have a watch that was able to measure the 45 minute lasting half’s of a football match, there was never one that also enabled you to measure the extra time of a match, that is added by the referee. Several years ago Hublot already did a foray into the world of football, which resulted in (among others) the King Power ‘Red Devils’ in dedication of the brand’s sponsorship with Manchester United. That watch featured a central 45-minute counter, and grass of ManU’s stadium in every hour marker! When Hublot introduced the Big Bang Unico Bi-Retrograde last year, on the occasion of the 2014 FIFA World Cup in Brazil, there was finally the watch that could genuinely serve to time both halfs of a football match and the extra time. We don’t know what held the watch industry back for so many decades, but we’re glad that there finally is a watch that can be called the ultimate football watch. 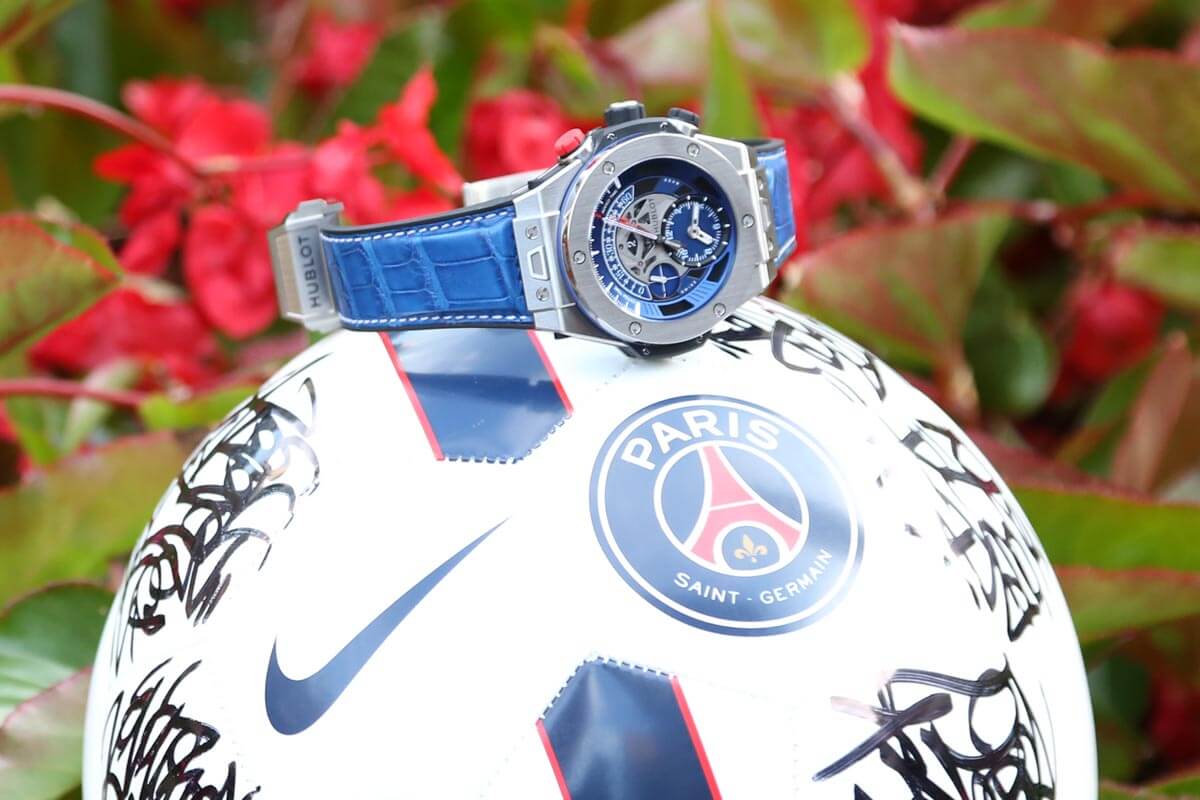 All that being said, here’s what the Big Bang Unico Bi-Retrograde can do and why this is the ultimate football watch. First of all, the chronograph function measures time up to 60 minutes. Not 45 minutes, but 60 minutes, because the referee can add time to each half, depending how much time players have been down on the lawn with a variety of injuries (physical or imaginary).

Now I hear you think, a 60-minute chronograph? What’s the big deal. The big deal is mainly about two things: clear and dedicated indications, and superb legibility of the measured time. That is because the chronograph’s second hand AND minute hand are placed on the central axis. Both indicate the measured time on a 120 degree arc, however the 45 is indicated in red and the ‘added time’ starts there (or not). The central second and minute chronograph hands, are both clearly indicated as such, so there can be no misunderstanding of the hand’s function. The second hand is white and instantaneously returns to zero when it reaches the “60” mark. The minute hand is red and also moves over the same 120 degree arc to indicate how much of the play time has elapsed. 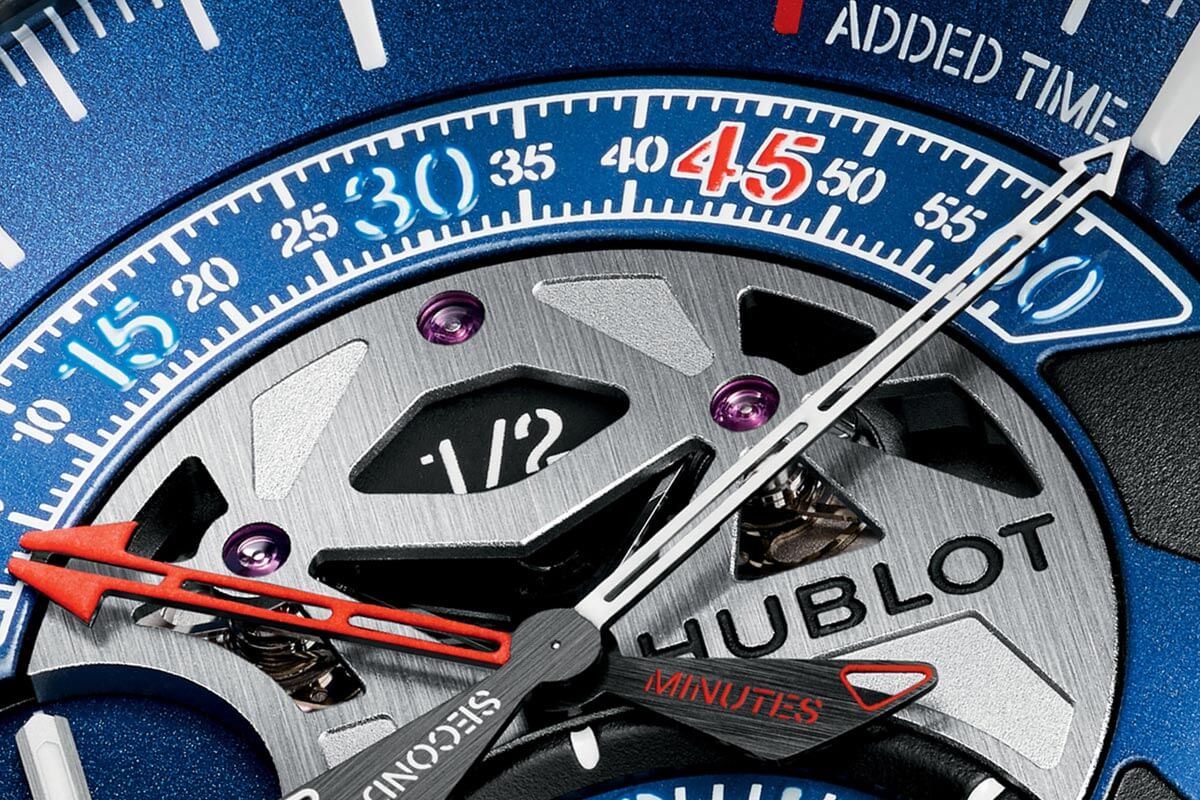 Inside ticks Hublot’s in-house Unico movement, calibre HUB1261, with a column-wheel actuation for the chronograph’s functions (start/stop/reset). The chronograph hands for indicating the elapsed seconds and minutes, and both so-called retrograde hands, meaning these hands to not make a full 360 degree rotation, however they instantaneously return to zero when they reach a specific point.

And there’s more! Through the aperture below the 12 o’clock position, you can see a black disk with “1/2″ in white font. This means that it’s half time, and the players are off the field for 15 minutes. With this watch you can also keep an eye on how long the half time takes, and how long before the players should return to the field. Like most chronographs there are two pushers to operate the chronograph: start, stop and reset. The pusher at the 2 o’clock position also serves to switch to the next period: 1st half, half time, 2nd half and end of match, visible through the aforementioned aperture.

The time, hours and minutes, is indicated on a small sub dial at the lower half of the dial.  Left of centre is the small second hand in its own sub dial. 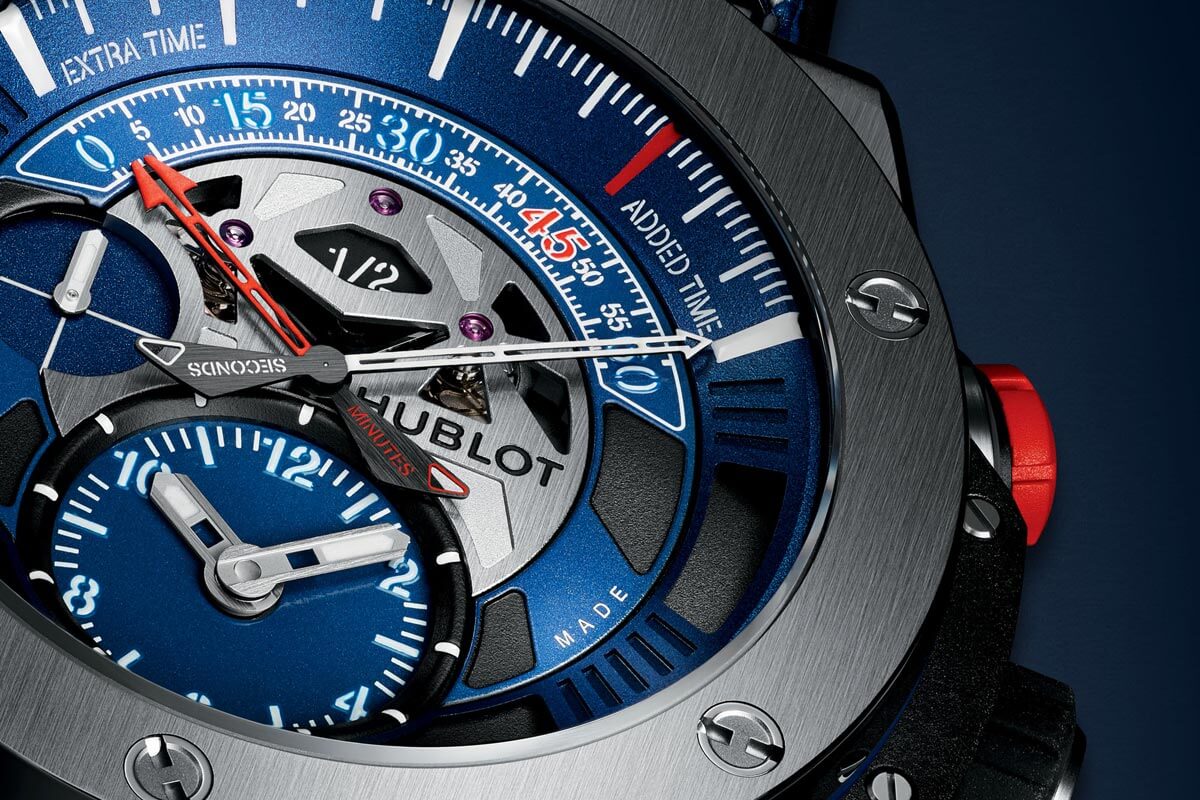 The first two models of the Hublot Big Bang Unico Bi-Retrograde Chrono, introduced for the 2014 FIFA World Cup in Brazil, were in Ceramic Carbon and in King Gold Carbon, and a year later Hublot presented two new iteration on this theme in Titanium Ceramic and in King Gold Ceramic. All four watches are still available in the regular collection. This special edition for the Parisian football club Paris Saint-Germain is a limited edition of 100 pieces, and comes in the colour of Paris Saint-Germain.

The Big Bang Unico Bi-Retrograde Paris Saint-Germain has a 45.5 mm titanium case, and in the case-back a sapphire crystal with the Paris Saint-Germain logo printed. The red, white and blue of the Parisian team are reflected throughout the dial, hands and strap. The watch will be available exclusively at Hublot boutiques around the world. Price: 22.900 Euros. 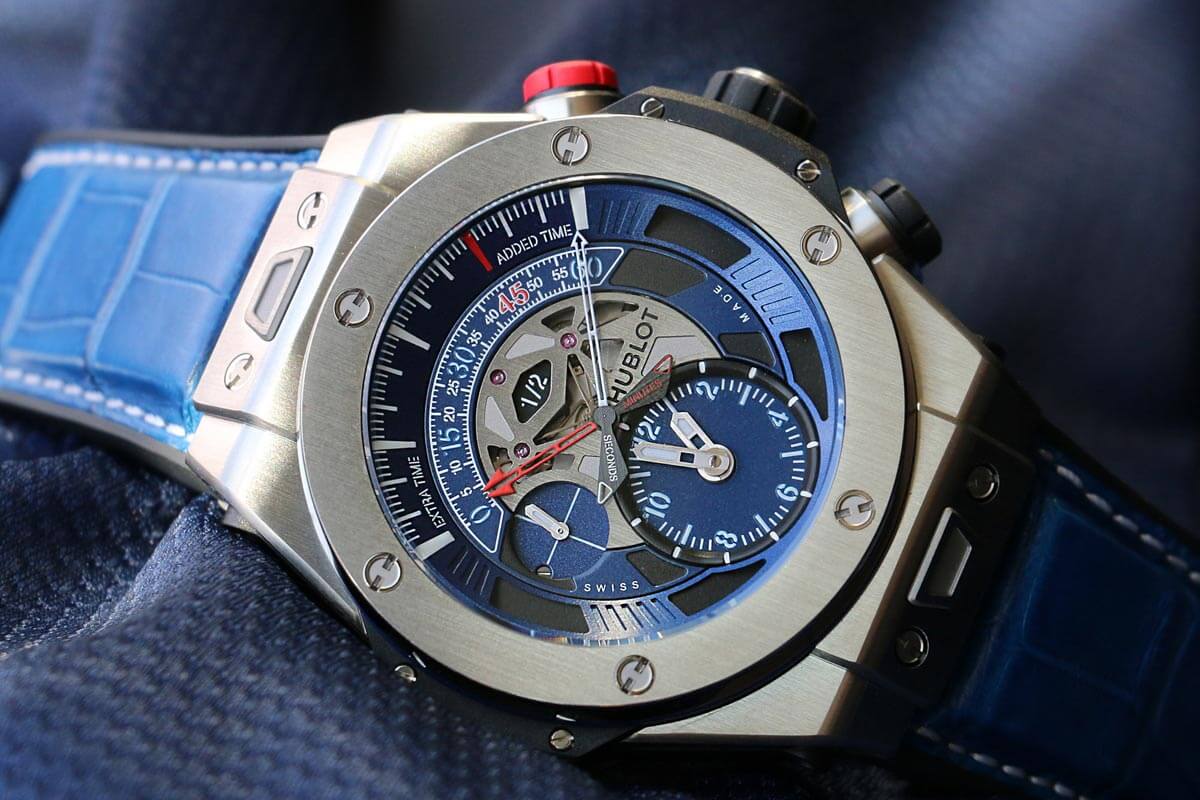 All the Generations of the Patek Philippe 5270 Perpetual Calendar Chronograph explained, including the 2015 third generation – Review, specs price