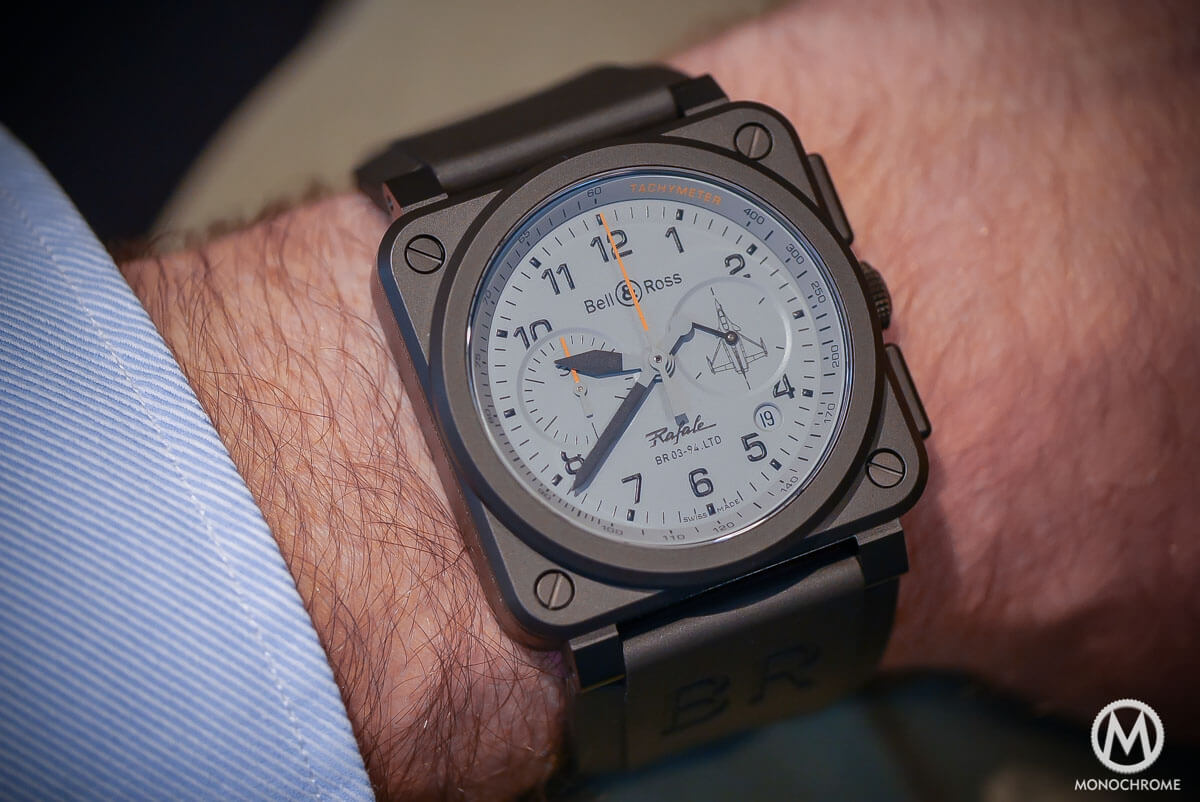 10 years ago Bell & Ross introduced a design that quickly became a proper icon. With the idea of recreating an aviation dashboard instrument to be worn on the wrist, the BR 01 (and its smaller sister, the BR 03) gained success and recognition, becoming nowadays one of the major manufactures. Amongst all the limited editions we’ve seen so far (and there are many of them available), the latest creation couldn’t have been more justified. Here is the Bell & Ross BR 03 Rafale Limited Edition – a BR 03-94 Ceramic Chronograph to celebrate the Dassault fighter aircraft.

As a French manufacture dedicated mainly to aviation and military timepieces, the tribute payed to the Dassault Rafale (a French fighter aircraft) seems like THE perfect alliance. The Rafale can be seen as the French pride, a high-tech fighter plane, which entered into operational service in 2004 in the Navy, and in 2006 in the Air Force – and certainly one of the best known and most advanced fighter aircrafts available (excuse the author for his excesses of enthusiasm, but Frenchies are like that…). More seriously, it’s not the first attempt of a collaboration between the two brands, as Bell & Ross introduced in 2013 a limited edition dedicated to the 50th anniversary of the Falcon business jet. With the Bell & Ross BR 03 Rafale, the collaboration is pushed a step further with a piece that is not only adorned with a logo or specific colours but developed like it could be worn by pilots of the Rafale, during missions and with the goal of being a proper on-board instrument. 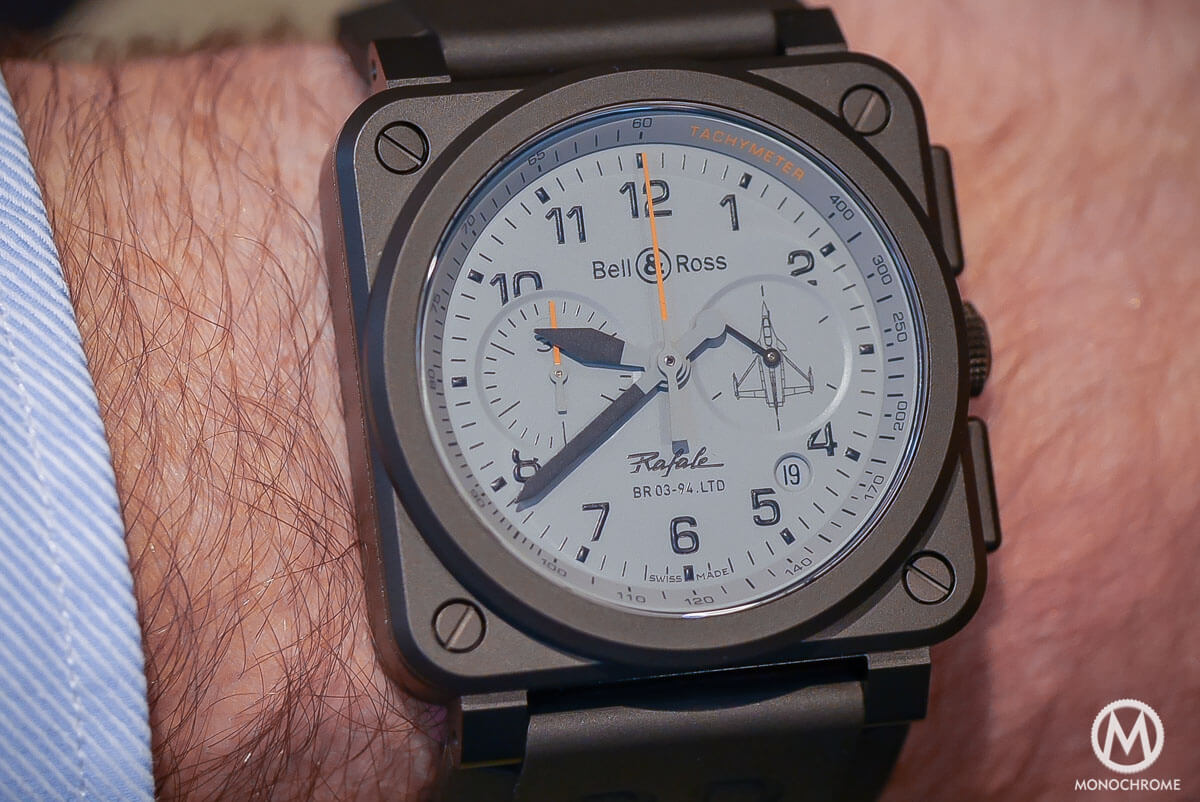 This Rafale limited edition is based on the BR 03 case, meaning the smaller version of the iconic square-shaped timepiece with a round bezel. Thus, even if the concept remains exactly the same as with the 10-year old BR 01, the wearability and the comfort are improved (for smaller wrists especially), without loosing the typical aura of the collection. The 42mm case is made of black ceramic and shows the typical B&R shape, with 8 (functional) screws – 4 on top and 4 on the caseback. This case is not as simple as it seems and its construction relies on this external ceramic square but also on an internal stainless steel container that carries the movement. Talking movement, the Bell & Ross BR 03 Rafale comes with the Calibre BR-CAL.301, a robust and reliable chronograph movement (with a modular conception). 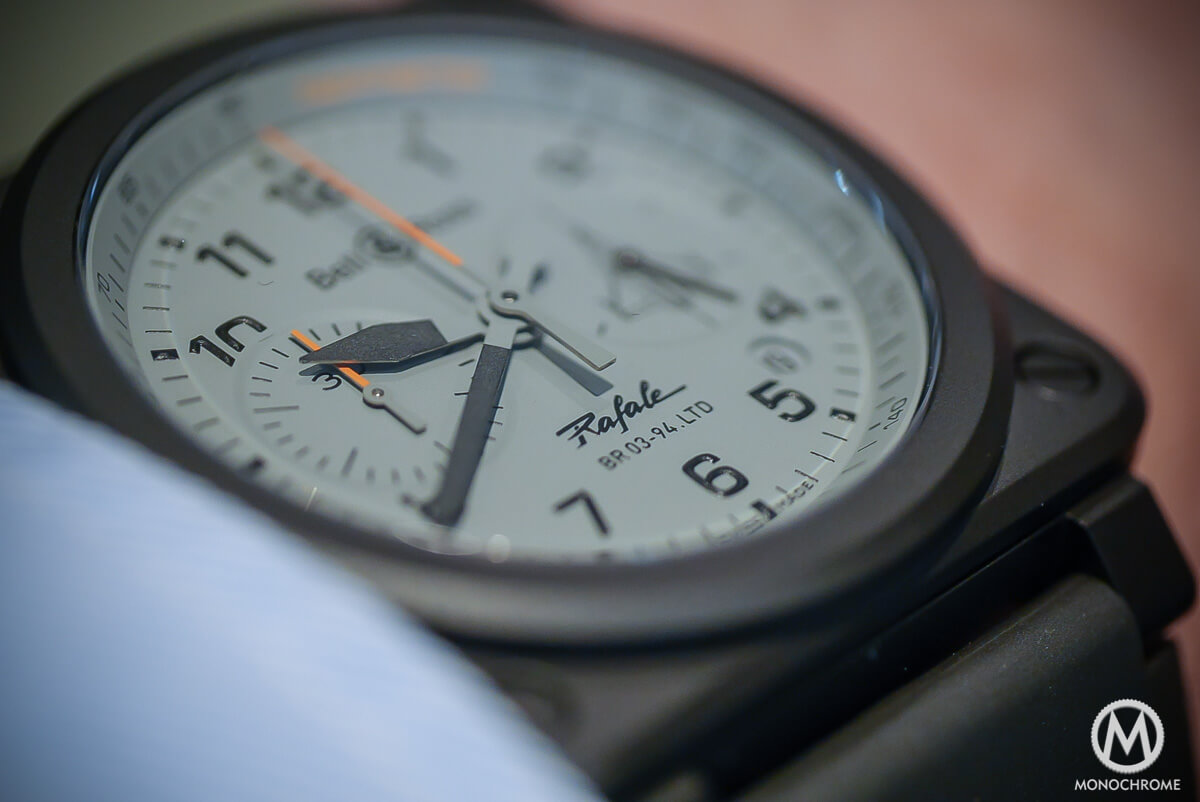 The dial of the Bell & Ross BR 03 Rafale really depicts the collaboration between the manufacture and the aircraft manufacturer Dassault – that has been involved in the design and conception of the watch. The goal was both to give the BR 03 the look of the Rafale but also to design it as an extremely legible and functional watch to be used as a proper instrument, part of the equipment of pilots. Thus, the dial shows the same matt grey colour as the jet-fighter, a non-reflective and very discreet (not to say stealthy) colour that allows to focus mainly on the inscriptions of the dial and thus on the timing indications. The Arabic numerals and the hands are highly contrasting with their black (but filled with luminous material) paint – the typography of the numerals subtly recalls that of the registration numbers that feature on the plane’s fuselage. 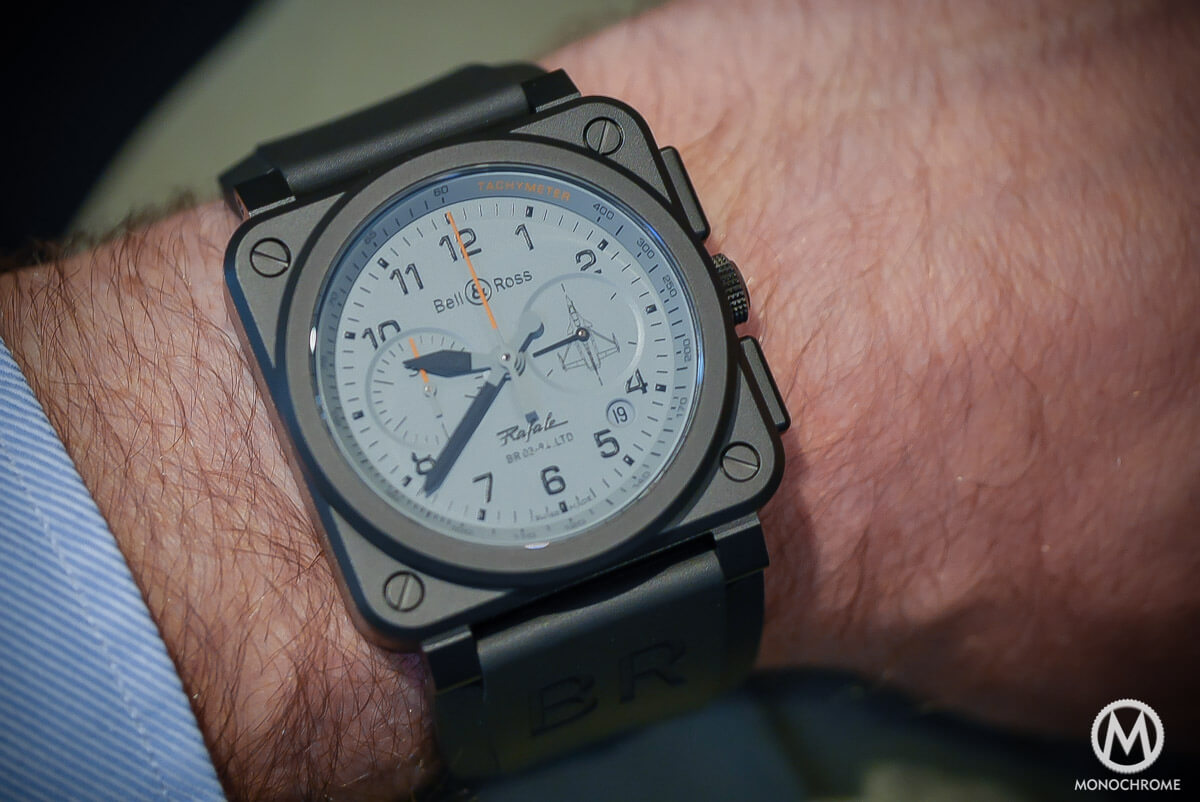 The hands used for the chronograph functions (the central second hand and the hand used in the 30-minute counter at 9) are distinguished by orange tips (in aviation, this is the colour of essential features and test flights), which offer excellent legibility in all conditions. The inner flange is showing a tachymeter scale (with the word “tachymeter” also written in a bright orange). Finally, the small second sub-counter is printed with a silhouette of the fighter aircraft. 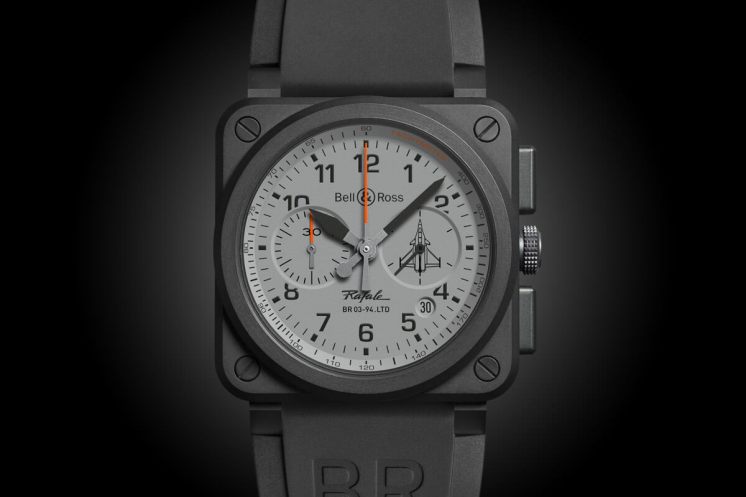 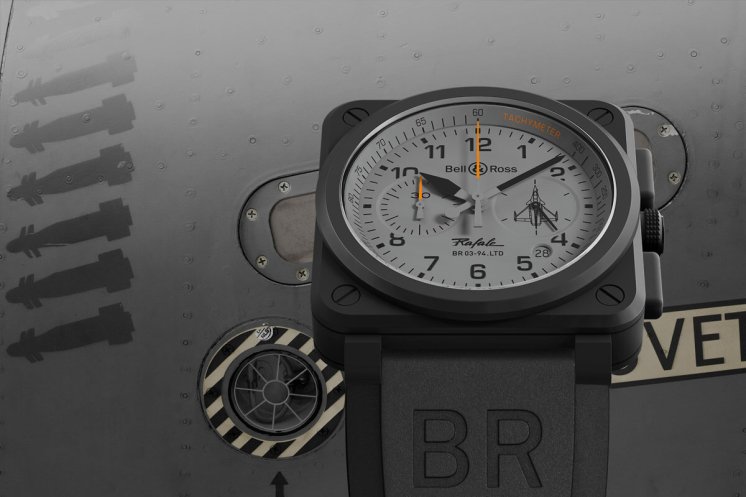 The Bell & Ross BR 03 Rafale Chronograph really shows the DNA of the brand, meaning this intimate link between watchmaking and military aviation. It will be a limited edition to 500 pieces priced at 5.200 Euros. More to read on BellRoss.com (where you can even by it online here).