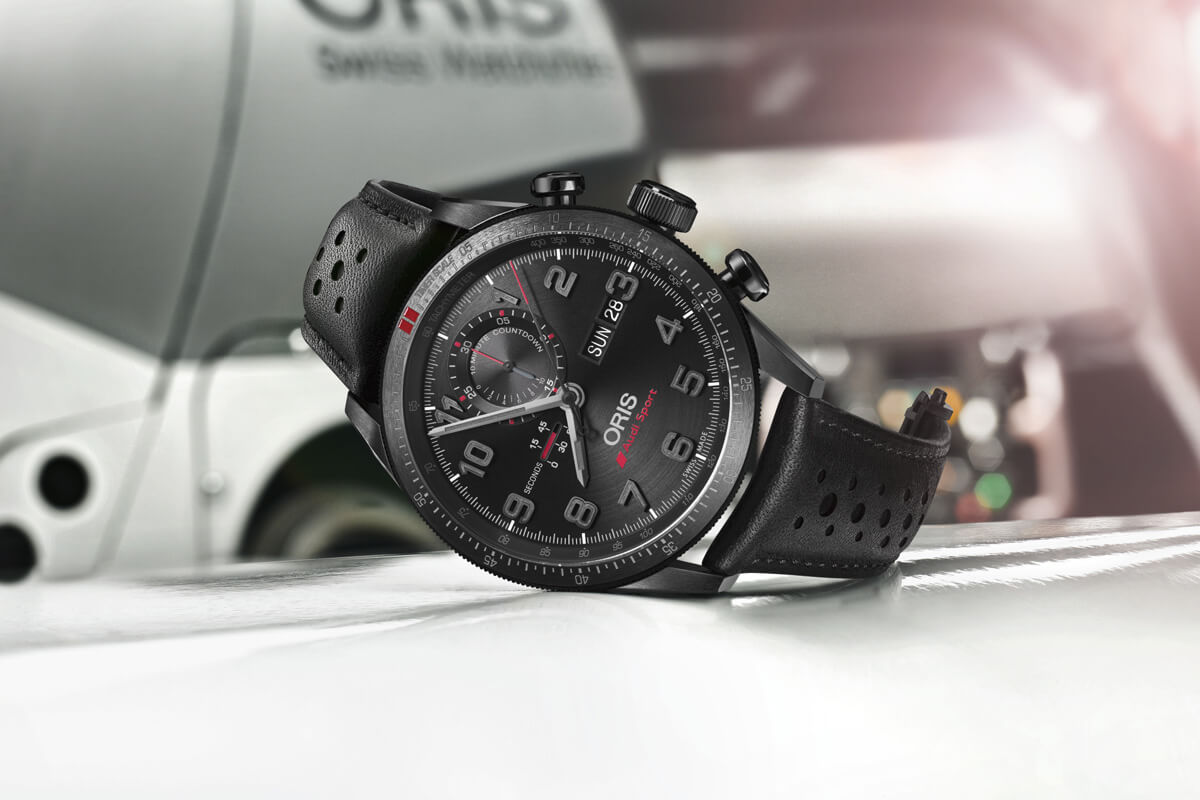 Just after TAG Heuer and its Carrera Nismo Calibre 16 Chronograph, it’s time for another manufacture, also known for its collection of watches inspired by racing cars, to announce a new timepiece, and the prolonged partnership with one of the teams engaged at the 24 Hours of Le Mans. The result is a sporty chronograph dedicated to the previously-rewarded Audi R18 e-tron Quattro (winner in 2014). Here is the Oris Audi Sport Limited Edition II Chronograph that celebrates the second year of the landmark partnership between Oris and Audi Sport.

The battle between racing teams and their sponsors will be on the track of Le Mans but also on the wrists this year, as, to be honest, the TAG Heuer Carrera Nismo Calibre 16 Chronograph and this new Oris Audi Sport Limited Edition II Chronograph share a lot of specifications, both for the design and the mechanics. The Oris shouldn’t be underestimated though, as it has several arguments to win the race, starting with a long track record of producing high-performance motorsport timepieces, with a heritage that can be traced back to the 1970 Chronoris. The new Audi Sport Limited Edition II Chronograph is the latest in the line. Just like a racing car, it’s build to be as light and as strong as possible, and is packed with a series of mechanically simple but pleasant features. 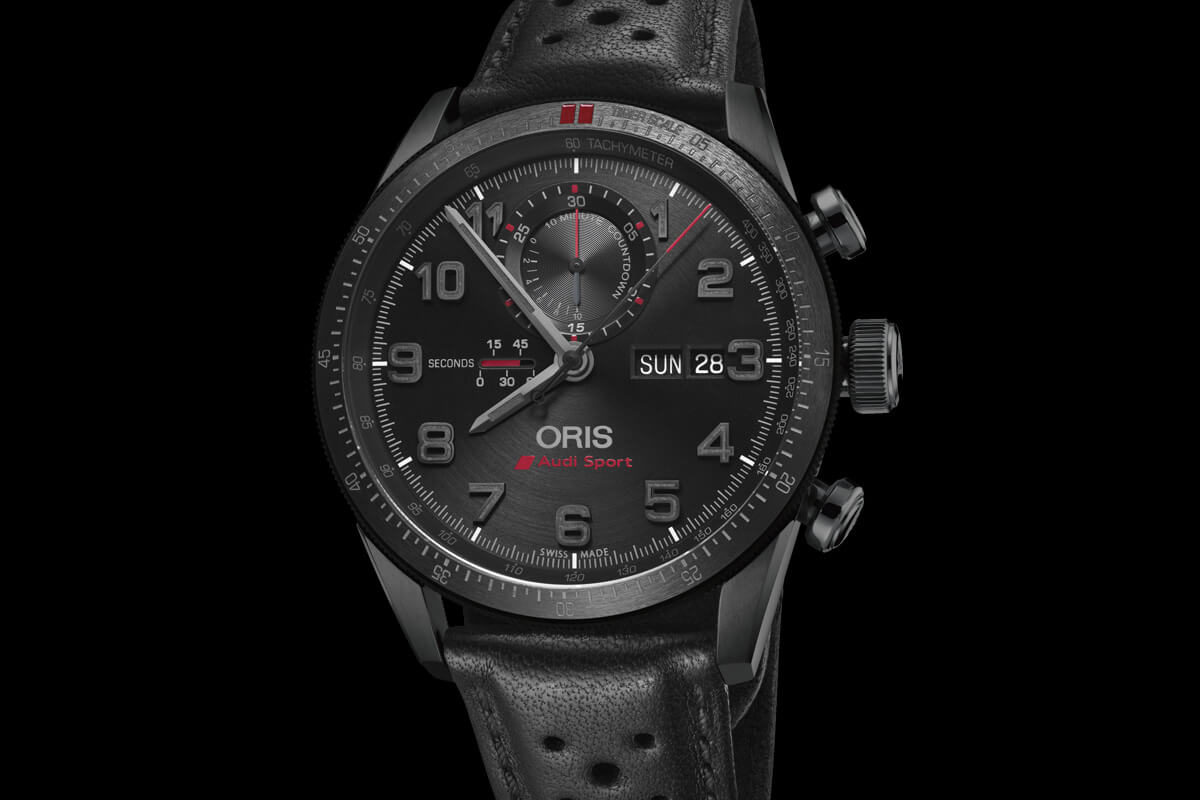 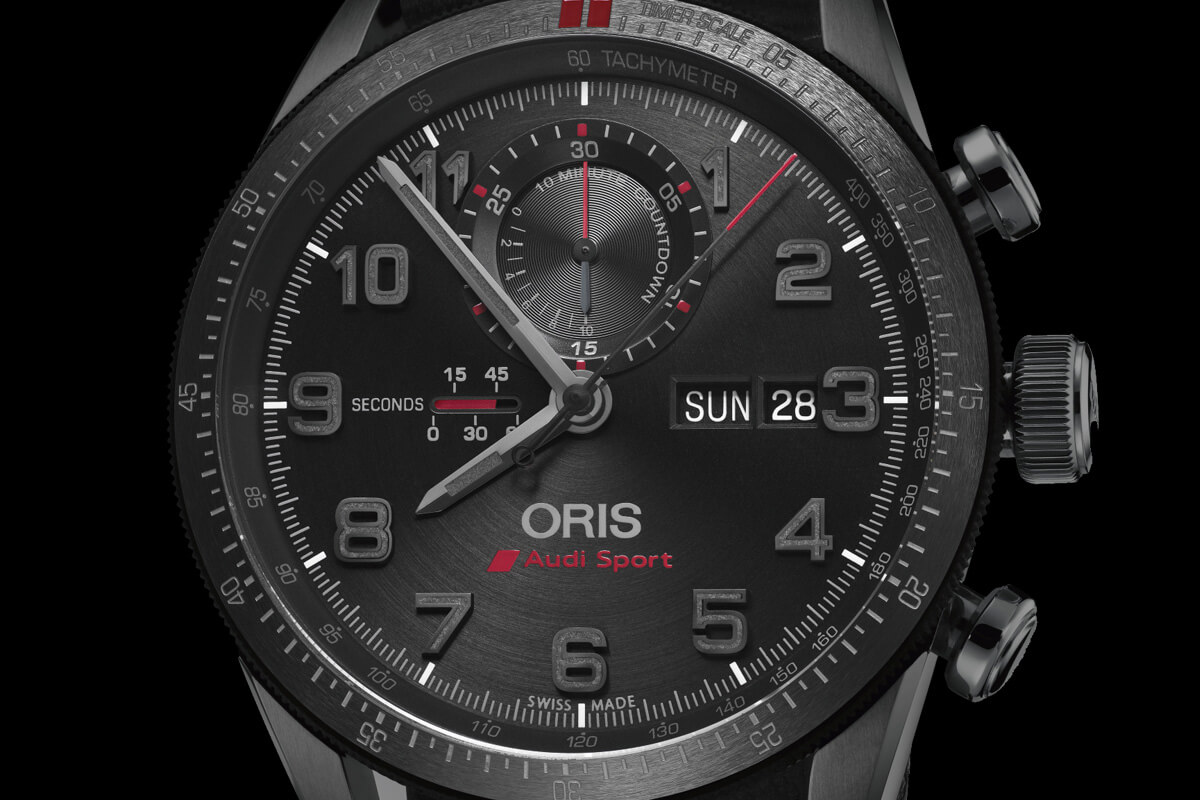 The dial is build around a circular-brushed plate, with black and grained applied numerals, filled with black luminous material. At 12 sits a large minute counter, with a simple but clever countdown scale. The counterweight of the minute hand is used on a separated scale, graduated from 10 to 0 and that will help race drivers to anticipate that start of the race. This feature might just be a new printing and nothing mechanical, it’s cleverly thought. Same goes for the small second indicator at 9, as it is displayed in a linear window and works as a retrograde gauge – Simple but quite cool. 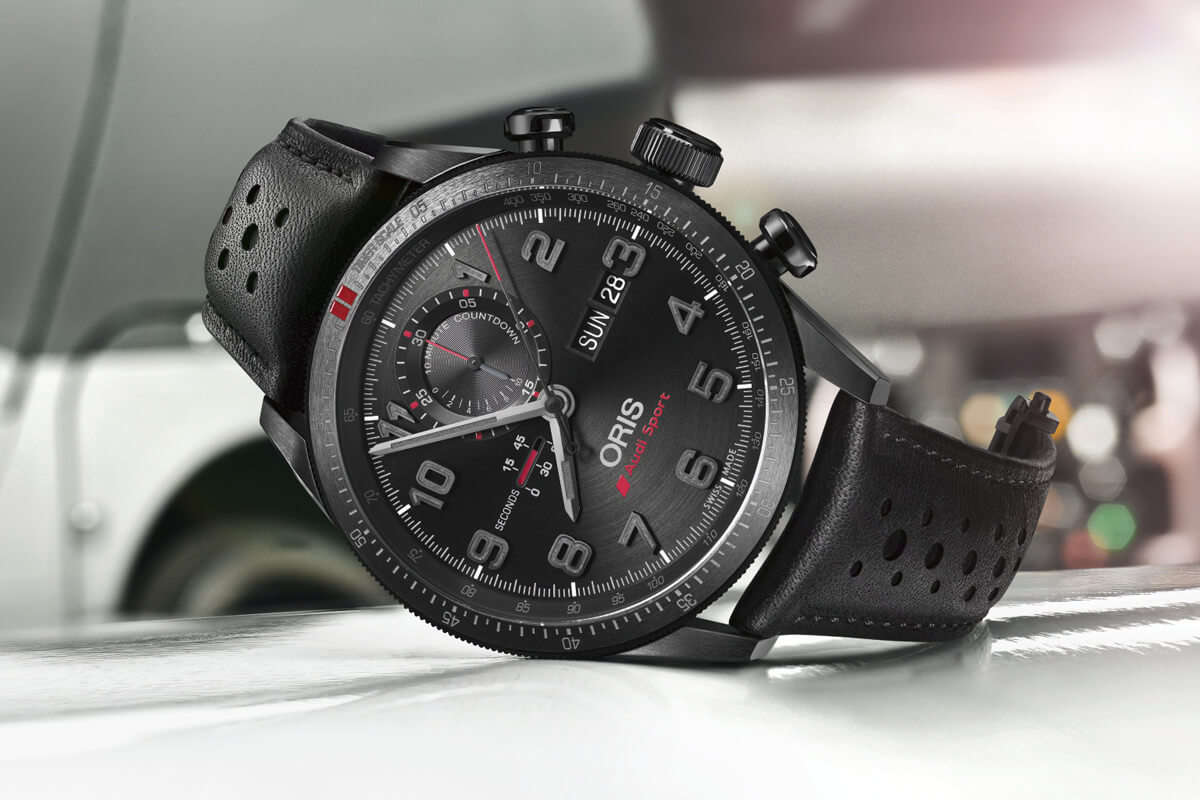 The Oris Audi Sport Limited Edition II Chronograph features two distinct scales. The first is a tachymeter, located on the inner flange of the dial. The second one is a 60-miunte timer engraved on the brushed ceramic insert of the bi-directional rotating bezel. Thus, the driver and owner will be able to calculate interval of times and average speeds.

Inside the Oris Audi Sport Limited Edition II Chronograph ticks the calibre Oris 778, based on a Sellita SW 500 (a clone of the Valjoux 7750), meaning a robust automatic chronograph movement that boasts 42 hours of power reserve – this is again a shared specification with the TAG Heuer Nismo. For the moment, the race between Oris and TAG is tight, very tight. 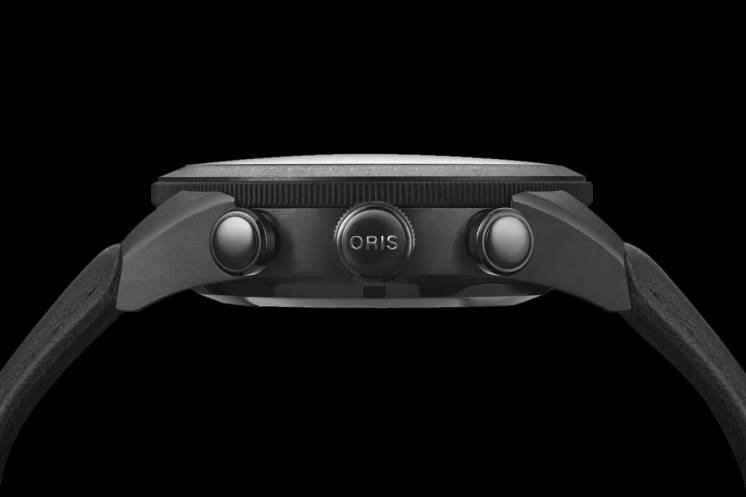 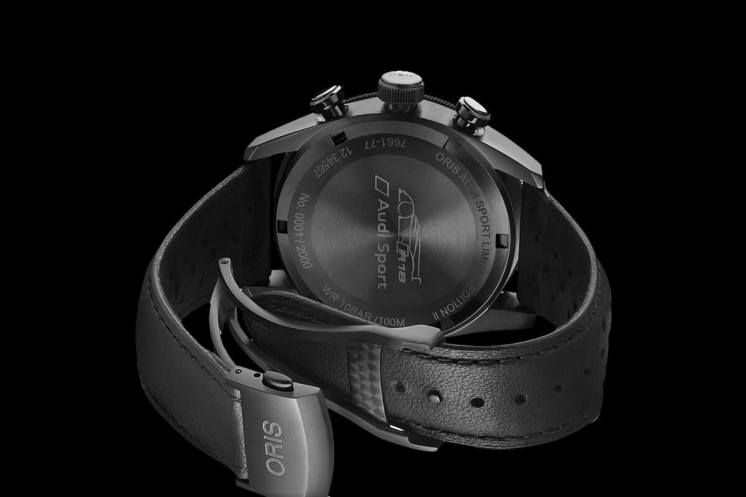 As the specifications and the design are close, the main point to decide who’s going to be the winner will be the price, as Oris proposes this Audi Sport Limited Edition II for 3.600 Euros (vs. 4.750 Euros for TAG). There might be a winner here. Sorry Nismo, but it seems that Audi is again in the position to win the race this year – or will it be the Porsches and thus, the Chopard Superfast?

The Oris Audi Sport Limited Edition II will be worn by Audi Sport drivers during the 2015 season, and is limited to 2,000 pieces. It will be available in June 2015.