The so-called “beautiful game” is what we Americans call soccer and what nearly everyone else calls football. Some of the world’s luxury watch and sports watch makers have gotten in on the excitement, with special-edition watches specially devoted to the sport and its players.

Hublot — headed by rabid fútbol fan Jean-Claude Biver — became official timekeeper for the FIFA World Cup in 2014. Accordingly, the brand used the opportunity to release a plethora of special-edition Hublot World Cup watches. The most technically interesting of these watches is the Hublot Big Bang Unico Bi-Retrograde Chrono, nicknamed the Hublot “Soccer Bang.” Designed to showcase the colors of host country Brazil’s flag, the watch is powered by a new in-house movement, Caliber HUB1260, which features a bi-retrograde chronograph function with the hands recording 15-minute intervals, making it ideal for timing the halves of a soccer match, plus 15 minutes “extra time.” The Hublot Big Bang Bi-Retrograde Unico is available in two cases, both with carbon fiber bezels, one in black ceramic ($26,600), the other in Hublot’s proprietary “King Gold” ($42,200). Click here for more information on the watch. 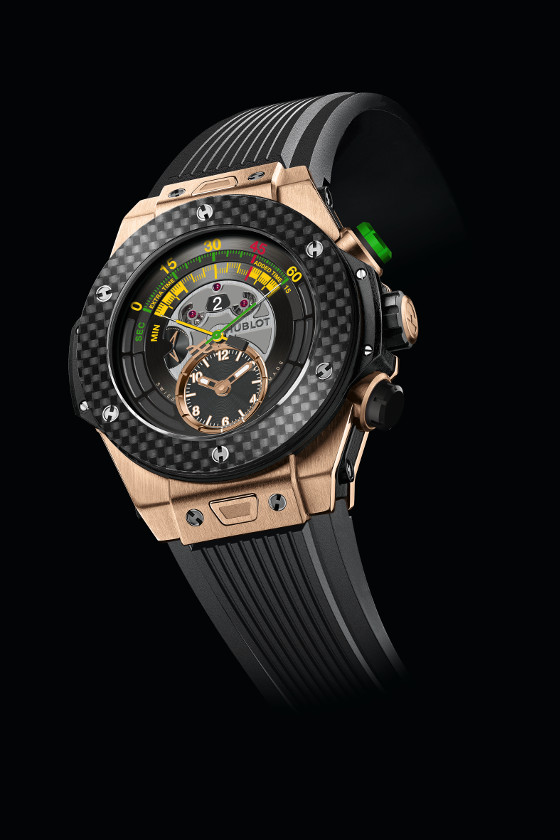 Parmigiani introduced its Pershing Chronograph 005 CBF at SIHH 2014. These chronograph watches have 45-mm-diameter titanium cases (one version with a rose-gold bezel) and are designed with the colors of the Brazilian national team (Confederaçåo Brasileira de Futebol, or CBF), which also happens to be the colors of the national flag. Blue is used for the côtes-de-Genève-finished dial, and green for the five “victory stars,” symbolizing the Brazilian team’s five World Cup championships and worn on the players’ jerseys, which are arranged in a circle at 3 o’clock. The watch comes on a blue Hermès alligator leather strap or a yellow rubber strap with the embossed logo of the CBF. The U.S retail price for each is $25,000. Click here for more info and other Parmiginai soccer watches. 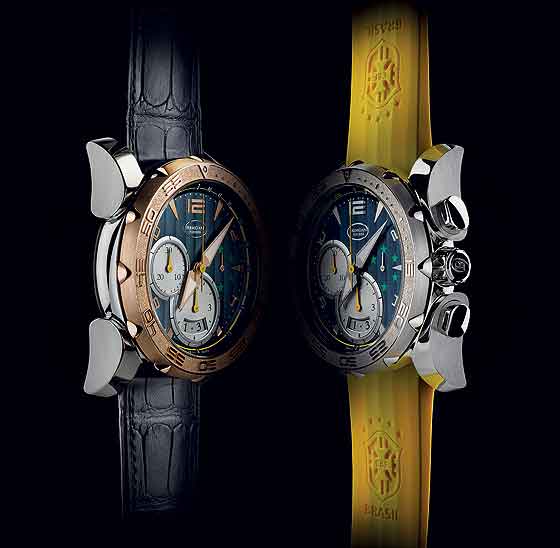 Audemars Piguet has created a watch in honor of one of the world’s most accomplished footballers, FC Barcelona’s Lionel “Leo” Messi. There are several versions of the Audemars Piguet Royal Oak Leo Messi, which has an automatic chronograph movement with date display and small seconds, including a model with steel case and anthracite dial ($30,800, limited to 500); with rose gold case and anthracite dial ($52,000, limited to 400), and with platinum case and brushed blue dial and blue strap ($84,300, limited to 100, pictured). All have bezels made of tantalum. 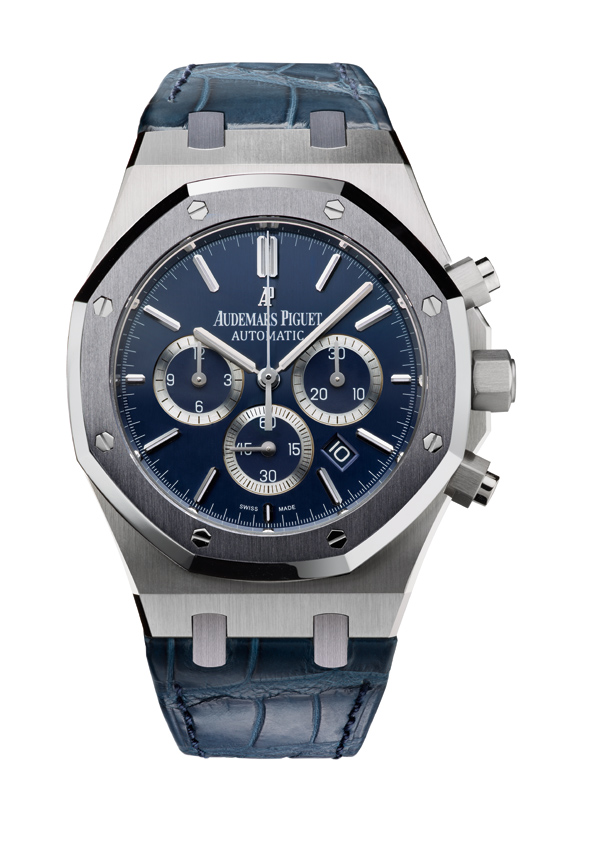 Lucerne-based Carl F. Bucherer shows its loyalty to the Swiss national team with the release of the Carl F. Bucherer Patravi ScubaTec SFV Special Edition, announced last May. The black-and-red color scheme echoes the colors of the Swiss team, and the logo of the Swiss Football Association (SFV) appears at the 6 o’clock position on the rotating divers’ bezel. The engraved figures of footballers make up a subtle pattern on the black dial, and the rubber strap also carries the black-and-red color motif. Carl F. Bucherer presented a personalized watch to each member of this year’s Swiss national team. You can’t get one of those, but you can purchase one of your own (with an engraved soccer ball on the caseback) for $6,400. For more info and specs on the Carl F. Bucherer Patravi ScubaTec, the brand’s first dive watch collection, click here. 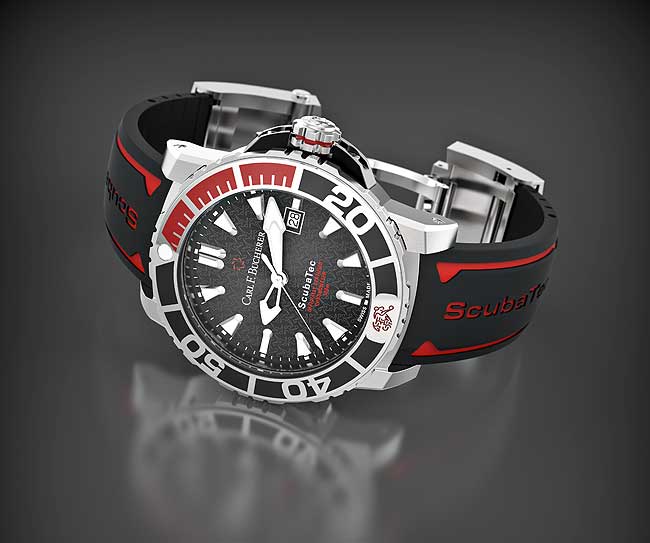 Tissot’s history with soccer actually begins in 1976, when the Swiss brand produced its Tissot Football Chronograph, a watch designed for referees that included a colorful dial that indicated halftime. The Tissot Quickster Football is a modern-day take on that watch, with a soccer timekeeping function, this one powered by a Swiss quartz chronograph movement. The watch has an aluminum bezel, available in various colors based on the jerseys of teams. The stainless steel case is available with a black PVD coating (as pictured) and bears an engraving of a soccer ball on its back. The Tissot Quickster Football comes on a silicone strap; prices range from $450 to $525, 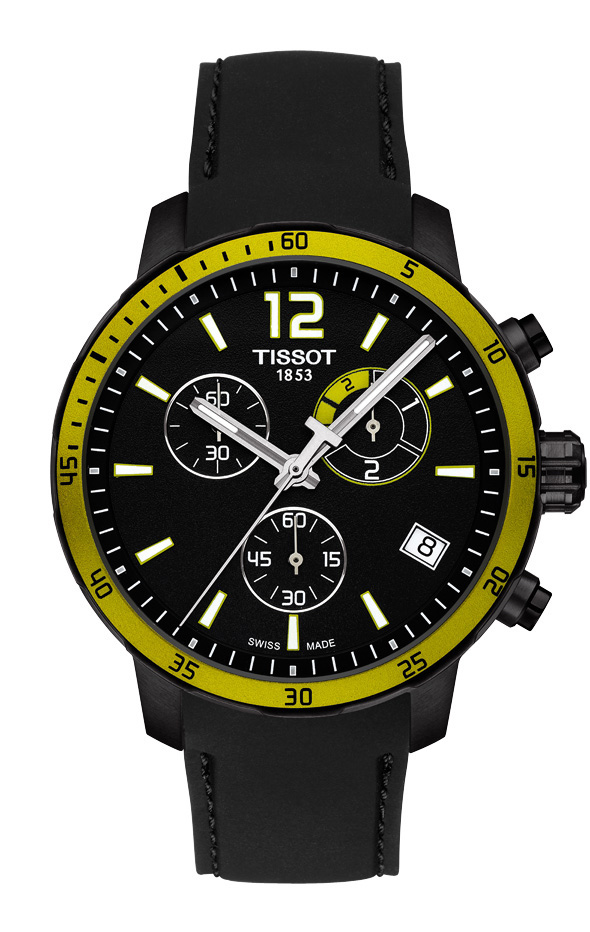 Jeanrichard announced its global partnership with London’s Premiere League Football Club Arsenal last March. The brand also launched a limited edition of its Aeroscope Chronograph sports watch in support of the team. The Jeanrichard Aeroscope Arsenal FC Limited Edition has a 44-mm case of micro-beaded, sandblasted black titanium and a bright red dial with a stamped honeycomb pattern. The watch, powered by Jeanrichard’s automatic JR66 movement, is a chronograph and also features a small seconds hand in the shape of the Arsenal club’s iconic “cannon” logo. The titanium bezel has an engraved, red-paint-filled tachymeter scale and the chronograph pushers are made of a carbon fiber composite. The Jeanrichard Aeroscope Arsenal FC is limited to just 250 pieces worldwide and is priced at $6,200.

This article was originally published on April 28, 2015. 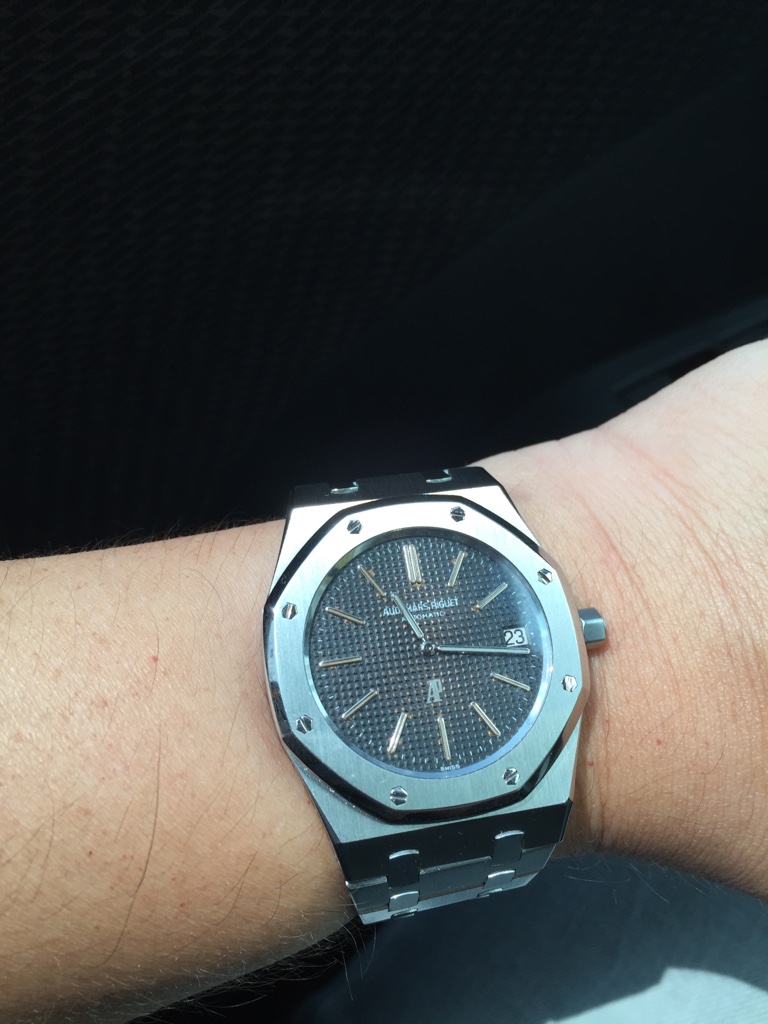