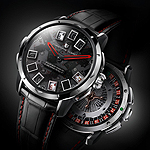 WatchTime returns to Las Vegas this week for the JCK 2014 and Couture 2014 watch and jewelry shows, starting on Thursday, May 29. As a preview to our live coverage of new watches at the show, we’re re-presenting last year’s list of luxury watches that evoke the spirit of Las Vegas. Check out these six watches inspired by Sin City and its games of chance, including some watches that double as functioning games themselves.

Christophe Claret’s 21 Blackjack functions as a miniature casino with three interactive games of chance: blackjack (with a striking mechanism), roulette, and a dice game. A pair of miniature dice are located in a cage at the 4 o’clock position on the side of the case, visible through a sapphire crystal. The winding rotor, visible through the caseback, doubles as a roulette wheel, which is set in motion by a few movements of the watch. However, the main attraction is the blackjack function. The dial features several windows with shutters which open to reveal the player’s and dealer’s cards. Under the dial are 7 rotating discs on which the “cards” are printed. The game is controlled with buttons on the side of the case. Audemars Piguet draws inspiration from the Vegas Strip for its Audemars Piguet Royal Oak Las Vegas Strip Chronograph. Its red-on-black design features red numerals and indices against a black “Mega Tapisserie” patterned dial and a blackened steel case on a black crocodile strap with red stitching. The watch, engraved with “Las Vegas Strip” on the caseback, is part of a limited edition of 400, each of which comes with two sets of Audemars Piguet playing cards. “Time with the Masters” Golf Day Held In Shanghai