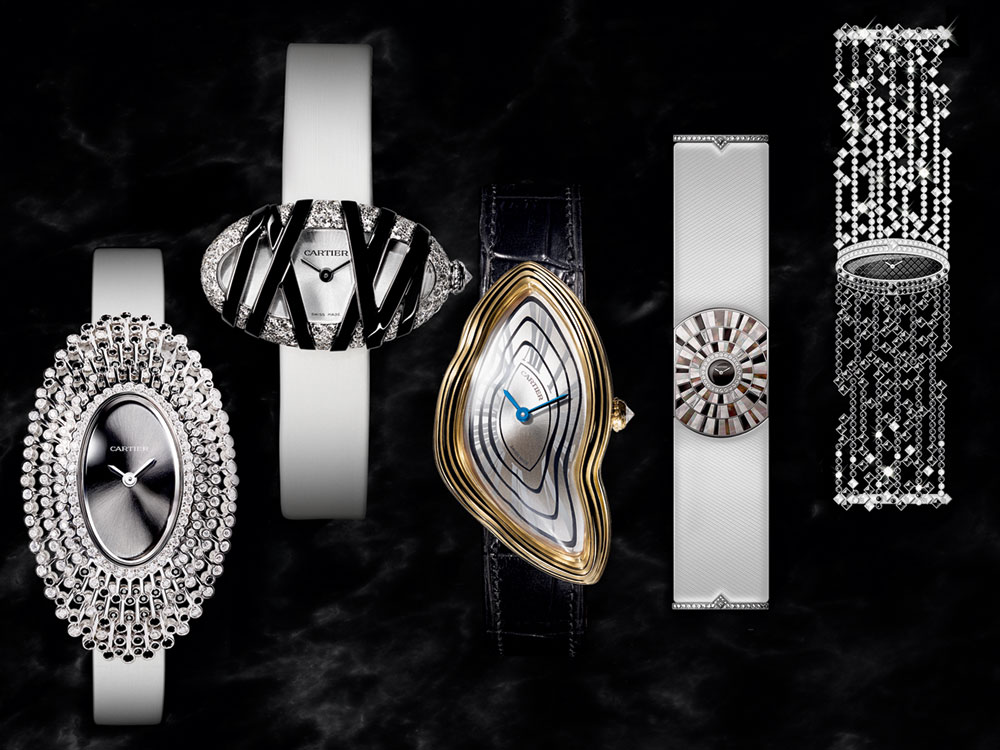 The shaped watch (anything that isn’t round) is a Cartier innovation that is as much a part of its creative heritage as the panther motif, or for that matter, the wristwatch itself – the first wristwatch on record, the Cartier Santos, was square. In 2015, the brand began to revisit its shaped watches, starting with a platinum skeletonized version of the Crash watch, followed a year later with a pink gold version. Last year, it resurrected the square-shaped Panther – which had been discontinued in the early 2000s – introducing a full collection with a new movement and a slightly revamped bracelet. In January at SIHH, Cartier revisits the Crash again with a new model, and introduces four new pieces in the Baignoire series of mostly oval cases. The new models are all part of the Libre collection. All but the new Crash contain quartz movements. 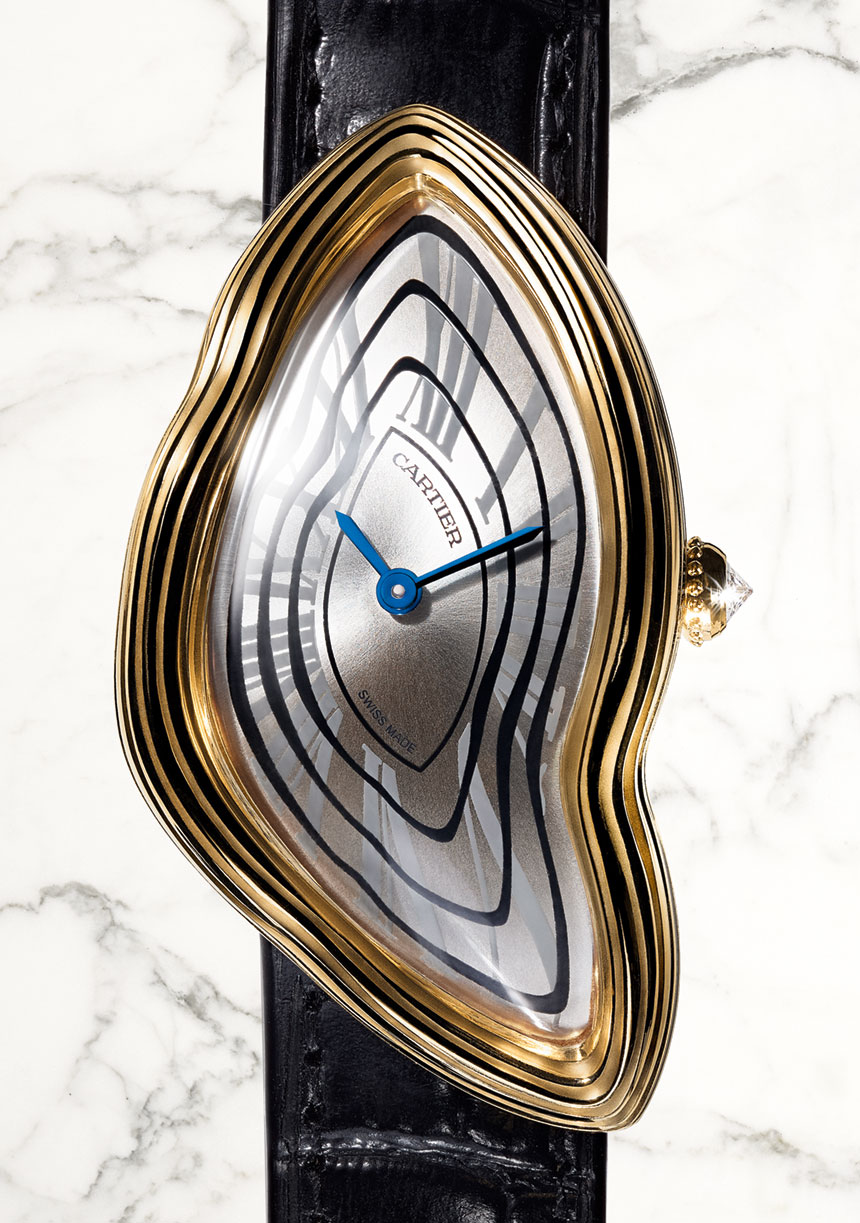 The Crash watch was introduced in 1967, inspired by the remnants of a client’s Baignoire Allongé watch that had been mangled in a fiery car crash. The watch was an interpretation of the surrealist art popular at the time. It was revisited in the early 1990s and again in 2013 as a ladies’ collection. In 2015, it was given haute horlogerie status as the Crash Skeleton, with an openworked manufacture movement designed to fit the distorted case shape. The new Crash Radieuse takes the Crash to the next level, with a seemingly crumpled case and dial, with barely-visible stretched Roman numerals. The case is yellow gold and it contains the manually-wound caliber 8970 MC. It is a numbered limited edition of 50 pieces. 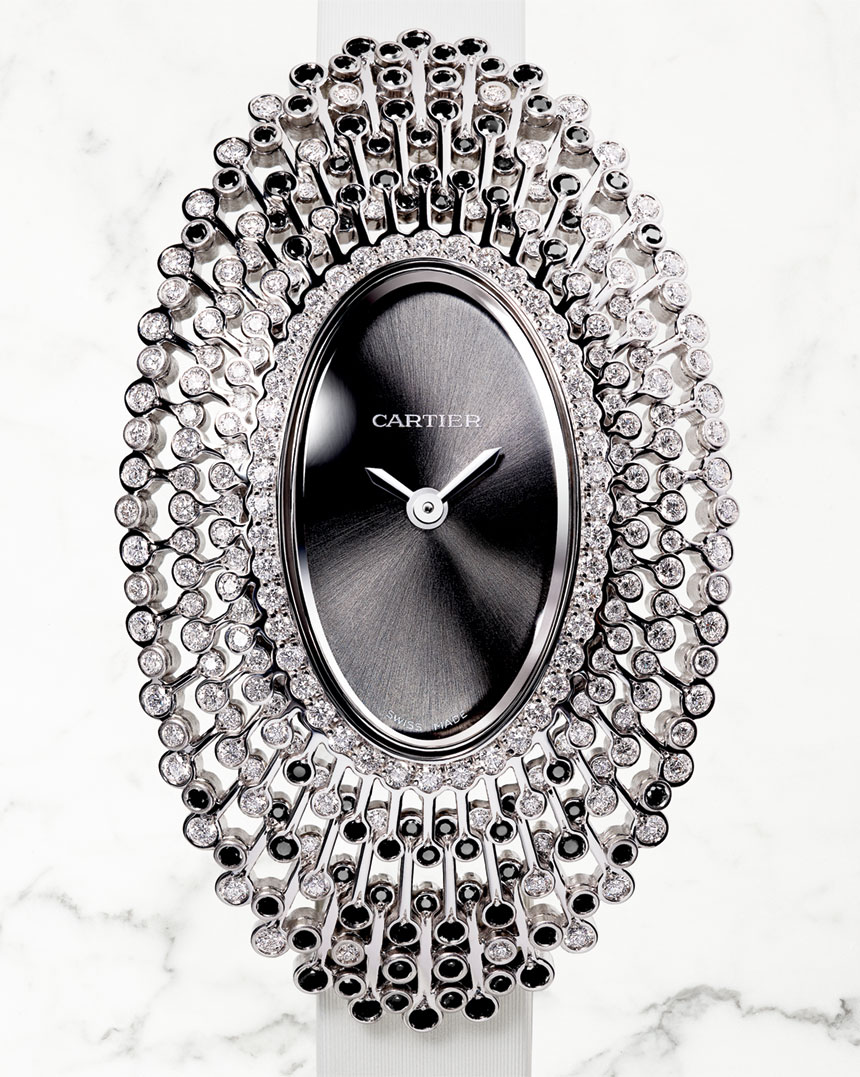 The Baignoire Débordante is designed as a starburst, with openworked white gold spikes emanating from the center of the oval dial. The stems are set front and back with diamonds and black spinels, with the spinels focused at the top and bottom ends. The watch, a limited edition of 50 pieces, contains a quartz movement. 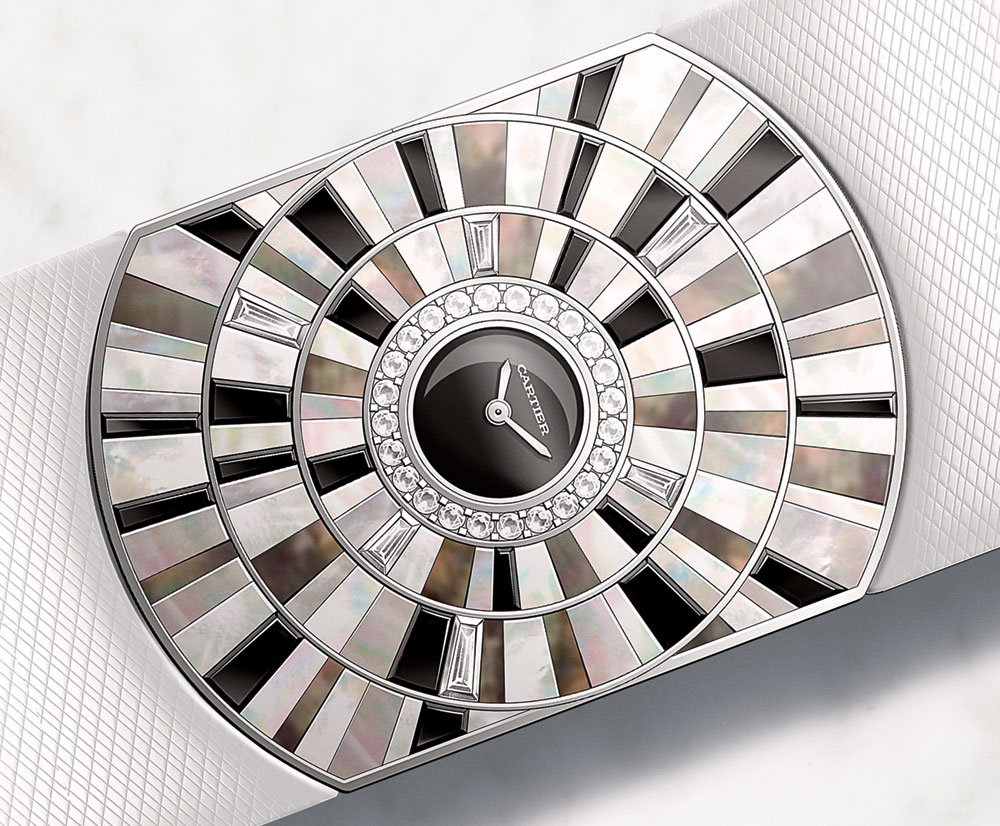 The Baignoire Infinie is a four-layer composition of concentric rings radiating out from the center dial. The rings are set randomly with baguette diamonds, white mother-of-pearl, black Tahitian mother-of-pearl, and black spinel. The circle appears to be cut off at the sides. The movement is quartz and it is limited to 20 pieces. 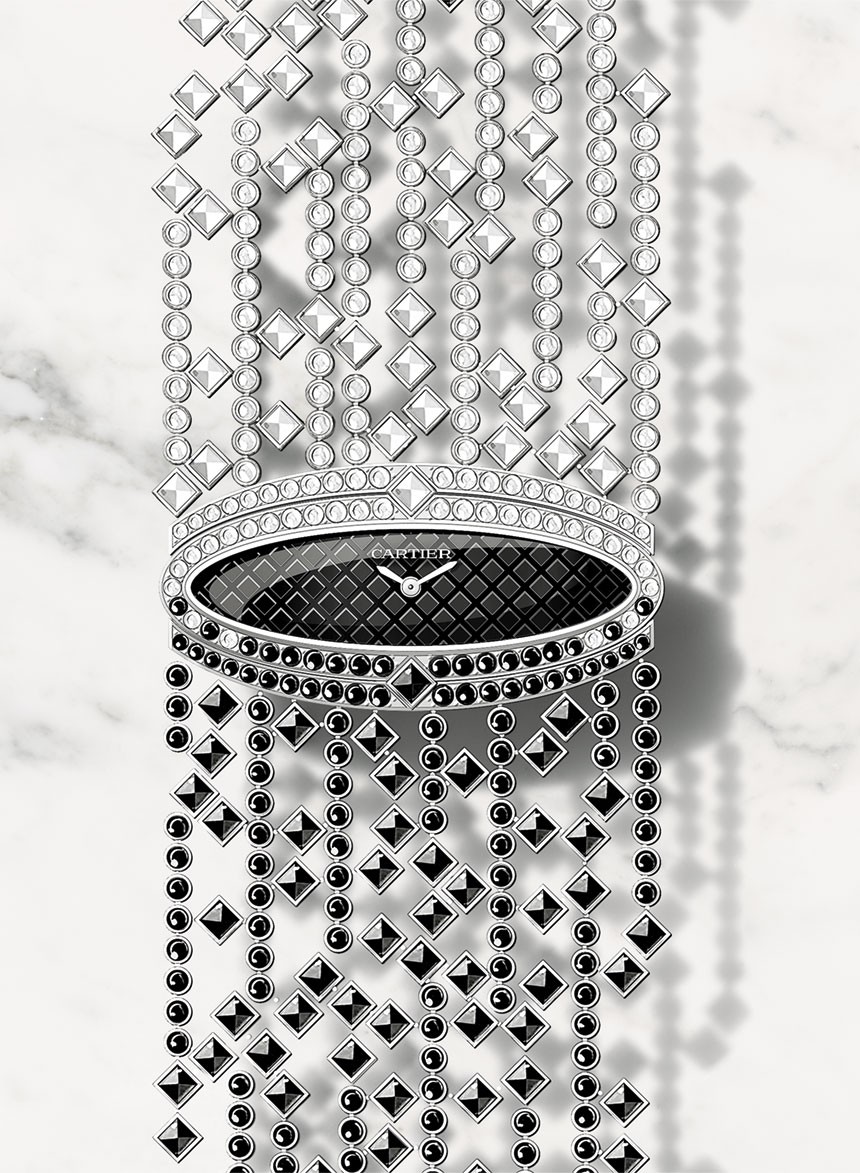 The Baignoire Étoilée is a jeweled watch with a delicate bracelet composed of small round and square-cut gems randomly set in an openworked link structure. The upended square shape of the gems is repeated as a pattern on the dial of the east-west oval case, which is set with a double of row of white diamonds on top and a double row of black spinels below. The 18k white gold bracelet is set with diamonds and black spinels. The movement is quartz and it is limited to 15 pieces. 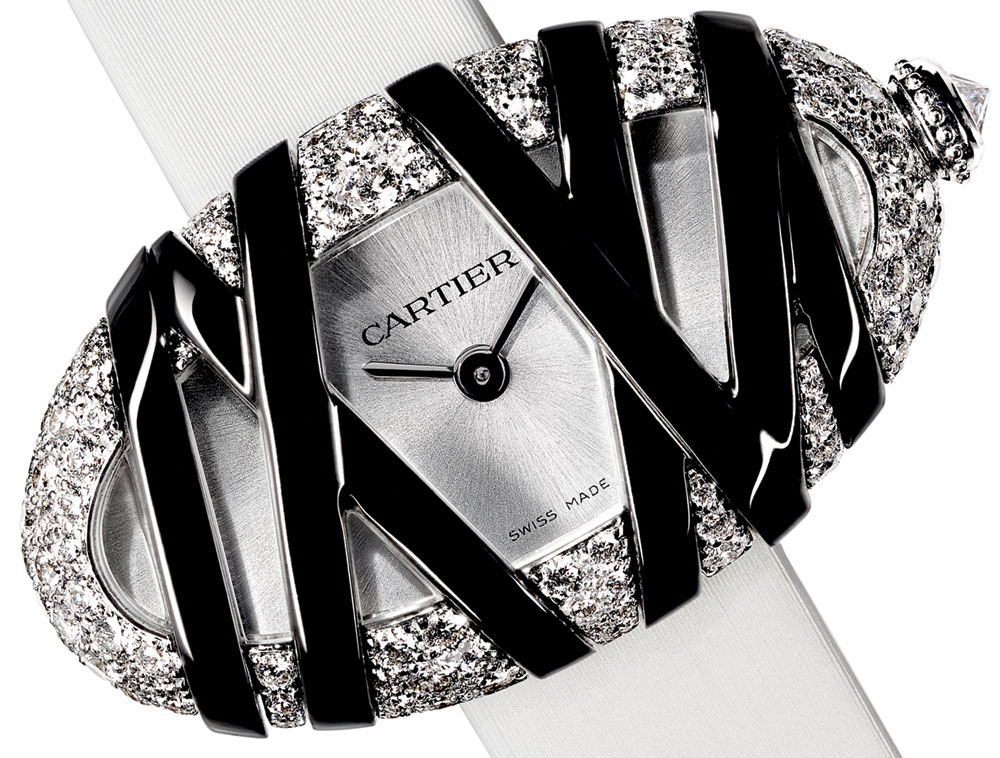 The Baignoire Interdite is all about Cartier’s signature Roman numerals, which crisscross the east-west oval dial. They are coated in black ADLC for dramatic contrast with the white dial. The bezel is set with white diamonds. The movement is quartz and it is limited to 50 pieces.

“He is notorious for considering the box,” stated one 1 Cartier Drive Franklin Park worker based in London. “I feel a great deal of people have high hopes for him.” After whining about how women’s watches are too small and insisting that 36mm might be the perfect size lookout for any lady, Ipersonally, Cara Barrett, have rediscovered my passion for small watches. I know, I know, the hypocrisy of it all! But that’s how style and fashion work — ebbs and flows, and all that. Watches aren’t any exception. So far as this new fascination with smaller watches is concerned, there’s one culprit to blame, and that’s the new Panthère de Cartier.Back in January, we saw Cartier re-release its iconic (and I truly mean that) Panthère de Cartier. This is a wristwatch that was first released throughout the Must de Cartier days as it was promoted to a glamorous 1980s clientele, and it has been a classic every since. When I saw this new edition, I realized the watch instantly and that I knew I had to get one on to my wrist for a review as rapidly as possible.Unlike the Tank, the Panthère isn’t quite a household name. First introduced in 1983 during the heyday of all opulence, the Panthère was commended for its sleek design, concealed clasp, and connected bracelet. It became a massive hit among the who’s who, women and men alike, with stars such as Pierce Brosnan and Keith Richards amongst the noted wearers (I’ll never not love the image of Brosnan under). During a period when Studio 54 was the most popular nightclub in town and glamor was all, it is not surprising that this opinion was a hit.