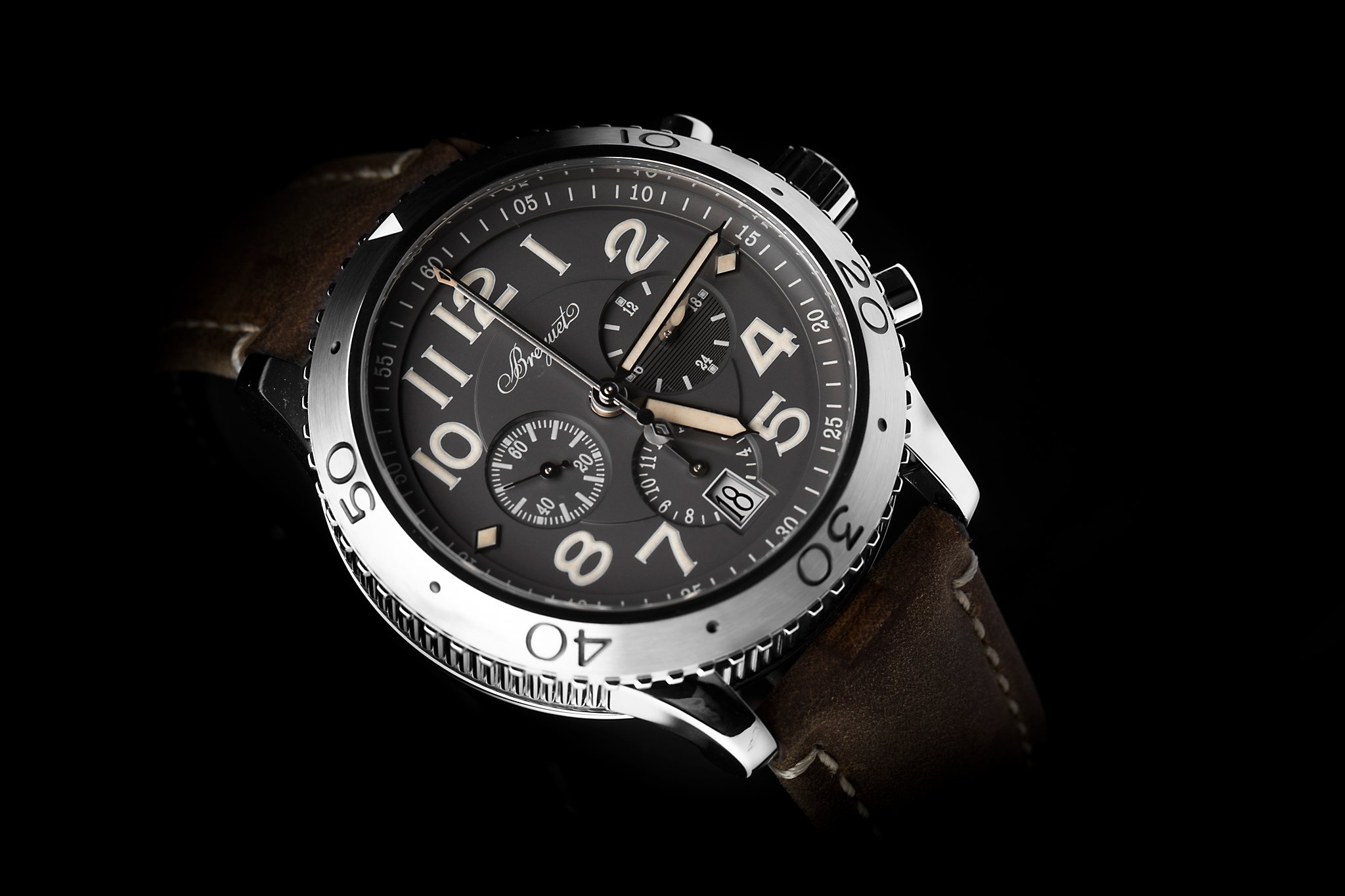 The watch industry’s biggest names have donated one-of-a-kind timepieces to the Only Watch charity auction in order to raise money for Duchenne Muscular Dystrophy research. The participating brands were given free rein to submit any design they desire, although red seems to be the color of choice in 2015. In its last edition, Only Watch raised just over five million euros, but will be hoping for a new record now the auction has been moved to Geneva under the supervision of the Phillips Auction watch department. Haute Time caught an early preview of the line-up for Only Watch 2015, which takes place on the 7th of November 2015.

A vintage-inspired Pilot watch at Only Watch? How odd, and how wonderful! Breguet has decided to unveil a one of a kind Type XXI 3813 made in platinum. The watch features a flyback function enabling an instant zero-resetting and restarting of the chronograph counter in one smooth move. Its beautifully textured and legible dial makes it a certain winner. The price of this watch will certainly take off quickly so make sure to sit tight when this lot is announced.

We met Melchior for the first this during Baselworld 2015, but the (not so) little guy is back for Only Watch 2015, and is suited for the occasion, with red shoulder blades. A 480-component mechanical table clock standing 30.3 cm tall and weighing 6.3 kg, Melchior brings out the inner child and, despite his heart of steel, provokes a smile in anyone he encounters. His body is composed of several moving parts including jumping hours and sweeping minutes, while a third dial in the abdomen provides information on his remaining energy. This unique piece is the 100th and final clock in the Melchior series.

Only a few months after it unveiled the Classic Fusion Enamel Britto, Hublot has decided to present a second model created in partnership with Brazilian artist Romero Britto. And this one’s even more vibrant than the original. This time, the ‘cloisons’ or cells have been sectioned to reveal the words “Only Watch” alongside the artist’s signature on the back. And for the very first time at Only Watch, this lot will be sold with an original piece of art signed by Britto of course. That’s two pieces of art for the price of one! Let’s see if the initiative is a success.

The thinnest mechanical watch ever made, the Altiplano 900P was launched in 2014 to celebrate the manufacture’s 140th anniversary. But Piaget has decided to brings its record-breaking watch back for Only Watch 2015, with a unique model with new red minute and hour hands and a special inscription at the back which reads: “Only Watch 2015, Unique Piece”.

The Stranger has delighted us over the years with some beautiful melodies, including Frank Sinatra’s “Stanger in the night,’ and Vivaldi’s “Violin Concerto in E.” For Only Watch 2015, the brand has decided to march to a different tune with Queen’s “We are the Champions,” rocking inside this musical watch. Its black titanium case and cherry blades set the mood.

For Only Watch 2015, Zenith is donating a unqiue version of this year’s El Primero “Lightweight” Tribute to the Rolling Stones, a watch that already has quite a few red accents on the chronograph hand and date. This time, the watch comes in a titanium black DLC case. The dial of this Limited Edition El Primero gives us a view of part of the movement along with the Zenith striking 10th sub dials, date display at 6 o’clock in addition to the hours and minutes at the center.

In search of a large donation, Bell & Ross has encased its gold into a pirate-themed treasure chest. The BR 01 Skull Bronze Tourbillon is a unique aged-bronze watch, made after the brand’s most iconic model. It features a hand-engraved gold skull inside a 46 mm case housing four complications: a tourbillon, a regulator, an accuracy indicator and a power reserve. Now that’s a treasure worth fighting for!

To encourage donations, IWC is innovating. For this year’s auction, the brand has developed solid boron carbide, a brand new material never before seen in the watch industry. The Ingenieur Automatic Edition Tribute to Nico Rosberg has been selected as the lucky recipient of the new material, which is almost as hard as diamond and as light as aluminum. Who said watch auctions were not meant for novelties?

If the Only Watch 2015 entry from Christophe Claret looks familiar, that’s because it borrows heavily from the Aventicum, a watch introduced earlier in the year. The Espoir & Paix once again features the brand’s mirascope technology to highlight an emerald set in the dial center. At the back, the watch features a portrait of Alfred Nobel with a green agate rim revealing the movement, as well as the names of the 129 Nobel Peace Prize laureates.

Laurent Ferrier introduced the Galet Square earlier this year, but already it is revisiting it for Only Watch 2015. This time, the Galet Square comes fitted with a special two-tone silvered sector dial typical of the late 1930s, and new lugs that appear straight to emphasize the watch’s singularity.

The Ocean Dual Time Retrograde Only Watch is the latest and most exclusive version of the brand’s dual time zone watch. For Only Watch 2015, the watch is engraved at the back with the words “Only Watch 2015 Unique Piece” and comes with a blue and black strap specifically designed for the auction.