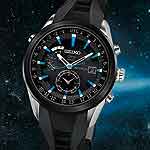 The Seiko Astron, released to great fanfare in 2012, tells time by receiving GPS signals anywhere on Earth. Was it a world-beater in our test? Click here to read our in-depth review of the Seiko Astron GPS solar watch, with original photographs by Robert Atkinson, first published in our April 2013 issue.
The last time Seiko called a new watch “Astron,” the future of timekeeping changed forever. Launched on Christmas Day, 1969, the original Seiko Astron watch was the world’s first commercially available quartz wristwatch. At the time, Seiko said of the Astron, “Someday, all watches will be made this way.” Today, it’s saying the same thing about the new Astron. Is Seiko right? Let’s find out.

If you have not read about it, the new Astron is an analog, solar-powered watch that receives GPS satellite signals and adjusts to the precise local time anywhere on Earth. It recognizes all 39 time zones, besting the top mechanical watches, which can display 37, with a manual reset. The Astron covers the globe by first determining its location using GPS, then comparing that information with an onboard database that divides the Earth’s surface into one million squares, each of which is assigned to a particular time zone. That is something no other watch can do.

The Seiko Astron differs from watches that receive terrestrial radio signals from atomic clocks. So-called RC (radio-controlled) watches receive signals when they are within range of stations in the United States, Japan, the United Kingdom, Germany and China, so they do not offer global coverage. The Astron works anywhere, even in the middle of an ocean or desert, in Antarctica, or on a Tibetan mountaintop. Seiko Astron watches also automatically recognizes which time zone they are in, while RC watches do not. The Astron also differs from Citizen’s limited-edition Satellite Wave, which receives GPS signals, but lacks a GPS geo-location function so it does not change time zones automatically.

Finally, though the Astron is a GPS receiver that knows precisely where it is, it can’t direct you to that new restaurant downtown, or tell you how far it is to the 14th green. It uses GPS solely to tell time.

Watches at Wimbledon: Who Wears What