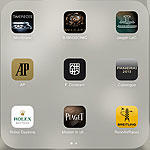 Though tablets such as the iPad arrived on the market just a few years ago, it is already difficult to imagine our lives without them, and the world of apps that complement them. But have you ever thought about how a tablet app could help you choose your next watch, or even help enhance your passion for watches in general?

Well, we have. Here, we offer you our evaluations of nine apps from major watch brands, explaining their major functions and presenting positive and negative aspects of each one. (All the apps are available in Apple’s iTunes store.)

Audemars Piguet
The app from Audemars Piguet, based in Le Brassus, Switzerland, allows access to the brand’s entire watch collection, with photos of all the models from various angles, and includes technical information about each of AP’s calibers.

Other options include a store locator; the most recent videos produced by the company; updated brand news; and a built-in watch function with a minute repeater synchronized with the exact time on your tablet. It allows you to listen to the same chimes as those in Audemars Piguet’s mechanical repeater watches; you can also download the hour-chime sound to use for messages or calls in your mobile devices. Breitling
The app from Breitling, a brand famous for its pilots’ watches, lets you do more than just appreciate Breitling watches and their complications. It takes you into an interactive airplane game modeled after the national championship of aviation races, the Reno Air Races in Nevada. The app lets you take part in a simulation of the race, in which circuits are defined by pillars installed in the middle of the desert and in which the aircraft reach speeds of up to 800 km/h. Bulgari
Bulgari’s app presents a 3D view of the Magsonic Grande Sonnerie Tourbillon watch. (This featured watch could be more modern; it was launched in 2010 and hasn’t had any updates since 2011.) On your iPad screen, you can operate some of the watch’s functions, including the minute repeater. It is an interesting experience for those who are unlikely to ever actually own such a timepiece. The user can also rotate the watch image to observe its details and understand the functioning of its mechanism a bit better. But don’t expect the greatest resolution. Fratello Classics: Which Watch Brands Are Most Likely to Increase in Value?