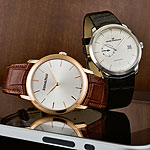 In 1966 — a year in which Switzerland’s cantons began debating voting rights for women and a Swiss referee made the controversial call that awarded soccer’s World Cup to England over Germany at London’s Wembley Stadium — the Swiss watch manufacturer Girard-Perregaux received the Centenary Prize from the Neuchâtel Observatory for extraordinary achievements in watchmaking. The winning timepiece incorporated two of the company’s inventions:  the self-winding Gyromatic system and a fast-beat caliber that achieved a frequency of 36,000 vph. Girard-Perregaux would soon afterward enter the history books by introducing Switzerland’s first mass-produced quartz watch, which essentially made its mechanical high-frequency watch obsolete. In 2006, Girard-Perregaux introduced its 1966 collection, named to commemorate the Observatory award.

Audemars Piguet’s Caliber 2120 debuted in 1967. With a thickness of only 2.45 mm, it remains one of the world’s thinnest automatic movements. The company had been making thin movements since 1946, when it introduced a hand-wound movement measuring only 1.64 mm thick, followed by the Cal. 2003, the “extra-flat,” whose skeletonized version was presented in 1953. Caliber 2120 was a joint project between Audemars Piguet, Vacheron Constantin, Jaeger-LeCoultre and Patek Philippe. Though Jaeger-LeCoultre actually produced the movement, with financial and technical assistance from the other three, Audemars Piguet owns exclusive rights to it today and uses it to power its Jules Audemars Extra Thin watch.

In light of the watch world’s renewed interest in slim, elegant timepieces, we took a closer look at the Jules Audemars and the 1966, which both exemplify the trend. (Click on photos for larger images.) A view through the sapphire caseback of the Jules Audemars reveals Caliber 2120’s distinct, elegant lines and beautiful finishes. The movement is equipped with an unusual winding system. The 21k-gold winding weight is fastened to the rotor with screws. The weight drives the winding system in a way that keeps the barrel at an ideal level of performance. The mainspring supplies its energy in a constant manner and this promotes greater rate precision. However, on the timing machine,  it did not exactly produce the results we expected. When fully wound, the watch gained 3.1 seconds per day. After running for 24 hours, it gained 1.5 seconds per day. These were very good results on average, but the maximum differences between the rates in various positions were very large, 17.1 seconds and 24.5 seconds, respectively, when the watch was fully wound and after 24 hours. However, few who wear this watch will be bothered by these differences, or even greatly notice them, because the Jules Audemars has neither a seconds indication nor a hack mechanism.

The most special feature of the Jules Audemars’s barrel bridge is the so-called “flying” barrel design, which contributes to the thinness of the movement and still ensures a power reserve of 40 hours, unusual for a watch so slim. The winding is bidirectional thanks to a reverser. In the interest of keeping the watch thin, the designers did not use a ball bearing. The lateral play of the rotor’s oscillating weight is limited by a peripheral ring rolling on four jeweled runners fixed to the mainplate. This produces a distinctive sound when the rotor is moving. The balance, with its variable moment of inertia, is adjusted with six inertia blocks. It vibrates at a frequency of 19,800 vph.

The 2120 movement has been carefully finished. It is fully assembled and decorated by hand in Audemars Piguet’s workshops, and the quality of the workmanship is plain to see. The bridges are beveled and polished by hand, the surfaces are decorated with côtes de Genève, and the cutouts have a perlage finish. The flanks of the bridges have a matte surface and the recesses for the jewels are diamond-cut. Even the edges and slots of the screw heads are beveled. The mainplate has a perlage finish on both sides. The perlage  has a three-dimensional look thanks to the use of two different diameters on the grinding tool. The gold rotor provides the crowning touch to the movement, with the masterfully skeletonized “AP” initials within. In terms of beauty, Girard-Perregaux’s Caliber 03300-39 could give the 2120 a run for its money. A glance through the sapphire caseback reveals fine decorative finishes on a par with those of Audemars Piguet’s movement: a 21k-rose-gold rotor with circular côtes de Genève finish and straight côtes de Genève on the bridges beneath the rotor. The perlage pattern on the mainplate, rotor and pallet bridge suggests a starry sky. Caliber 03300-39 is derived from the 3300/3000, which Girard-Perregaux developed in 1994. Today it serves as a base for a number of watch movements with various functions and complications, like the date indication and small seconds display in this one. These additions, unavoidably, make the movement a bit thicker than the 2120. And because the Girard-Perregaux movement is newer, it contains more modern features.

The watch’s technical highlights include its motion works, its rotor and its escapement, which has several unusual features. The motion works mechanism encompasses only four wheels, which prevents imprecision when the hands are set. In contrast to the Audemars Piguet watch, the Girard-Perregaux 1966 can be set accurately thanks to its small seconds display and hack mechanism.

The rotor for the winding mechanism is unidirectional and works counterclockwise. With a transmission ratio of 120:1, it is somewhat more efficient than other unidirectional rotors. The debate about the merits of unidirectional vs. bidirectional self-winding systems is never-ending. Girard-Perregaux, however, has been devoted to the unidirectional system ever since it introduced its well-known Gyromatic winding mechanism in 1965. The 03300-39 rotor sits on a small bridge that has a perlage finish and is held in place by two blued screws. Beneath the bridge, the rotor’s pinion meshes with a click wheel that transmits power to the barrel in the direction of the turning rotor, via additional wheels (reduction and transfer), and then freely turns in the opposite direction. The escapement has especially modern features. The escape wheel (which has steeply sloping teeth) and the pallet are mounted beneath a common bridge that is attached to the mainplate rather oddly, with two differently sized blued screws. The entry and exit stones are identically shaped. The flat Nivarox-1 hairspring is attached to the Glucydur balance using a laser and Nivatronic collet. The balance vibrates at 28,800 vph. On the timing machine, the watch gained two seconds per day when fully wound and six seconds per day after running for 24 hours. When worn on the wrist, the watch gained about four seconds per day. (Unfortunately, because the Jules Audemars watch has no seconds indication, we could not measure its on-the-wrist performance.)