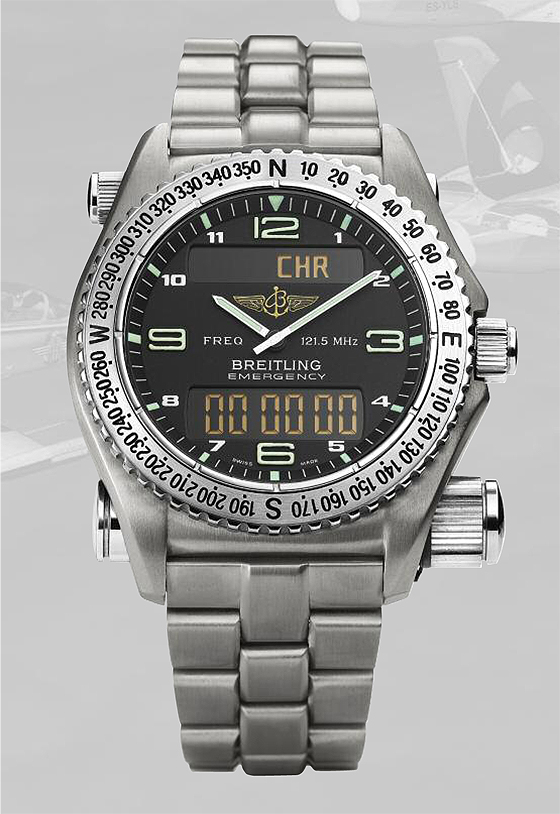 Pilots rely on Breitling’s chronographs, but calendars, world timers and divers’ watches also are part of the brand’s 130-plus-year history. Here are five important Breitling watches that helped define the brand’s identity from 1915 through the modern day.

Launched in 1941, the Breitling Chronomat was based on a patent document that Breitling submitted in 1940: patent number 217012 granted protection for an instrument-style wristwatch with a circular slide rule. This clever system made it quick and relatively easy to perform various measurements and mathematical operations, e.g., the conversion of speeds or distances from one unit of measurement to another, multiplication, division, and cross-multiplication. This new timepiece attracted many aficionados in sports and industry, and technicians appreciated its special features, which made their work easier. Later versions of the Chronomat with different cases and dials were the earliest ancestors of Breitling’s legendary Navitimer. The watch shown here contains Venus Caliber 175. A special feature of this watch is a counter for 45 elapsed minutes – a detail welcomed by soccer fans.

Don’t be misled: this watch’s name, which was trademarked in 1955, has nothing to do with the navy. The Breitling Navitimer, which debuted in 1952, was designed to help pilots coordinate time and navigation: it was equipped with calculating functions. Advertisements described this multifunctional device, which contained the hand-wound Caliber Venus 178, as a “personal onboard instrument.” The built-in slide rule enabled aviators to multiply and divide, convert nautical miles to land miles, and calculate averages, fuel consumption, average gain of altitude, and distances during ascent and landing. Fumbling with paper and pencil while in flight could be at least partially eliminated. Since it was introduced, the Navitimer has undergone various changes, mainly to its case and the calibers it housed, i.e., hand-wound, hand-wound with date, or self-winding, but no one has ever tampered with its most distinctive feature: its circular slide rule.

Sales of chronographs declined markedly during the second half of the 1960s. Breitling and its competitor Heuer formed a partnership to develop the first automatic chronograph and hoped that its launch would help counteract the downturn. The adventure began in 1965, when the two firms, along with Büren Watch and Dubois Dépraz, signed a contract to develop the watch; they called the venture Project 99. Büren was taken on as movement supplier because of its experience with micro-rotors. No other type of self-winding caliber could permit the rearward and thus service-friendly installation of the specially developed chronograph module because the small oscillating weight didn’t interfere with the two arbors of the elapsed-time counters. Furthermore, the date ring was positioned directly under the dial. Modular architecture also made it possible to install the crown on the left side, where it clearly showed that this was a self-winding watch. Breitling and Heuer (now TAG Heuer) were responsible for the design, the dials, the cases and the other components. The first prototypes of Caliber 11, which ran at 19,800 vph, were available in the spring of 1968. The official launch of theBreitling Chrono-Matic, the world’s first automatic chronograph with micro-rotor, took place simultaneously in Geneva and New York on March 3, 1969. When the curtains rose, the project had already consumed about half a million Swiss francs.

The Breitling Emergency, which debuted in 1995, was designed to save lives in critical situations. The Breitling Emergency was developed in collaboration with professional pilots. Breitling equipped the flip-open case of this big titanium watch with a micro-transmitter set to the international air distress frequency of 121.5 MHz. The transmitter of the Breitling Emergency could send signals via an extendible wire antenna if the wearer needed help. Once activated, the transmitter would repeatedly emit a 0.75-second impulse every 2.25 seconds. If transmitted from flat terrain, the signal could be received within 160 kilometers (99.4 miles) of the disaster site by search planes flying at an altitude of 6,000 meters (19,685 feet). Two lithium batteries in the Breitling Emergency provided enough power to keep the transmitter operating for 48 hours. The electronic time-measuring module, which could measure elapsed intervals to the nearest 1/100 of a second, also had a countdown function, an alarm, and a time display in a second zone. This information was shown in digital form. Pilots in aerobatic squadrons from many nations chose to wear these watches. (Clickhere to read about the newest version of the Emergency, the Breitling Emergency II.)

Breitling’s headliner for 2012 followed in the footsteps of its world-timerUnitime, which made its debut in 1951. From a technical and functional standpoint, the new watch, the Breitling Transocean Chronograph Unitime,was light-years ahead of its historical predecessor. The improvements began with the self-winding manufacture chronograph movement and continued with the mechanism under the dial. All indicators could be set and adjusted, either forward or backward, via the crown. When a traveler reaches his destination, he rotates the new reference city to 12 o’clock. This action triggers the central hour hand, the date display and the 24-hour ring to reset themselves automatically; only the minutes and seconds hands continue to run unaffected. The technicians also thought of daylight savings or summer time: they included little sun symbols on the city ring that could be used to make one-hour corrections. Breitling offers the city ring with the cities’ names written in several languages. The 46-mm case is water resistant to 100 meters and, like all Breitling watches, is COSC certified. For more detail on the Transocean Chronograph Unitime, click here.

To read the entire list of 20 milestone Breitling watches, including the stories behind iconic watches such as the Breitling Superocean, Breitling Avenger and Breitling Cosmonaute, download the article for just $2.99 from the WatchTime online shop.