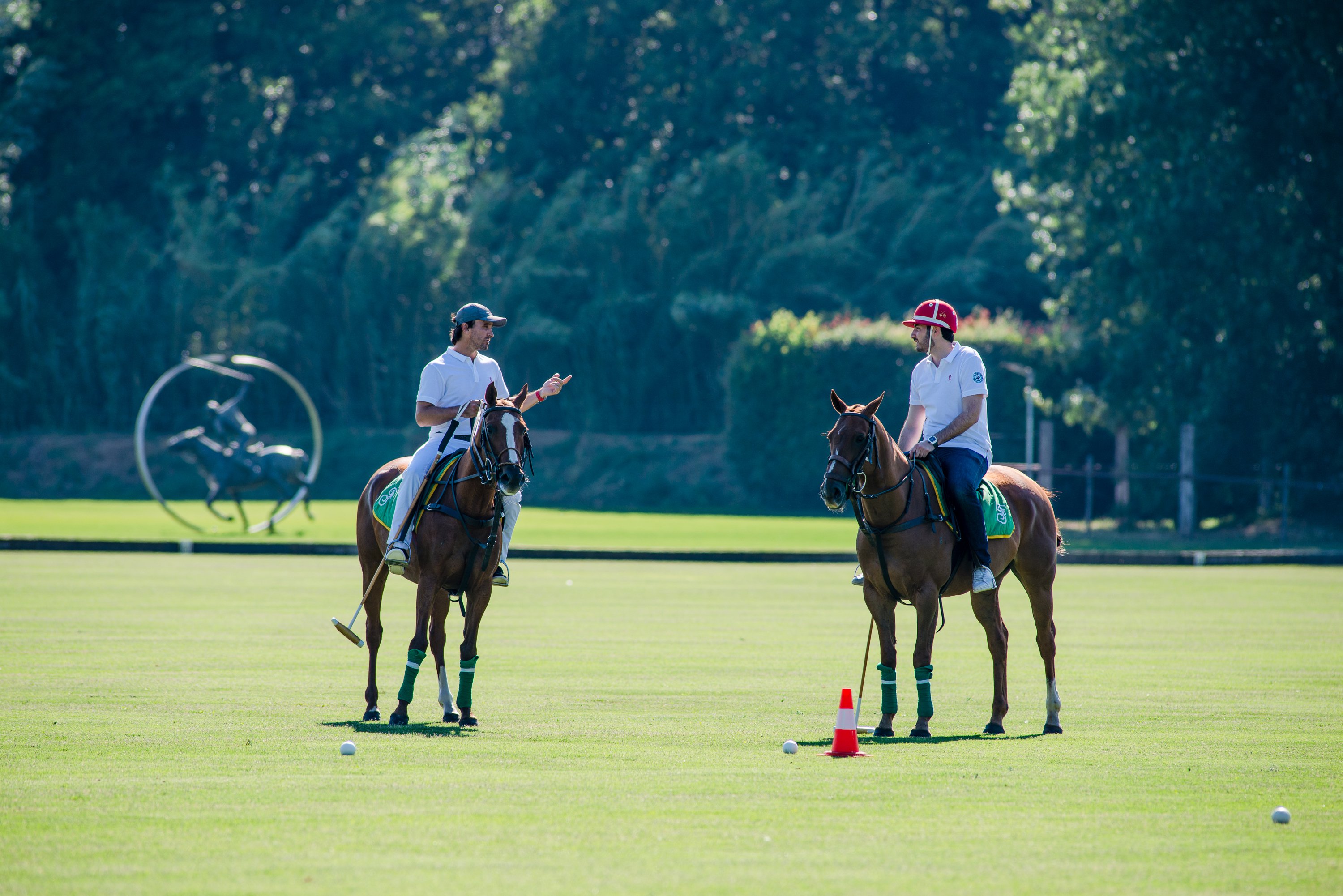 Learning a new sport can be daunting. Especially when the sport involves hurling yourself at breakneck speeds on the back of a horse. Thankfully, I would be receiving a beginner’s lesson in Polo from a man who knew how to ride horses before most boys could bicycle.

Pablo Mac Donough was only four years old when he climbed onto a saddle and held the reigns for the first time. The son of a Polo horse breeder, he says there was no escaping the sport. His older brother, Matias, had already taken it up, so naturally he signed up in the “Nueva Escocia Polo Ranch” to give his sibling some competition.

“It’s a family affair,” says Mac Donough with a wry smile, as we canter around the Polo Club Saint-Tropez. The sport is incredibly popular in his country, where most boys who grow up on a farm with horses, “don’ have much in the way of grabbing a mallet and playing a few chukkers.” They just need four players on each team, and two sets of goal posts.

Today, the Argentine is considered to be the world’s number one player, and he competes worldwide to increase the visibility of Polo. His wife and kids travel with him as much as they can, following him on the road seven months a year as he competes in a series of international tournaments form Argentina to Singapore.

“It’s a way of life,” says Mac Donough. His love for the game does not end at the final whistle. Even today, when there is nothing at stakes and he is playing with someone whose last horse-ride was a spin around the local merry-go-round, Mac Donough’s inner child races around the field in search the first of many goals.

Know as the sport of kings, Polo has drawn royalty to its ranks, many of which finance the sport. Professional Polo costs millions of dollars, and requires the participation of wealthy amateurs called patrons.

But luxury brands, such as Richard Mille, are joining the sport, and beginning to ease the pressure, making it possible for players of Mac Donough’s caliber to compete on the field at the highest level. The Argentine was introduced to the Swiss watchmaker through the Prince Bahar Jefri of Brunei, a close friend and occasional teammate.

High-end timepieces have been around Polo clubs for decades, and one of the watch industry’s most iconic pieces, the Jaeger-LeCoutre Reverso, was even designed by request for British soldiers wishing to protect their watches during a polo game.

In 2012 Richard Mille injected some cool with the limited edition RM 053 Pablo Mac Donough, a watch featuring a high-end tourbillon protected by a totally unique titanium case, a watch “that only Richard can make,” said Mac Donough.

The watch “raises eyebrows inside Polo clubs around the world,” but the conversations it creates are one among the great joys of owning the Richard Mille RM 053 Pablo Mac Donough Tourbillon. “I love the look of the watch. It’s something new, different, and very bold,” said Mac Donough. These are the values of Polo. “As a competitor, you have to be brave, and aggressive, because the sport itself it that way.”

While I gave it my best shot, it became abundantly clear that a good bit of skill is also a pre-requisite of the sport.

The “real work,” for Mac Donough happens off the field. Countless hours are spent with the horses, which are bread specifically for the sport. The horses are well-oiled engines, just like the one sitting on Mac Donough’s wrist every match. “It’s all in the details,” he says.

Photo Credit: Haute Time. For more information, please visit the official Richard Mille website. Follow Haute Time on Instagram to catch all of the new releases as they happen.