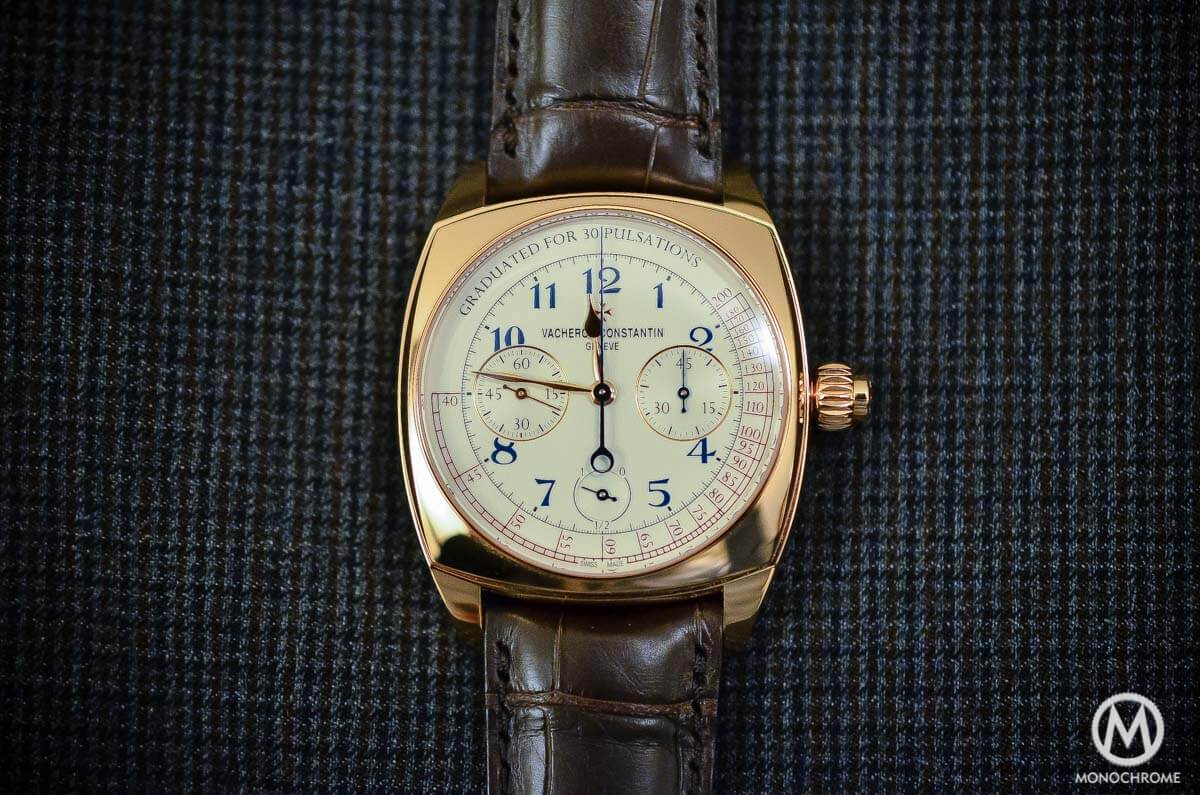 Recently, we’ve been impressed by Vacheron-Constantin. Not that the Geneva-based manufacture is not used to create interesting watches (really, we’re far from that), but the latest collection that they showed during the SIHH 2015 was both visually and technically stunning. We first felt that only by seeing the press photos of the entire collection (that you can see here) but mainly later, when having the flagship edition on the wrist, the Harmony Ultra-Thin Grande Complication Chronograph Caliber 3500. It’s time now to have a closer look at the watch that is possibly the best compromise, the Vacheron-Constantin Harmony Chronograph Calibre 3300.

It’s not often that an old Maison like Vacheron-Constantin launches an entirely new collection of watches. Until the 2015 Edition of the SIHH, Vacheron-Constantin was used to improve its classical collections with new editions (like the sporty Overseas or the elegant Patrimony) or with specific limited editions (like the vintage-inspired Historique American 1921). However, 2015 is a kind of special year for the manufacture that celebrates its 260th anniversary, making it one of the oldest manufactures – only Blancpain is older as created in 1735 but with a non continuous activity. And do remember that Patek Philippe is only 175 years old. For the occasion, Vacheron-Constantin decided to strike firmly with watches that both respect the traditions and that also bring a superb horological content. This collection is called Harmony and here are the several editions launched (that you can also discover here): 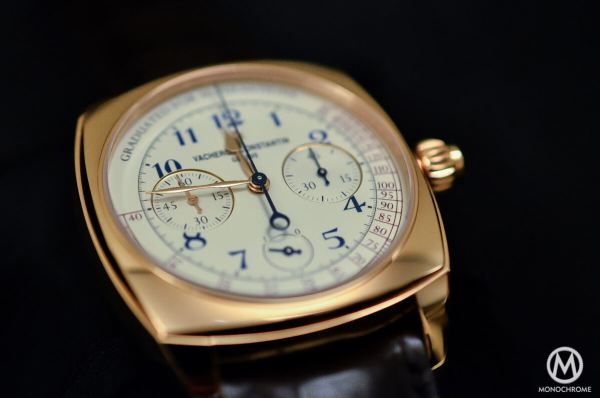 The edition we decided to review more closely is the one that we believe to be the best compromise, the one that is the most balanced, the one that shows the greatest interest movement-wise – not the most complicated for sure but the one that will answer industrial and economical challenges. The Vacheron-Constantin Harmony Chronograph Calibre 3300 is right in the middle of the collection, in-between the superb but inaccessible Calibre 3500 and Calibre 3200 and the too simple Dual Time. But mainly, this watch follows the latest trend of the industry that requires proper manufactures to have their own in-house traditional manually-wound chronograph movement. Patek did it in 2009 with the Calibre CH 29-535. Lange uses its own movement in the Datograph since its introduction.

It was now time for Vacheron to have its in-house chronograph movement, replacing the Lemania-based movement used for example in the Patrimony Traditionnelle Chronograph Paris Boutique. Thus, as nice this new watch could have been, having this new movement puts it on an entirely different level. You have to keep in mind how long, complicated, costly and difficult is the development of a chronograph movement (that’s why some brands like Breguet or Audemars-Piguet are not using in-house movements). This Calibre 3300 will certainly not only be seen in this 260-piece limited edition of the Harmony but it will most likely be used in the future, in several other watches, as a base for the new standard manually-wound chronograph calibres.

The story of the Calibre 3300 started in 2008 – yes, 7 years… we told you, developing a chronograph movement is long and it’s not because the Swiss are said to be slow! A chronograph is certainly one of the most complicated architecture possible, as multiple gears, levers, brakes, clutches and wheels have to be designed and assembled very precisely. On the other hand, in order to stay in the race against other big names of the industry – such as Patek, the historical competitor – Vacheron-Constantin had to bring its own movement on the market. Not that the Nouvelle-Lemania based movement was obsolete, but for marketing and commercial reasons, it is now a credibility argument to have an in-house chronograph movement. 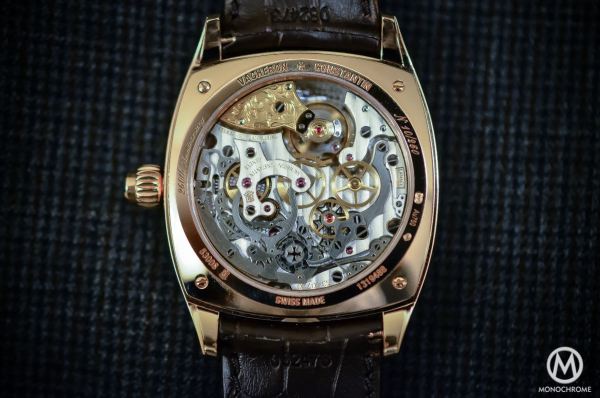 At first sight, this Calibre 3300 is all about traditions and feels like known. Its architecture is indeed reminiscent of several other manually-wound chronograph movements (and close to the old Lemania-based one too). However, it has to be said: a chronograph won’t be fully reinvented! Its architecture is such that many chronograph movements have the same overall look (take a look at a Minerva or a Patek CH 29-235). On the other hand, this Calibre 3300 is also unique in several ways. Despite its traditional layout, it’s an entirely new movement. It’s also one of the few mono-pusher chronographs available on the marker. Finally, it features several technical delicacies: 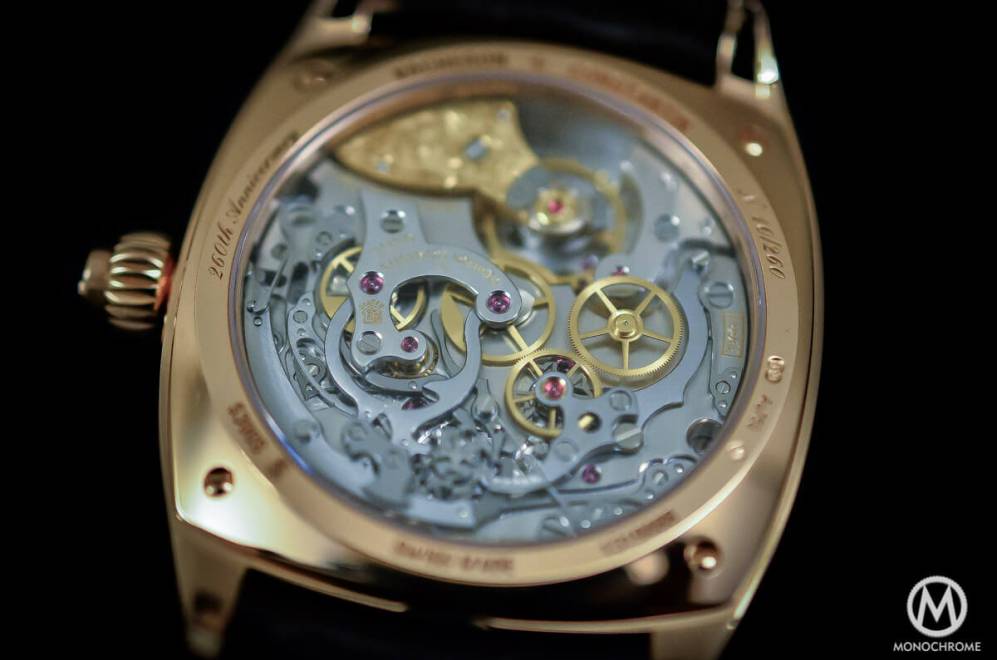 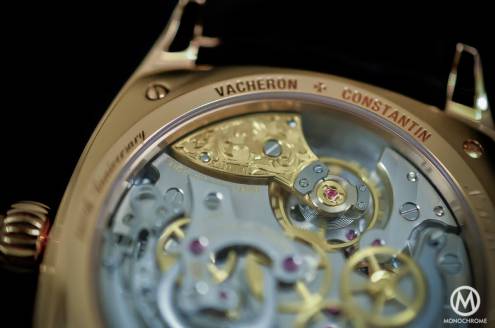 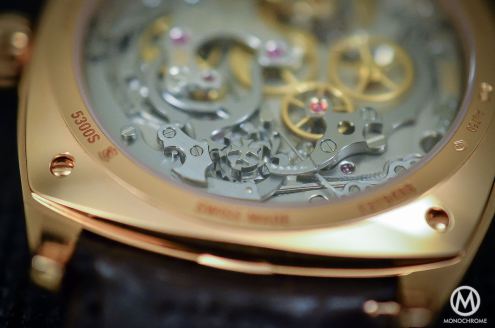 Now if we move to the functions of this movement, we’re in front of a very classical proposition. It’s a manually-wound calibre, with a bi-compax layout. It features a small second sub-dial at 9 and a 45min counter at 3 (rather than the usual 30min counter). One regret concerning this minute counter: the hand is a dragging one and not a jumping one – which makes the reading a bit more complicated. It’s surprising that Vacheron-Constantin came with such a feature. The Calibre 3300 also features a power reserve indicator located at 6 – that will give the wearer an overview of the remaining amount of energy available, knowing that the Vacheron-Constantin Harmony Chronograph boasts a comfortable 65 hours power reserve.

Visually, this calibre is a feast for the eyes. As required by the Hallmark of Geneva (that is stamped on the hammer bridge), finish is up to very high standards. All the parts are terminated by hand with polished bevelled angles on the bridges and chronograph levers, Geneva Stripes on the bridges, straight graining on the steel parts, polished screw-heads and bevelled screw-slots, chamfered wheel-spokes and circular graining on the entire main plate (both on the movement and dial side). A specific feature of this Vacheron-Constantin Harmony Chronograph Calibre 3300 is the floral engraving applied on the cock-bridge (inspired by the arabesques that adorned the world’s oldest pocket watch belonging to the Maison and signed by Jean-Marc Vacheron in 1755). This feature is unique to the watches created for the 260th anniversary and will probably not be used in the future standard watches that will include this movement. Its execution is very clean and detailed and brings a nice luxury touch to the movement. Finally, you can also expect this calibre to be precise (the Hallmark of Geneva requires the watches to pass the COSC certification). 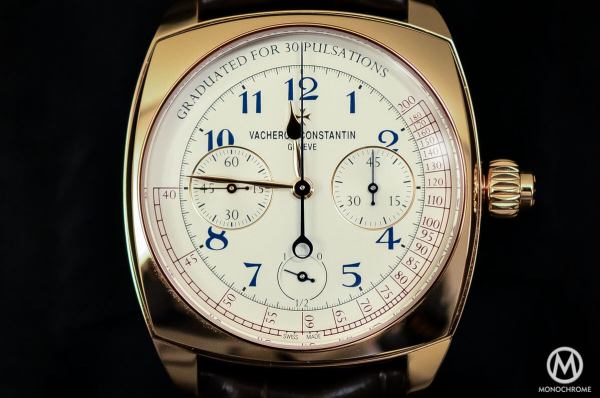 Enough of the technical insights… This movement is cased in watch – and a very elegant and nicely designed one. First, its dial reflects (as for the movement) a great respect to traditions. This Harmony collection is inspired by a vintage doctor’s monopusher chronograph created by the Manufacture in 1928 (see here). This antique edition came with a bi-compax layout and a pulsometric scale, two features that we find back in the Harmony – see the scale around the dial with ‘graduated for 30 pulsations’. The hands are also using a vintage approach with a spade shape (also reminiscent from the 1928 doctor’s watch). All the printings (including the big blue numerals) are also very traditional and the overall render is elegant, discreet and luxurious. 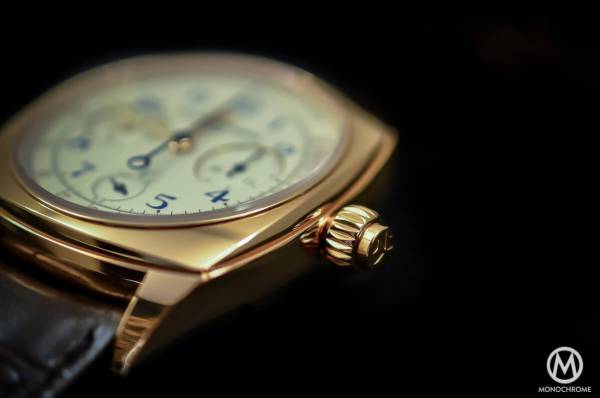 Again, as its 1928 source of inspiration, the Vacheron-Constantin Harmony Chronograph features a cushion-shaped case (here made of 18k rose gold). The lugs are fully integrated in the casebands without any discontinuance, creating a smooth profile but also a rather bulky shape. Considering that the watch measures 42 mm x 52 mm, 12.81 mm, a bit of thinness (or a separation between the case and the lugs) would have been pleasant, in order to lighten the case. However, the Harmony remains an elegant and classy chronograph that will be perfectly usable with dressy attires – a feeling that the monopusher constructions emphasizes. 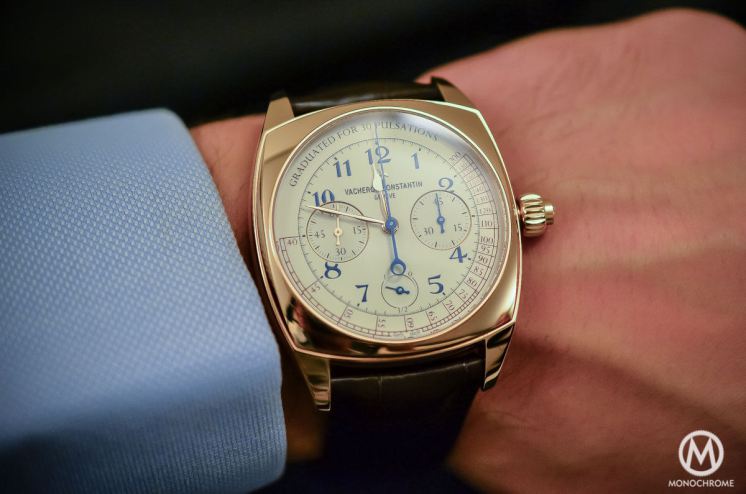 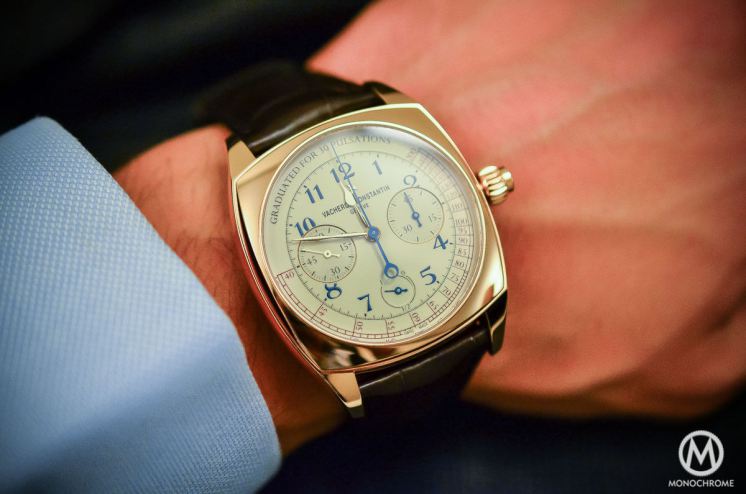 On the overall, this Vacheron-Constantin Harmony Chronograph Calibre 3300 is a timepiece that is already interesting on its own. The construction and finish are superb and delicate and the look is elegant and classy – even if a bit bulky for us. This would have been a nice novelty alone but we have to consider the introduction of the new manufacture movement that sets the brand back in the game. Vacheron is now armed to face the other heavyweights of the industry with a movement that is perfectly finished, very pleasant to look at and technically interesting. The respect to the old traditions of watchmaking is a plus for us and we’d love to see this Calibre 3300 in future collections (in non-limited editions and with watches priced more reasonably). The Vacheron-Constantin Harmony Chronograph is priced at 74.300 Euros. More on Vacheron-Constantin.com and on the brand’s own forum, the Hour Lounge.