As we begin this new series — in which we look at modern-day versions of classic watch models through the eyes of a vintage-watch fan — I think back to all the iconic watches that have achieved their “classic” status through either revolutionary design or historical impact; what I am beginning to theorize is that to truly reach the level of “classic,” a watch must have both. The Audemars Piguet Royal Oak is one of these pieces, and its success is a testament to not only the innovation AP put forth in the 1970s, but also to the continuing homage the brand plays to Gérald Genta’s original design. Today, there are 56 variations of the Royal Oak, and 81 if you also include (and I will offer reasons why I believe you should not) the Royal Oak Offshore collection. All of this culminates into a signature watch that has survived more than 40 years, and continues to define the Audemars Piguet brand. 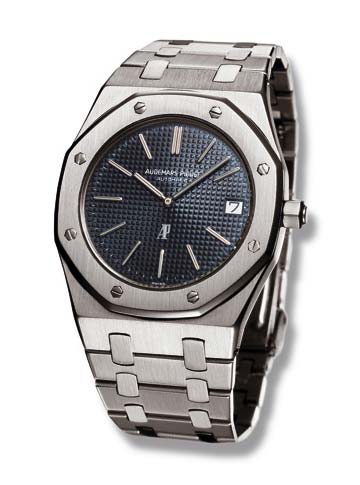 The first watch we’ll look at is the contemporary Royal Oak, Ref. 15202ST, also known as the “Jumbo.”  It is crafted in a 39-mm octagonal stainless steel case using sapphire crystals to protect, and show off, both the dial and movement. The rotor, which supplies power to AP Caliber 2121 (particularly noted as being exclusive to the “Jumbo”) adds to its relative thinness, at 8.1 mm. The dial is in the brand’s standard blue and bears a “Petite Tapisserie” pattern. Be sure to pay special attention to the “AP” above the 6 o’clock mark— this subtle addition is one of many paying tribute to the Royal Oak’s heritage. The retail price fluctuates around $22,000, a price AP justifies by citing the comparative rarity of this model, and by its capturing the spirit of the original Royal Oak sports watch. 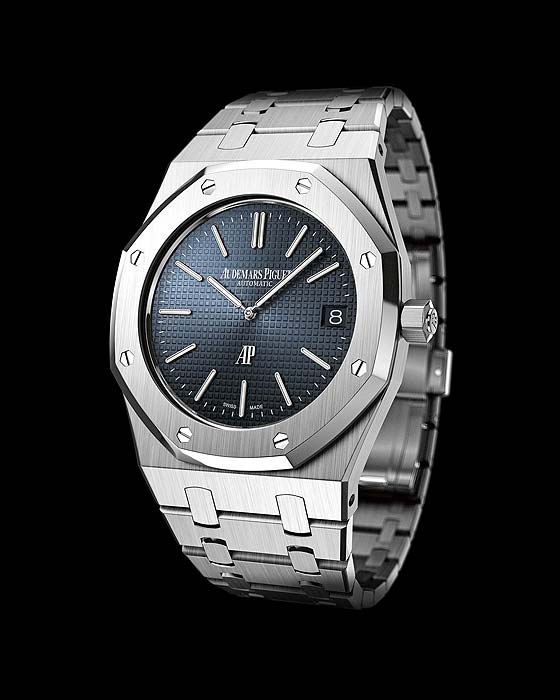 As a “vintage guy” with small wrists, I don’t usually go to Audemars Piguet (whether vintage or new) as my “grail” brand. With that said, the modern Royal Oak does an excellent job of keeping to the original watch’s heritage while continuing to innovate. To an untrained eye, a Ref. 5402 (the original reference) next to a Ref. 15202 might appear to be exactly the same watch. The 15202 uses the same movement, same materials, same general design, and same level of attention to quality finishing on the bracelet and case. All of this is by design, for the revamping of a watch just a few years past its 40th birthday. In a way, the watch being so similar to the 5402 is almost an innovation in itself. The most noticeable difference between the pieces is the skeletonized caseback on the 15202, which allows the owner to view the intricately decorated, powerhouse movement that first helped generate this collection’s success. If I had bigger wrists — and a bigger wallet — I would certainly consider this one. 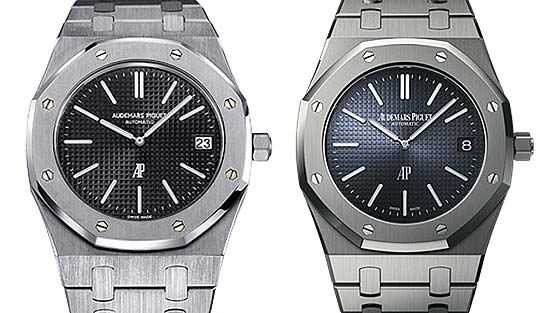 The second watch I want to look at is the much more contemporary Audemars Piguet Royal Oak Offshore chronograph collection, specifically the Ref. 26470ST. This watch is 42 mm in diameter, also with a stainless-steel, octagonal case with a sapphire crystal for dial and caseback, and utilizing black ceramic for the crown and pushers. The dial uses the same Royal Oak blue but in this case with a “Méga Tapisserie” pattern. There is a circular window for the date, oversized white Arabic numerals, and orange accents for the tachymeter scale and the hands. The movement is the much thicker AP Caliber 3126 (14.20 mm), and the whole thing is strapped up on a blue rubber strap. You can find this watch starting at $20,500. 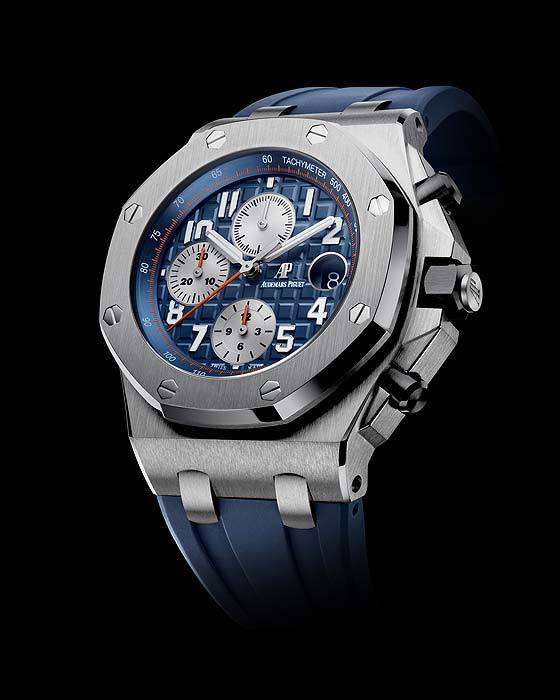 The Offshore, as shown in nearly every detail, would barely register as a Royal Oak to a purist. Of course, if you look closely, you can identify similarities in the case, the dial, and the hands, but this watch seems to me be more a reinvention of the original design by Gérald Genta rather than a reinterpretation of it. The watch is massive on even a large wrist, and to me doesn’t seem to have a specific purpose. With a water resistance of 100 meters, a functional rubber bracelet that clashes with the look of case, and giant numerals, the Offshore seems to be at its core a divers’ watch, but then what is the chronograph for? Audemars Piguet is not known for making “humble” watches, but this model takes that to a new level.

In 1971, when the original Royal Oak was being developed, the people in charge at Audemars Piguet knew that if that watch was not successful, their house of horology was rushing into bankruptcy. Luckily, the brand released what turned out to be a widely popular response to the Quartz Crisis and at the same time proved that one could sell a sports watch at a luxury price. The Audemars Piguet “Jumbo” 15202ST continues this heritage, and is worn by many with pride in what it represents. On the other hand, to this “Vintage Eye,” the Offshore 26470ST is a model that appears to have lost touch with what made the brand special. All in all, I’m excited to see where Audemars Piguet goes next with the Royal Oak, and even more excited for the discussion it is sure to generate.

Caleb Anderson is the Director of Outreach at the online vintage watch boutique theoandharris.com. Since starting at Theo & Harris, he has garnered extensive knowledge on vintage watches, and spends much of his time sharing his opinions within the field. Currently located near New York City, he is a persistent student in all things historical, a writer on watches, and a casual runner.