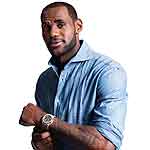 1. It’s not what one usually expects in a star athlete-branded sports watch. “King James’s” Audemars Piguet is not predominantly black; it does not display his current team’s colors or his jersey number; it has no obvious references to his sport (i.e., the baseball counterweight on the seconds hand of Randy Johnson’s Ulysse Nardin or the basketball pattern on James’s teammate Dwyane Wade’s Hublot); and it’s not even overly large (the case is a relatively modest 44 mm in diameter). The color scheme choice of light gray (in certain light, it appears almost off-white) for the dial and alligator strap, combined with rose gold, came from James himself. The Miami Heat Star is known for being intense off the court but stylish off it, and for the watch bearing his name, he chose to go with a more “off-court” look, a watch he could wear with a tuxedo. “I love the strap,” James states in Audemars Piguet’s release. “We talked a lot about the possibilities and I thought gray would be the perfect color. At first you don’t really think pink gold and gray will work together, but when you match it up with this watch and this style, it’s a perfect combination.” 2. Its got a touch of bling — but just a touch. LeBron not only wanted to go stylish over sporty, but also, unlike some other celebrity-endorsed timepieces, subtle over showy. The chronograph push-piece at 2 o’clock is the only place on this Audemars Piguet Royal Oak Offshore watch that is, almost discreetly, set with diamonds. Both push-pieces, as well as the winding crown, are made of black ceramic. The diamond-set chrono pusher offers just a hint of ostentation.

3. The case combines two rarely combined materials. The watch is still instantly recognizable as a Royal Oak Offshore, with its famous octagonal case and “mega-tapisserie” patterned dial. The case is in 18k rose gold and also features a brushed titanium bezel, with the traditional eight screws, which echoes the gray tones in the dial and strap. The push-piece guards combine rose gold with gray rubber. The sapphire crystal has a glareproof coating. The case is water-resistant to 100 meters. The applied Arabic numerals and hands are also in 18k rose gold.