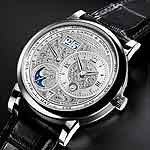 Hong Kong’s inaugural “Watches and Wonders” salon, held September 25-28, featured 13 luxury watch brands, several of which launched significant new models at the fair. Here is a look at three of them, a perpetual calendar with tourbillon from A. Lange & Söhne, and minute repeaters from Vacheron Constantin and Audemars Piguet.

A. Lange & Söhne, the only German watchmaker to exhibit at Watches and Wonders, unveiled its extremely limited (15 pieces), immensely complicated, and intricately decorated Lange 1 Tourbillon Perpetual Calendar Handwerkskunst. Like the original version of the watch released last year, this one has a perpetual calendar that features Lange’s patented peripheral month ring, as well as indications for the date, day, leap year, and moon-phase, all of which advance instantaneously. The tourbillon mechanism has a patented stop-seconds function that can be observed from the back of the movement.

The “Handwerkskunst” moniker refers to this limited edition’s dial, made of solid white gold and decorated by hand with tremblage and relief engraving; to the hand-painted blue numerals on the big date display (a Lange first); and to the numerous decorations on the movement, Lange’s manufacture Caliber L082.1. The tourbillon itself features relief engraving done by hand, as do the intermediate-wheel cocks and the large, 21k gold rotor with a platinum centrifugal mass. A solarization technique is used for the three train bridges, and a specular polished finish highlights the tourbillon cage. The movement also includes four screwed gold chatons and a diamond endstone bearing for the tourbillon.

The watch has a 41.9-mm platinum case, with the brand’s signature and a limited-edition number engraved on the caseback. It comes on a hand-stitched black crocodile strap with a platinum deployant buckle. The Lange 1 Tourbillon Perpetual calendar Handwerkskunst will be available exclusively through A. Lange & Söhne’s 11 international boutiques. (Photos can be enlarged with a click.) Concept to Caliber: The Story Behind Audemars Piguet’s Manufacture Caliber 3120