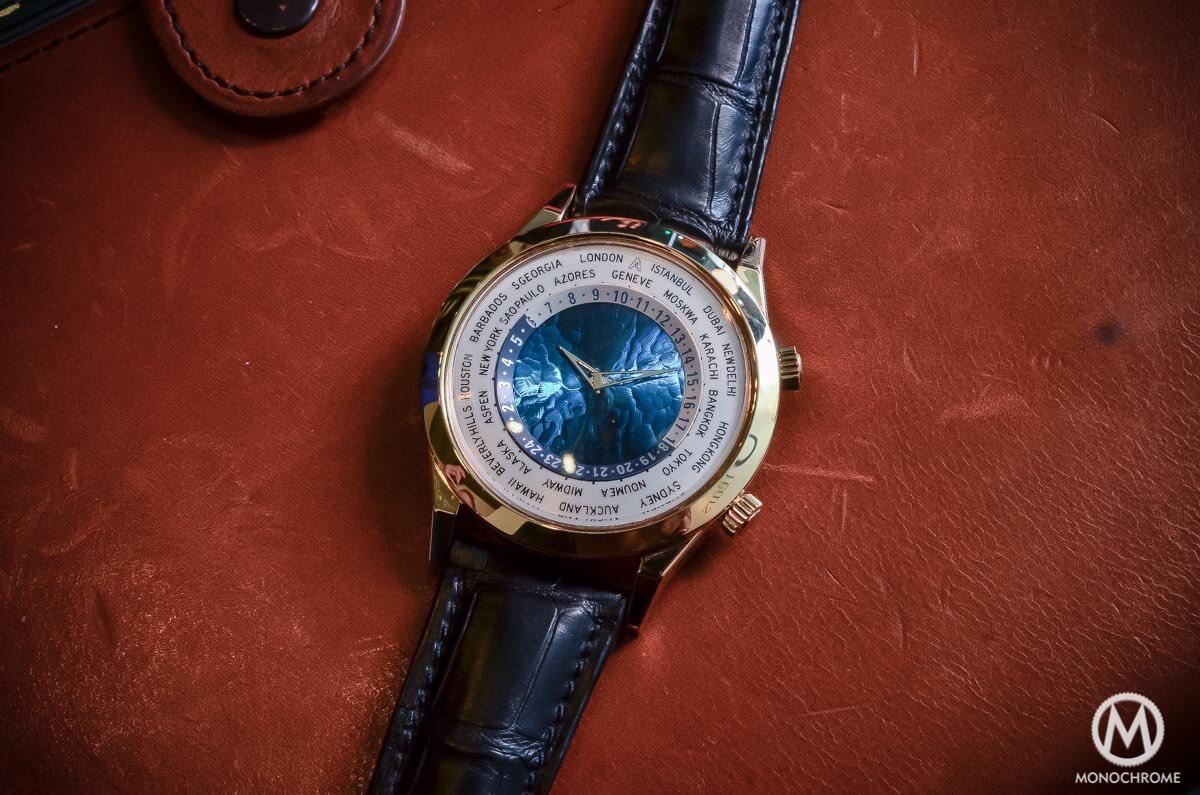 There a few watches that are as practical as a world timer, a watch able to give you in a single look at the dial the time of all the main cities around the world (and your local time too). In a world of growing globalization, these timepieces are now seen as extremely useful – but this was not the case when invented. This complication is credited to the famous watchmaker Louis Cottier with the highly collectible Patek Philippe Ref. 2523, a beauty that Andersen Geneva commemorates with its latest special edition, the Tempus Terrae. 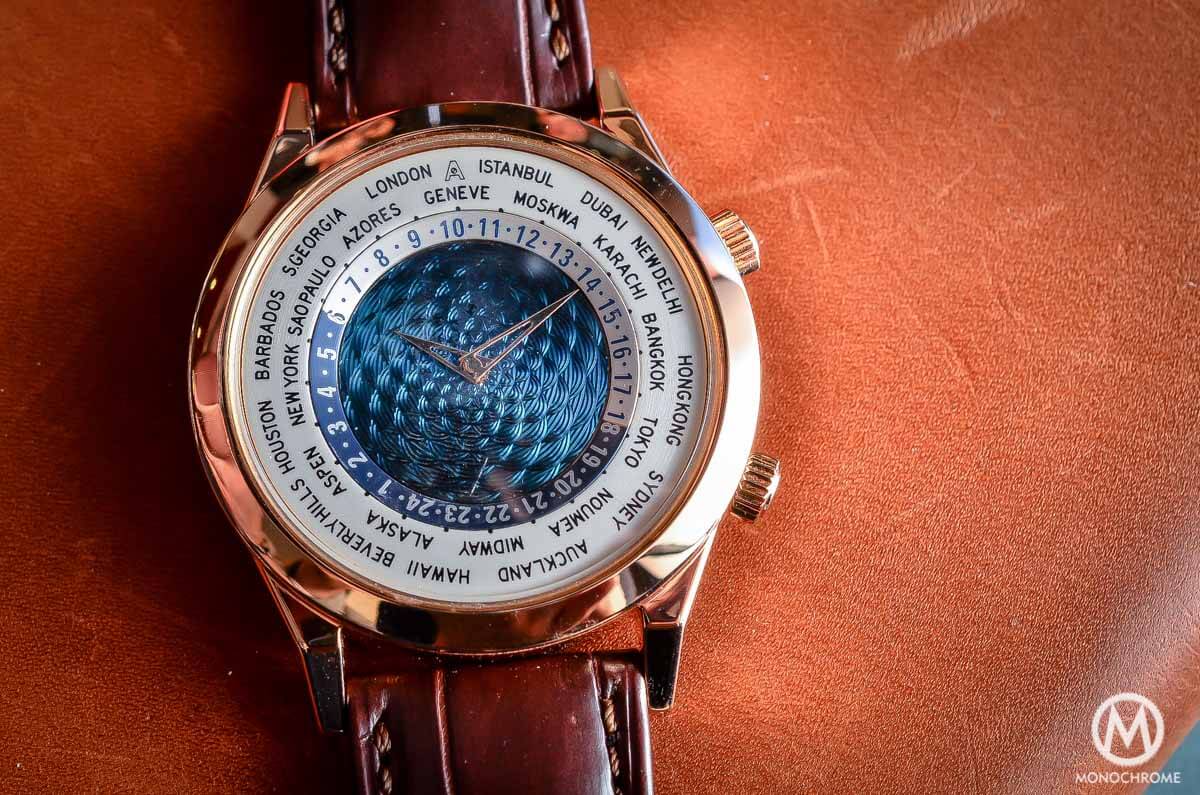 Let’s be very clear with you, the Andersen Geneve Tempus Terrae is a sumptuous piece of horology. When we first saw it during Baselworld 2015, we just felt in love with this watch – and especially our editor-in-chief Frank, known to have a thing for World-Timer watches. The beauty of the Andersen Geneve Tempus Terrae comes from its unique shape, its engine-turned dial and its complication. If you’re into vintage watches and rare birds, the Tempus Terrae might sound familiar to you – and you’d be right to feel like a ‘deja-vu‘. In fact, with this timepiece, Andersen Geneve (that is known for his own world timers) commemorates the first World Time watch with two crowns developed by Louis Cottier in the 1950s – to be precise, the Patek Philippe Ref. 2523 – and what a tribute they created.

The story behind Andersen Geneve

Svend Andersen – member of the AHCI (Académie Horlogère des Créateurs Indépendants) since 1985 – launched his own workshop in the late 70’s after having spent 9 years at Patek Philippe in their Atelier des Grandes Complications. He started his career as independent watchmaker by first manufacturing cases for collectors. He then consented by creating bespoke timepieces (called ‘pièce unique‘). Since then, Andersen Geneve has been developing complicated watches like annual calendars, perpetual calendars, jumping hour calendars. His masterpiece was the secular perpetual calendar, a watch that accommodates a quirk of the Gregorian Calendar: the years 2100, 2200 and 2300 are not leap years. In these years regular perpetual calendars require a manual correction, i.e. it doesn’t need an extra day in February. The complication developed by Andersen Geneve will show the date without adjustment every year up to and beyond 2400.

While working at Patek Philippe in the early 1970s Svend Andersen had the chance to work on the world time complication developed by the Geneva-based watchmaker Louis Cottier. In commemoration to Louis Cottier’s first worldtime wristwatch, Andersen Geneve designed its first World Time watch in 1989. It was a great success and the watches were delivered to watch collectors in 1990. Since then Andersen Geneve has been developing different series of World Time watches.

Back in the late 1930s, Louis Cottier, a famous watchmaker, developed an unseen complication able to display the exact time of the main cities all around the world in a single dial: the world timer. It was first seen in 1937 on a (possibly) unique piece by Patek Philippe, the ref. 515, a rectangular watch (photo here). Back then, this watch and the very few editions that follow were fitted with only one crown, that both adjust the local time (in the center part of the dial) and the 24-hour ring. The common point of these early world timer watches are the cities printed on a fixed ring or directly engraved on a large bezel, outside the dial – the ring featuring the different time zones cannot be repositioned by the wearer. 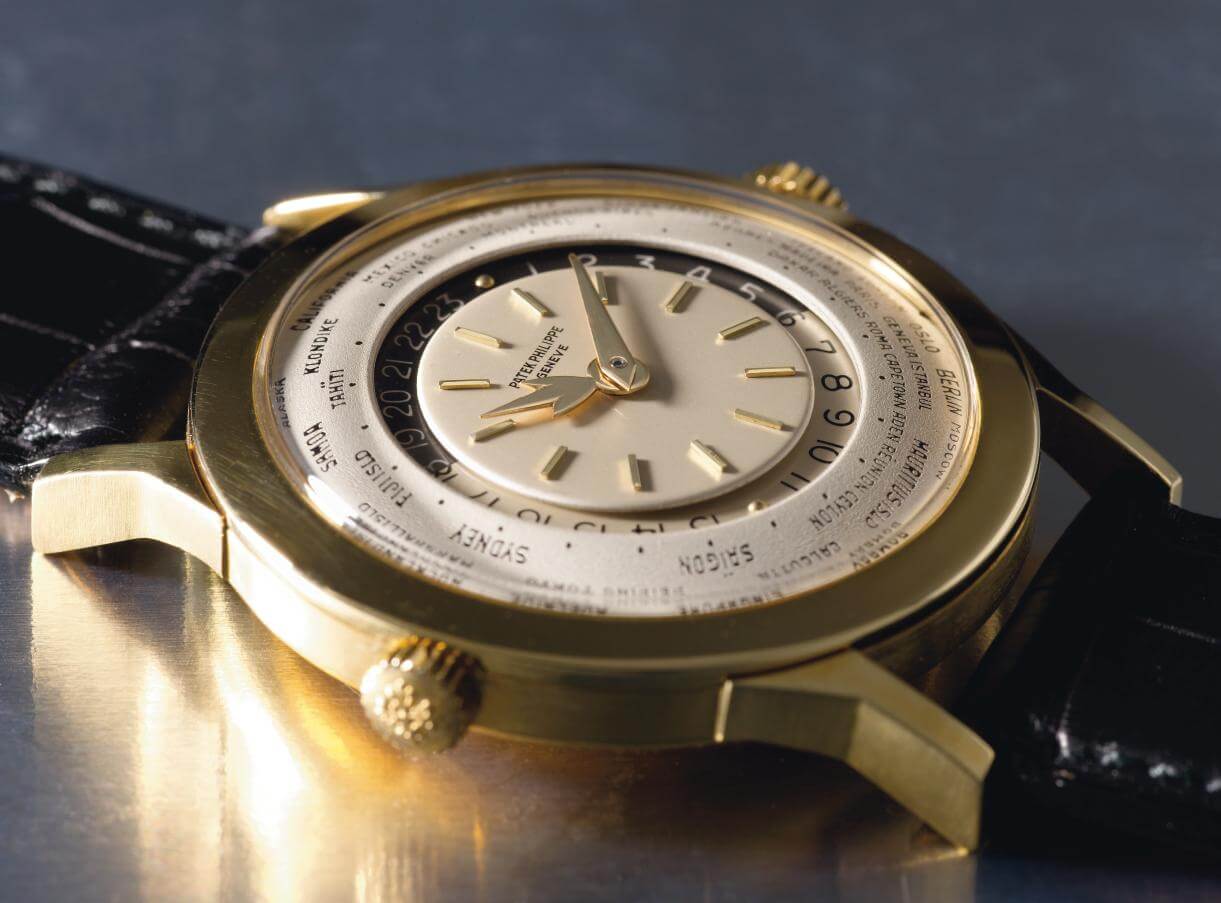 This leads to the last generation of the world timers developed by Cottier for Patek Philippe, the famous reference 2523 with two crowns introduced in 1953, a watch that is now seen as the most mature and developed one since it allows the wearer to change the location by turning a separated crown. This 35.5mm watch had a special and unique feature: two crowns located on both sides of the watch – one (at 3) to set the time and the hour disc and the second one (at 9) to set the city-ring. The watches were fitted with a variety of different types of dial centres, including engine-turned gold, cloisonné enamelled discs depicting maps or monochrome translucent blue (like the one sold recently by Chritie’s at the Patek 175th auction and that reached CHF 2,225,000). 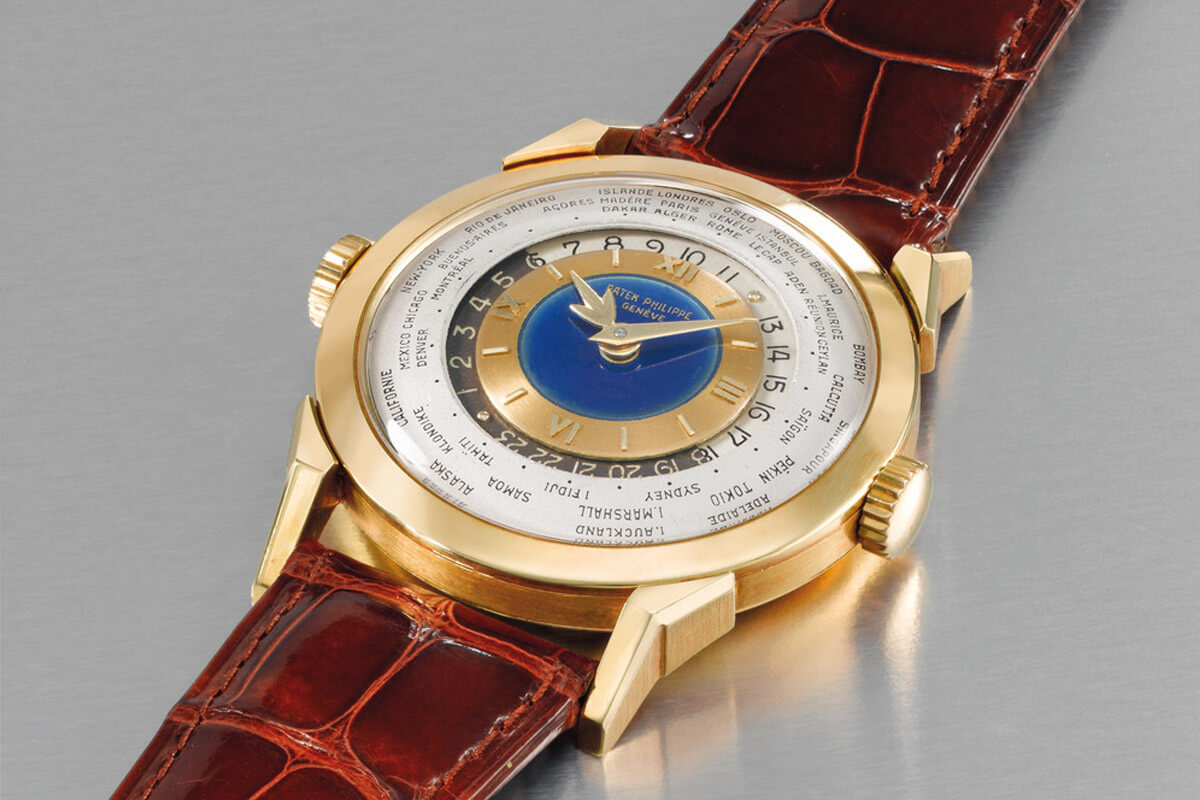 Another example of the Patek Philippe Ref. 2523 with blue enamel dial – credits: Christie’s

When you look at this Patek / Cottier Ref. 2523, the most attractive part are certainly the lugs, with their faceted shape. They are a true masterpiece of design, with 3 facets: top, side and a third one inclined at 45 degrees – plus a nice polished bevelled angle on the external side. Those sharp lugs may be superb, they were odd in the 1950s context, where most of the watches were coming with roundish lugs and cases. This point is not the only one that is now extremely attractive – the dials, the crowns, the rarity (production is estimated at 7 to 10 pieces) are explaining its recent success. However, this was not the case during the 1950s, as this watch was properly seen as an odd duck. For Christie’s, the Ref. 2523 was ‘considered an odd contraption at the time, the world timer was a strange bird and people didn’t know what to make of it. The small painted city disk representing 24 time zones was just too small and hard to read. Plus, there was a strange crown at 9 o’clock to adjust to times in different cities.‘ It’s interesting to see how a watch that failed to be a success – and with such a low production level – can now be regarded as an icon, a holy grail for collectors that broke several times the 2 millions barrier.

Note: Louis Cottier not only worked on the world timer complication with Patek Philippe. He also created a prototype of a mechanical watch with digital display called Cobra. This never-produced-watch was the inspiration for the URWERK UR-CC1 King Cobra – a story that we explained here. 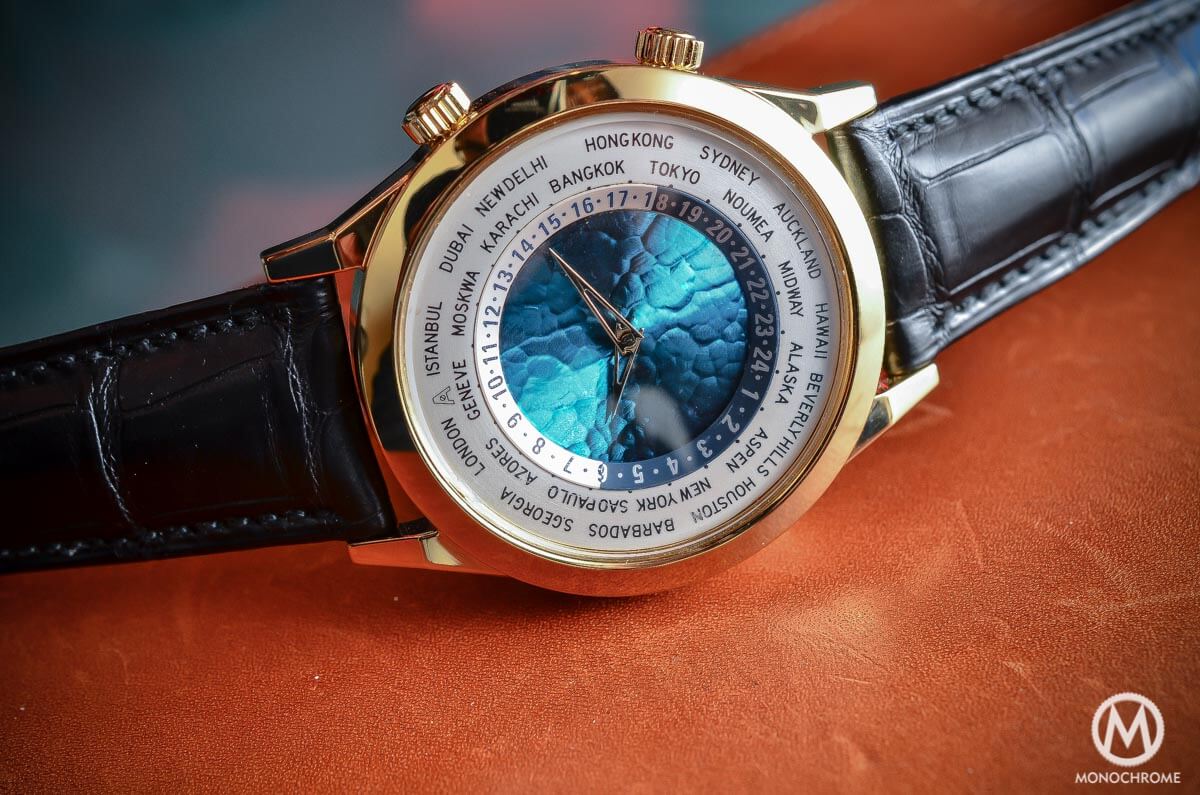 As a former employee of Patek Philippe and a master of the world timer complication, we’re not surprised to see Andersen Geneve paying tribute to the work of Louis Cottier and to the Patek Philippe Ref. 2523. The timepiece they produced is neither a simple reissue nor a copy. It’s clearly a watch to commemorate the spirit of the first world-timers, a watch that is inspired by its elders. We found here a more modern approach in the finishings, the materials used, the colors or the movement. However, the overall feeling is fully respected. 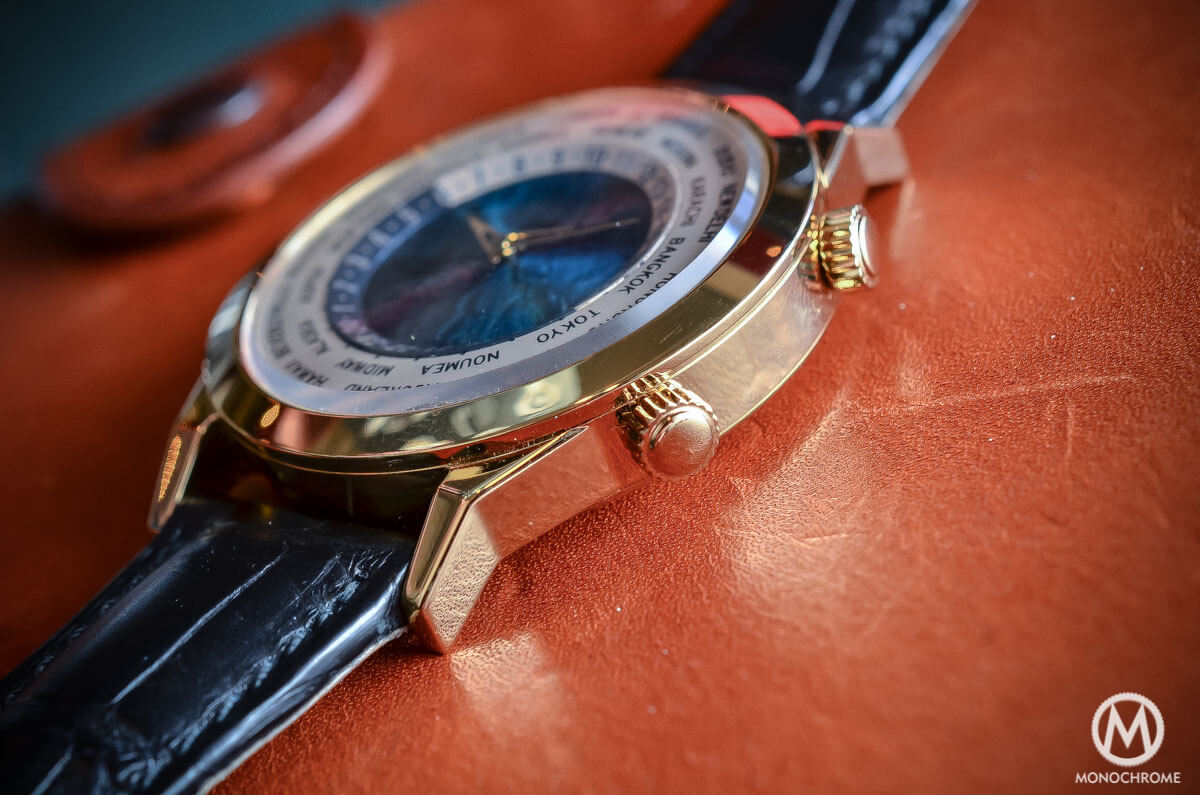 Let’s first take a look at the case. It measures 39mm x 9mm and is available in 18k yellow gold, 18k red gold or 18k white gold. It is clearly a small and slim watch – especially considering the world-timer complication. That said, the Andersen Geneve Tempus Terrae is resolutely inspired by the Ref. 2523, with a rather large and flat bezel and flat casebands. The main point of resemblance are the lugs, that are using the same faceted shape that gave so much appeal to the vintage Patek. As huge fans of this vintage beauty, we can tell you that finding back those lugs in a modern piece is a real pleasure, both for our eyes and for what they represent – sometimes a small detail can make a huge difference. The finish is different though as the Andersen Geneve Tempus Terrae is fully mirror-polished while the 2523 was alternating with polished and brushed surfaces. However, this doesn’t change anything to the overall quality of the execution. 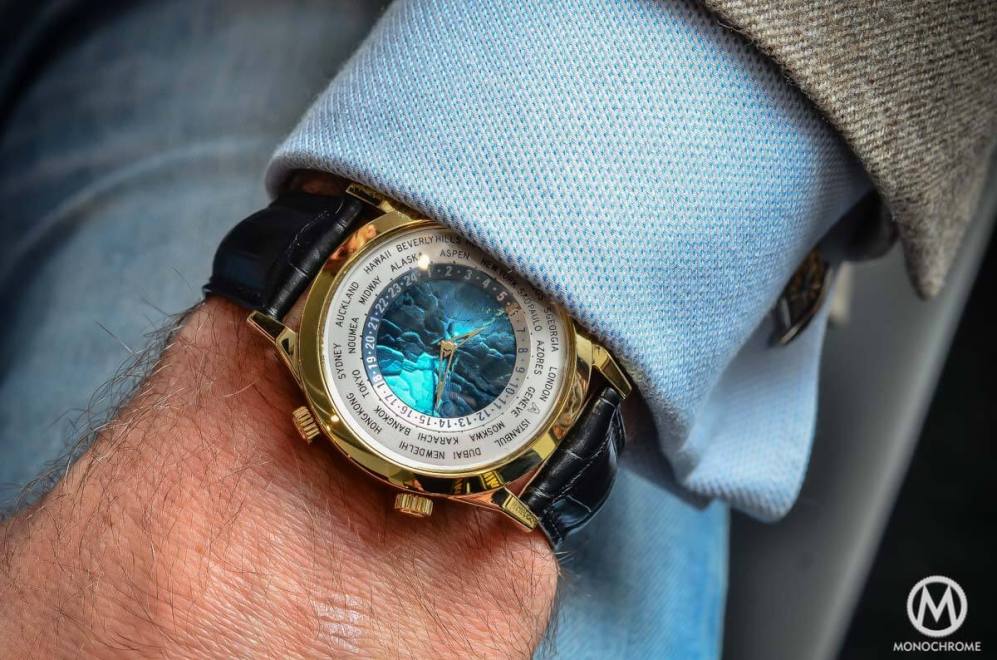 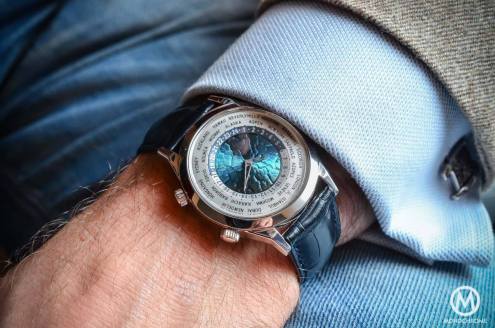 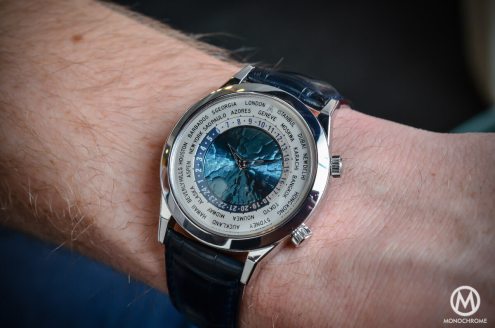 We found back the twin-crowns. However, on the Andersen Geneve Tempus Terrae, they are both located on the right side of the case. One of the crowns is used to set the time, to set the 24-hour disc and to wind the movement and the other one is used to set the city-disc independently. Thus, you can easily read your local time with the hands – on the central part of the dial – and read the time in all the major cities around the world on the World Time zone scale, thanks to the rotating ring displaying 24 hours’ time zones with day/night coloration in dark blue and silvery white. 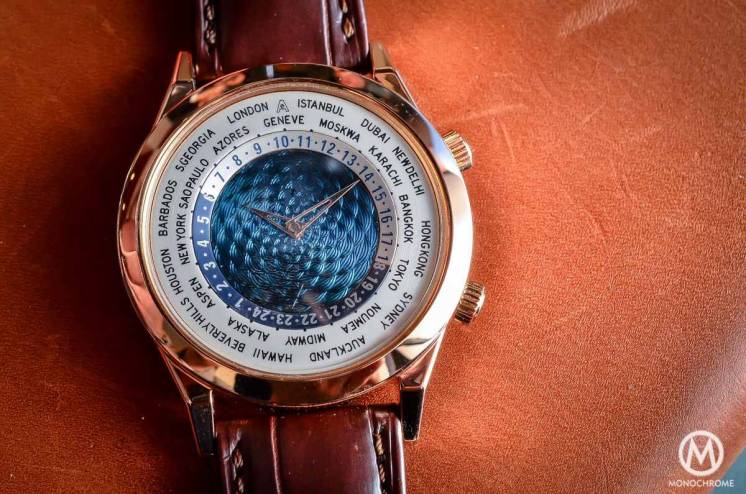 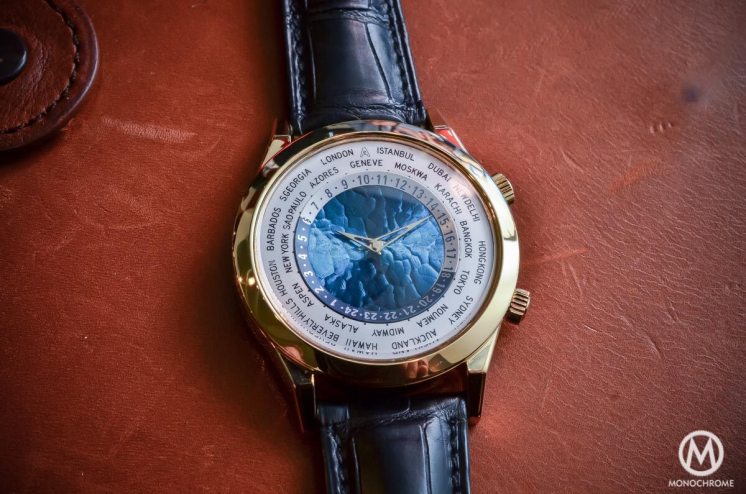 Moving to the dial, we can see the classical layout of a world timer. The rather short hands are made of gold and shaped like an A – the logo of Andersen Geneve. The central part of the dial is made of blue gold and then hand-guilloché (engine-turned) – two patterns are available, tapisserie or scale. Blue gold is a proprietary material made by the brand. It is a 21ct gold base with iron elements added in the casting. Once heated it turns to a (superb, bright and deep) blue colour depending on the duration of the heating; every BlueGold dial is thus having its unique colour. This material is also used for the rotor. 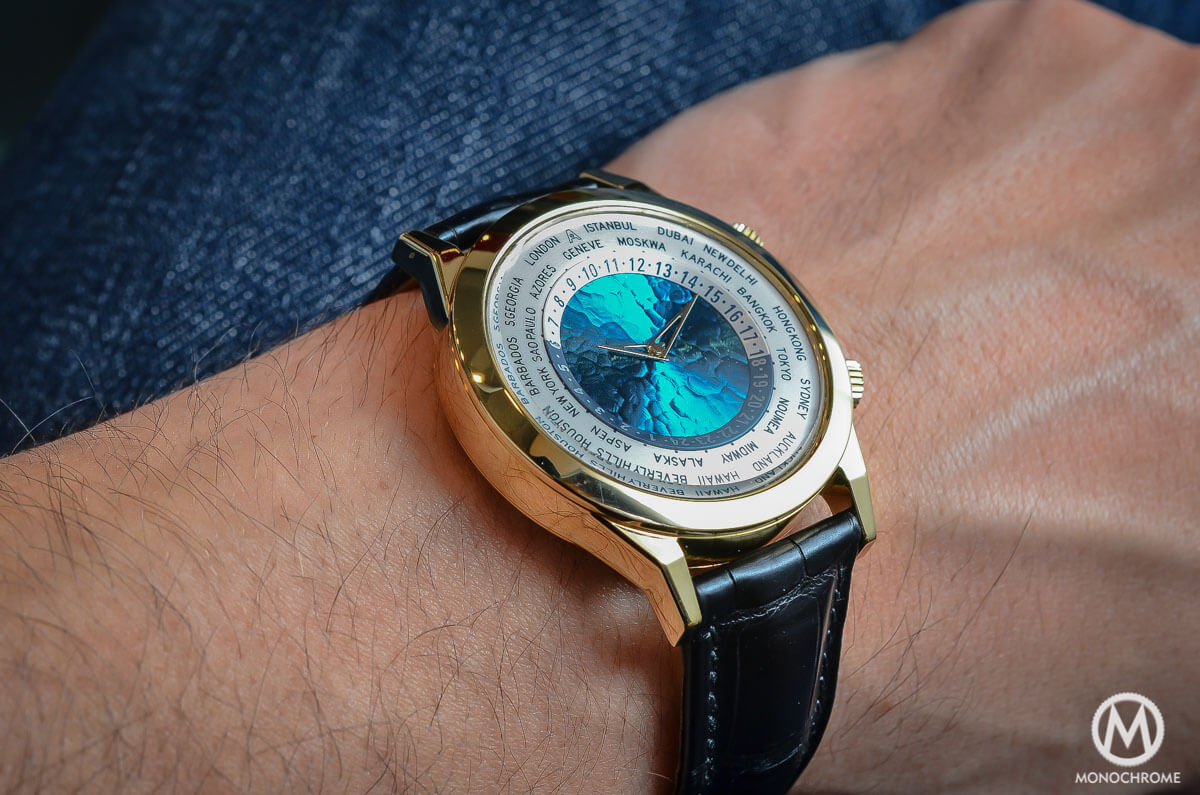 We have not seen the movement during our hands-on time with the Andersen Geneve Tempus Terrae, as the watches photographed here are still prototypes. It is said to be a high quality automatic Vaucher movement (that is for sure a very nice and reliable movement) upgraded by Andersen Geneve with time zones complication module developed in the atelier. Every component of this watch is produced in Switzerland, whether in Geneva or Neuchâtel Canton.

Personalization is possible on the Andersen Geneve Tempus Terrae, as you can add a special city name or choosing a special text colour on the “city ring” of the dial or you can choose a special colour for the numbers on the 24-hour ring of the dial. Of course a text can be engraved on the plain caseback. The Andersen Geneve Tempus Terrae is a limited edition of 75 pieces (25 pieces in 18k yellow gold, 25 pieces in 18k white gold and 25 pieces in 18k red gold). It will be delivered end of summer 2015 (pre-orders are now opened) against CHF 29.700 (approx. USD 31.000) in yellow gold or CHF 32.200 (approx. USD 33.700) in red gold or white gold – equivalent watches from Patek Philippe (ref. 5130) or Vacheron-Constantin (Patrimony Traditionnelle World Time) are priced over CHF 40.000. 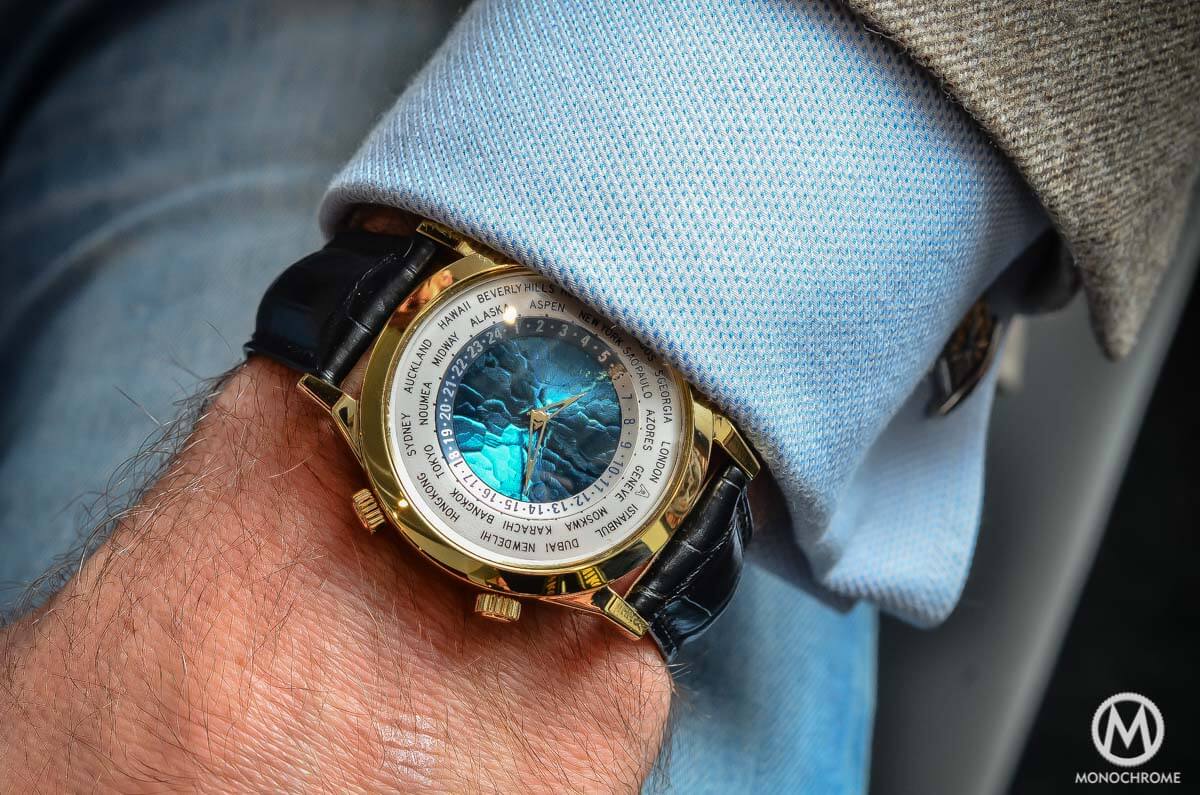 That said, we definitely had a proper crush on this watch. All the elements of a superb watch are reunited: a stunning execution (quality of the case, precision of the printings and of the guilloché patterns), a elegant and inspired shape and a useful complication. Of course, some will argue that it’s just a copy of a vintage watch but we will disagree with them. It’s a tribute, executed by a man that mastered this complication, that worked for the manufacture he took inspiration from (i.e. Patek Philippe) and that brings its own touch with a both modern and classical execution. Bravo!

If you feel as much interest as us in this superb piece of independent watchmaking, you can contact Christian Bissener from Watch Collector – www.watchcollector.lu or info@watchcollector.lu – for pre-orders.