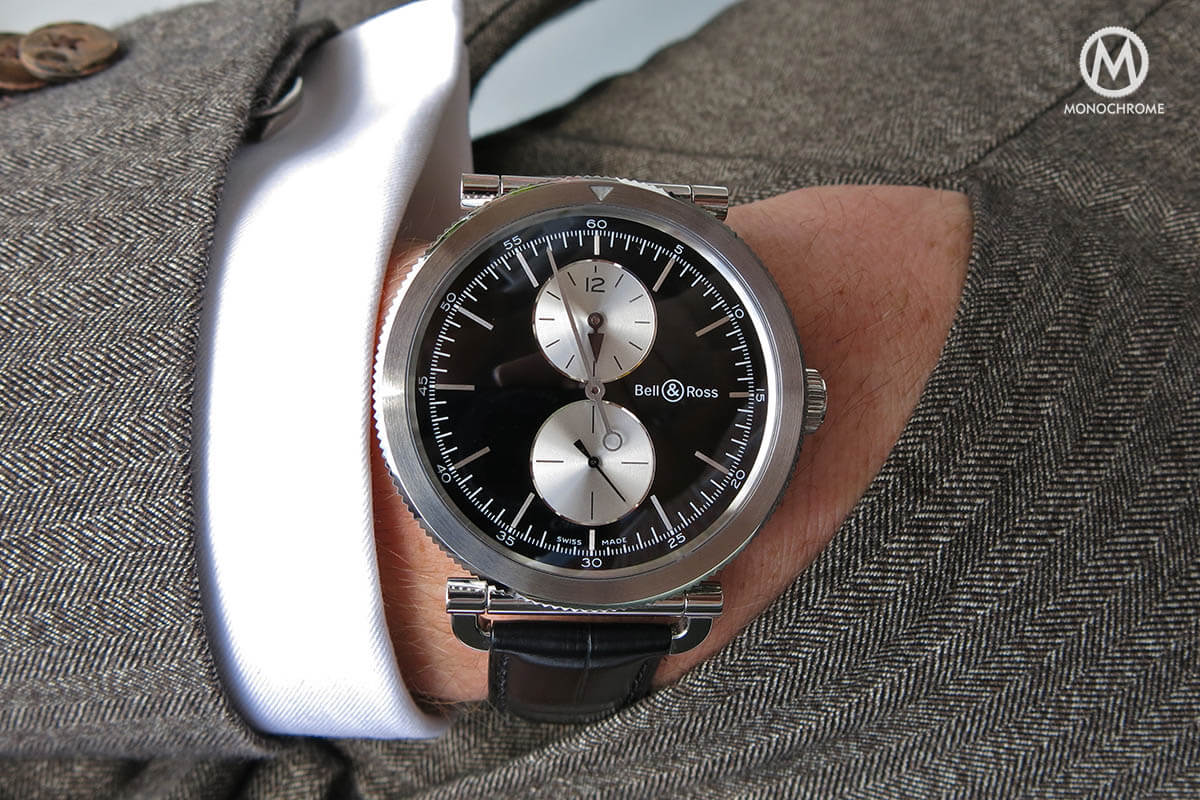 Bell & Ross introduced the WW2 collection a couple of years back with their military inspired WW2 Regulateur, known at that time as the Regulateur Bomber. They’ve dropped that name, for quite obvious reasons I can imagine, now they bring a new edition that is a little more sophisticated than the original: the Bell & Ross WW2 Regulateur Officer. Here is the full review after several weeks on the wrist.

The first Bell & Ross WW2 Regulateur, introduced during Baselworld 2012, was inspired by an old bomb-timer that pilots used to have strapped to their leg. This timing instrument was used to time the release of a bomb as exact as possible to obtain their objectives and destroy their designated targets (these watches are a specific kind of navigation tools. You can read our in-depth history of pilot watches here: part 1 – part 2 – part 3 – part 4 – part 5). No high-tech GPS wizardry or computer guided smart-bombs were available yet so the pilots had to rely on their own basic instruments, intuition and timing, and natural landmarks. The bomb timers were one of the instruments developed to time the specific drop of a bomb, or a distance from point A to point B. One of the essential features is a stopwatch like functionality and a large rotatable bezel with large notches or a rough enough knurling to be used with thick leather gloves. 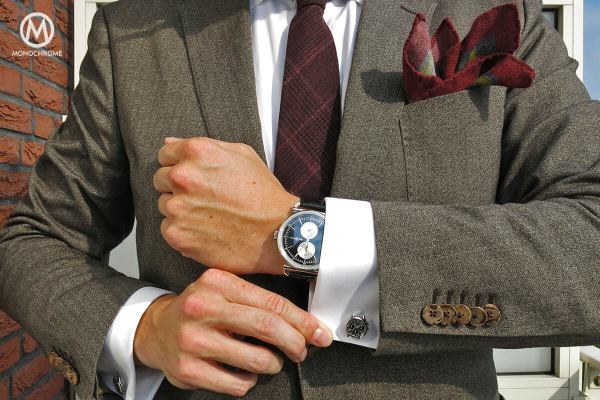 The Bell & Ross WW2 Regulateur Officer is a large watch, but still sophisticated in more ways than one. There is a certain elegance about it that you might not expect when solely relying on specs. 47mm wide excluding the crown is large, don’t get me wrong – especially considering it is said to be vintage. Do bear in mind though: this is not a vintage watch in terms of size but a vintage watch in terms of execution and heritage. It has a utilitarian origin and thus a utilitarian size. Compare it to the IWC Big Pilot series if you will – still vintage (inspired), but far from small at 46mm. 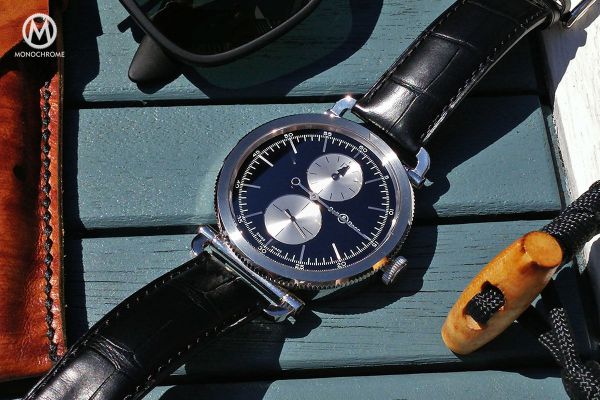 Despite its size, it still sits snug on the wrist, due to the design of the flexible lugs. Match this with the panda-like dial (bright subdials on a black dial) and you get something quite attractive and wearable. It would definitly look out-of-place in the field of combat but it isn’t called the officer for nothing. This is the more elegant brother of the field-Regulator released in 2012. But, being a regulator is it easy to get used to its uncommon display of time?

A regulator splits the indications of time into separate hands and (sub) dials. Back in the day, the minute counter was the most important indication for timing. You always have a somewhat vague feel as to what hour of the day it is, so this is less important than the minutes. That being said, a regulator displays the minutes through a large, centrally mounted hand and displays the hours and seconds on independent sub-dials. 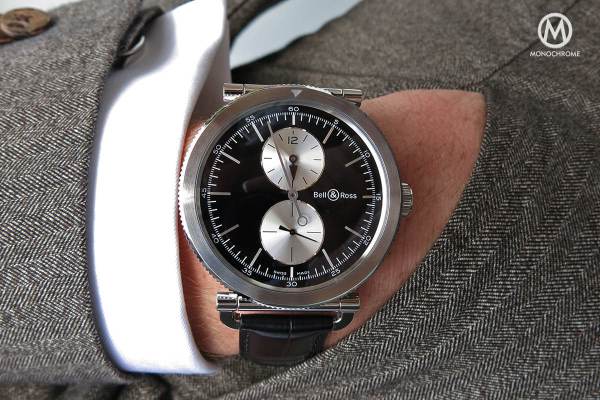 The Bell & Ross WW2 Regulateur Officer also shares a distinct feature of antique bomb timing instruments, a bi-directional bezel. Not to reveal too much at this point – the reason of this type of bezel is explained in a bit – but it does add a level of usability to an otherwise time-only watch.

A regulator takes time to get used to, there is no doubt about that. It isn’t your typical time indication with centrally mounted minute and hour hand. One of the key elements that really helps the wearer to read the time at a single glance is a very simple one: legibility! If a dial is too cluttered, breaking up the indication in three different registers isn’t the way to do it. During my time with the Officer, I found the contrast between parts of the dial, markers and hands to be very clear. 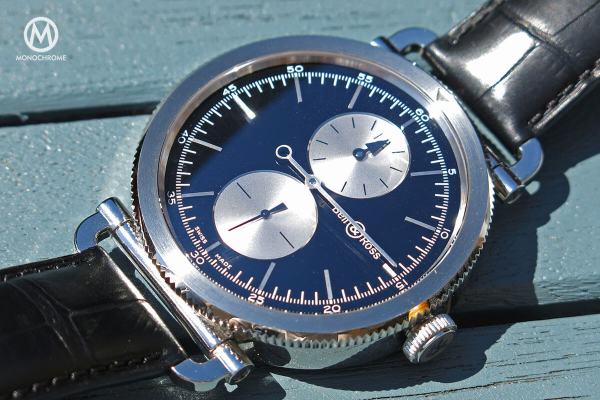 A black lacquered dial, with white and silver markings and silver subdials provides more than enough contrast on the Officer. The long, silver minute hand fully extends to the inside edge of the minute track, and can be clearly seen against the black background. Only in circumstances with very little light (not at night, just dimmed situations) makes it a bit tricky to distinguish. The minute track is divided into 5 minute segments indicated with a large marker and a digit totaling to 60 on a full rotation. In between are smaller markers for each separate minute, with the smallest markers of the track indicating quarters of a minute. 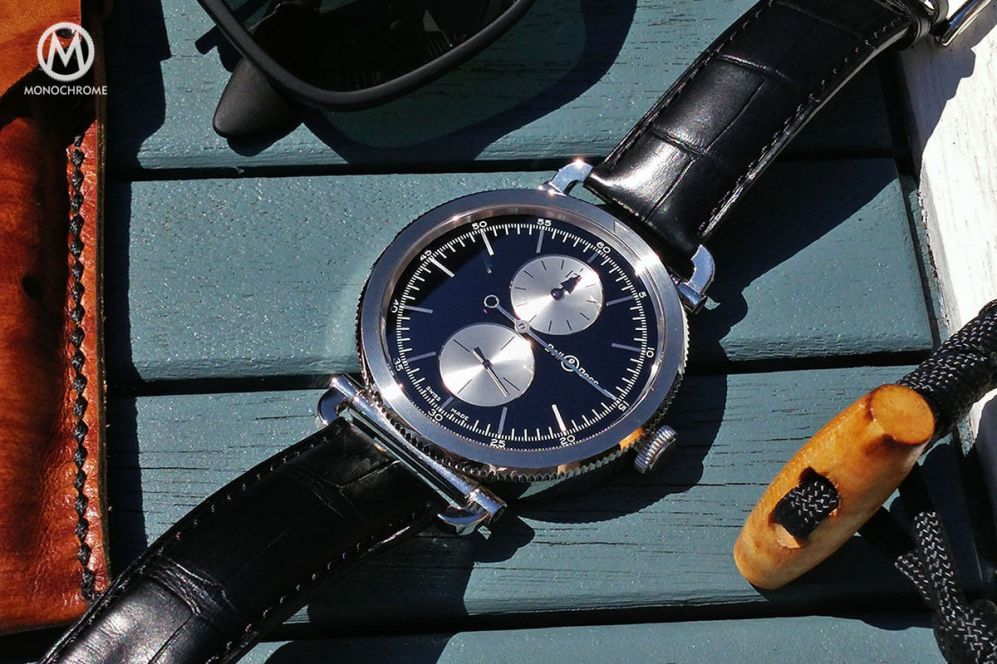 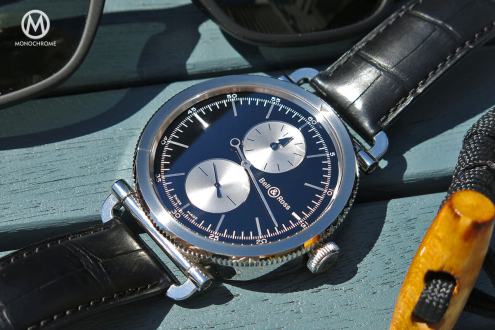 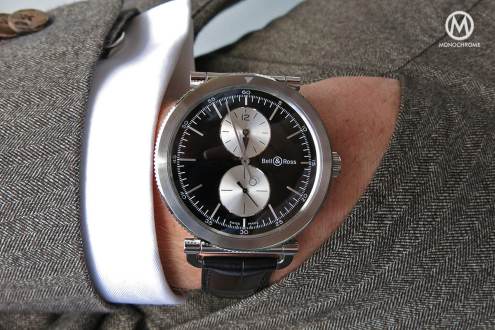 The sub-dials for the hours at 12 and seconds at 6 (flipped upside down if compared to the Regulateur Heritage) are done in silver with a slight circular graining. The small hand for the hours is done in deep black and arrow-style standing out perfectly over the silver background. Same goes for the straight second’s hand, with a small arrow-like counterweight. It is a matter of flipping the contrast from silver-on-black to black-on-silver that really makes it legible. The Bell & Ross logo is printed at 3 o’clock as with most creations from the Parisian brand. At the bottom, you can find the final print that completes the dial: Swiss Made.

The 47mm wide steel case is well proportioned, polished to a nice mirror like finish and feels very sturdy. Despite the large diameter of the watch, the relative slim height makes it very wearable, even with a business suit. Where the WW2 Heritage Regulateur is too rugged in looks to be matched with a suit, the Officer manages to just pull it off. As mentioned before, the wearing comfort is enhanced by the flexible lugs. On smaller wrists they will angle (almost) straight down and effectively shorten the lug-to-lug size enough to maintain a good level of comfort. On larger wrists they will act like normal lugs, curving along the circumference of the wrist. 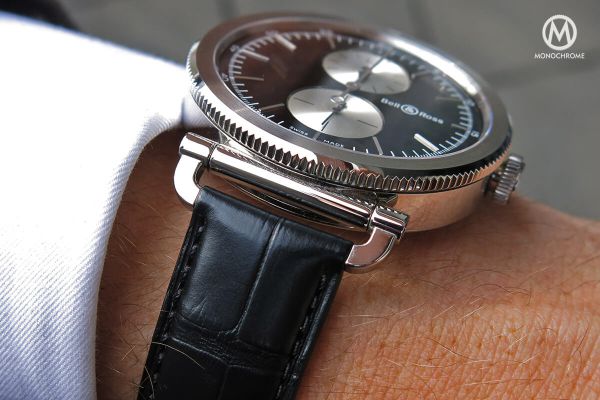 The bi-directional bezel is not intended to be used as a diver’s bezel like you might think. Water resistance is only 50 meters so I wouldn’t take it anywhere wetter than the occasional light shower of rain. The bezel, adorned with only a triangular engraving is intended to be used as a timing aid instead, allowing you to pinpoint the start of your “mission” and measure the elapsed time it takes you to complete the objective. Sure there are more precise devices conceivable to do this (smartphone, on-board computer of your car, various health-gear devices etc.) but there is something romantic about relying on a mechanical wristwatch. Seeing the seconds tick one by one is oddly satisfying as your goal creeps ever closer!

Rotating the bezel is easy, it grips well and has an acceptable degree of heft needed to turn. Not too much, but it doesn’t slip one bit when tucked under a shirt or brushed on the edge of a pocket in your pants or jacket. The clicks are sturdy but very smooth, it doesn’t feel and sound like you are running metal over metal, unlike some other rotatable bezel I’ve encountered. Operation of the crown is equally smooth and has only one setting, in order to adjust time. The enclosed caseback features a knurled edge for a caseback opener, a bit reminiscent of a Rolex caseback. 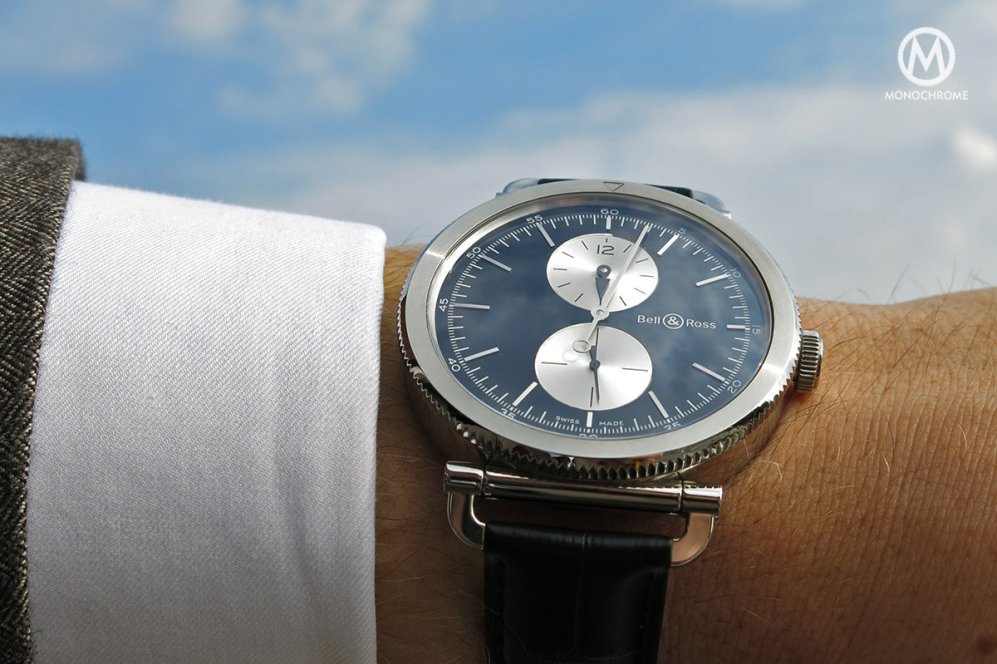 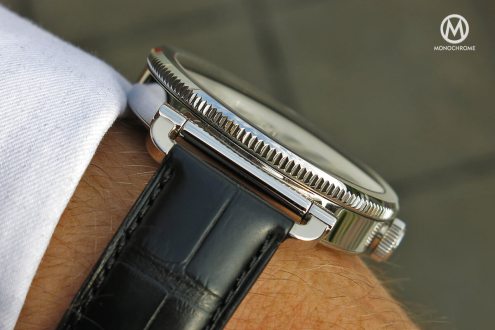 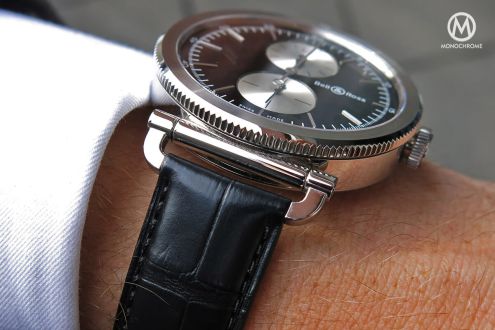 The Bell & Ross WW2 Regulateur Officer comes on a black alligator strap with a contrasting brown lining (Very comfy to the touch!) and a normal pin and buckle. The sturdy buckle is decorated with the Bell & Ross logo with a little indentation to nestle the pin neatly in place.

A regulator movement separates the indication for hours, minutes and seconds into three single displays on the dial. The Calibre BR-CAL316 inside the Bell & Ross WW2 Regulateur Officer is done by Dubois-Dépraz which is a bit of a welcome change to the normally adapted ETA movements in most of the Bell & Ross collection. There is nothing wrong with a relatively simple ETA but having a more high-end movement inside feels like a step up. This automatic Dubois-Dépraz Index-Adjuster (as it is known) boasts 42 hours of power and measures 30mm in diameter and 5.2mm in thickness. This is just for the movement alone, and you can imagine this calls for a pretty sizeable movement ring considering the 47mm case it needs to fill – and thus, the solid caseback is more than welcome. 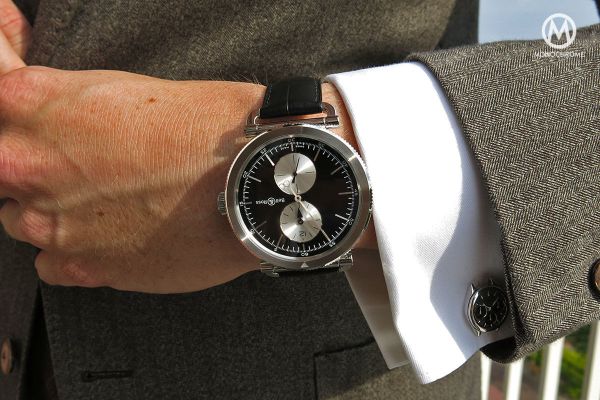 The usability of a regulator is always somewhat questionable. It is all up to the ease of reading the time and that part is still relatively intuitive. That being said, I can very well imagine that a regulator is not up every ones alley. It takes time to get used it, it is a bit outdated perhaps, and some people do not like it at all. But, as I keep reminding myself and others, that is the beauty of this business. Time and time again I end up in a discussion with someone and time and time again the result is as followed: I do (not) like it but I do (not) see the up- and downsides to it (Strike-through whichever is obsolete). 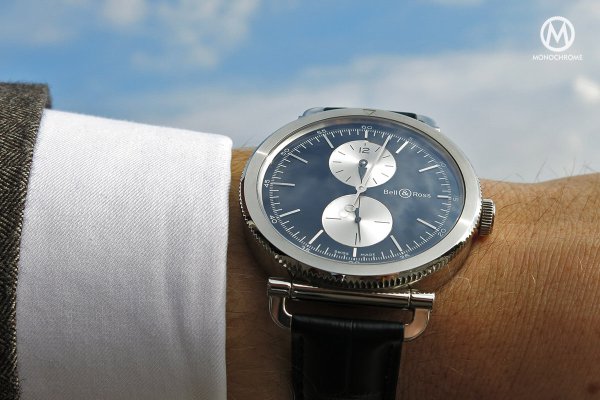 The Bell & Ross WW2 Regulateur Officer is a well-built watch, with a very good feel of quality. The lugs are well executed and articulate smoothly on any wrist. The bezel is smooth as butter but still has the necessary resistance in it to not feel flimsy. The legibility of the watch is up to par to what’s expected and quite honestly needed with this style of watches.

It is non-limited, and available at a price of 4.900 Euros For more information: Bell&Ross.com.