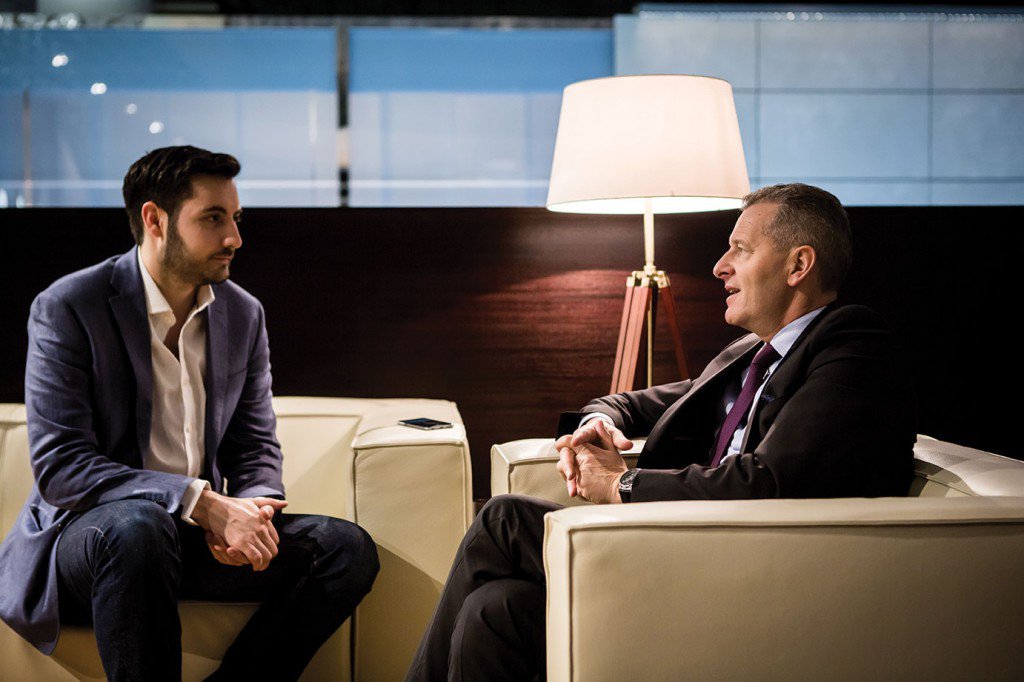 There is no such thing as a dull Baselworld, but even the world’s largest watch fair can reserve a standout year. That was certainly the case this year at the Ulysse Nardin booth, where the luxury Swiss brand unveiled a 2015 collection that boasted not one, but two exceptional innovations, including the surprise return of the much- loved Freak. If collectors were curious to find out how Ulysse Nardin would look after its acquisition in November 2014 by Kering, they would soon find out that the future of the brand was in very good hands. Two days into the watch fair, we sat down with Patrik Hoffmann, CEO of Ulysse Nardin, to find out how this Baselworld compared to previous fairs; how he was adjusting to the new ownership; and why 2015 marks a turning point in the brand’s history, but not in its DNA.

Only a couple of days into Baselworld, can you tell already if this is a special year for the brand?
This Baselworld is not much different from previous years. We are focused on continuing on the current path, and pursue innovation. But this is indeed a standout year for us. We presented two really revolutionary innovations, and keeping it up on this level for the next year will be our challenge. It is a rare achievement to do so. Our first innovation is the Ulysse Nardin anchor escapement, which is of course based on silicium. We had the chance last year to show the escapement already in the form of a prototype, but we have worked on it some more. It’s placed onto a constant Ulysse Nardin Tourbillon, and what is even more exciting is that we will be able to use it in future timepieces. It doesn’t have to be in the shape of a tourbillon; it can be a traditional escapement. The second one, and equally as important— if not, more so—is the new Freak with a date complication. The date is one thing, but what is also important is that we have [integrated] a shock absorber in silicium [into the piece]. The Freak is a model that gets a lot of attention from collectors, not only because of its functionality today, but also because of its potential for future innovations. The Freak is a laboratory on the wrist; hence the name of the latest model, “the Freaklab.” The challenge this year was: How do we add a date, without adding a pusher, crown, or pushpin? Our technicians themselves initially said they needed a crown to change the date, and said it couldn’t be done otherwise. But the Freak was designed not to have a crown. It required skills and imagination to reach the goal. 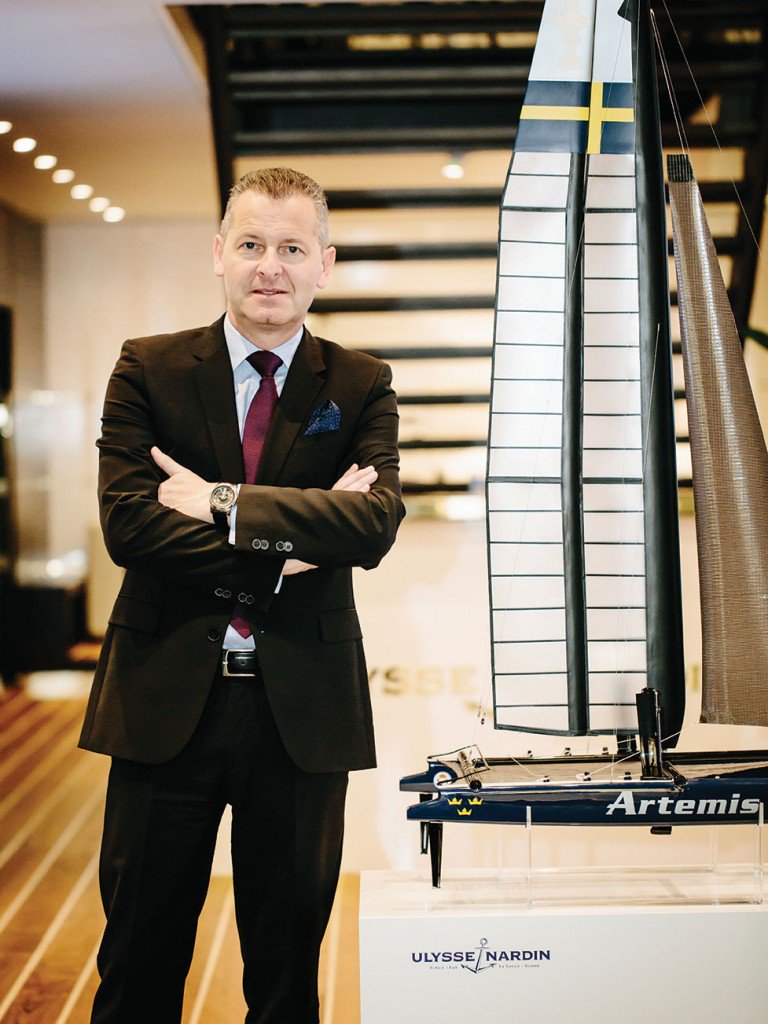 Why then add a date? Was it something you had in mind when you designed the first Freak? Or something that collectors mentioned would be a nice addition?
It came up more on our side. Pierre Gygax [COO of Ulysse Nardin] and I wear the Freak quite often, and look at the piece at least 10 times a day. And we found that we were always searching for the date. So of course, we wondered if we could add one.

Ulysse Nardin is also celebrating a new partnership with another team that chases innovation, and competes to be the best in its field. We are, of course, talking about Team Artemis Racing, the Swedish Challenge for the 35th America’s Cup.
The door for a partnership opened when Ulysse Nardin was acquired by Kering. It was their relationship, and for everybody it was clear: the DNA was there, the marine element was there; it was a perfect match. Most importantly, after meeting the Artemis team and their technicians, I realized it was much more than a pairing of values. It was about technology, about pushing the boundaries of what is currently possible to find out what will be possible.

Speaking of which, is Kering asking for changes at Ulysse Nardin?
Of course! There must be changes. I think evolution is good for the brand. There is no break in our DNA however, none in the product, none in the history. The core pillars remain. Probably the biggest difference was for me. As the CEO, my job description has changed, and in a good way. I am very happy with this partnership, and as you know the management of Ulysse Nardin was involved from A to Z in this deal, and I am convinced it was the right partner for the brand.

Will your position evolve internally or externally?
It has to be external, because that is really what counts. But there are important internal changes, such as the integration of the Italian office into      Ulysse Nardin is also celebrating a new partnership with another team that chases innovation, and competes to be the best in its field. We are, of course, talking about Team Artemis Racing, the Swedish Challenge for the 35th America’s Cup. The door for a partnership opened when Ulysse Nardin was acquired by Kering. It was their relationship, and for everybody it was clear: the DNA was there, the marine element was there; it was a perfect match. Most importantly, after meeting the Artemis team and their technicians, I realized it was much more than a pairing of values. It was about technology, about pushing the boundaries of what is currently possible to find out what will be possible. Girard-Perregaux’s office. And right now we are integrating the Girard-Perregaux operation in New Jersey into our operation in Florida. There is no harm in mixing synergies in accounting, administration and after-sales services, as long as we keep sales and marketing teams separate.

You mention mixing. A couple of the brand’s 2015 novelties seem to be fusing elements thought not to match, such as the Perpetual Calendar with a diamond-set rubber bezel.
Our brand has a reputation for being edgy when it wants, not always. I would consider us very conservative in many ways, but we can venture out once in a while. The Freak is a good example. Giving that name to a watch that is priced above $ 100,000 is… freaky! I think we are a bit unique in that sense. And we will continue to be. And the new Perpetual Calendar is one of those pieces where we’ve ventured out of tradition. It’s not the new face of the brand, but it’s a cool addition to the family.

Another watch that is based in history and tradition is the Répétition Minutes Hannibal Westminster Carillon Tourbillon Jaquemarts.
Of course! Chiming watches are part of the tradition and craftsmanship of Ulysse Nardin. And we had tremendous success with the Genghis Khan minute repeater when it came out [in 2002]. That was followed with the Alexander the Great minute repeater. So we decided to stay with those conquerors, and naturally turned to Hannibal. I think the beauty of this particular model [revolves around] its dial, which is made out of granite, and sums up the history of [the man who] conquered the mountains. Because he did so with elephants, which creates a great visual scene, it was the easiest model in terms of imagining a beautiful scene.

Is Ulysse Nardin always moving, conquering territories, voyaging the seas, and traveling through time?
No, I truly believe Ulysse Nardin is one of few watch brands that is anchored in its history. Artemis is a vehicle of course. It is a racing boat, and a marketing vehicle for Ulysse Nardin. But is was not built by a marketing team. The Hannibal, the Genghis Khan, and the Alexander the Great are modern marvels. But Ulysse Nardin has built minute repeaters for hundreds of years, so it is not new to us and reflects the relevance of our history. Everything we do, we’ve done it for years. And our history is our greatest platform. And because it involved innovation, we will always be innovating.