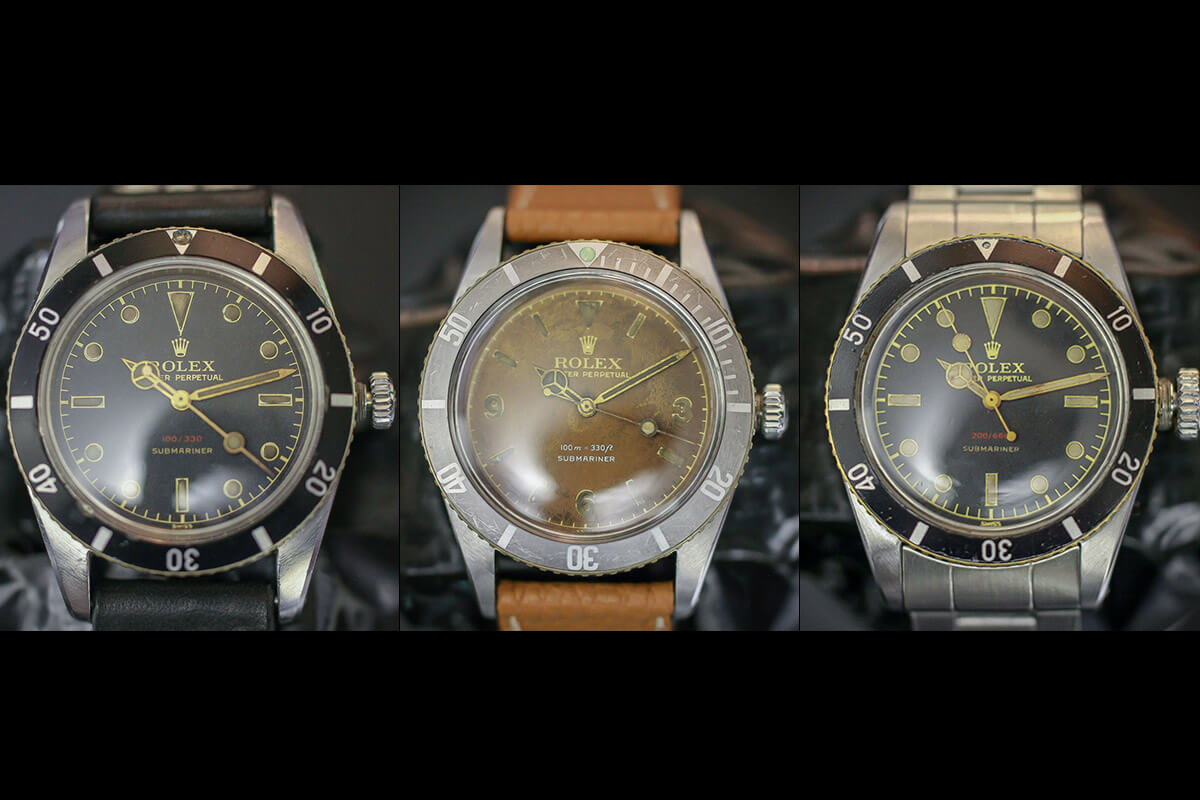 We mentionned it this morning, when reviewing one of the rarest Rolexes, the Single-Red Sea-Dweller 1665 Prototype: there are rare and collectible vintage timepieces and there are the once-in-a-lifetime ones. For sure, this SD is such a piece but we also found some pretty interesting early Rolex Submariners (yes, that an understatement) that you won’t able to see everyday. Here are three of the most sought-after Subs, a 1955 Ref. 6536 with red depth rating, a 1955 Ref. 6536 with ultra-tropical ‘Explorer‘ dial and finally a 1956 Ref. 6538 ‘Big Crown‘ with red depth rating.

To clarify the context, the Rolex Submariner was introduced in 1953 with the ref. 6204 as one of the very first professionally oriented dive watches. At that time it featured almost all the classical attributes of a modern Sub, meaning a rotating bezel with 60-minute scale, large indexes and hands with luminous material, a black dial for a better contrast and a 100m depth rating (changed after to 200m and 300m for modern editions). Rolex did several updates to this early example to finally come in 1955 with the Submariner Ref. 6536. This specific reference is a very rare one, as only an approximate 100 pieces were produced. This no crown-guards Ref. 6536 was produced for only 1 year, in 1955.

Here are the specifications:

Later (in 1956) Rolex came with a new reference, the Rolex Submariner 6538, that improved the water resistance with a 200m depth rating and a large crown – which explains the nickname ‘Big Crown‘. Basically, these two references are extremely close, with a similar case, bezel, dial and hands. 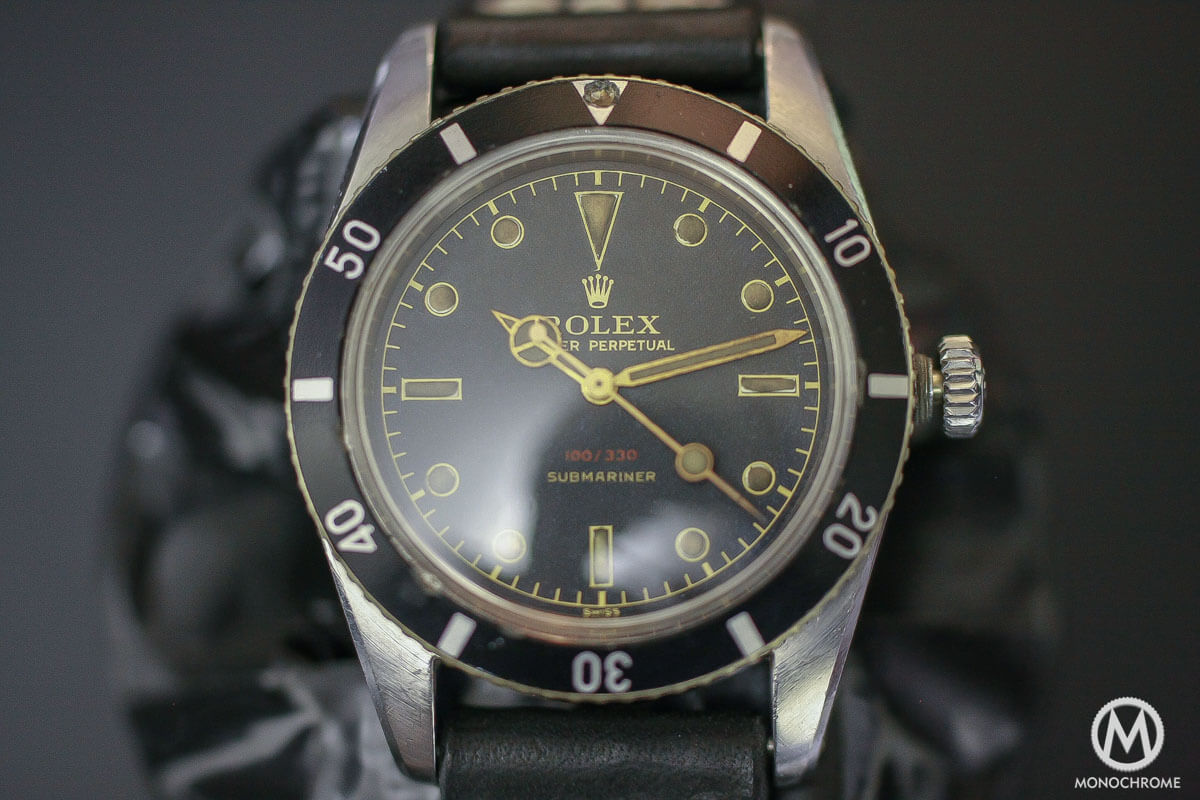 The first early Rolex Submariner we found is one of the 100 (+/-) Reference 6536 that were made in 1955. It has a 5 digit serial number (meaning that it is one of the earliest models). As you can see, it comes in a superb condition (don’t forget that it’s a 60 years old lady), with a beautiful patina and matching hands and indexes. That’s already quite a rare watch, however there is something more: the red depth rating. It seems that Rolex did some tests at the beginning of the production with a red indication of the water resistance (written here only 100 / 300 instead of the usual 100m = 330ft). If the Rolex Submariner Ref. 6536 is already a rare bird, a red depth rating Rolex Submariner Ref. 6536 is an ultra-rare one, as only 10 of them are reported. 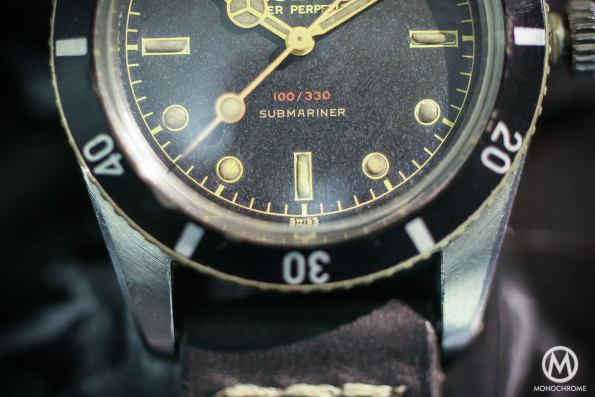 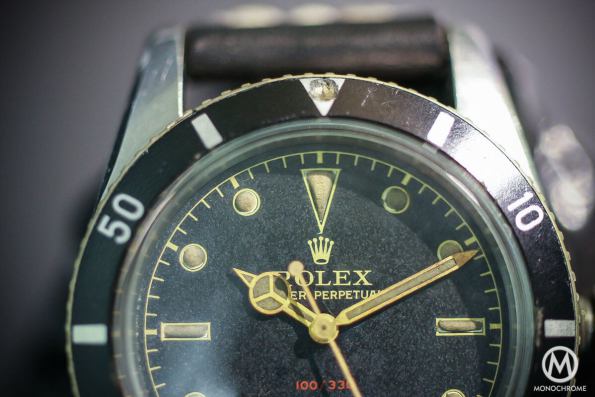 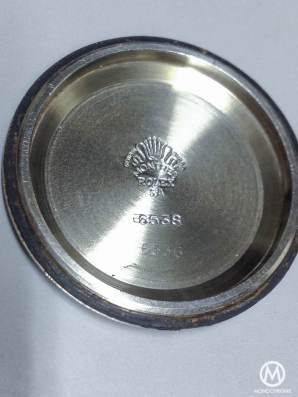 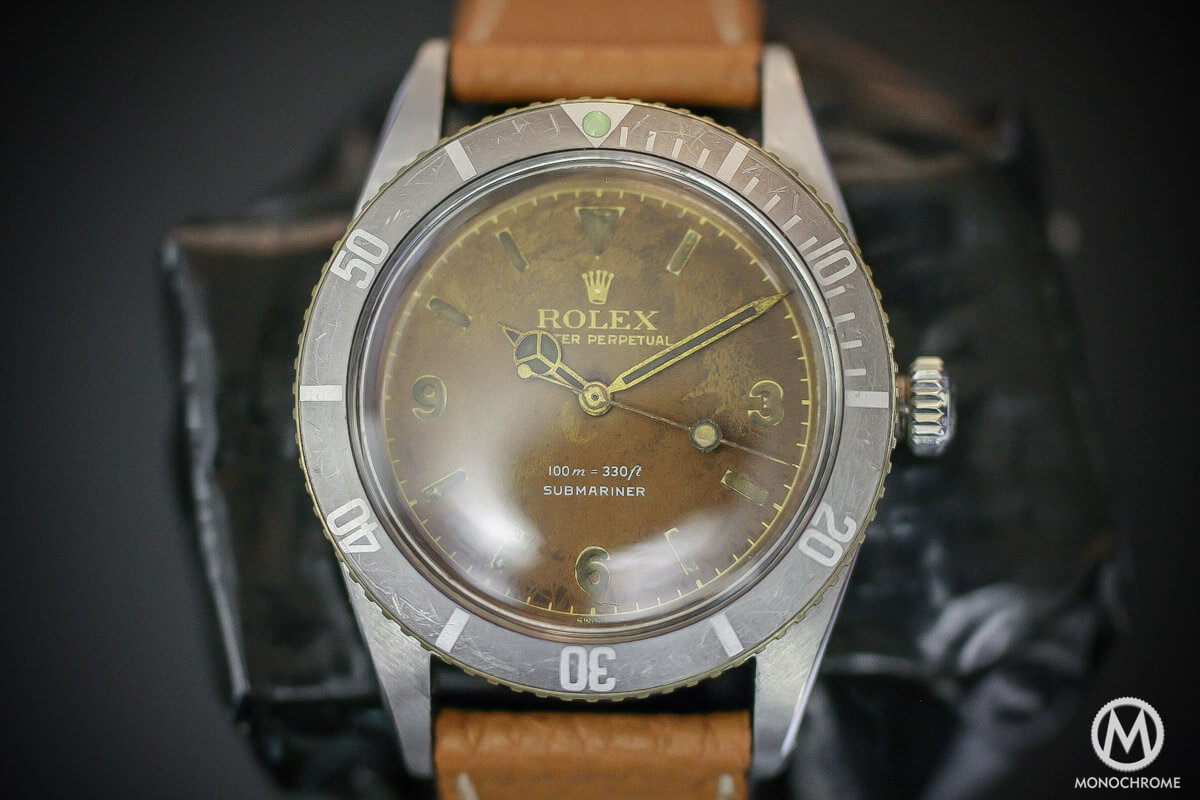 Now that’s the kind of watches that not everyone will like. Some will hate it, some are literally dreaming of it. The ultra-tropical dials are certainly not for everyone but we have to admit that they usually achieve incredible prices during auctions (look at the coffee tropical Rolex Daytona Paul Newman sold for 336.600 Euros recently). It has to be said: the quality of the lacquers used by Rolex (and other manufactures) at that time was not the best one. Due to this lower quality, the dials of vintage Rolexes might, under the influence of sun, UV or water turn to a dark brown or a green colour. Sometimes it’s even worst and the result is this kind of ultra-tropical dial, with a caramel / orange colour. Same goes for the bezel insert that turned into a light grey colour – what collectors call a shadow bezel.

This unique patina is not the only attribute of this 1955 Rolex Submariner Ref. 6536 as it also features an ‘Explorer‘ dial, meaning that it has the 3-6-9 indexes instead of classical baton indexes. As the first Sub we showed you, we’re talking about an early example with a 5 digits serial number and a caseback punched ‘6538’ and overwritten ‘6536’. This combination of rare features creates a possibly unique watch that might make a great impression at a collectors’ dinner. 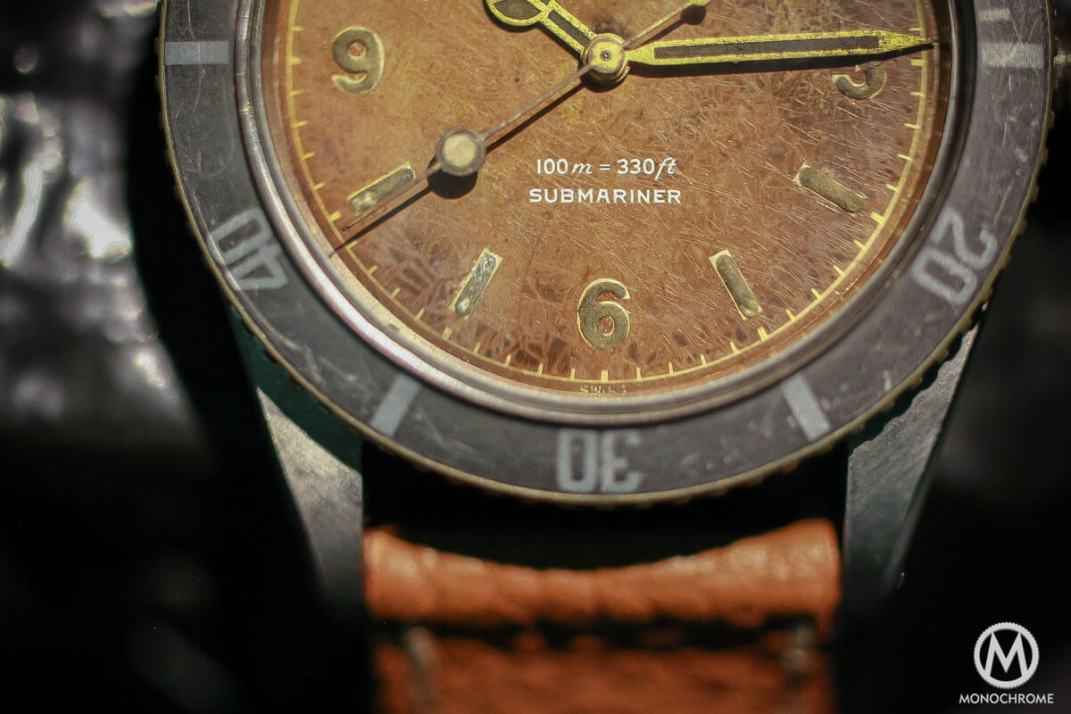 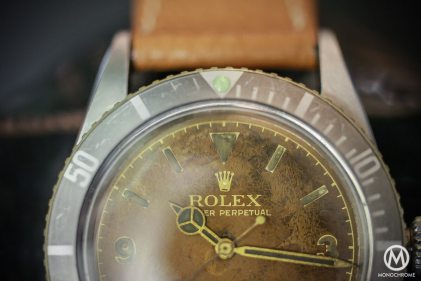 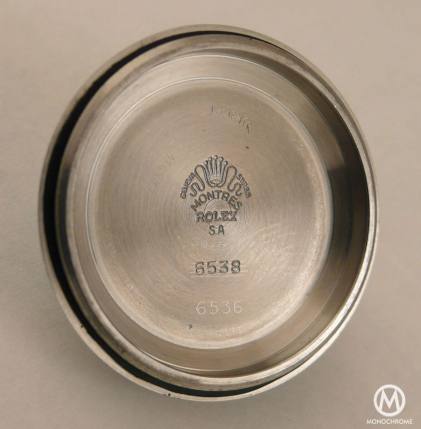 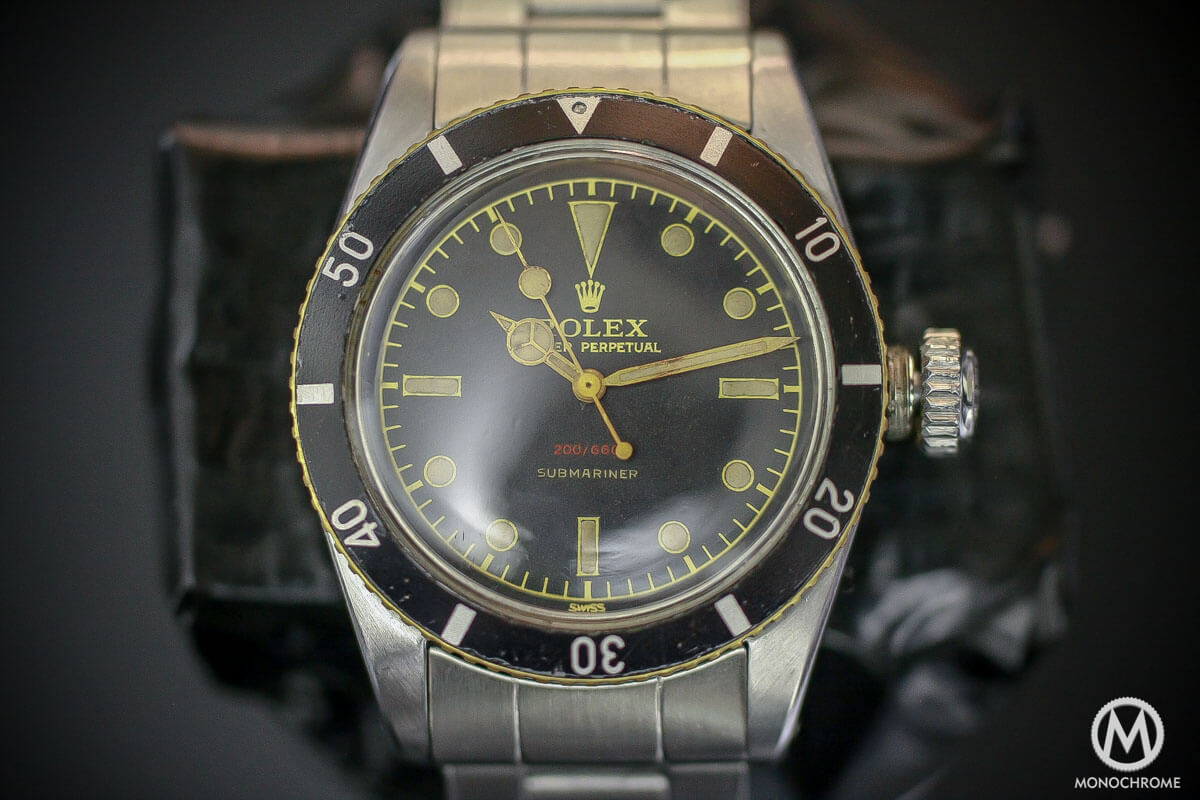 Last bu not least, here is a superb example of another rare reference, a 1956 Rolex Submariner Ref. 6538 ‘Big Crown’. This specific reference of the Submariner is a legend, as it is the one worn by Sean Connery in the very first James Bond 007 movie, Dr. No. The dial with only two lines of text shows that we’re in front of an early example of this reference (later, some will feature 4 lines of text, with the added ‘Officially Certified Chronometer‘ mention, the OCC ones). This reference improved the water resistance with a 200m / 660ft depth rating and a larger crown.

If you take a closer look at the dial, you’ll notice the gilt inscriptions and hands, some of the classical features of the early Subs. The point of interest is not here but in the red line for the depth rating that is painted in red. Once again, these are extremely rare features on vintage Rolex Submariners, making this specific 1956 Rolex Submariner Ref. 6538 ‘Big Crown’ non-OCC Swiss-only Red-Depth-Rating, a very special one. 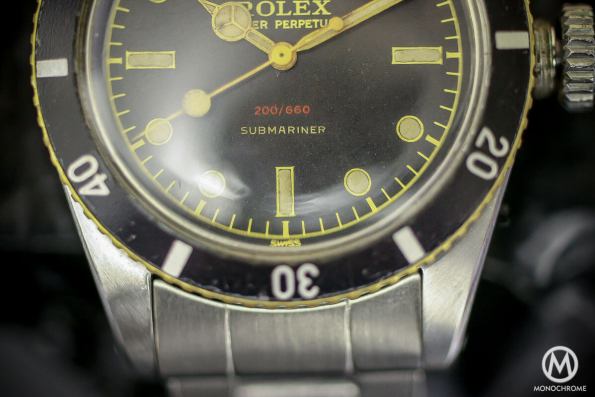 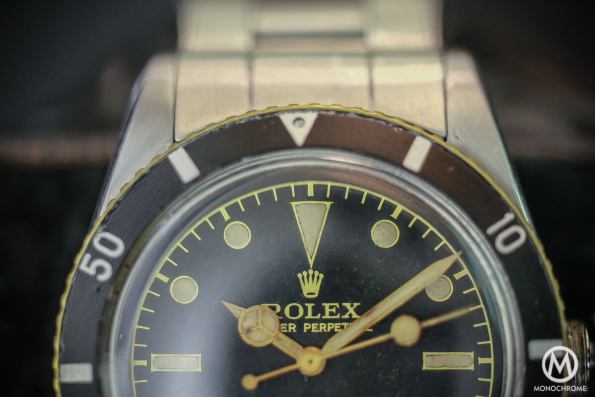 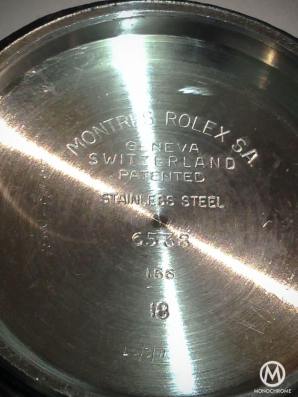 This 1956 Rolex Submariner Ref. 6538 is in a superb condition, with its chamfered lugs, its original bracelet and matching indexes and hands. It is for sale at 175.000 Euros and listed here.

Just like the Single-Red Sea-Dweller, if you have interest in these 3 Submariners, you can contact Christian Bissener from Watch Collector – E-mail: info@watchcollector.lu – www.watchcollector.lu.