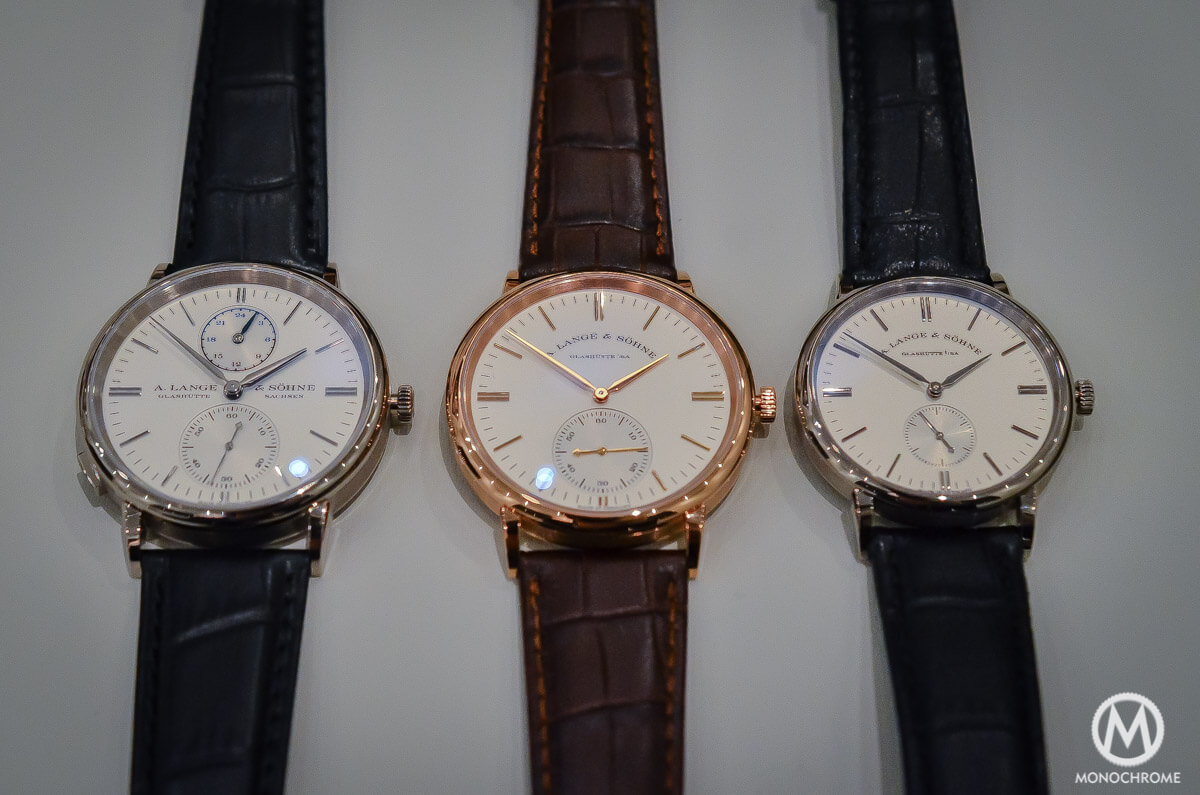 Recently, we’ve seen the evolution of the Lange 1, a watch so iconic that A. Lange & Sohne decided to update only its movement and not to touch its visual aspects (well, except 2 very little details that we’re not even going to mention now). With the Saxonia, the entry-level-understated-classical-dress-but-oh-so-nice collection of the manufacture, we’re in front of the total opposite situation: Lange keeps the mechanics (we’re not going to complain) and updates the design. But don’t wait for a revolution, we’re at Lange and brutality is not an option. Hands-on with 2015 collection of the A. Lange & Sohne Saxonia.

Throwback – the pre-2015 collection of the Lange & Sohne Saxonia 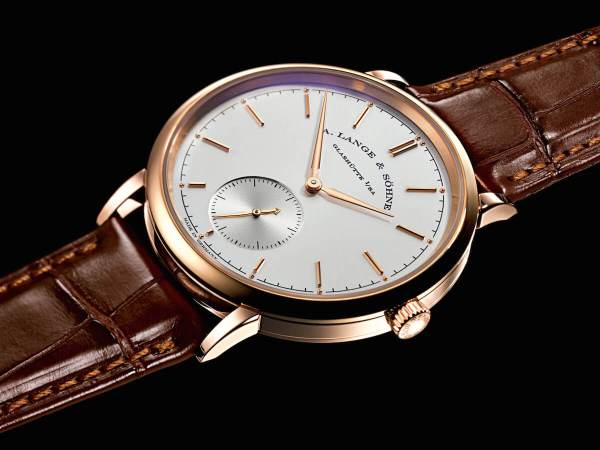 You can see examples of the old Saxonia here and here.

Common features of the 2015 collection of the A. Lange & Sohne Saxonia 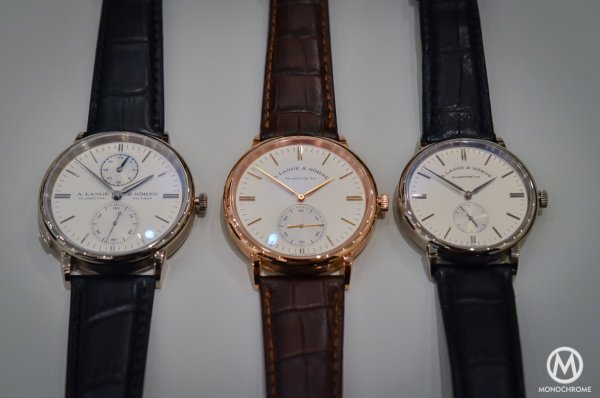 Let’s tell you the truth right away: don’t expect a revolution. The Saxonia is a classic for A. Lange & Sohne and the 2015 collection has to be seen as an evolution rather than an entirely new collection. Changes are only visual and they are minimal. Only some trained eyes could spot the new edition without having the old one next to it. Let’s look at the new features:

Apart from these visual updates – we told you, we’re in front of minimal evolutions – the main difference spotted in the 2015 collection of the A. Lange & Sohne Saxonia concerns the reduced size of the cases. It seems that brands are moving forward since a year or two. After a decade of large watches, brands like Lange (but others will follow) are choosing to move in the other direction with smaller, more elegant watches.

Do remember that until the middle of the 2000s, a dress watch was usually measuring 35mm to 37mm. For the past 10 years, we’ve seen dress-watches growing to some inelegant sizes. Some of these watches could easily come in a 40mm-plus case. However, do keep in mind that a plain, thin, dress-watch (with no complications or just a small second) sized over 40mm usually looks like a fried egg – and we’re not even talking about the issue of the size of the movements, usually way too small for the case (leading to date windows in the middle of the dial and caseback adorned with superb movement rings).

When A. Lange & Sohne showed us for the first time this 2015 Saxonia collection (that you can see here), our Editor-in-Chief ‘applaud that kind of bravery‘, because it needs a bit of that bravery to decide to go small when everybody goes big. However, designers at A. Lange & Sohne went to the school of elegance and they know that a dress watch has to be small. Let’s see in details the three editions of the 2015 Saxonia collection. 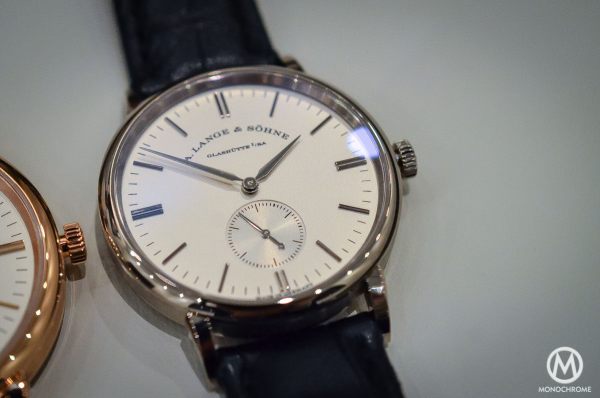 The A. Lange & Sohne is the exact definition of an understated, thin, plain, discreet watch. It’s simple, elegant and it has nothing more than a small second on its dial. We’ve seen the older edition of this watch in details here and the new one is following the same rules – but in a smaller case. At 37mm, the older edition wasn’t what we can call a big watch. In the actual market, it could easily be called small. However, this 37mm was only existing since 2007, as before, the Saxonia hand-wound was measuring a very restrained 34mm. The 2015 A. Lange & Sohne Saxonia comes with a new case that measures 35mm. Yes, it is small, but not too small. 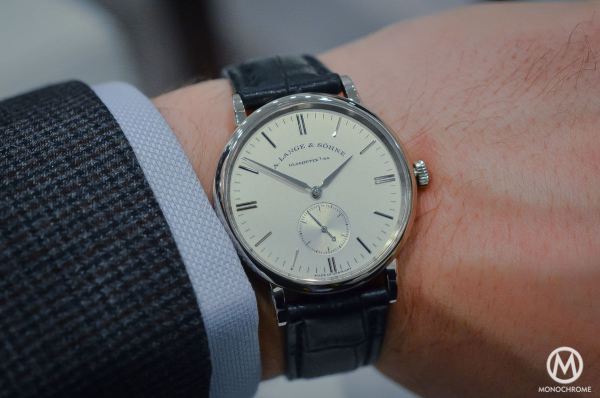 Once strapped on the wrist, there’s plenty of charm coming and this smaller case even creates a watch more lively than before. The smaller dial combined with the longer indexes makes the watch apparently more busy. Of course, this size will look a bit odd on a man with a very large wrist. However, on the average gentleman and combined with a business attire, this Saxonia hand-wound is just perfect. 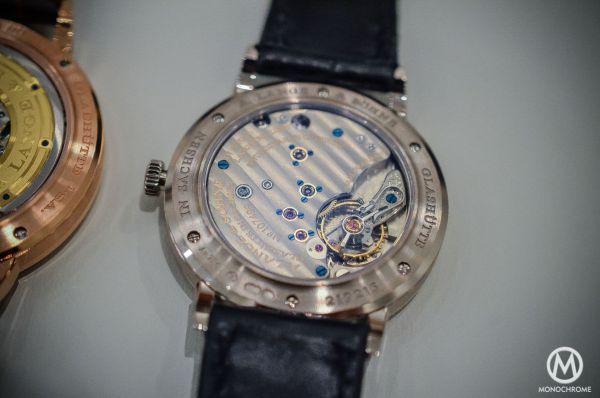 As said, the collection remains technically untouched. We find back the Calibre L941.1, a manual movement with the typical ¾ plate and the engraved cock bridge – two unmistakable features of A. Lange & Sohne. This watch might be the entry-level of the brand, the finish (of the case, the dial and especially the movement) is the same as with the rest of the range of watches – meaning exquisite. 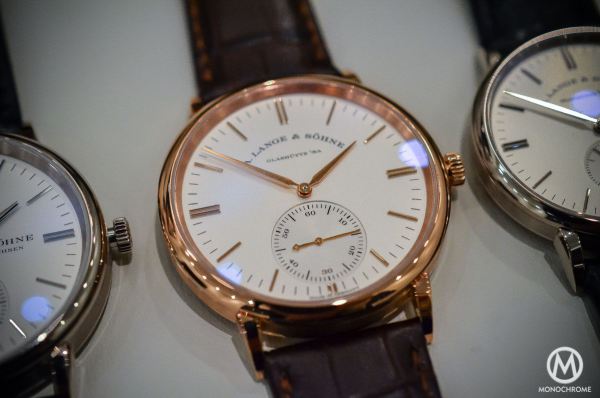 This is probably the edition that is the closest to its older iteration. Changes here are only concerning the dial as the case remains sized at 38.5mm. So we have the new indexes, the new minute track and the new subsidiary second dial in the exact same case as the older edition. It has to be said, 38.5mm remains an excellent choice for a dress watch, whether it will be worn by a robust man or a man with a smaller wrist. It will be elegant in every situation and will show the right presence on the wrist. 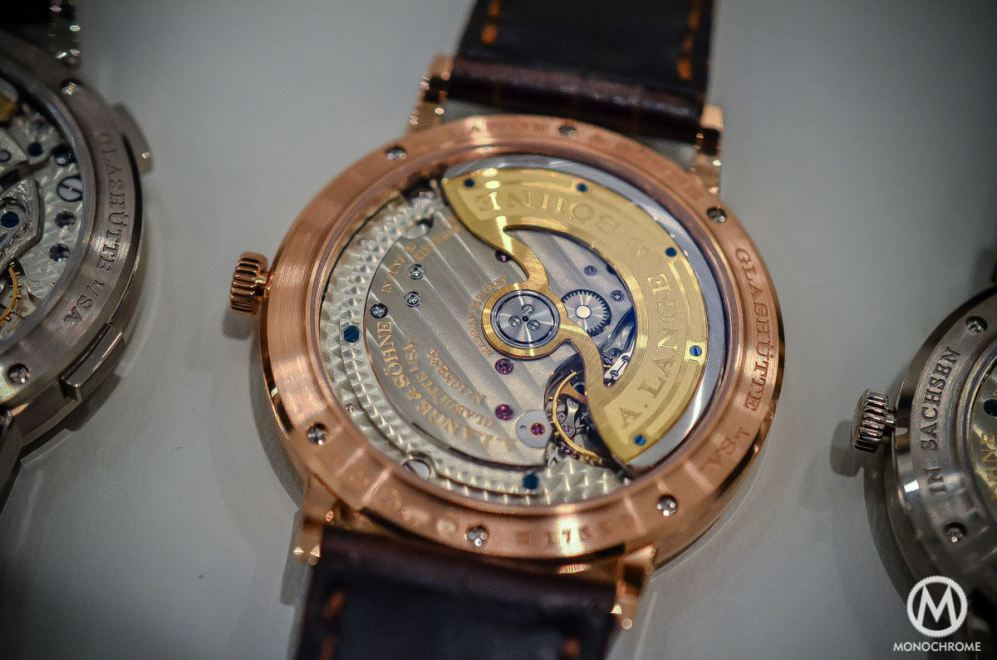 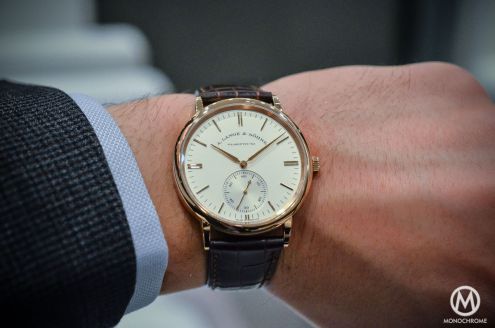 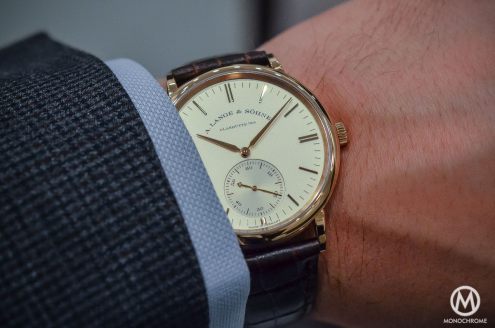 The reason why A. Lange & Sohne kept the 38.5mm case is also guided by the movement, here the automatic Calibre L086.1 that is actually quite large at 30.4mm. It is also a rather slim movement at 3.7mm (and Lange’s thinnest automatic calibre), allowing the A. Lange & Sohne Saxonia Automatic to have a 7.8mm only profile. This movement features a central rotor (A. Lange & Sohne usually goes for off-centred rotors in the other collections) in gold with a platinum mass. It boasts 72 hours of power reserve and, like the other Saxonia, features the superb Lange finish. 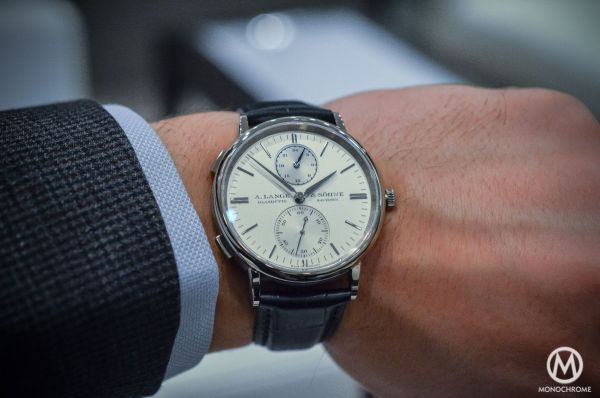 The third and latest edition of the 2015 collection of the A. Lange & Sohne Saxonia to undergo an update is the Dual Time edition, and just like the hand-wound model, it features a smaller case, at 38.5mm to be exact (instead of 40mm on the previous edition). This diameter seems to be A. Lange & Sohne lucky number, as the Lange 1, the Saxonia Annual Calendar, the Langematik Perpetual or the 1815 all have a case with these same dimensions. 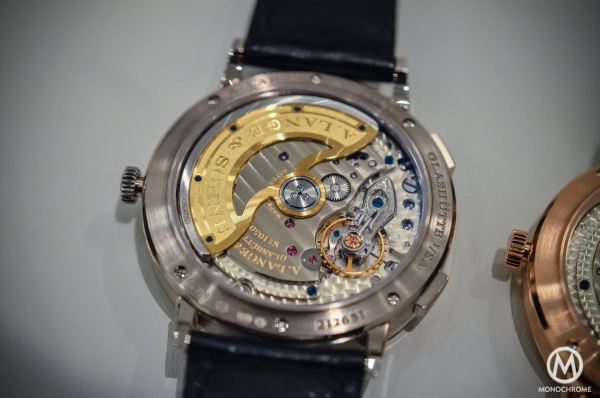 The Saxonia Dual Time features the Calibre L086.2, which basically the same movement as the Saxonia Automatic with two extra-complications: a 24h indicator (that can be seen at 12 on the dial) and an extra hand for the second-time zone (that is hidden behind the main hour hand on our photos). The two-pushers on the case band allow to move the hour hand forward and backward by one-hour increments.

Again, we’re delighted to see this watch in a smaller case as it clearly enlivens the dial that seems busier, with less ‘white empty zones‘ for an overall more modern look.