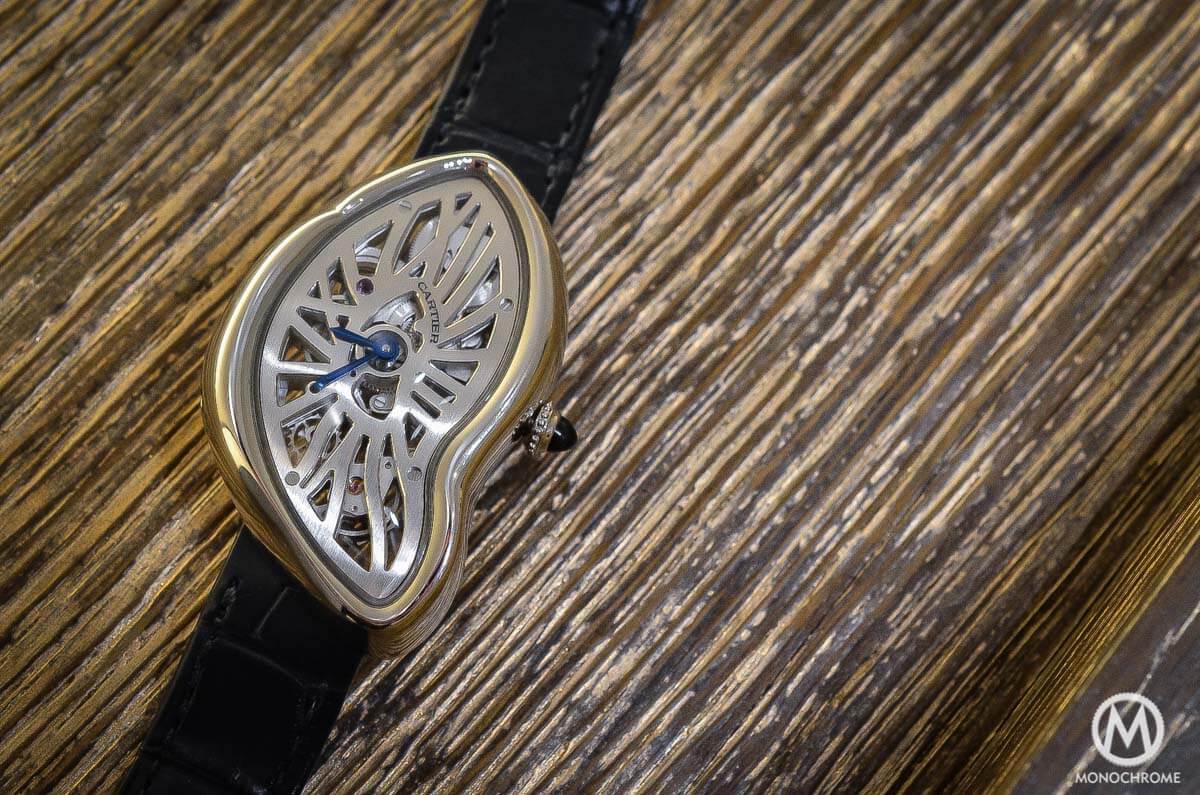 A few month ago, we explained you why Cartier should be taken seriously in terms of watchmaking. Forget about the jewelry image of the French Maison, they are now able to create both classical watches (with a deep historical background… did I say Tank?), modern collections (like the new Clé de Cartier or the diver watch Calibre de Cartier) and mainly superb Haute Horlogerie timepieces (like for instance the recent Rotonde de Cartier Grand Complication). Cartier is also very strong for skeleton watches and one of their latest creation shows this skills in a surprisingly original way. Here is our hands-on with the Cartier Crash Skeleton in platinum.

Let us rewind a bit the tape and go back on the latest watches introduced by Cartier. If you look closely, the French Maison focused its haute horlogerie collections mainly on squelette / skeleton watches. Here’s a quick list of skeletonized timepieces made by Cartier:

We especially invite you to look at the latest, the Tank MC. This watch is now typical to Cartier’s production of skeletonized watches. Instead of just opening a movement to reveal parts, Cartier found a very interesting and unique way to shape the bridges like Roman numerals, meaning that the movement itself becomes an integral part of the display. This layout can be found in several collections like the Tank but also the Santos Dumont, the Santos 100 and the Rotonde. These open-worked movements are both functional (as they hold the mechanical parts and they indicate the time) and decorative. With its new Cartier Crash Skeleton, the manufacture brings back this specific construction and at the same time re-introduces a very unique watch created during the 1960s. 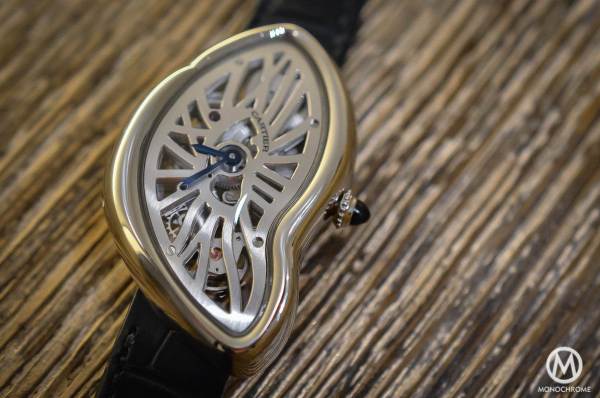 In 1967, Cartier used the libertarian and effervescent trend to create a deliberately unpredictable watch with an original and deconstructed shape: the Crash. Everything from the case to the dial was erratic and asymmetrical. As reported by expert Paul Boutros (International Strategy advisor for Phillips Watches), the Cartier Crash ‘came about following a fatal car crash which took the life of a Vice President at Cartier’s London office. He was wearing a Cartier Baignoire Allongée, which sadly melted as the car burned. As a tribute to the fallen executive, the Crash watch, resembling the mangled watch, was born.‘ (as read here). These watches are now extremely rare and sought after (prices are north of 100.000USD) and this also goes for the 1991 re-edition that Cartier produces in 400 pieces. 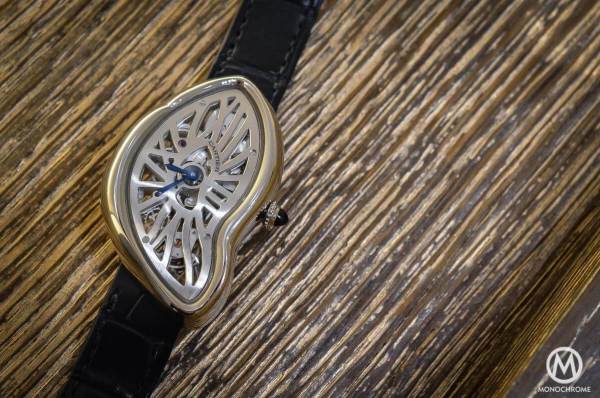 However, for 2015, Cartier is not again launching a simple re-edition but rather a reinterpretation of the concept, mixed with the serious watchmaking skills of the manufacture. The case (that measures 45mm x 28mm) is made in fully polished 950 platinum and shows the actual and asymmetrical shape of the antique Crash. The convex flank on the left side features a knocking and the right side is rather concave and sculpted – this shape is totally faithful to the original 1967 edition, even if larger. Both the top and the caseback are curved, meaning that even if the Cartier Crash Skeleton is a tall watch, it adapts easily on the wrist.

On paper, it is a rather small looking watch – especially when you consider the 28mm width, a dimension usually found in women’s watches. For sure, this Cartier Crash Skeleton is delicate and could easily adorned an elegant lady’s wrist. However, it also perfectly fits on a man, due to the complexity of the case, the movement, to its height and the surprising presence it has once strapped on the wrist (and don’t forget that a Cartier Tank Americaine Grand Modèle, a watch dedicated to men, measures 45mm x 26mm). 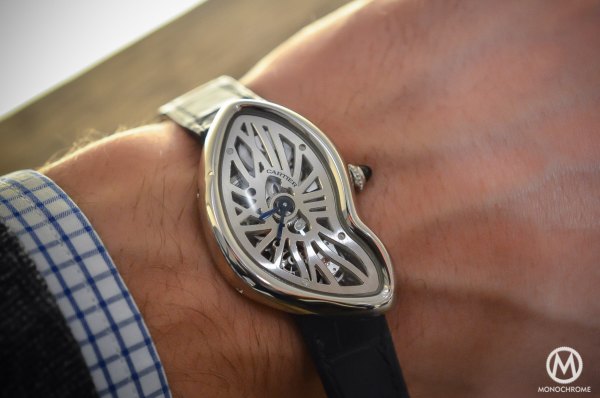 The other surprise comes from the movement that is a proper shaped engine – something that we don’t see often nowadays. Of course, there are some square or oval calibres available on the market but no other manufacture can argue of such a strangely shaped movement. The Calibre 9618 MC perfectly adjusts the shape of the case – while the original Cartier Crash featured a round movement. We’re not even talking of bridges shaped like the case but of a specific arrangement of the technical elements that are placed to fit this shape. Traditional in Cartier watches, the Roman numerals are here melted in the movement to create the dial. Even the upper bridge is curved to follow the lines of the case. All the flat surfaces are straight-brushed and the multiple angles are chamfered and mirror polished. 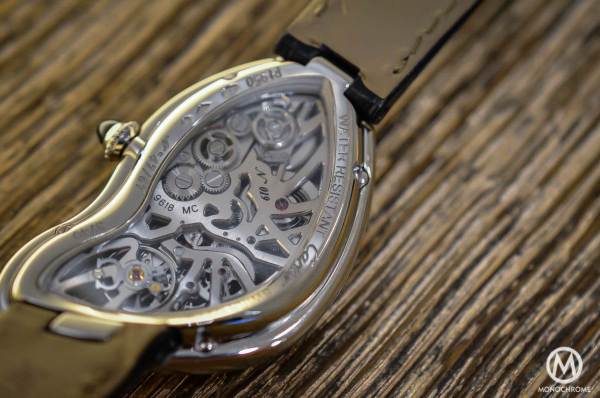 As delicate and small this movement is, it boasts 3 days of power reserve when fully wound (manually of course) thanks to 2 small mainsprings. It only provides energy to two hands (hours and minutes) that are blued and shaped like glaives (again a traditional Cartier feature). Time reading is not very convenient (no real indications of the hours and no perception of the exact minutes) but the view offered by the dial/movement, with its pleasant finish and the shape of the Roman numerals, is alone a source of joy. 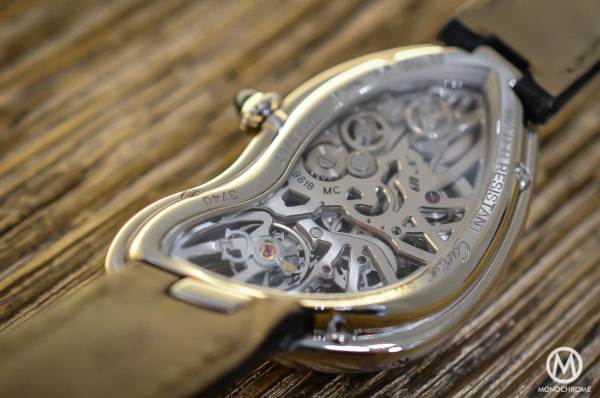 The Cartier Crash Skeleton is a very unique piece that both pays tribute to the rich history of the brand and also exposes the modern and indisputable capacities of this manufacture to create highly interesting movements. This is of course not everybody’s watch and it will require to be fully assumed (due to its look, its complexity and its rather small size). It is a limited edition of 67 pieces and it is priced at 76.000 Euros (retail price inc taxes). More details on Cartier.com.