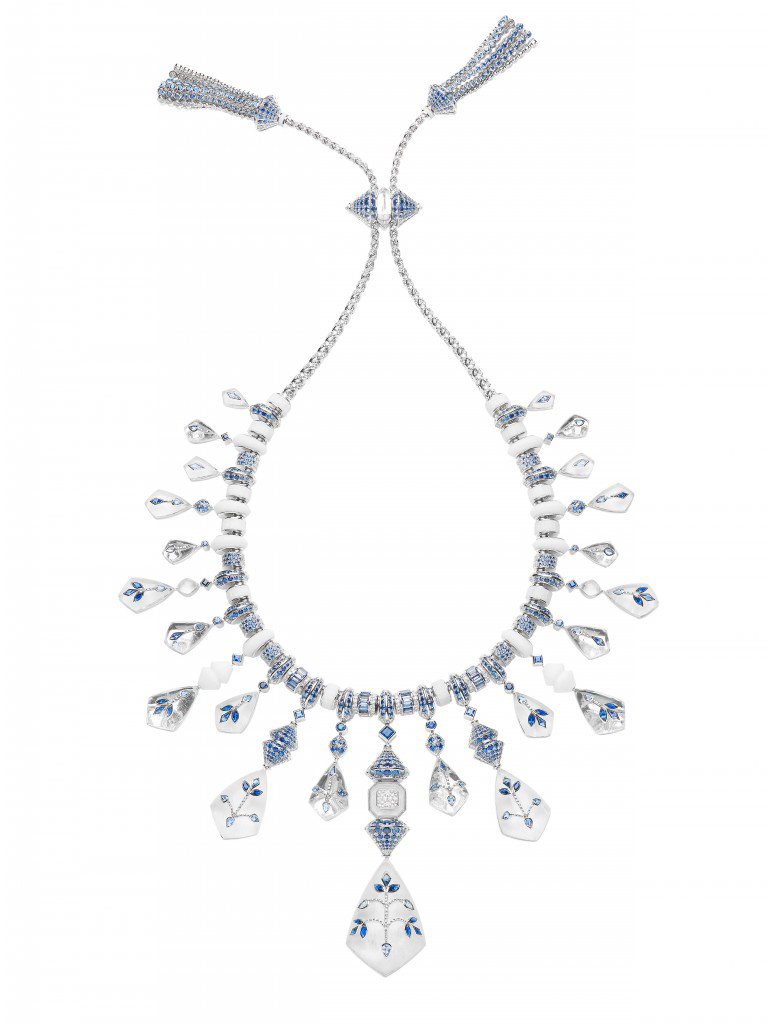 Blue de Jodhpur, the latest high jewelry collection from Boucheron, was born from an encounter between Claire Choisne, creative director of the French house and the Maharajah of Jodhpur, the highness from the Indian city of the sun. A collection of 105 uniques pieces divided into 4 chapters, it showcases the brand’s technical prowess, brining together new materials such as sand and marble against a river of pearls, diamonds and sapphires.

In Chapter One, Jodhpur comprises Art-Deco features that gives a subtle interpretation with a hint of romance of the Indian City including emblematic elements that are easily recognizable. The blue colors of the facades of the houses and the dazzling light of the city are set with sapphires and diamonds in reversible pieces respecting traditional Indian jewelry where the front needs to be as precious as the back. The 450gm Jodhpur Reversible Necklace with a 6.01 carat diamond in the center is a stunning representation made of Makrana marble, the most famous and precious marble in the world, used to build the Taj Mahal.

In Chapter Two, the Indian Palace collection is a tribute to Nagaur, a town in the middle of the desert that gives an architectural feel of India and Rajastan representing the palaces and pavillon rising from the sun in the middle of the desert. Seven being the national lucky number, the Nagaur Talisman necklace has seven rows of pearls strung on silk thread with a rock crystal motif on the center filled with sand from the Thar desert and surrounded by a two-carat cushion cut diamond. This is a statement piece that can be worn in three ways with or without tassle and center motif. From the same chapter, the Plume de Paon necklace is the first made without a clasp from marble and diamonds designed after the national bird of India: the peacock that has always been an inspiration.

The Chapter Three named Garden and Cosmos is an animal collection following the artistic Indian movement where blended together, the ‘garden’ part celebrates life and feasts and the ‘cosmos’ depicts the scene of the creation of the world. The Fleur de Lotus necklace is a mix of flora and fauna in which a tremendous work for stone research needed to be done in order to set a 15 carat pink tourmaline in the shape of a kite surrounded by rubellites and orange spessartite garnets… imitating the lotus flower petals.

The last chapter of the collection, the Maharani pays tribute to Indian women praising their strength and femininity. A 100-years-old tradition where the bride is surrounded by elder women to have henna applied on her full of Mehndi symbols. Claire Choisnes transformed the hand and feet natural decorations into jewelry creations such as the diamond brooch in curved graphic and light a lace that can be converted into a necklace … perpetrating the Boucheron tradition of multi-wear jewelry.