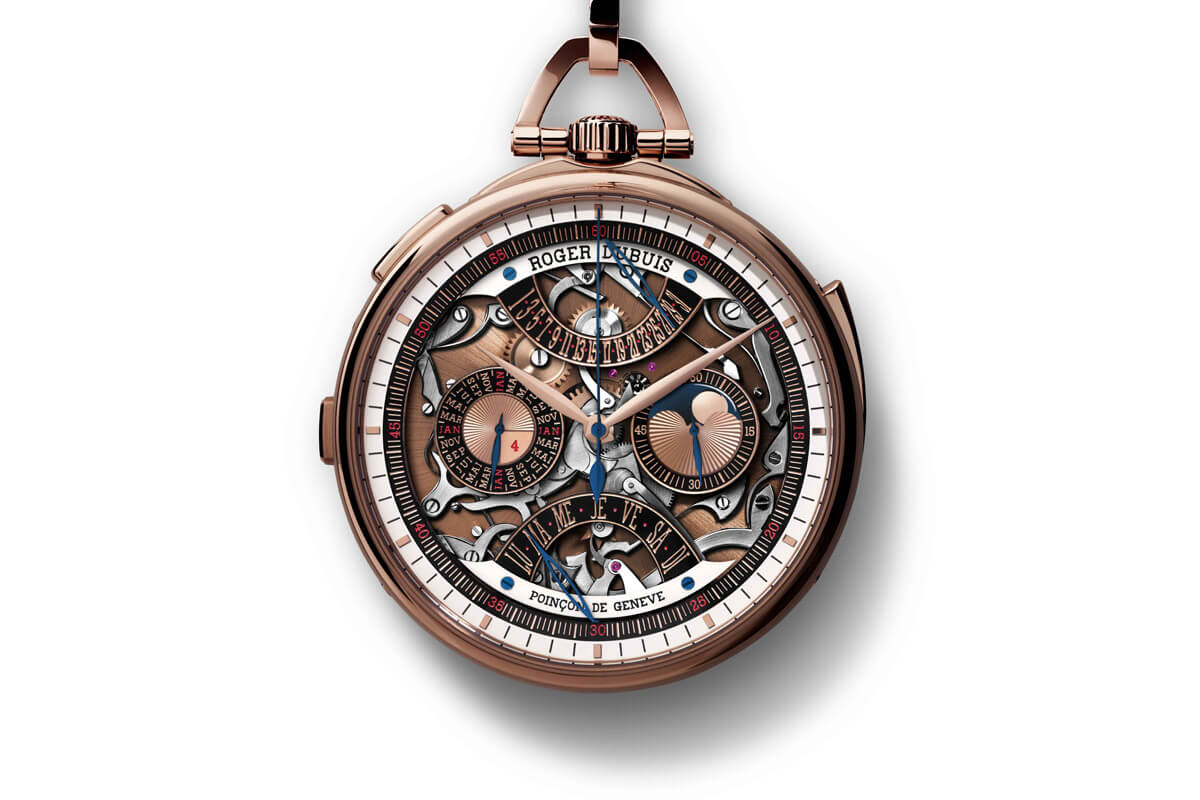 Roger Dubuis is quite a unique manufacture, with a specific approach of watchmaking an a production only focused on ultra-hihg-end movements, on skeletonization and (unique fact in the industry) and with collection entirely adorned with the Hallmark of Geneva (Poinçon de Genève). We’ve seen totally crazy pieces, like for example the Pulsion Skeleton Flying Tourbillon or the Excalibur Spider Double Flying Tourbillon. However, for the 20th anniversary of the brand, there is a project even more special that the Manufacture just launched, the Hommage Millésime collection, with the idea to restore old pocket watches movements and to case them in modern timepieces.

The concept introduced by Roger Dubuis is both rare (at least when created by a big name of the industry) and highly interesting. In order to celebrate its 20th anniversary (and watchmaking in general), the only watchmaking Manufacture to be 100% Poinçon de Genève certified is re-launching a unique restoration project. A series of antique movement blanks will be restored using ancestral crafts and upgraded to meet 21st century Poinçon de Genève specifications as part of an exceptional series of limited editions. Each watch will incorporate a perpetual calendar, either alone or accompanied by one or more of the other three most sophisticated horological complications – minute repeater, tourbillon or chronograph. These models will be available exclusively from Roger Dubuis boutiques and systematically related to boutique openings. The first one to be presented is a unique, massive and highly complicated pocket watch that will celebrate the new boutique in Geneva (that just opened its doors in July 2015). 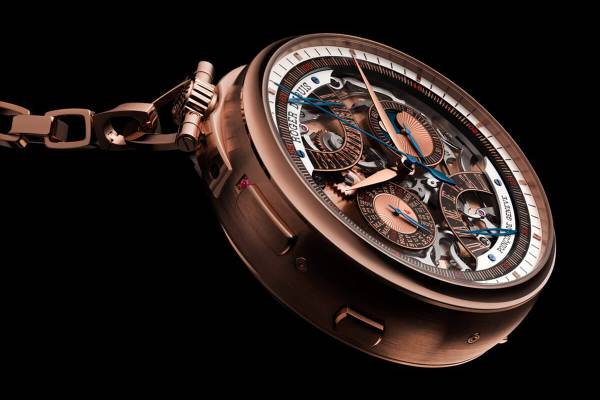 This 60mm pocket watch features no less than a minute repeater, a double retrograde perpetual calendar and a chronograph. As all the future watches of this Hommage Millésime project, this unique pocket watch is based on a calibre gifted by Mr Roger Dubuis himself that was restored using the most authentic artistic crafts and techniques. It comprises the RD181 calibre, a late 19th/early 20th century ébauche (that already featured these 3 complications) but that was restored, completed and re-assembled using antique techniques but with the goal to pass the actual requirements of the Poinçon de Genève – meaning that the entire movement was reworked and finished by hand. 2 years of development and 1.950 hours of work (including 700 hours of restoration only) were needed to complete this movement. 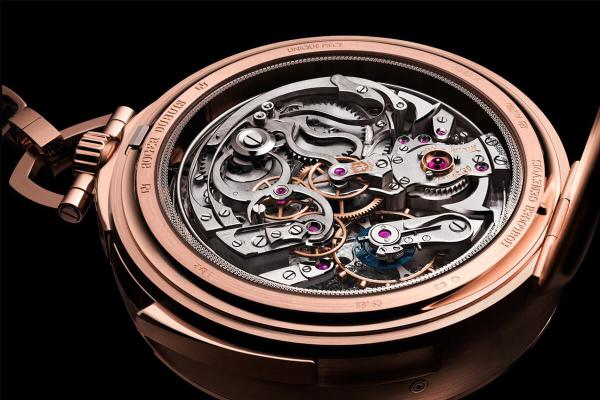 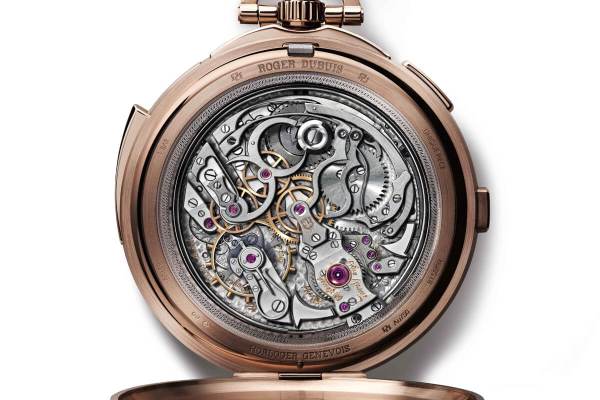 The display is more modern and meets with some of the actual watches of the brand. The perpetual calendar was modified to host 2 retrograde hands – one for the day of the week and one for the date – something reminiscent of the first perpetual calendars produced by Roger Dubuis. The movement had a damaged mainplate, crown and strike wheel, all requiring serious work involving disassembling, decoration and reassembly without damaging them. Another modification concerns the chronograph levers that are now shaped like an 8, a lucky number that appears in all Roger Dubuis limited editions. Talking about this complication, you’ll note that we’re in front of a mono-pusher chronograph – that is actuated by the pusher at 9. 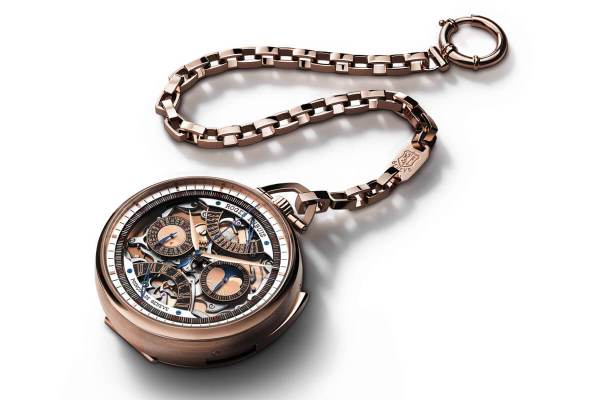 The movement may be restored from an antique ébauche, the case and look are modern and brand new. The 60mm case is made of 18k pink gold and features a convex bezel and contrasting satin-brushed/polished finishes. It is attached to a solid gold chain (that the owner will be able to personalise, by replacing various links with a series of 5N pink gold plaques that may be engraved with messages). The dial is here partially opened, revealing some parts of the perpetual calendar. Several finishing techniques are applied, including heat-blue hands, a sunburst pattern on the gold perpetual calendar plate and guilochage on the month and on the moon sub-dials. All the levers visible (as the rest of the movement) are of course painstakingly finished, with straight graining on the flat surfaces and polished bevelled angles. The entire watch is certified by the Poinçon de Genève. 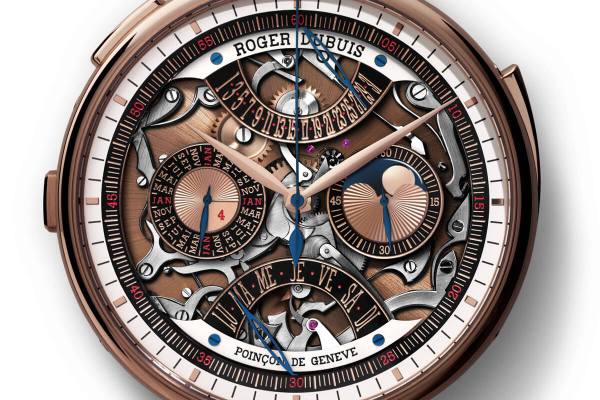 This first edition for the Hommage Millésime project is a pure representation of Roger Dubuis’ savior-faire and it shows the wish to reintroduce restoration as one of the multiple skills of a brilliant manufacture. This unique watch is displayed at the Roger Dubuis Boutique in Geneva and it is available for sale at 892.500 USD. We’re now curious to see what will be the next editions.

Comparative Review – the Breitling Chronomat B01 vs. the IWC Ingenieur Chronograph – WatchTime Wednesday