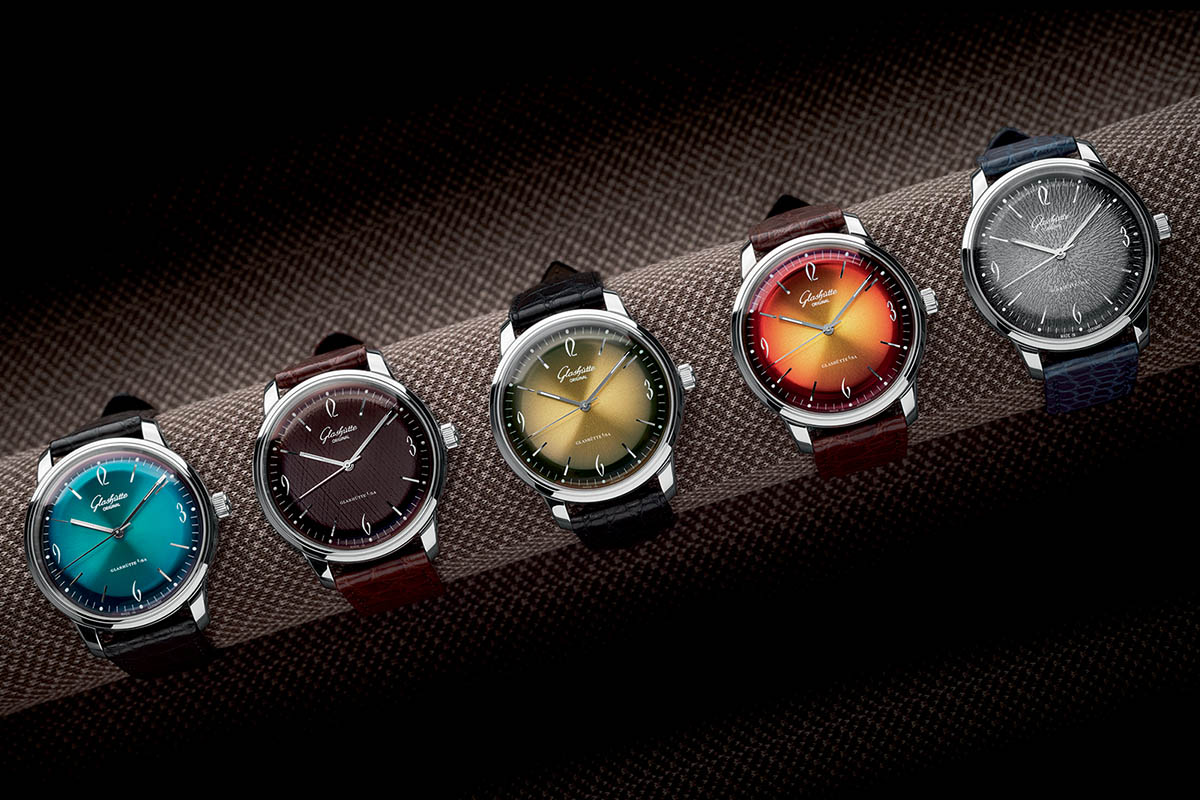 You probably know Glashutte Original for their complicated and very German creations, like the Senator Chronometer or the Senator Chronograph – highly serious watches with an almost austere look and very, very interesting watchmaking qualities. Before these modern watches came out, there were the times of Eastern Germany and Glashütte Uhrenbetriebe (GUB), a time that seen the production of this kind of watches, that the brand revamps with the Glashutte Original Sixties – and today, the brand comes back with a specific feature of these vintages watches, the highly coloured dials, in the name of the Iconic Collection.

The Glashutte Original Sixties plays on the vintage trend, combining the retro feeling of the Spezimatic wristwatches made by state-owned Glashütte Uhrenbetriebe (GUB) with modern dimensions and an interesting in-house movement. The modern Glashutte Original Sixties uses the same type of cases and dials in more modern ways, meaning a 39mm case in stainless steel – with a very simple round shape, elegant and short lugs for a vintage inspired overall look – and highly domed dials with the characteristic font of the Spezimatic for the 3, 6, 9 and 12 indexes.

Inside the Glashutte Original Sixties ticks the manufacture calibre 39-52, an automatic movement with 40 hours power-reserve and a rotor featuring a gold mass and the typical double G shape. It is protected by an original sapphire crystal that covers almost the entire caseback and that is domed – creating a interesting sensation of thinness for the case.

Today, no technical changes on the Sixties but rather a visual update with the new Iconic Collection. Glashutte Original pays tribute to the 1960s era and the bright coloured Spezimatic with a special collection, inspired by the design of these models. The Sixties Iconic Collection comprises five different colours (Sixties Red, Sixties Golden, Sixties Aqua, Sixties Brown and Sixties Grey) and some appealing textured dials and painting techniques.

All five colours show a rather unusual dégradé effect on the dial, which is achieved using a complex and time-consuming process in Glashütte Original’s own dial manufactory in Pforzheim, Germany. The dials are first galvanized and then layers of lacquer are added by hand in a series subsequent steps. The final step gives the degradé / fumé effect, by applying a further colour using a special spray gun – as applied by hand, this effect will create watches all unique in their result.

The first edition is the “Aqua” that relies on a dial first coloured in a bright turquoise at the centre with a sunburst pattern. Then, a second paint is applied, blending into a deep black. It comes on a black alligator strap. Price: 6.300 Euros.

The second edition is the Sixties “Golden”, with a dial first painted in a soft and bright gold tone with a sunburst pattern. Then, a black paint is applied to obtain the degradé effect. The Glashutte Original Sixties Golden is featured with a black alligator strap. Price: 6.300 Euros.

To finish with the vivid colours, we have the Glashutte Original Sixties “Red”, that features not two but three colours, a luminous yellow that changes to intense red (also with a sunburst pattern). The periphery is then painted in black to obtain the fumé / degradé effect (and if you click on the close-up photo, you’ll be able to see the hand-made result). It comes on a brown alligator strap. Price: 6.300 Euros.

For the last two editions, Glashutte Original plays on the softer side. The Sixties “Brown” features a dark brown dial that is enliven by a graphic rhombic pattern (guilloche stamps obtained with with the help of a 60-ton press). The dial goes from a dark brown to a deep black tone. It comes on a brown alligator strap. Price: 6.300 Euros.

The latest edition is certainly the coldest one but also an interesting offer. The Sixties “Grey” features a nice dewdrops pattern (also obtained from guilloche stamps) with a central part lacquered in light grey with a periphery painted in pitch black for the degradé. It comes on a blue alligator strap. Price: 6.300 Euros.

Note: We will soon have online an in-depth review of the Glashutte Original Sixties (in gold and with a classical silver dial) with all the technical details about this interesting watch.