This year at Baselworld, HYT made good on its promise to grow the brand by unveiling not one, but two new collections. Following the path of the hotly anticipated H3, the hydro mechanical horologists at HYT have now also released the H4 Gotham, featuring a new and exclusive skeleton hand-wound movement. 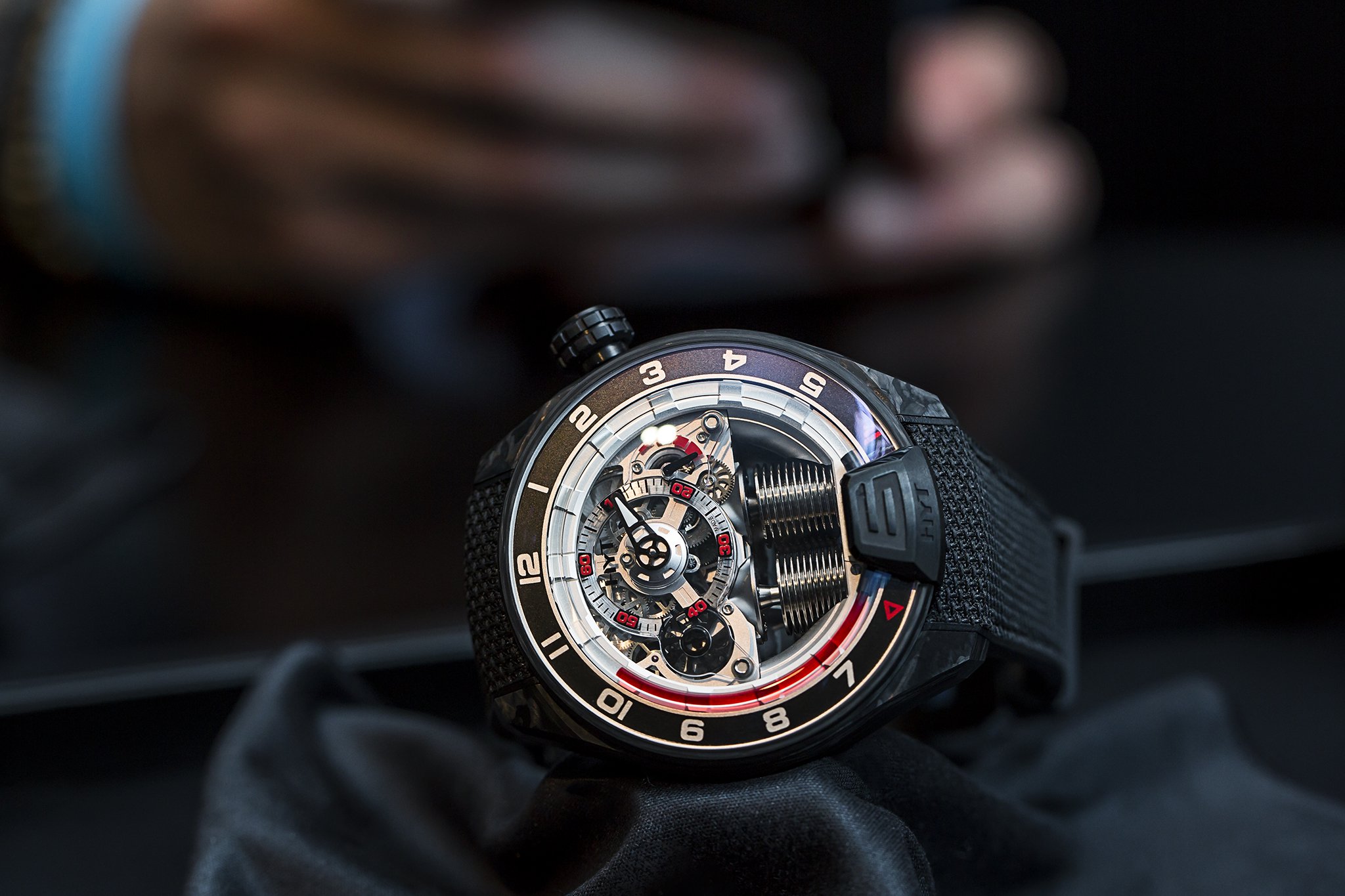 Thematically, the new model is similar to last year’s H1 Dracula DLC and Skull watches, and once again relies on a captivating red fluid hour display and minute dial at 12 o’clock. But the brand has decided to invite collectors deeper inside the HYT universe with a more revealing, openworked dial, exposing the gear train and some of the barrel, while the two vertical rhodium-coated bellows featured between 4 and 8 o’clock are now almost entirely visible.

For an even better look inside, the small seconds wheel at 9:30 and power reserve display at 2:30 are housed by a sapphire disc secured by three anchor points, beneath the convex anti-reflective sapphire crystal. The H4 Gotham also welcomes several aesthetic evolutions from its predecessors. For the first time, the indexes are engraved not on the flange but on the bezel just inside the outer edge of the new 51 mm round case. 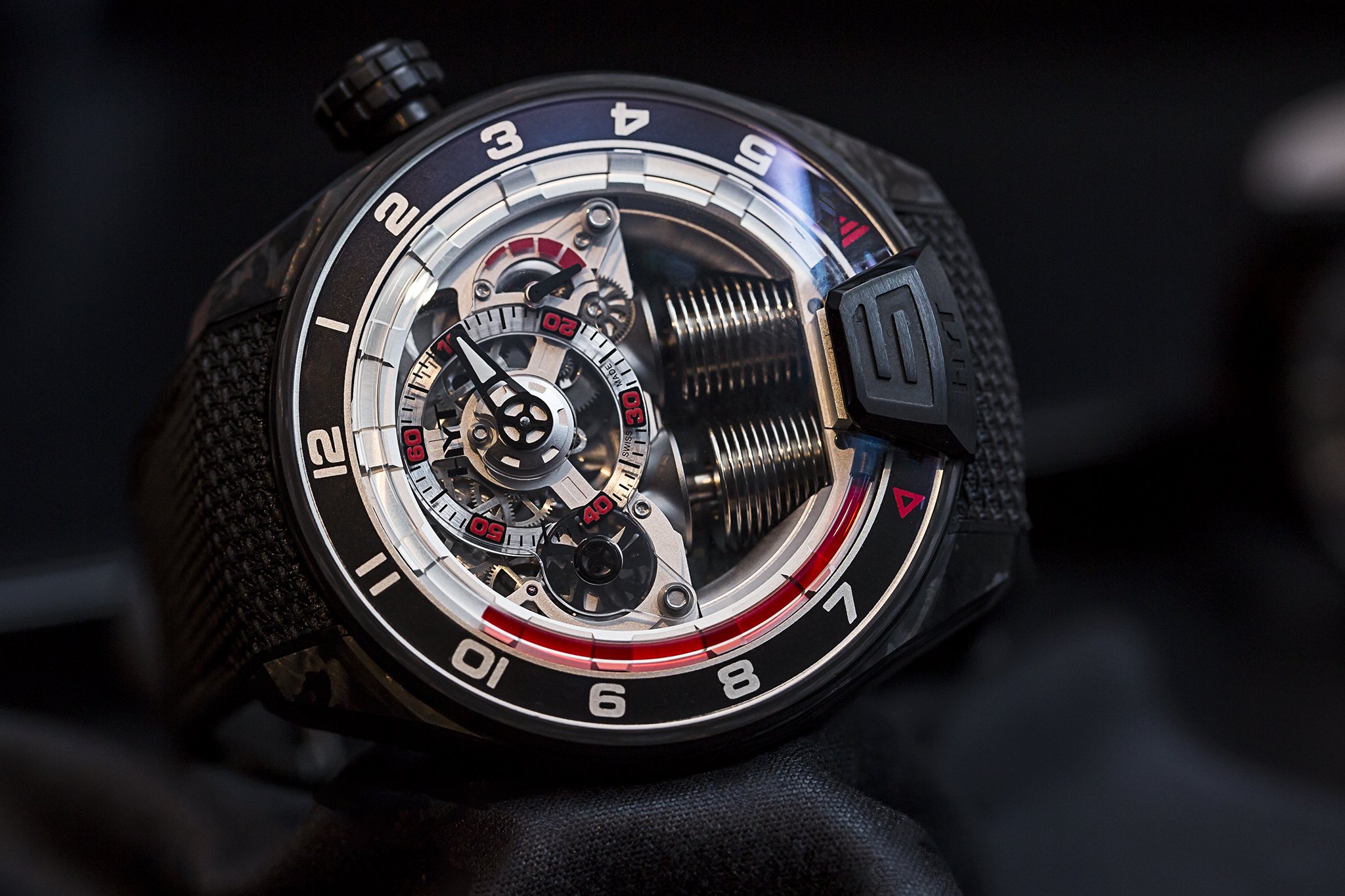 With the H4 Gotham, HYT also introduces its first 3DTP™ carbon case, a super light and rigid material composed of woven carbon threads, complemented by a rubber sheathed screw-down DLC titanium crown and a DLC titanium dome at 6 o’clock. These darker tones of the watch are brought to life by the red liquid inside the capillary, matching the seconds wheel, the power reserve indicator, and the red top stitching on the new black rubber and NOMEX™ technical fiber strap with black DLC titanium folding buckle. 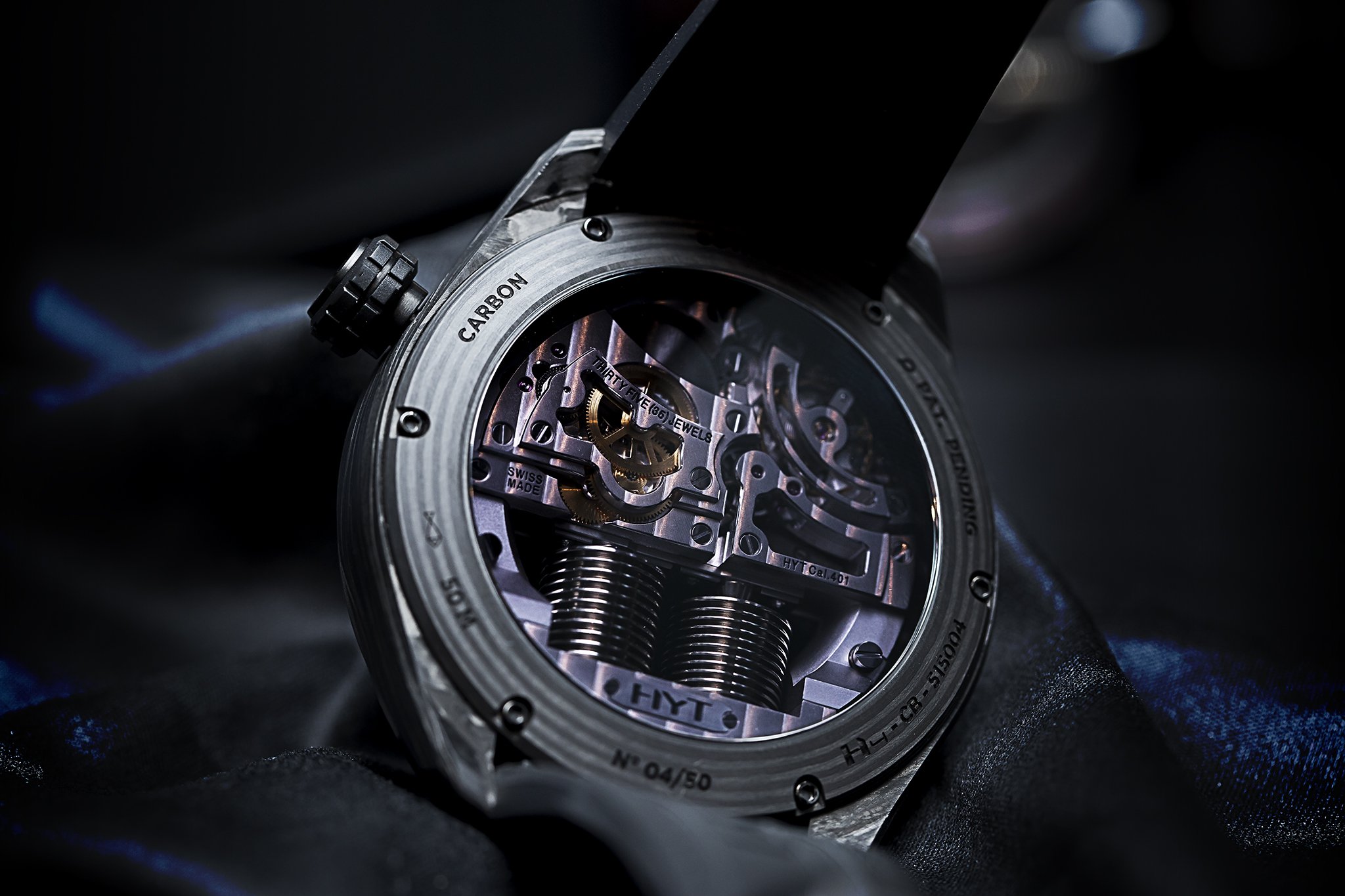 If you’re wondering about the name of the watch, the H4 Gotham has a surprise waiting for you at the back. A new chromium-plated metallized finish on the sapphire crystal reveals the new caliber with hand-beveled bridges decorated with Côtes de Genève. More importantly, it plays a couple of tricks on the wearer. Upon contact with the skin, the case-back finish shows up as a mirror on the dial side, turning the skeleton watch into what looks like a hard case back, while reflecting all the lights and shadows from within, and even your own image from certain angles.

Did you know? Fluid mechanics were invented by HYT in 2012. The mechanism consists of two flexible bellows reservoirs at 6 o’clock fixed to each end of a single capillary. One reservoir contains a colorless liquid while the other contains a colored or sometimes fluorescent liquid. Pushed by a cam propelled by the mechanical movement situated in the upper part of the watch, a piston activates the bellows, compressing one and causing the other to expand and vice versa. This action drives the movement of the fluids in the capillary, with the colored liquid moving forward as time passes. A repulsion force in their molecules separates the liquids, with their boundary marked by a half-moon shaped meniscus that displays the time. Once it reaches 6 o’clock at the other end the colored liquid returns to its original position with a retrograde movement.

Photo Credit: Haute Time. For more information, please visit the official HYT Watches website. Follow Haute Time on Instagram to catch all of the new releases as they happen.