Ulysse Nardin, ostensibly a name synonymous with sailing, creates a limited edition Marine Diver to commemorate its partnership with Artemis racing. The previous America’s Cup race had the growing pains of transitioning from the diminutive-by-comparison AC45 yachts to the staggering AC72 yachts (we featured the changes with Corum). The America’s Cup 72 foot speed machine, which seems a misnomer to call a yacht, so we prefer a “jet-aircraft-on-water,” now comes standard with a solid carbon fiber sail, dual catamaran hull, and the finest in technological innovation. Oracle remains the team to beat, but as in life, competition calls for extraordinary effort, and Artemis, true to its name, returns to the hunt. Ulysse Nardin offers The Marine Diver Artemis Racing as a nautical instrument suitable for the herculean challenge of reaching sailing’s most coveted trophy.

The dive functionality of the watch is recognizable in its unidirectional bezel, which is notched with a wave edge for additional grip. The depth mastery of the 44mm case is printed on the dial, 300 meters. The crown screws down, more easily because of its rubber coating, and fits snugly within the case guard on either side. An anti-reflective sapphire crystal ensures durability and visibility. 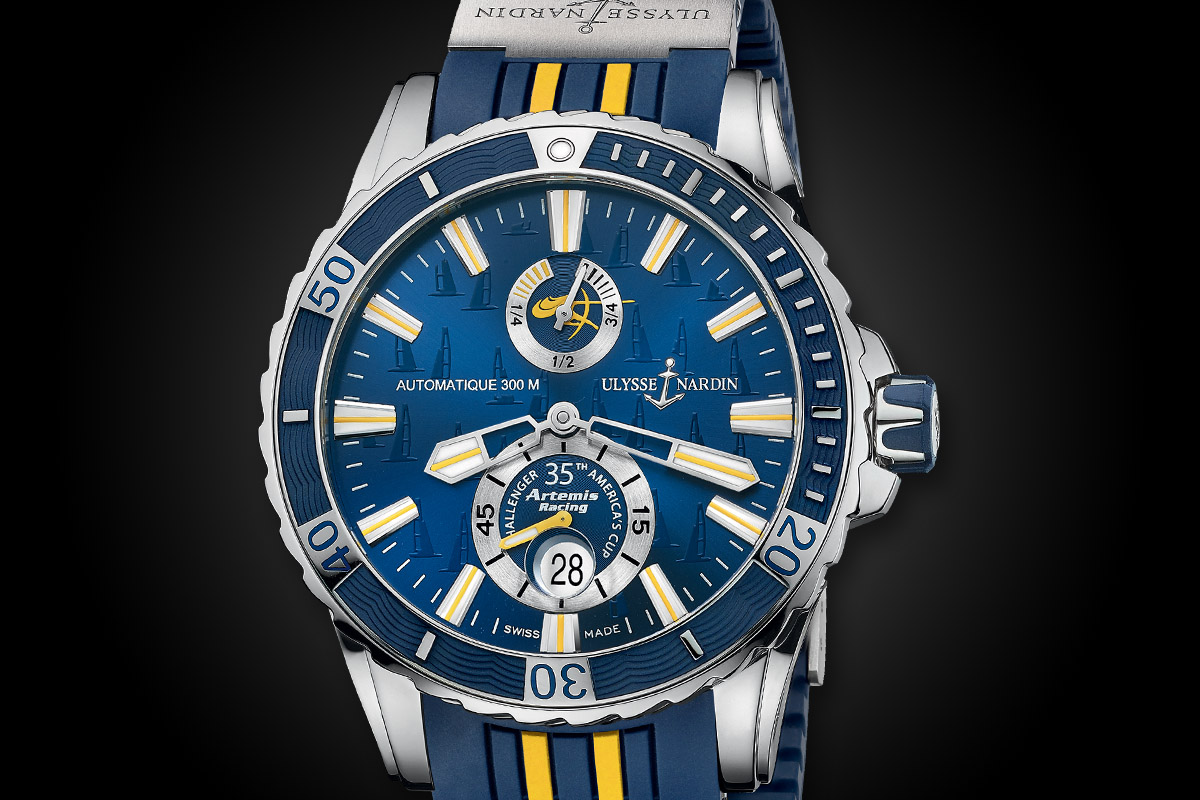 Additional functions are the small seconds dial, which contains a date window at 30 seconds (or 6 o’clock). Below 12 o’clock is a power reserve indicator for monitoring the watch’s 42 hours of power reserve in the automatic caliber UN-26 movement (an ETA 2892 A2 derivative and not the Manufacture movement that can be found in the Marine Chronometer).

Watch sponsorship in THE most prestigious sailing race provides a brand visibility in the sport (see also Omega and the dedicated Seamaster) and opportunity for ultimate bragging rights. When Ulysse Nardin evolved its emblematic Marine Chronometer into a Diver, they retained the classic design, but gave it a dive watch’s functionality and fitness. The Marine Diver Artemis Racing moves from a ship’s casual deck, the province of a Marine Chronometer, to a racing deck where teammates scramble, hike over the edge, and hang on while the ocean fights back.

This commemorative watch is part of the Artemis Team. The dial and rubber strap don the blue and gold from the Swedish flag, a tribute to the team’s country of origin. Sweden has never won the America’s Cup, only 4 countries: the United States, Australia, New Zealand and Switzerland, have won the race. The steel badge on the lower strap is etched with the Artemis logo, the goddess pulling her bow – sailors need good luck charms. The brushed caseback is fully dedicated to the sponsorship with the team logo in front of the yacht, and the words “CHALLENGER 35th AMERICA’S CUP” above and “LIMITED EDITION” below. 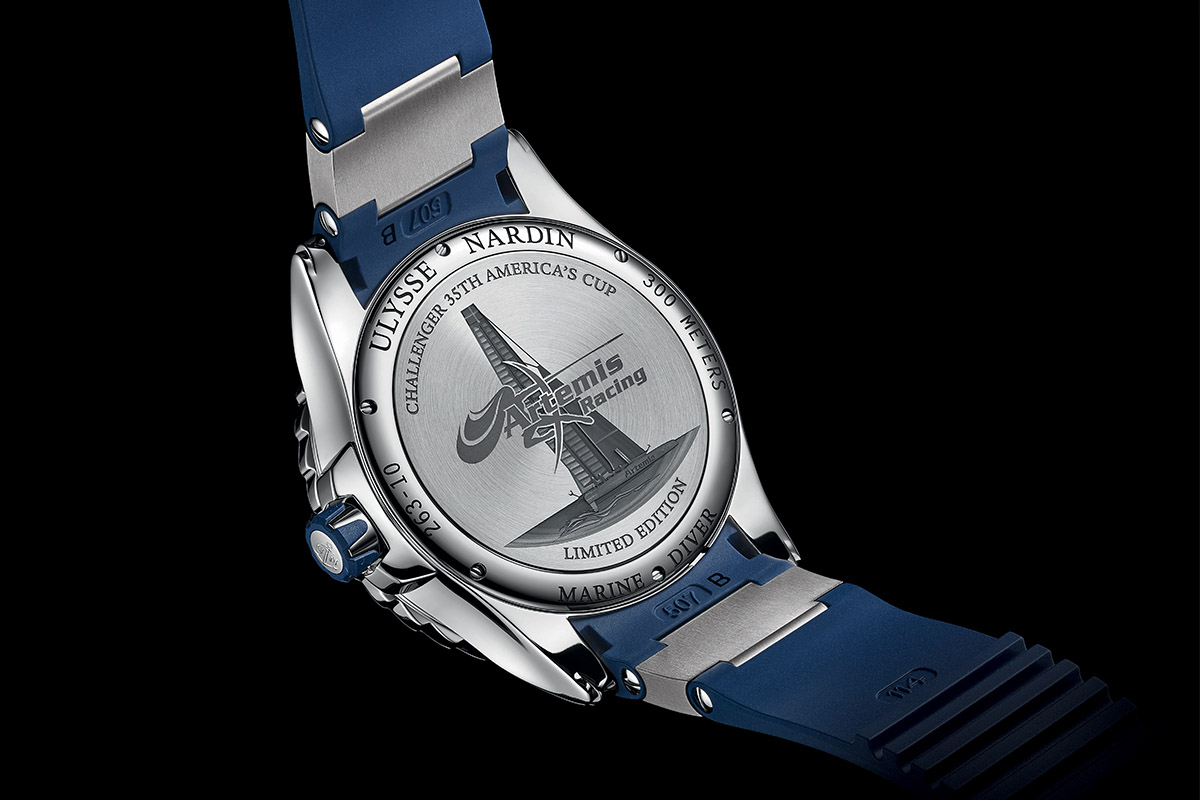 Patrik Hoffmann, CEO of Ulysse Nardin, explains what motivated him to team up with Artemis Racing: “It is an honor for Ulysse Nardin to enter into a cooperation with Artemis Racing. Ulysse Nardin’s history of navigating the sea paired with the DNA of innovation and technology, which is firmly established in both companies, makes this partnership a perfect match. When meeting the Artemis engineers, technicians, and craftsmen at their base in San Francisco, I quickly realized that the spirit of passion and innovation is the driving force behind this extraordinary team.“ 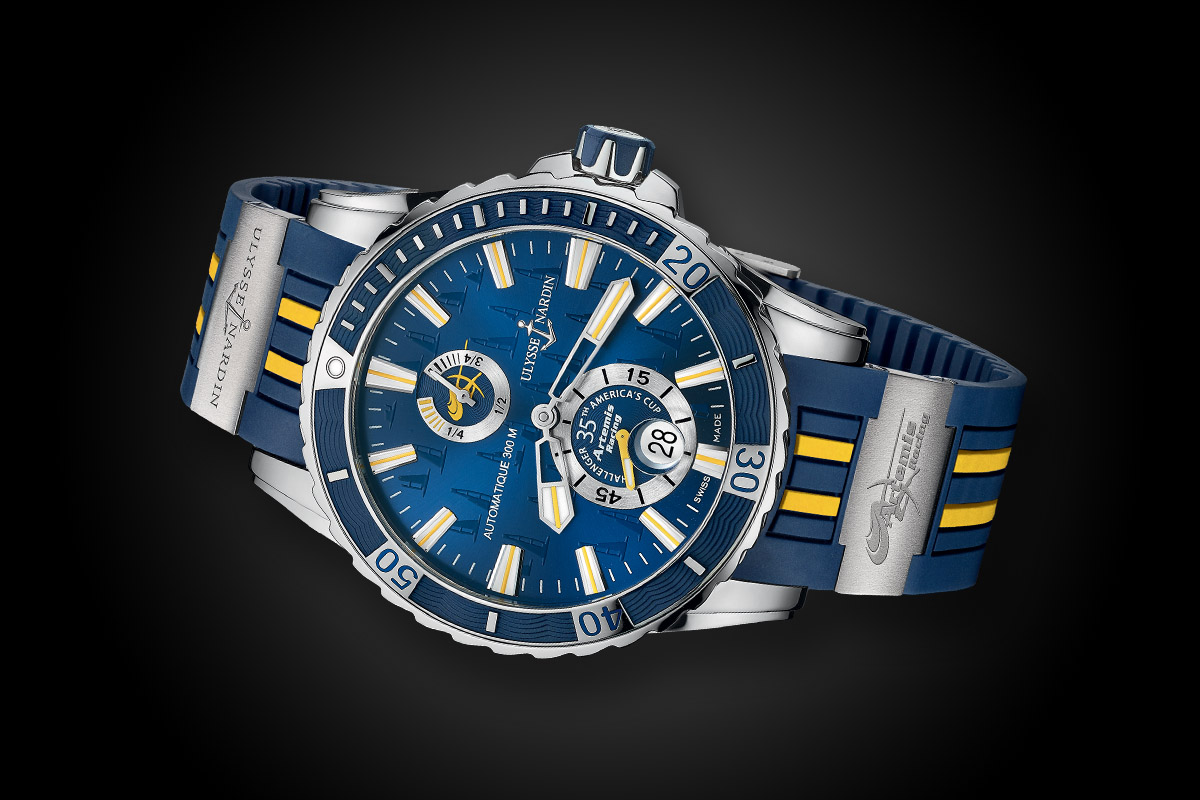 Ulysse Nardin has been a horological pioneer, leading the way with silicon escapements and introducing the world to the Freak, so the synergy of spirit between the team and the brand has its roots in mutual innovation. Add a common love for the sea, lots of bona fide talent, and the world’s oldest international sporting event, and you have the makings for only 250 limited edition watches.

Leading the Artemis Racing Team are Team Manager/Tatician Iain Percy and Team Designer Loïck Peyron. Peyron is a legend in sailing with vast experience in multihull vessels. He has crossed the Atlantic 48 times; 18 of those crossings were solo expeditions. This will be his third America’s Cup race, second with Artemis racing. He is no stranger to the nautical watch world, having collobrated with brands in the past, and his accumlated knowledge serves him well in choosing a watch as well as serving as Team Designer. 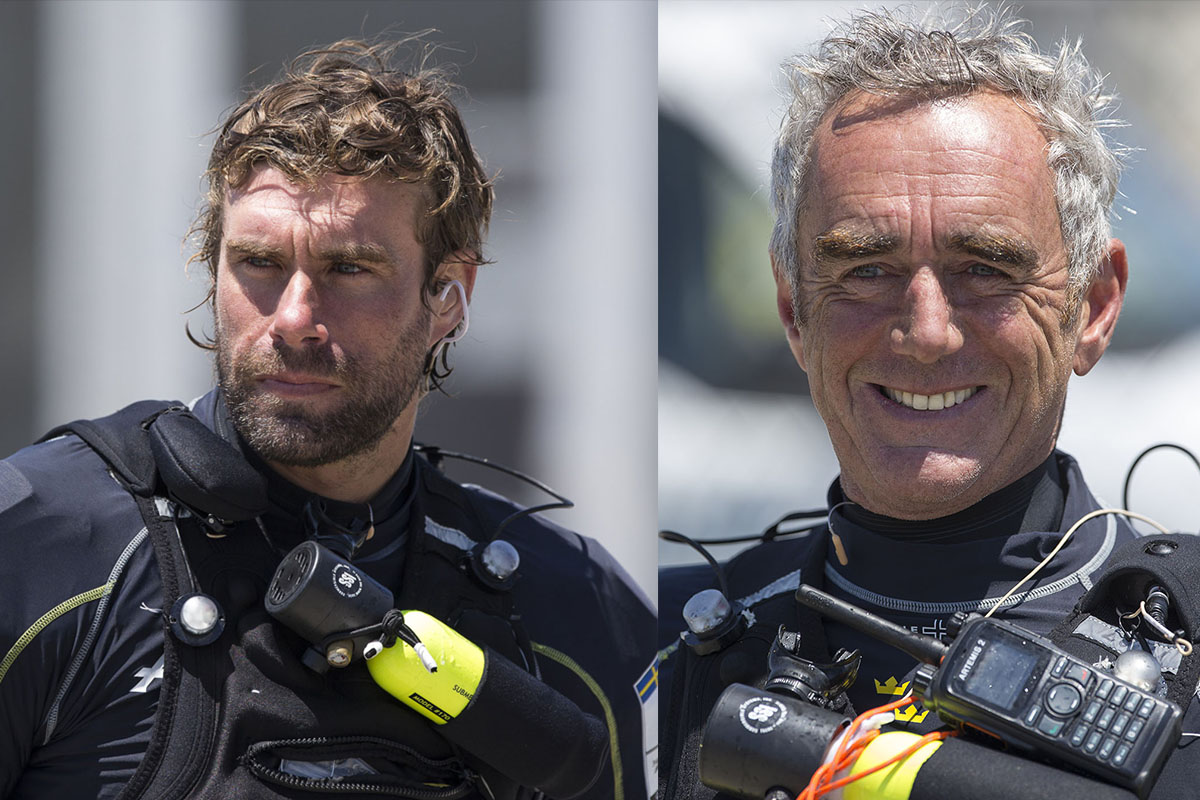 Iain Percy will be leading the efforts of the sailors around him. His Olympic penchant for collecting medals earned him gold in the 2000 Sydney Olympics, gold at the 2008 Beijing Olympics, and silver at the 2012 London Olympic games. His tactical prowess in the 34th America’s Cup elevated him to the top job, which in a sport that has no second place, means winning is his ambition. 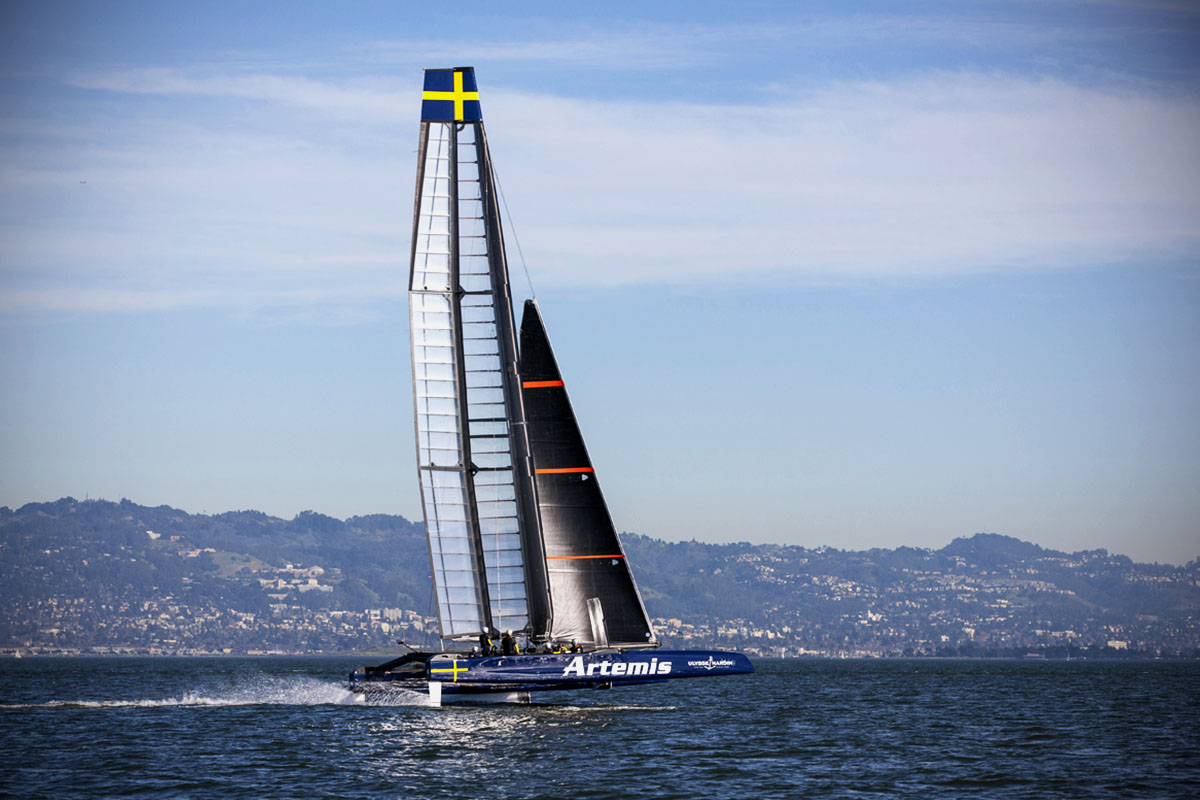 Currently the sailing teams are competing in the America’s Cup World Series (ACWS), which will culminate in the Louis Vuitton Cup, which will in turn name the challenger who will race against Oracle in the 2017 America’s Cup race. Ulysse Nardin revealed The Marine Diver Artemis Racing at the August 28-30 Gothenburg, Sweden ACWS regatta. Next up Bermuda. For more, take a look at the video below or go to ulysse-nardin.com. 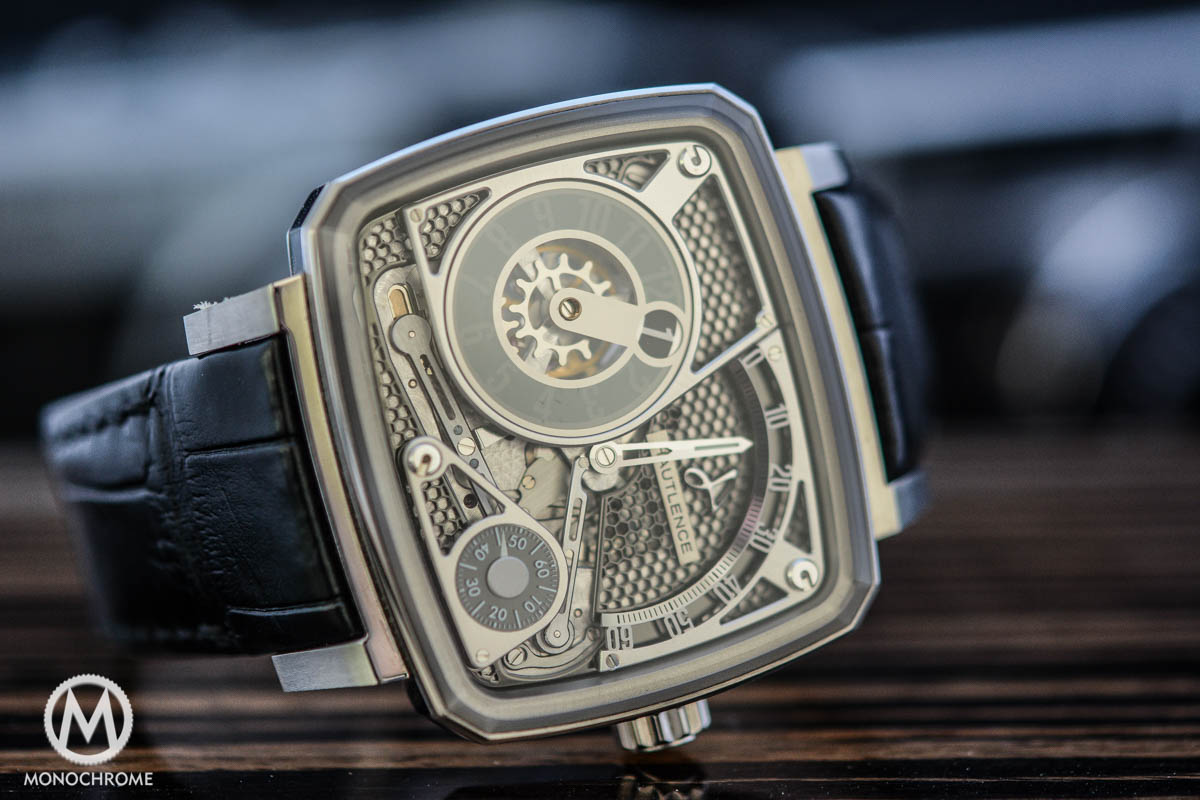