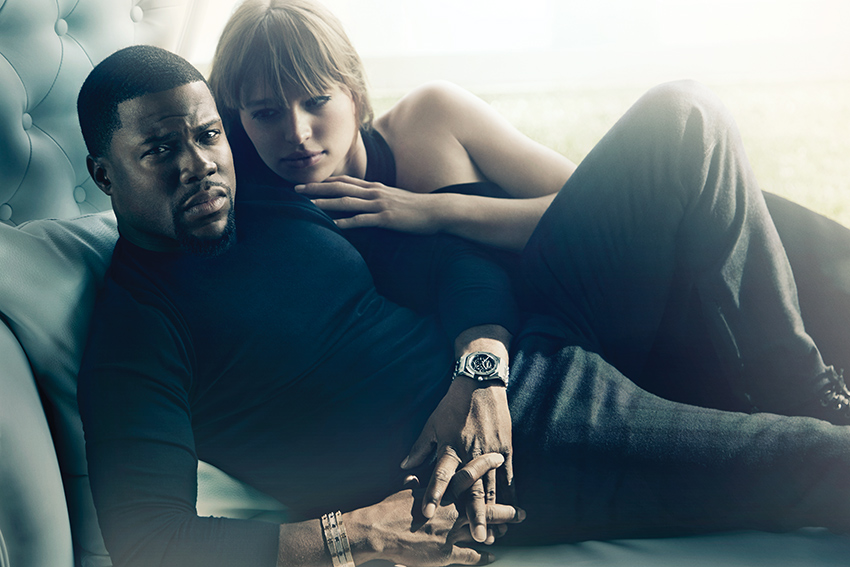 Two years after calling us out on Instagram to shoot his watch collection, we finally sat down with Kevin Hart. And we quickly found out that, when it comes to watches, this comedian doesn’t joke around. According to this self-proclaimed Daytona-head, watches say a lot about the men who collect them. So what does Kevin Hart’s collection tell us about him?

“The bonuses that come with life come after hard work,” says Kevin Hart, and in his case, those bonuses can be worn around the wrist.

For the past decade, the American comic-turned-actor has been collecting successes on stage and in theaters, treating himself to watches along the way. All of it, he says, is the product of consistent hard work.

“I’m the real deal,” says Mr. Hart. “I’m not someone who just jumps in and jumps back out.”

For the better part of 2015, he has been traveling around the world to promote Wedding Ringer, a film in which he stars as a young and successful CEO providing best man services for socially-challenged grooms.

If his life today is filled with as much success as that of his on-screen character, it wasn’t always so. Brought up by a single parent in the rough part of Philadelphia, he proudly took on his difficult childhood in the early stages of his career.

His second show, Laugh At My Pain,was a deeply-exposing performance, one that revealed his father’s drug addiction and his adverse childhood. At one point, Mr. Hart laughed about his inability to spend as much as his athlete friends.

His honesty had fans rooting for an unlikely candidate to stardom. Philadelphia’s “Lil’ Kev” would soon be playing in the big leagues, with DVDs of the show grossing more than $15 million.

Since then, Kevin Hart has morphed into a global icon, taking his comedy to the big screen with box office hits such as Think Like A Man, and signing a string of endorsement deals along the way.

“These are all things after which I’ve treated myself, either with a car, or with a watch,” says Mr. Hart.

As of late, he’s been caught striking poses around the world, flashing an impressive watch collection that hints at his new lifestyle.

Mr. Hart remains funniest when he laughs at himself, but when he calls himself a “sex symbol” today, it’s hard not to take him seriously. After all, actors with a penchant for the mechanical have made women swoon ever since Paul Newman.

And this comedian definitely has the muscle and the toys to compete. “The passion for watches has always been there,” he says, but the hobby has grown stronger and with it, the collection. “It definitely gets bigger and better.”

It’s one he shares with his fans over social media, posting pictures of his latest pieces on the wrist, which he ironically calls “disgusting.” They are far from it.

His first serious timepiece “was probably a Rolex Submariner.” Then came a stainless steel Daytona, one of his favorite watches to this day “because it’s such a hard watch to get.”

But all of his riches haven’t corrupted Mr. Hart, and his watch collection shows that he can be serious when he needs to be.

Instead of spending money to catch up to his athlete friends, he is making wise investments, picking the timepieces that will hold their value over time.

His collection spans a dozen Rolexes, five Richard Milles, as well as a couple Patek Philippe and Audemars Piguet watches.

At this point, Mr. Hart isn’t merely collecting. But he’s cautious about his spending. “I don’t like to call it an addiction because people will think that I have a problem.” He needs no reminder of the danger of addictive behavior.

Instead, he appreciates the fine expertise and patience that go into making a luxury watch. “The effort watchmakers put into making something so unique,” he says. “That’s what I love.”

Mr. Hart says he isn’t a watchmaker, nor does he intend to become one. But he knows a thing or two about crafting a joke, and he hopes to inspire others to believe in their ability.

“I’m a guy who supports people that have found not only a love, but a real talent.” In the stand-up scene, no one measures up to the 5’5” comedian, and he’s made sure of it. “In terms of watches,” he quips.

“I can’t think of any comedian that has this type of love, or shares this particular hobby,” says Mr. Hart confidently. “I’m in a lane by myself.”

Instead, he rolls with Jay-Z, Kobe Bryant and Carmelo Anthony. “That’s where a lot of the education came from,” he explains.

His obsession with watches has begun to transition on screen. The Rolex Sea-Dweller that appears on the poster of Wedding Ringer wasn’t part of the script.

“That’s mine!” jokes Mr. Hart, who explains he wore his own watch throughout the shooting of the film since it seemed like an appropriate watch for a young CEO to have.

This isn’t the first time an actor has worn a personal piece on the cover poster of an international film. In the 1980s, Paul Newman appeared in a photo promoting the film Winning, wearing a Rolex Cosmograph Daytona Ref. 6239 given to him by his wife Joanne Woodward.

Enamored by the sight of the legendary actor, Italian retailers began including his name in sales catalogues to describe an unusual and particularly beautiful type of Rolex “Paul Newman” Daytona. Could Kevin Hart follow in the path of the man who lent his name to his favorite model?

“To have something that’s your model, that’s the honor of all honors to me. I don’t plan on stopping doing what I’m doing any time soon,” he says.

Mr. Hart shows no intention of slowing down and is already back on tour, promoting Get Hard, a comedy with fellow comedian Will Ferrell that hits theaters on March 27th in the United States and Canada.

“The pairing is a no-brainer. It’s beyond funny. I’m just as excited about it coming out because I’ve seen it twice already and the reaction has been amazing.”

Meanwhile, he is also planning a return to stand-up in April. His next show, the What Now? Tour, is already sold out in nearly 20 U.S. markets. Surely that means it’s time for another treat.