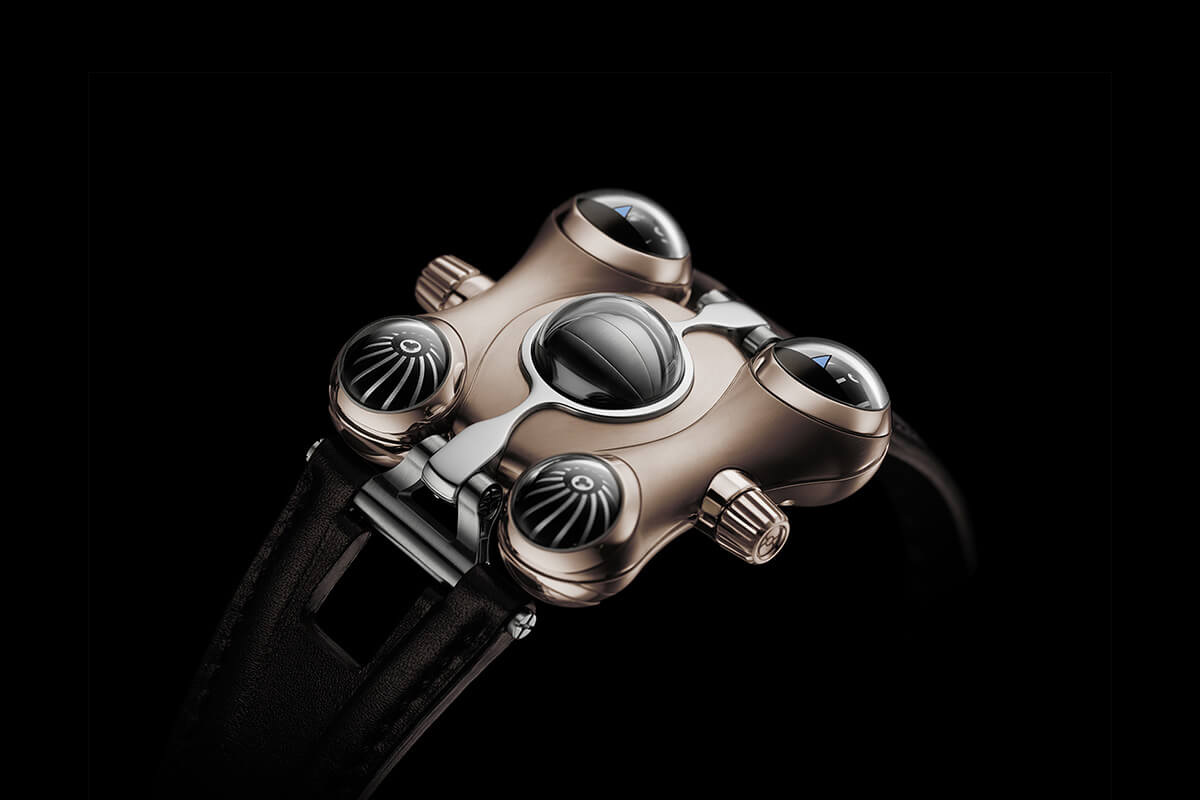 The HM6 is, to date, the most complicated and crazy (both technically and visually) MB&F ever. When we reviewed it end of last year, we couldn’t resist to say that this Space Pirate was a strange object. However, after a few months, it seems that this strangeness tends to disappear and that the inspirations become clearly obvious – and really bold (something confirmed as MB&F just won the Red Dot: Best of the Best Award). After the first and cold edition made of titanium, it’s now time for MB&F to introduce a warmer, more luxurious edition in Red Gold (and not any alloy to be precise). 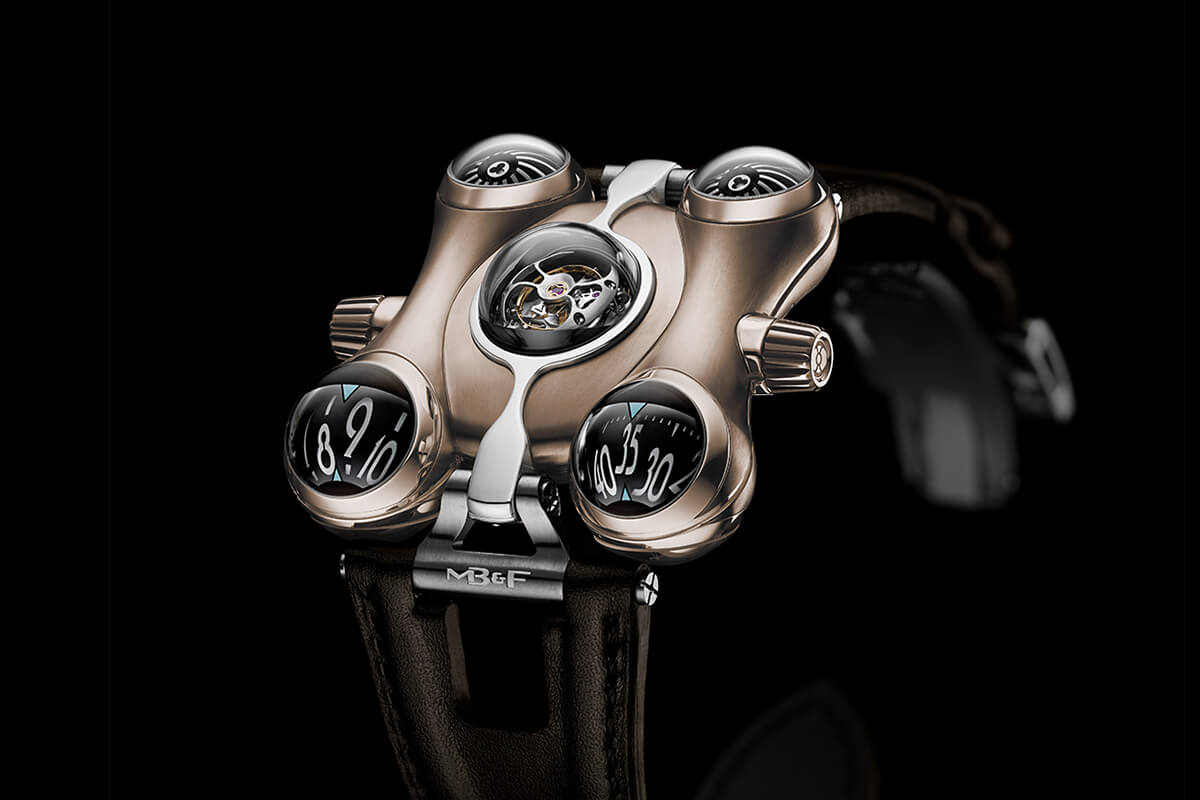 On this RT edition of the HM6 Space Pirate, MB&F replaces titanium by a specific gold alloy called 5N+ (in this case, the + makes all the difference and 5N is the actual name for any red gold alloy). Just like some brands like Rolex (with the Everose gold) or Omega (with the Sedna gold), MB&F comes with their own gold that includes Palladium in order to stabilize the cooper that is used in any red gold alloy (and that gives this reddish colour). However, cooper is not stable and tend to wear and to age, meaning that within the years, any red gold alloy will loose its red colour to become yellowish. 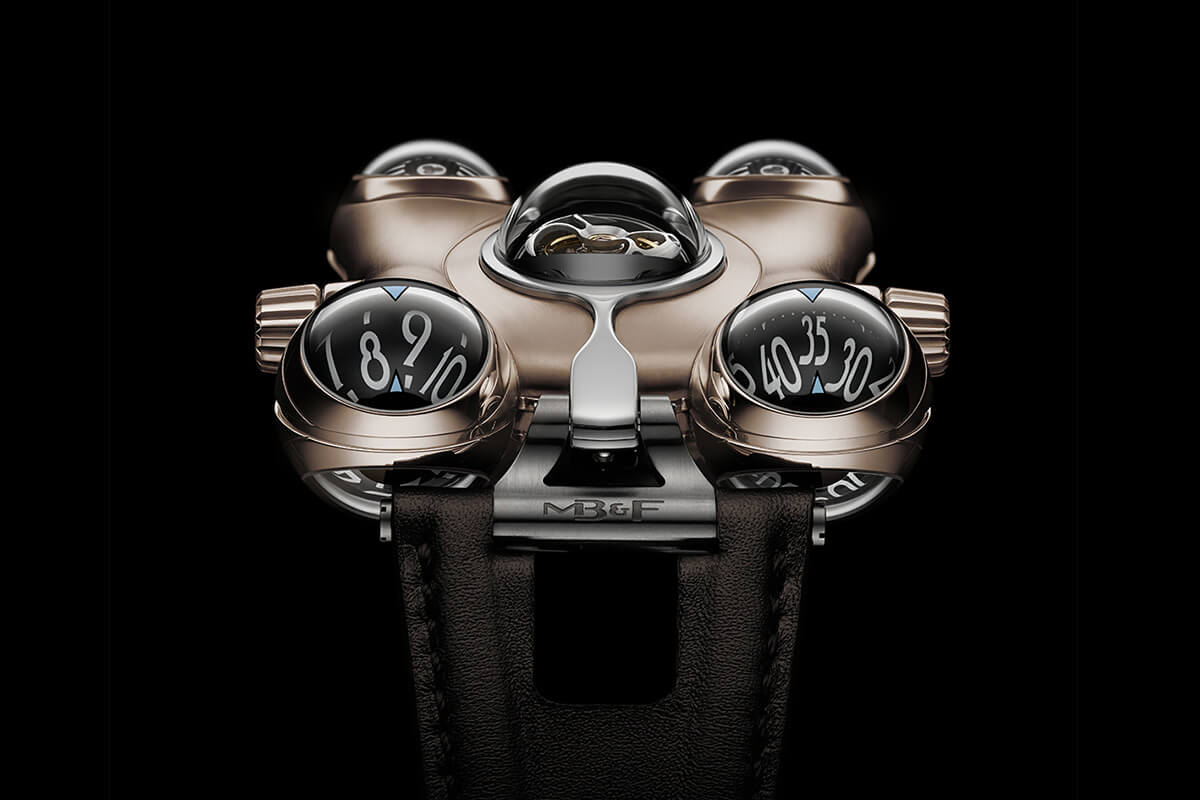 The result on the MB&F HM6 RT Space Pirate seems to be an alloy that doesn’t looks like ostentatious and shiny. The red colour is instead warm and relatively soft, something that the satined finish is for sure emphasizing – this impression has to be confirmed however during a hands-on report. For the rest, we encourage you to have a look at our extensive review of the older edition of the MB&F HM6 Space Pirate in titanium as both the design and the technical specifications are identical. Titanium is not fully absent from this RT 5N+ edition as for instance the central band that goes all around the case or the lugs attachments are still coming in this non-precious but light material. 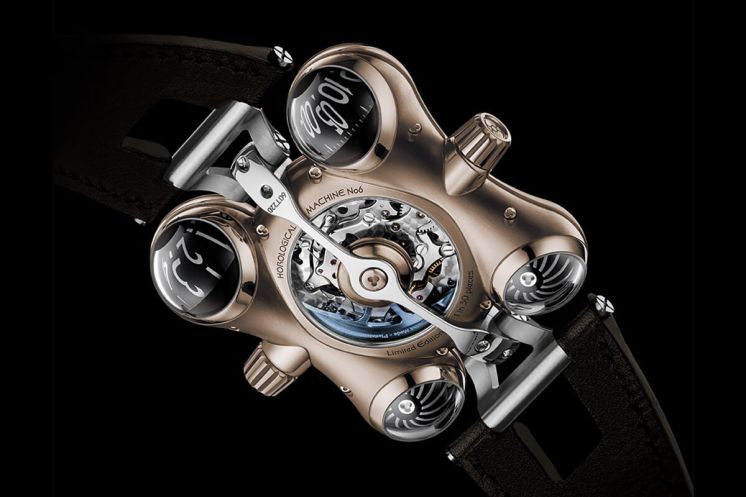 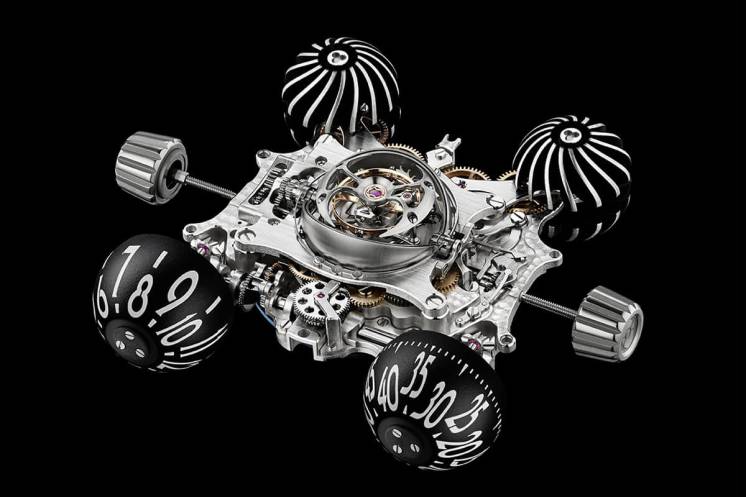 As a reminder, be aware that the HM6 is the most complicated MB&F to date (that’s for sure) and certainly the bolder one (something that remains debatable when having a look at the also crazy MB&F HM4 Razzle Dazzle). It takes inspiration from the famous 1970s cartoon ‘Captain Future‘ or ‘Captain Flam’ and mimics the spaceship of this TV show by using sapphire spheres linked together by a central ‘tube‘ or ‘fuselage‘. All together it creates a unique and highly complicated case, that features no less than 9 spherical crystals (plus another one on the caseback). Time is displayed by rotating bubbles on the front, one displaying the minutes and the other one indicating the hours. 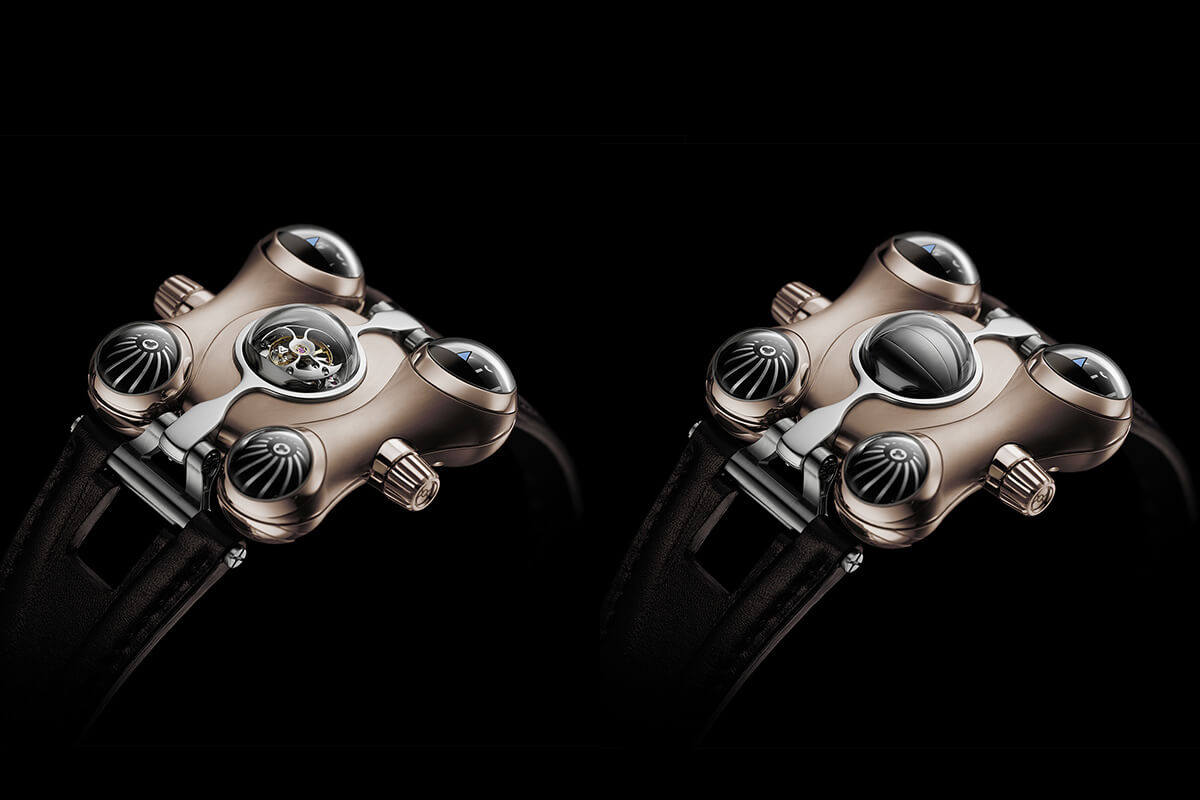 One the top, the MB&F HM6 RT exhibits its regulating organ though another domed sapphire. The Flying tourbillon can be shown or hidden by actuating a crown at 9 and a retractable spherical shield that envelopes the tourbillon with six overlapping, curved blades. The automatic movement ticks at 18,000bph (2.5Hz), boasts 72 hours of power reserve and is composed of 475 pieces. It had been created exclusively for MB&F and required 3 years of development. Finally, two spherical turbines – composed each of 15 curved vans, machined in solid aluminum blocks – are used to regulate the winding efficiency.

While the titanium edition was limited to 50 pieces, this new MB&F HM6 RT Space Pirate in Red Gold will be produced in 18 pieces (knowing that the goal is to produce 100 pieces of the HM6). It will be priced at CHF 220.000 (before taxes). More details on mbandf.com.