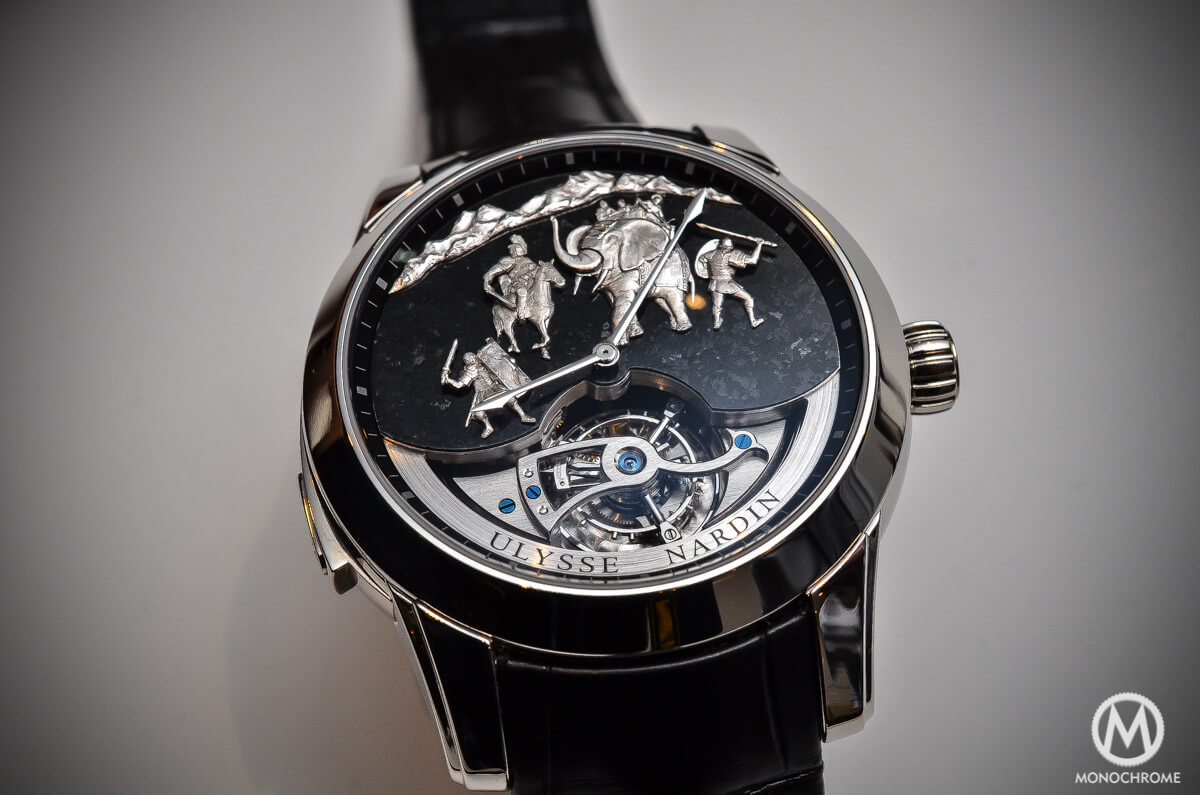 We’ll get directly to the main disadvantage of this sort of ultra-complicated watches. It will cost you an arm, your house and two kidneys. As you can expect, the Ulysse Nardin Hannibal Minute Repeater Tourbillon is an extremely exclusive watch that is priced at 725.000 Swiss Francs and limited to 30 pieces. However, there are good reasons to this price, including a very complicated movement and the use of multiple rare and painstaking techniques.

A usual minute repeater (as long as a minute repeater can be called ‘usual’) is composed of two chimes – stainless steel circles that are especially formed by hand to obtain a certain music note, after a long and precise tuning process – and two hammers that strike the chimes, thus creating a sound. Because of this construction, a usual minute repeater will produce two music notes – one high and one low. Commonly, the higher note sounds the minutes and the lower note sounds the hours. The quarters are combining these two notes. 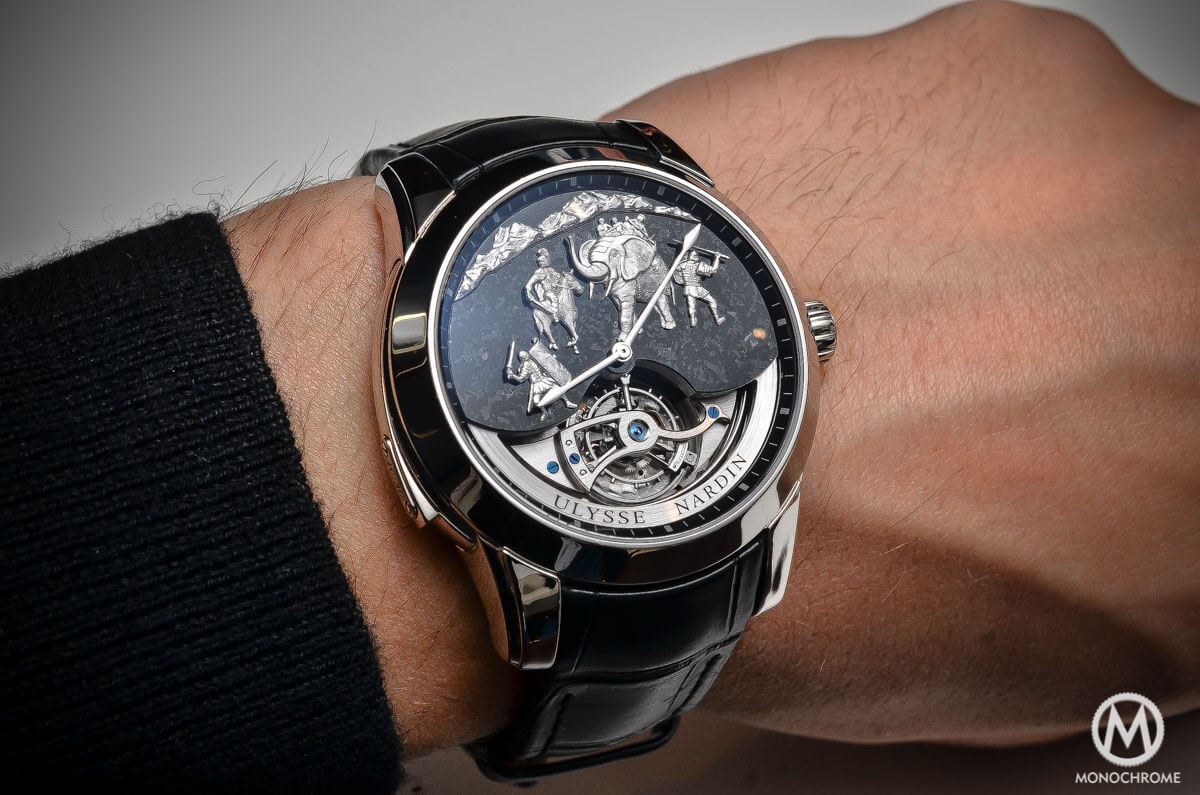 A Westminster Minute Repeater found its name from the Abbey of Westminster, London, where the time is stroke by Big Ben with a specific 4-note melody. To obtain this melody in a watch, it requires to have 4 chimes and 4 gongs. The Ulysse Nardin Hannibal Minute Repeater plays the E, the C, the D and the G. When sounding out the time, the lowest (G) of the four pitches tolls the hours and the highest (E) tolls the minutes. For the quarters, you’ll enjoy a superb sequence of the 4 notes – E-C-D-G (1st quarter), or E-C-D-G/G-D-E-C (2nd quarter), or finally E-C-D-G/G-D-E-C/E-C-D-G (3rd quarter).

This video will help you to understand this musical sequence better than words. Also imagine how complicated the movement is. First, it requires a very long adjustment of the 4 chimes and gongs. Then, the mechanism that reads the time and that actuates the gongs is much, much more complicated. The video also gives you a view on the second complication of the Ulysse Nardin Hannibal Minute Repeater: automatons called jaquemarts. 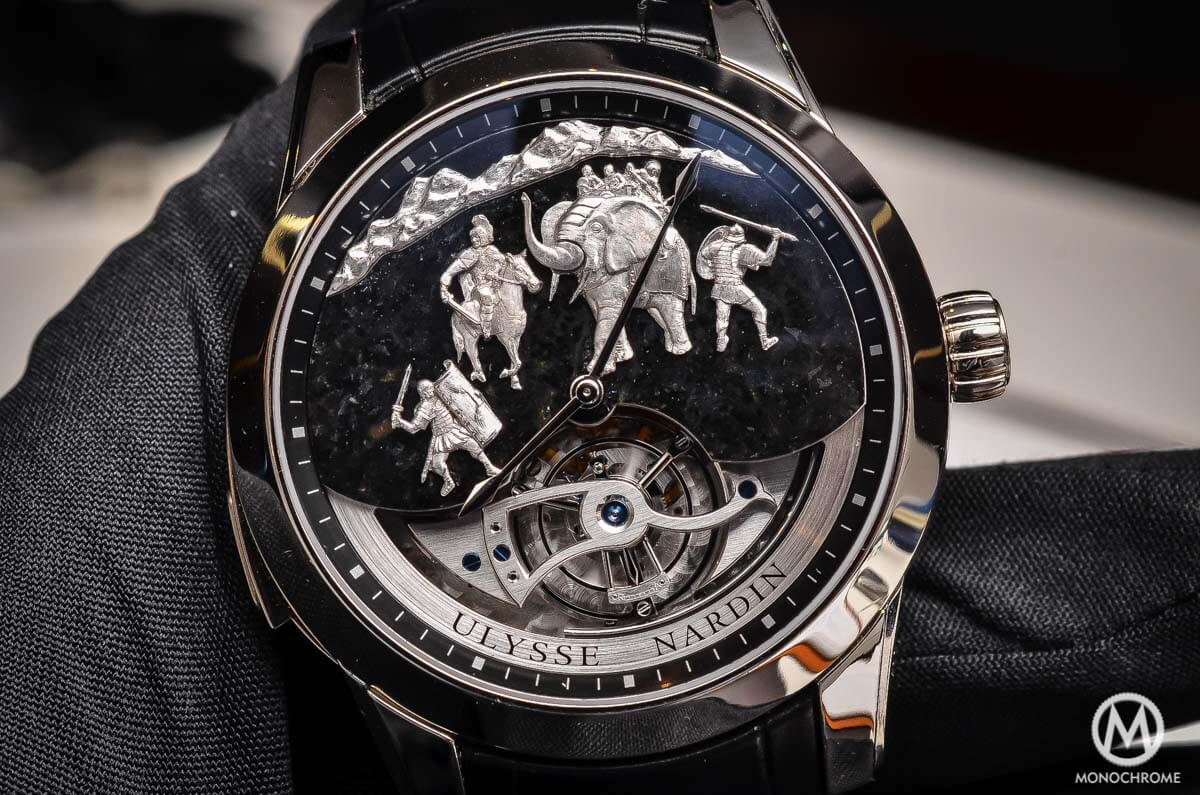 What you can easily spot is the engraving work done on the small characters depicted on the dial. What you also have to note is that these characters are animated and are moving together with the minute repeater. In watchmaking, these are called Jaquemarts or bell-striker. It is an automaton, a mechanised figure of a person, which strikes the hours on a bell with a hammer. Here, of course these figures are not properly striking the time on gongs or bells. However, they are moving consistently with the notes played. The middle left one moves together with the striking of the hours, the right one moves when the minutes are stroke and the four of them are animated during the 4-note sequence of the quarters.

This is again a highly complicated mechanism that requires multiple gears and levers, that have to be synchronized with the chiming complication.

Behind the sapphire caseback sits the Calibre UN-78. This movement comes of course, as we mentioned, with a Westminster minute repeater and automatons on the dial. However, it features other delicacies, such a one-minute tourbillon at 6, visible from the front. The association of all these complications is totally amazing. This movement boasts 70 hours of power reserve. 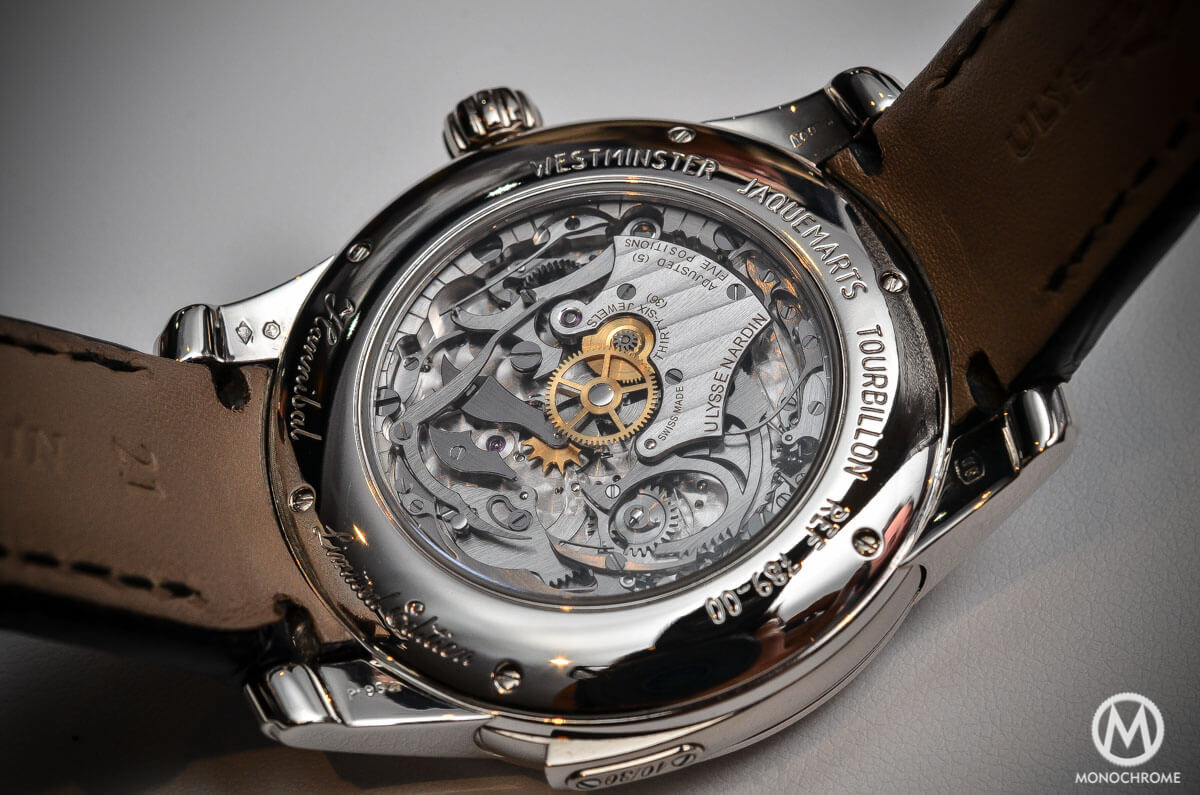 Through the case back, we can discover all the gears and levers that actuate the minute repeater mechanism. Every component is finished by hand with haute-horlogerie standards, meaning polished bevelled angles, straight-grained surfaces for the steel parts, circular graining on the main plate and Geneva Stripes on the top bridge. The bridge that holds the tourbillon is also hand finished with inward angles and straight graining.

The design of the Ulysse Nardin Hannibal Minute Repeater Tourbillon

The Ulysse Nardin Hannibal comes with a 44m platinum case, with a very classical shape – the attractions are clearly the dial and the complications here. More original is the material used for the dial. The top plate of the dial is made of a thin slice of genuine granite that was sourced in the Alps. We can see here a reference to Hannibal, as the Alps where the mountain chain he and his brigade crossed in the third century B.C., in his quest to take Rome during the Second Punic War. He crossed the Pyrenees and Alps with an army of soldiers and his secret weapon – elephants, taking triumphant victory in Italy.

This scene is depicted on the dial with 4 characters, including one of his elephants and a mountain scenery in the background. These applied figures are crafted from 18k white gold and then engraved by hand. 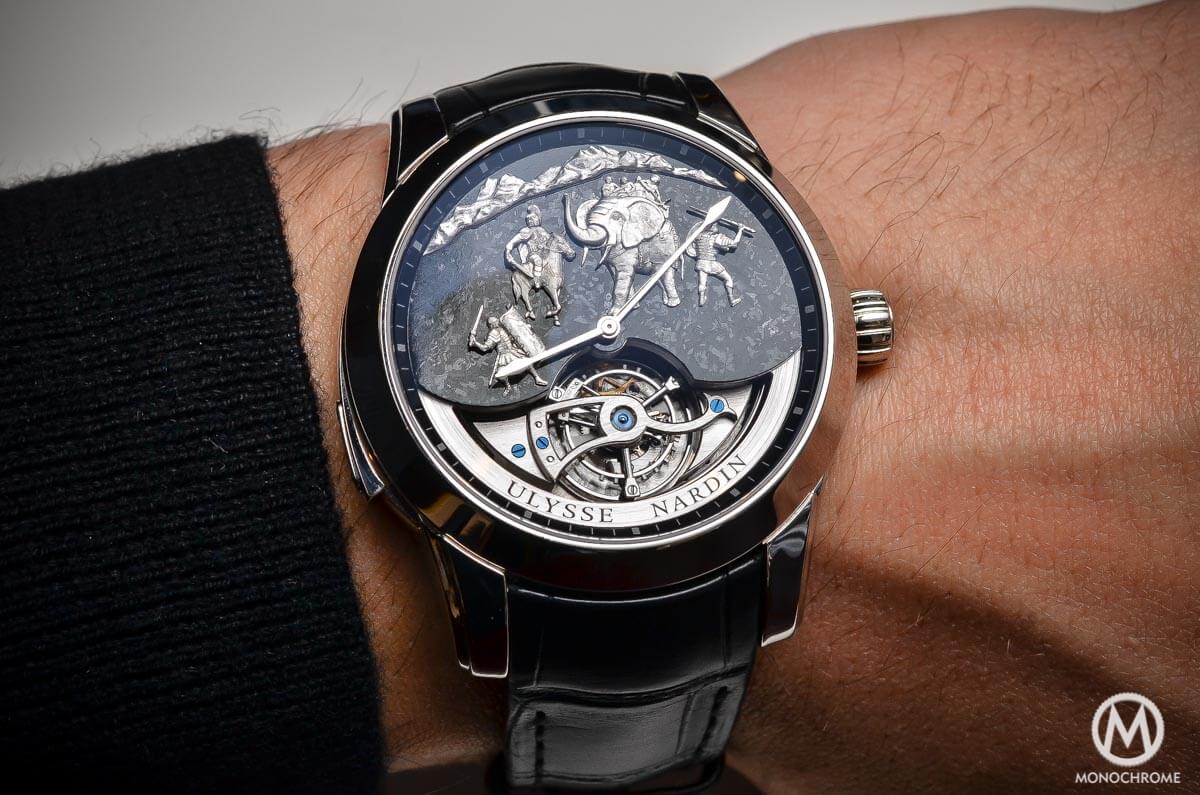 This watch clearly demonstrates the power of Ulysse Nardin as a haute-horlogerie manufacture. The combination of such a complicated minute repeater, automatons and the métiers d’art techniques used on the dial are rare, exclusive and highly fascinating. The Ulysse Nardin Hannibal Minute Repeater Tourbillon is a dream watch, a fact confirmed by its price and its limitation. More details on Ulysse Nardin Official.