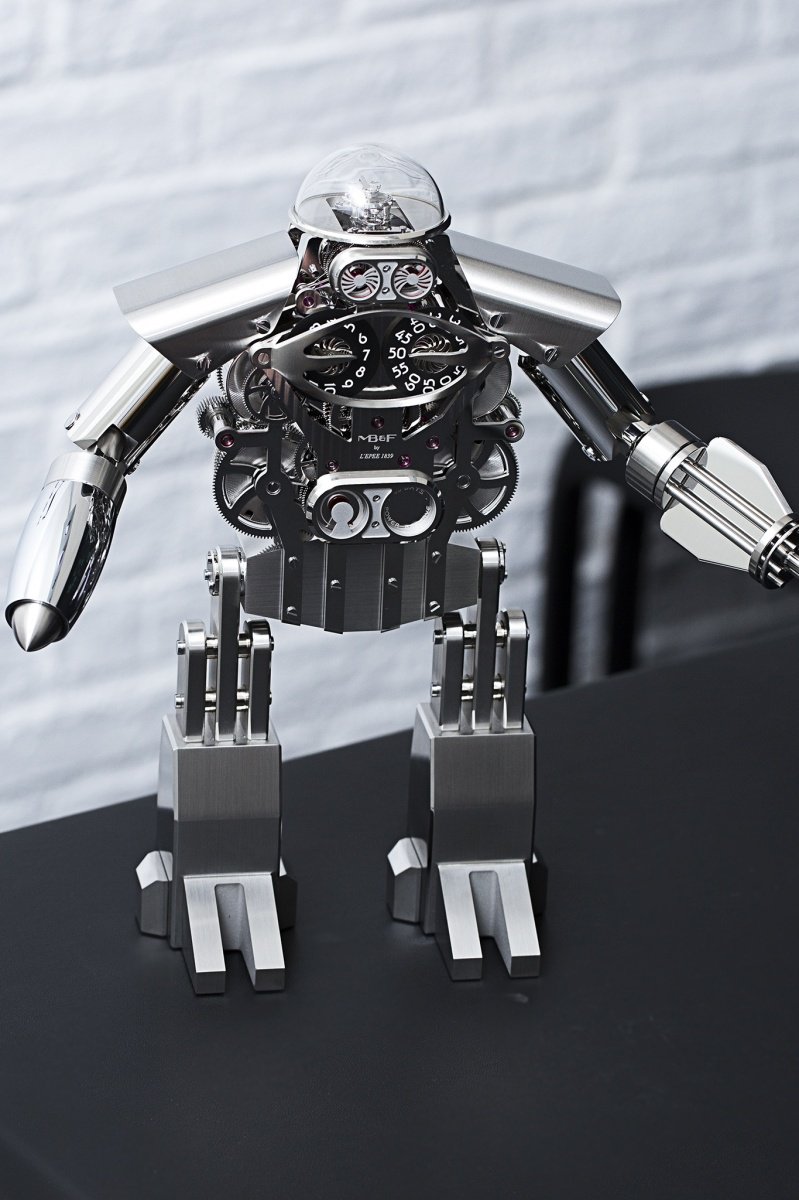 2015 marks the 10th anniversary of MB&F, quite a milestone for a niche horological lab, especially one that doesn’t conform to the usual rules of the industry. Under the guidance of founder Maximilian Büsser, MB&F has grown from strength to strength, both as a watch brand and as the father of strange and beautiful pieces. 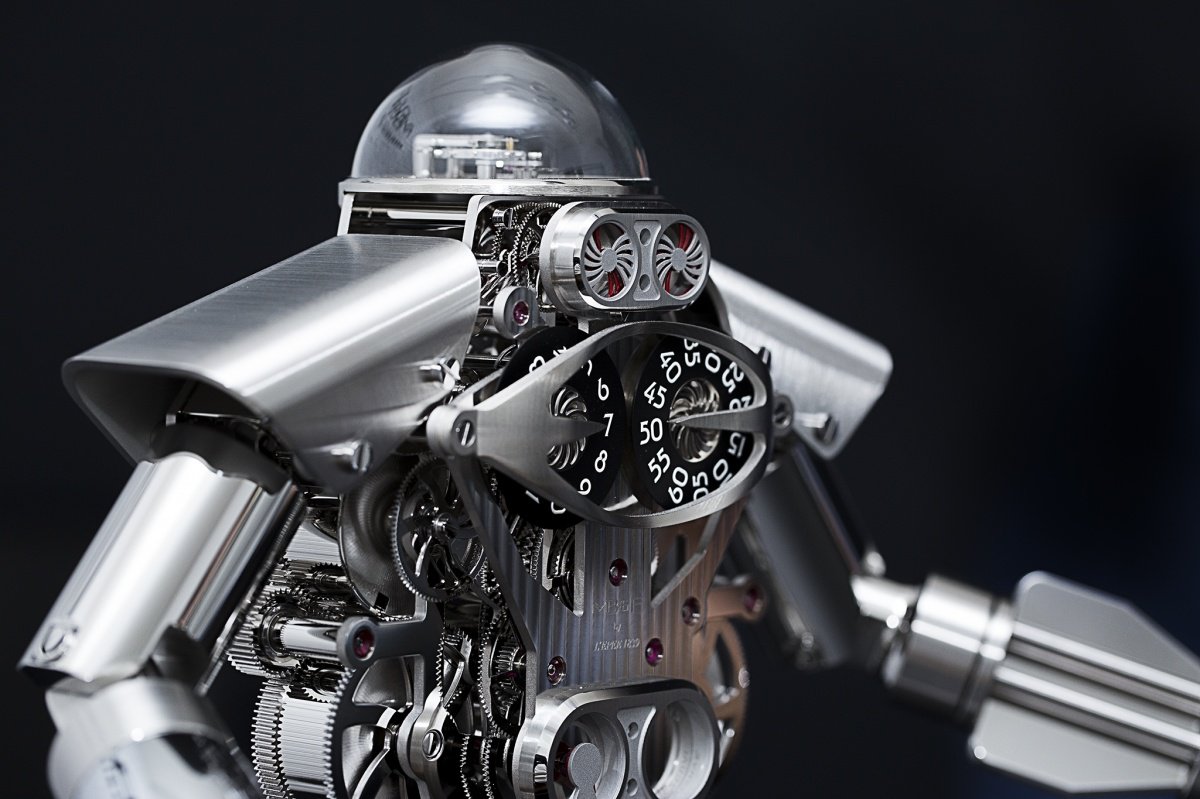 And MB&F’s latest child is Melchior, a kinetic robot made in conjunction with L’Epée 1839, a clock manufacturer with whom MB&F already worked with in 2014 on its Starfleet Machine. A 480-component mechanical table clock standing 30.3 cm tall and weighing 6.3 kg, Melchior brings out the inner child and, despite his heart of steel, provokes a smile in anyone he encounters.

“A long time ago in a galaxy far, far away, man’s best friend was his robot,” says Büsser. “As a 10-year-old fan of Star Wars, I knew Luke Skywalker could never have prevailed had it not been for droids like R2-D2 – a loyal, resourceful and brave robot who was always saving his friends. As an only child, I imagined having my own robot companion. Melchior makes that childhood fantasy a reality.” 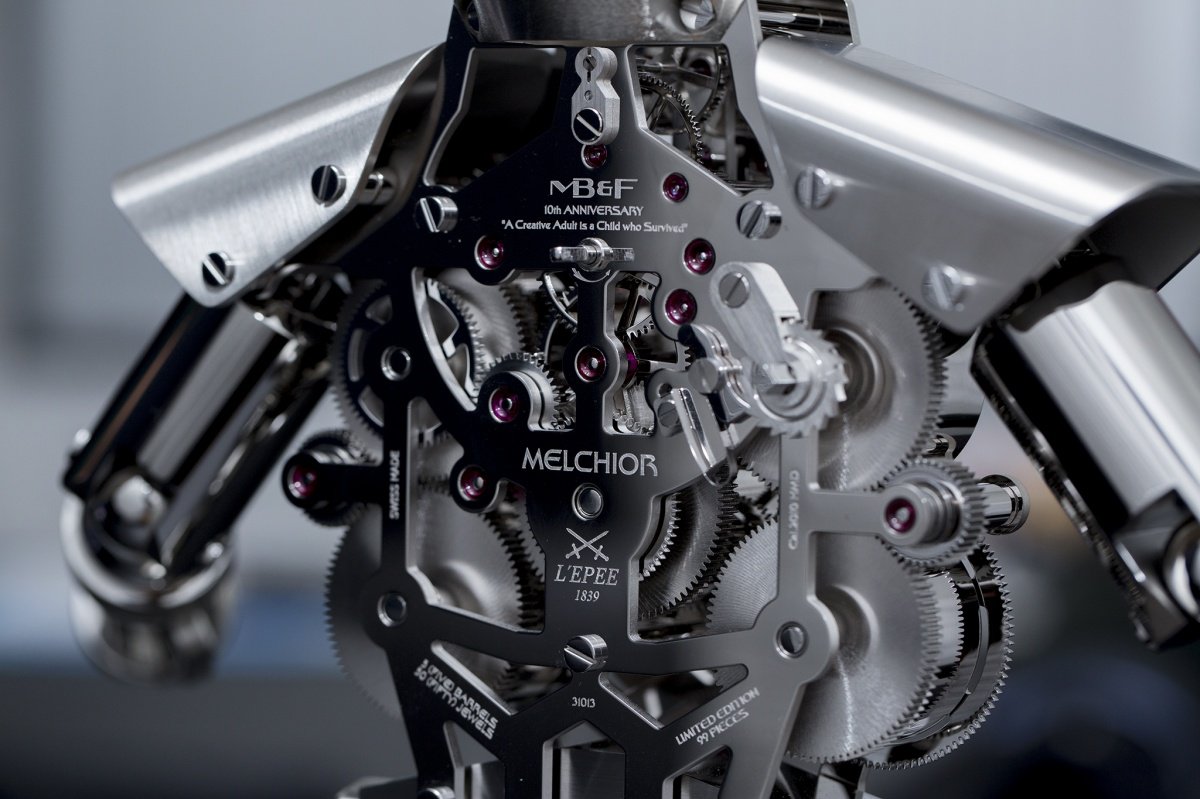 But Melchior is more than a companion. He is family. His name is one that has been passed down from one Büsser to the next for more than 500 years until Max’s grandfather put an end to the tradition by calling his son Mario. Finally, Max revives this family tradition by giving birth to the latest Melchior and the name suits this little guy down to the ground. 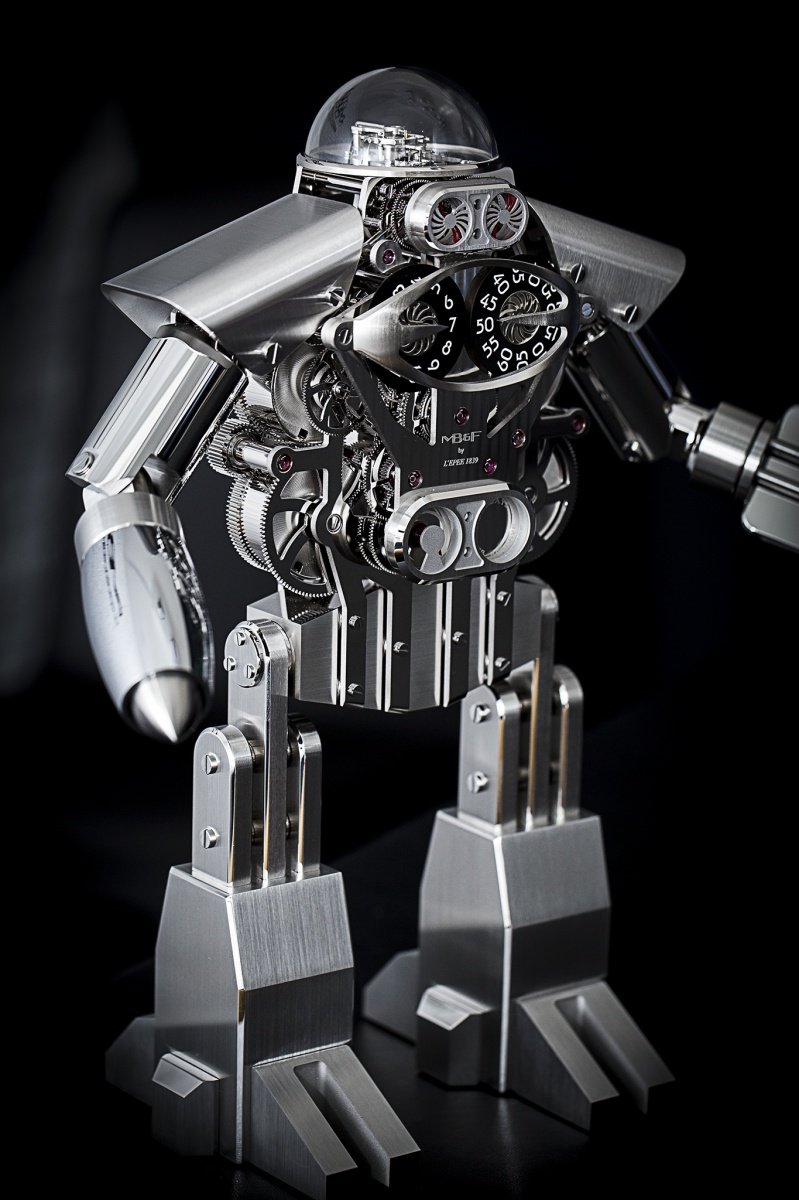 Melchior sure has a lot of personality in his little frame. His body is composed of several moving parts including jumping hours and sweeping minutes while a third dial in the abdomen provides information on his remaining energy.

Even his face lights up. Two flyback discs for eyes blink at a 20-second interval behind a steel mask, while his brain ticks under a sapphire dome on the head protecting his beating balance wheel. He may be made out of brass and steal, but this stone cold robot packs a lot of personality. 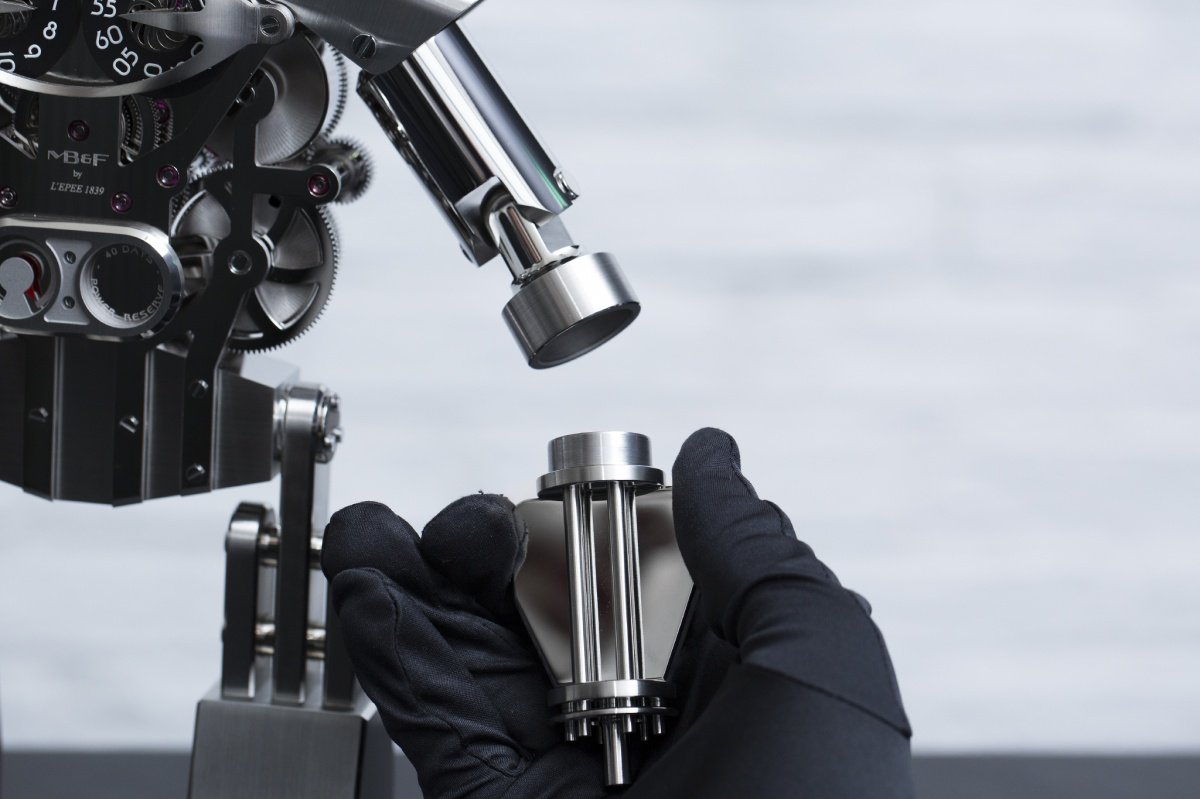 But beware of his darker side. With a rocket launcher for his right arm and a Gatling gun for the left which detaches and doubles as the winding and time setting key, Melchior is ready to keep your desk top safe and secure in case the bad guys come to visit. 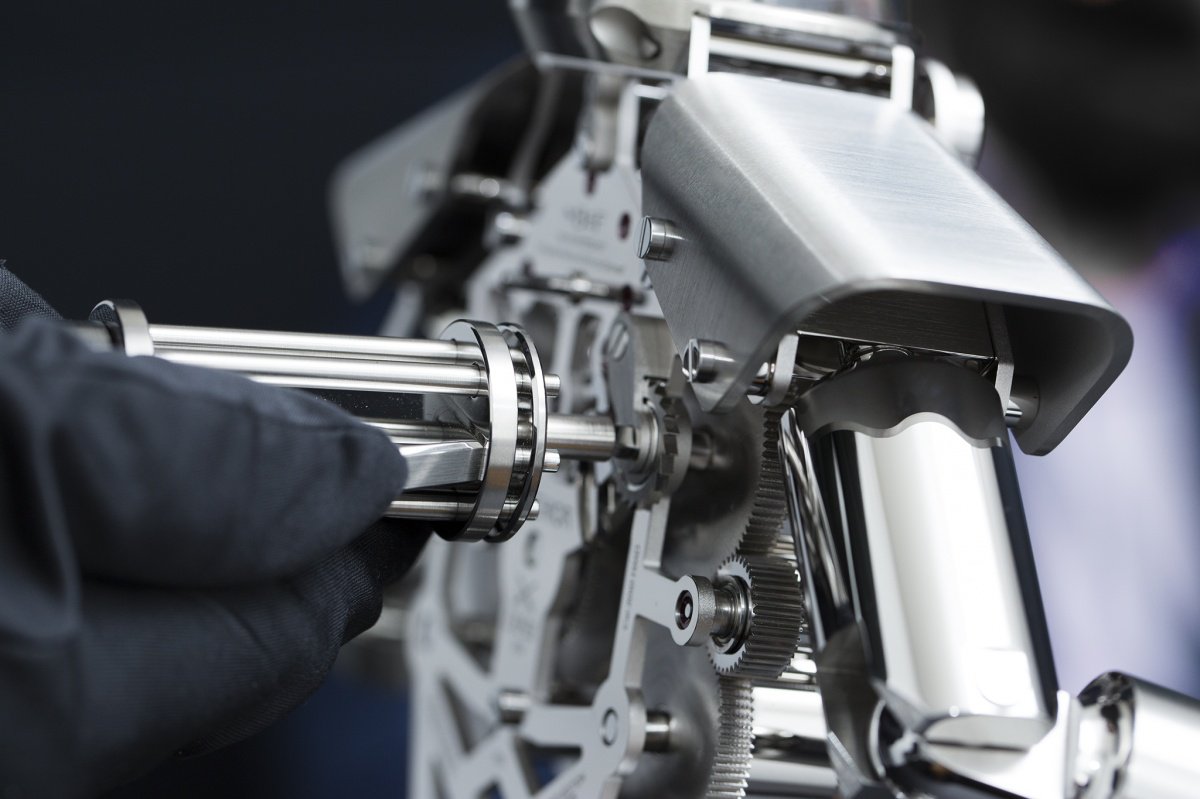 Available in either light or dark (PVD) versions limited to 99 pieces, Melchior is the first of a number of anniversary pieces released for the 10th anniversary of MB&F year under the project title “A creative adult is a child who survived.”