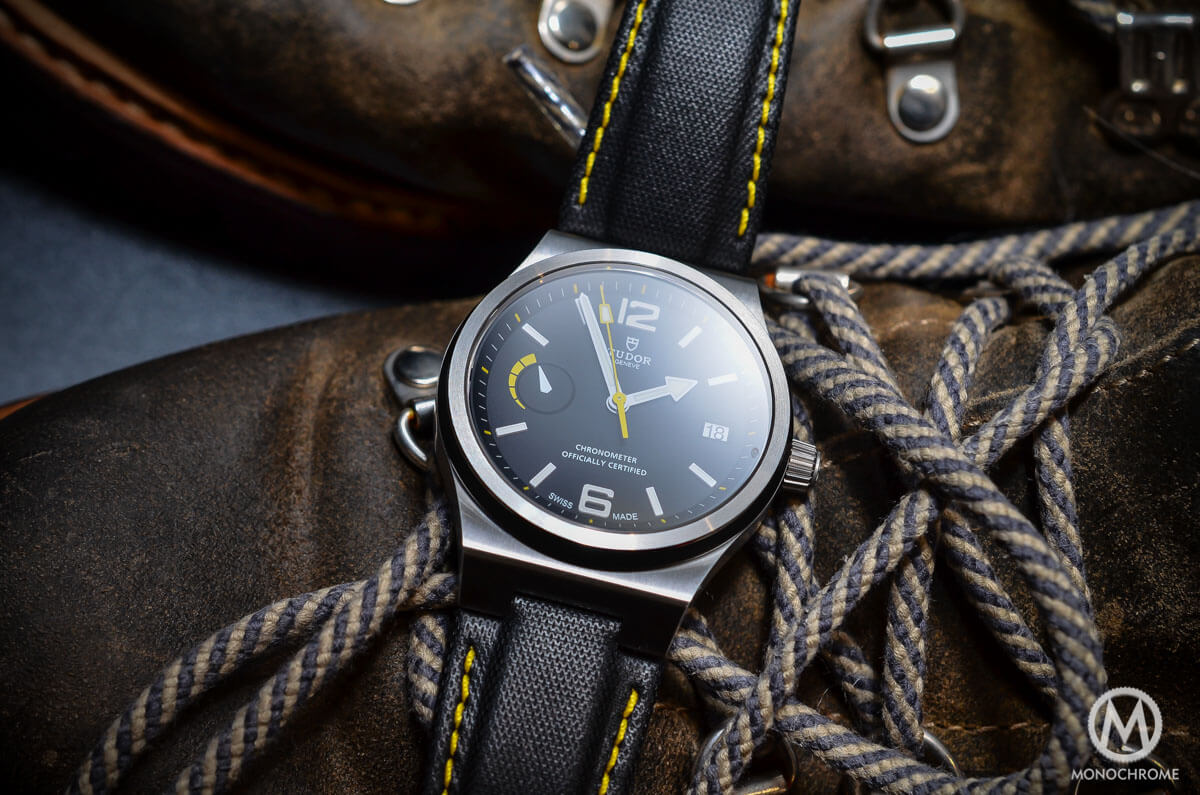 You’ve probably seen this one all around the internet, right after its introduction during Baselworld 2015. Clearly, the Tudor North Flag was one of the main novelties for the Rolex / Tudor Group but we chose to wait before discussing it. Why? The reason is simple: this watch is important as it represents a real turning point for the brand (new movement, new design) that with this watch underlines its independence from big brother Rolex. Here are our thoughts on this very important timepiece, the new Tudor North Flag.

If you are returning readers of our online magazine, we guess that your have a more than average interest in watches and you already have your own opinion about the new Tudor North Flag. Its design may not be the only point of discussion. The stakes behind it are bigger than just introducing a newly designed watch and/or a new style for the Tudor collection. Tudor was and still is part of Rolex. However, as we mentioned, the North Flag is a turning point in the history of Tudor. We can see it as the Declaration of Independence that Tudor sends to Rolex – or is it a move from Rolex for Tudor not to cannibalize the sales of the Submariner… Good question that only the head under the crown could answer. The point of our opinion article is not bring the answer to the reasons why, but instead to look at the results and what we should think about this move – but let’s first have a closer look at the Tudor North Flag.

The Tudor North Flag in detail 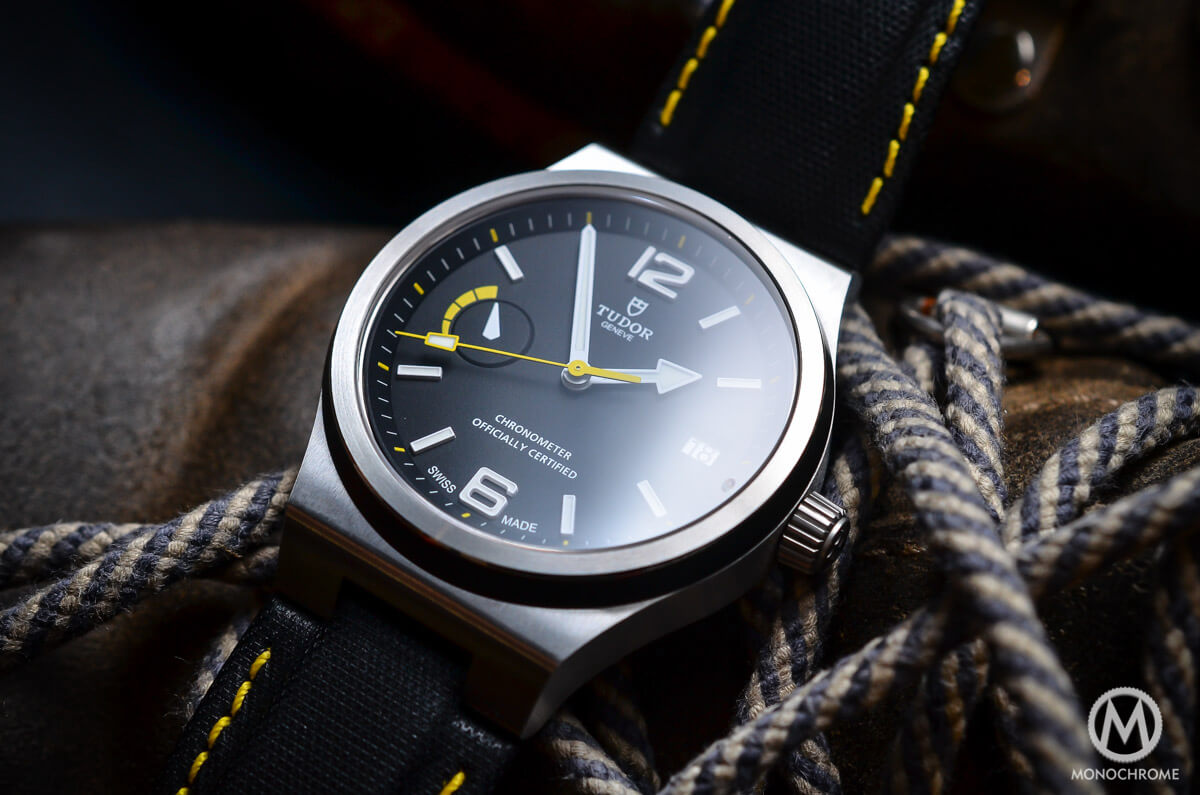 For several years, Tudor played ‘the vintage card’ with modern interpretations and re-issues of classics from their old and collectible models, like the blue Submariner for the French marine, engraved with M.N. for Marine Nationale (one that clearly was the inspiration of the new Pelagos Blue), the Snow Flake hands of several of Tudor’s vintage Submariners (that are present in the modern Black Bay), the vintage Tudor Ranger (re-issued last year) or the Monte Carlo Chronograph (also re-issued as the Tudor Heritage Chrono Blue). No need to go further, Tudor played on this trend for 3 / 4 years and with success. When we first saw the North Flag, we thought it was a brand new design, modern and exclusive, but this is not entirely the case as it finds a bit of its inspiration in the (almost) unknown Tudor Ranger II (photo here). However, the truth is simple, this watch is totally different from the rest of the collection that could have been seen as vintage inspired Rolex timepieces stamped with another logo. The North Flag can’t be seen anymore as a Rolex and the design clearly stands for a unique DNA. 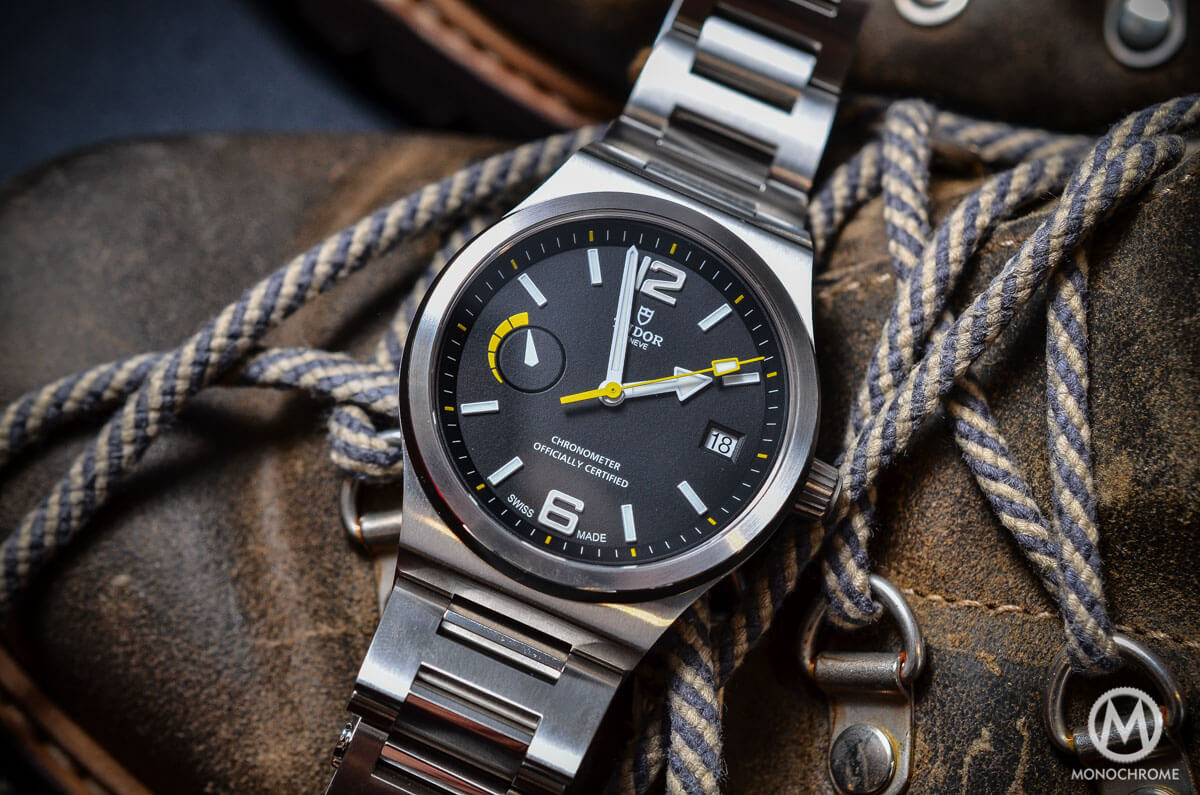 The 40mm satin-finished stainless case has a modern approach with integrated lugs (something that will make it difficult for collectors to play with aftermarket straps) and a massive mono-bloc shape. Even if some 1970’s clues can be found here (a bit of Gerald Genta style, reminiscent of for instance the IWC Ingenieur), the North Flag looks and feels 21st century. So does its construction with a double bezel made of a matt black ceramic ring and a satin finished stainless steel ring on top. It’s without a doubt a modern and solid watch that can be called a tool watch. The dial also has a matching style, with bright yellow accents – on the second hand, the minute track and the power reserve indicator – creating a great contrast with the matte black dial and the large luminous white numbers / indexes / hands. 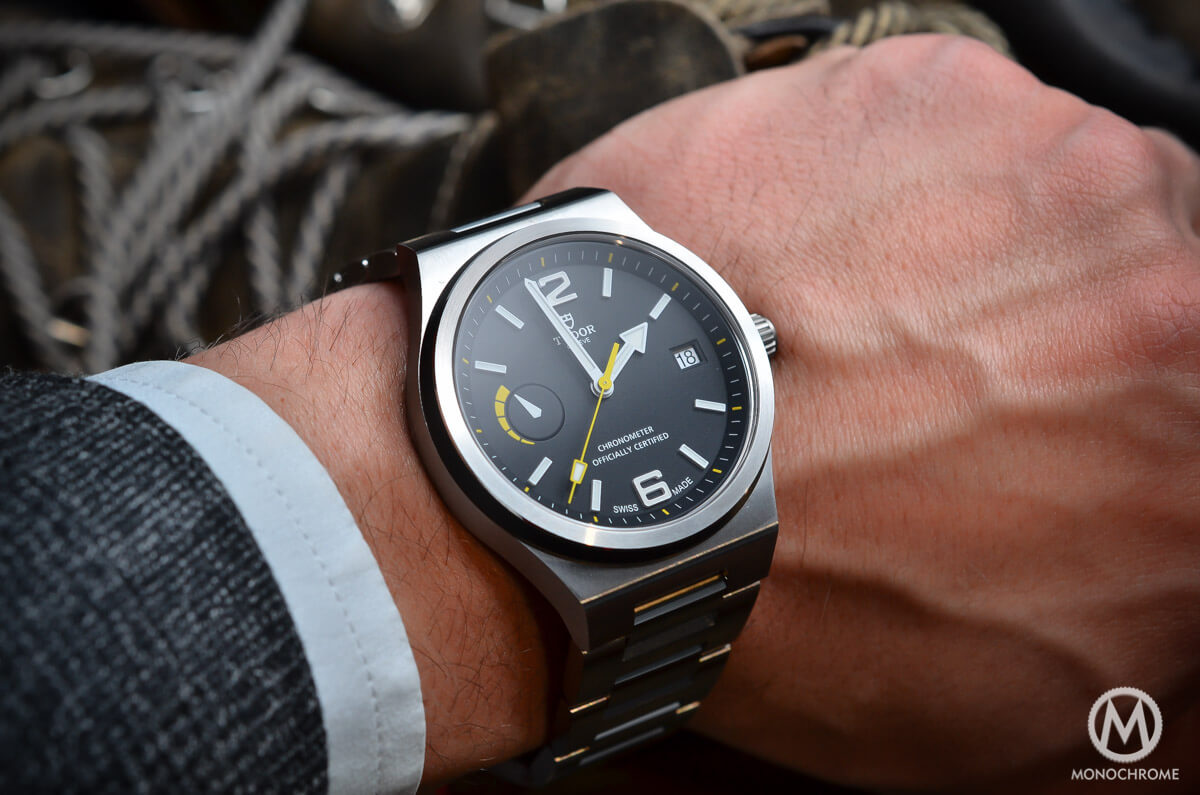 The quality of the construction (the dial, the case and the bracelet) is, as usual, not debatable; it is more than excellent in its price range. It’s clean, sharp, precise and very well executed. It feels like Tudor has the same standards as Rolex – oh wait, that’s close to be the case indeed. The dimensions are reasonable enough for great wearing comfort and an adaptability to every wrist. On the other hand, the Tudor North Flag doesn’t feel too small to be regarded as a proper tool watch. Conclusion: the North Flag feels like a tool watch with high quality and a design that we’re not going to debate here. As we told you, we expect that you’ve made up your own mind about it. The main point of interest comes from something else and the ‘Chronometer Officially Certified‘, as mentioned on the dial, already gives it away. 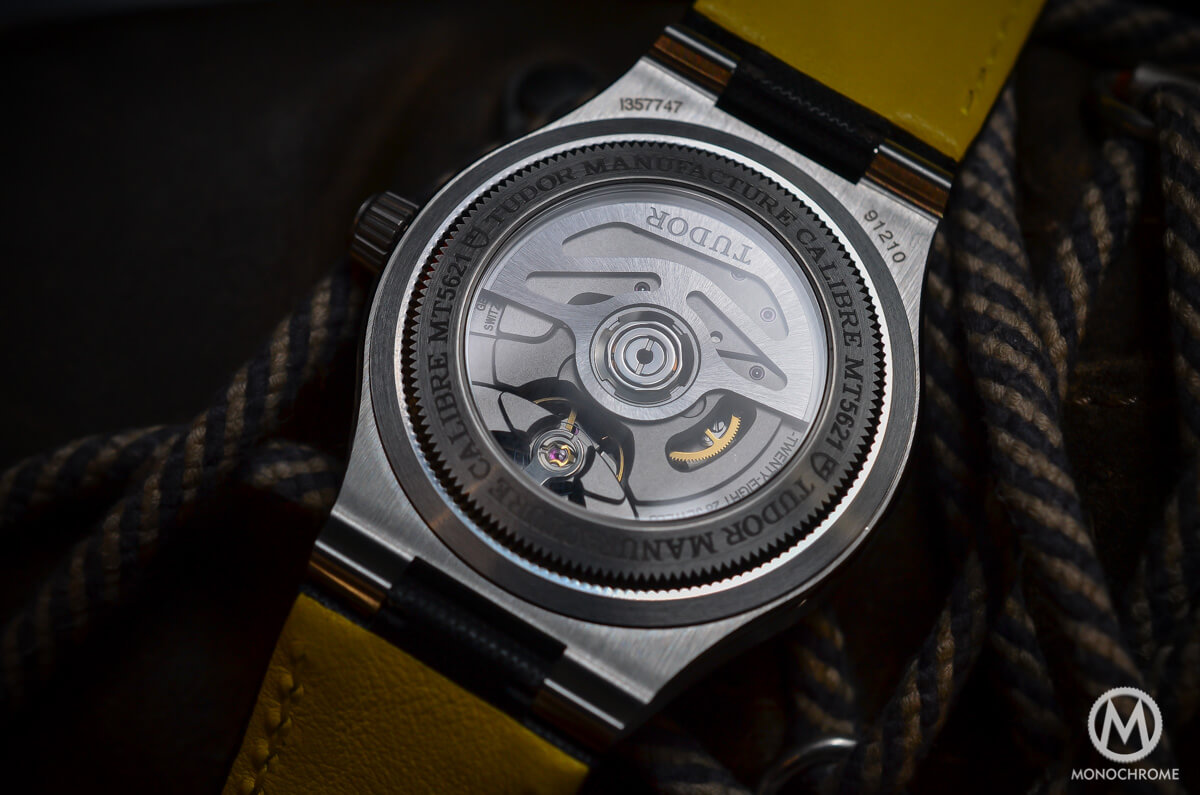 Here we are: the main novelty of the Tudor North Flag is hidden behind the dial. It features a brand new movement, exclusive to Tudor. Before this watch (and the 2015 edition of the Pelagos), Tudor used third-party movements (from ETA). Time has come for the turning point and an in-house movement is a major step. The Tudor calibre MT5621 can be seen through a sapphire case-back (another first for the brand). Compared to the ETA movements, that it’s going to replace, the improvements are noticeable. First, it comes with a rather long power reserve of 70 hours (almost 3 days). Secondly, it features an antimagnetic spiral, made in silicon, and has a balance wheel with variable inertia screws (that vibrates at 28.800 vph). Finally, it is chronometer, certified by COSC. The watch indicates hours, minutes and seconds on the central axis, the date through a discreet aperture at 3 (with instantaneous jump at midnight) and a power reserve indicator at 9 – something that the 2015 Tudor Pelagos (with 4 lines dial) does’t have even if it shares the same base movement.

The finish of this new in-house movement looks apparently simple, however it is not bad at all. The deliberate choice of sand-blasted surfaces on the bridges fits well with the tool watch concept and the details are pleasant. Of course, it is not according to Haute Horlogerie standards, however that was probably not Tudor’s goal with the North Flag. And on top of that, a movement finished with côte de Genève, circular graining, hand-beveled bridges, etc would mean an impressive price increase and thus be in direct competition with the big sister Rolex – something impossible to imagine. Instead, the price remains very reasonable. 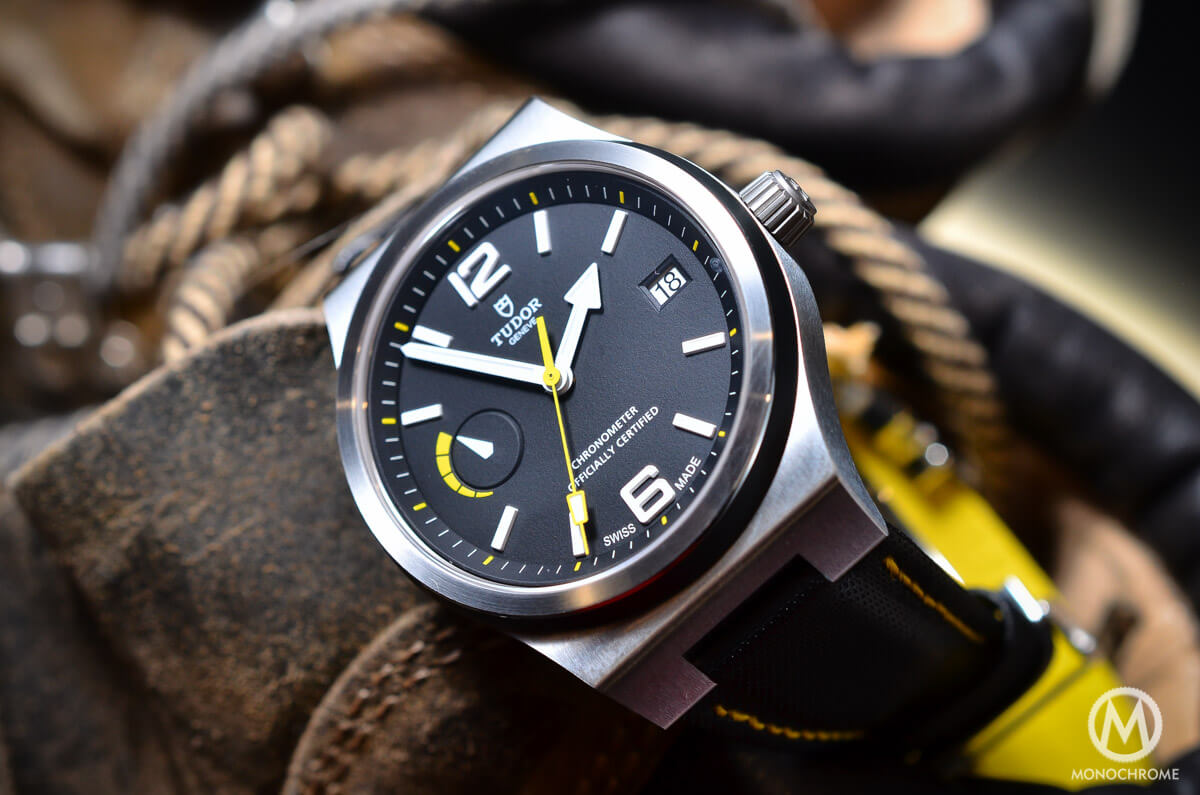 The Tudor North Flag with its in-house movement, high quality overall finish, and interesting features (compared to the previous ETA-based Tudor) keeps the same price range as other Tudor models. The edition on strap will be priced at € 3.060 Euros and the edition on stainless steel bracelet will be priced at € 3.150 Euros – basically an increase of 300 euros compared to a ETA-based Tudor, which is very reasonable for the pleasure of an in-house movement.

What to think about the Tudor North Flag?

Let us go over this question: why the North Flag is important and / or dangerous for Tudor? What is the real deal behind it, besides being another watch in the collection?

We told you, we waited a bit before introducing this watch to you, here on Monochrome-Watches. We chose to digest it and to hear reactions. We can look at this watch, not only as a new edition in the collection, but more as a Declaration of Independence from Tudor. It screams a strong wish to get rid of the past and of the recurrent imago of Tudor as a poor man’s Rolex. Considering the actual success of the brand, this argument is both totally understandable and also extremely risky.

The reason of Tudor’s success in the past 4 / 5 years is based on the Black Bay and the Pelagos, two dive watches that are heavily inspired on vintage Tudor Submariner, which were heavily inspired on the Rolex Submariner. The new lots show a cooler, and younger approach. No offense in this statement, because we are big fans of the Black Bay here at Monochrome – especially the midnight blue edition. Same goes for the 2014 Ranger that people often regard as a cool Rolex Explorer for a lower price. A low price associated with a great design inspired from one of the most valuable brands (Rolex) and a very good quality, made the success of Tudor. However, with the North Flag they take the risk to move away from these attributes. 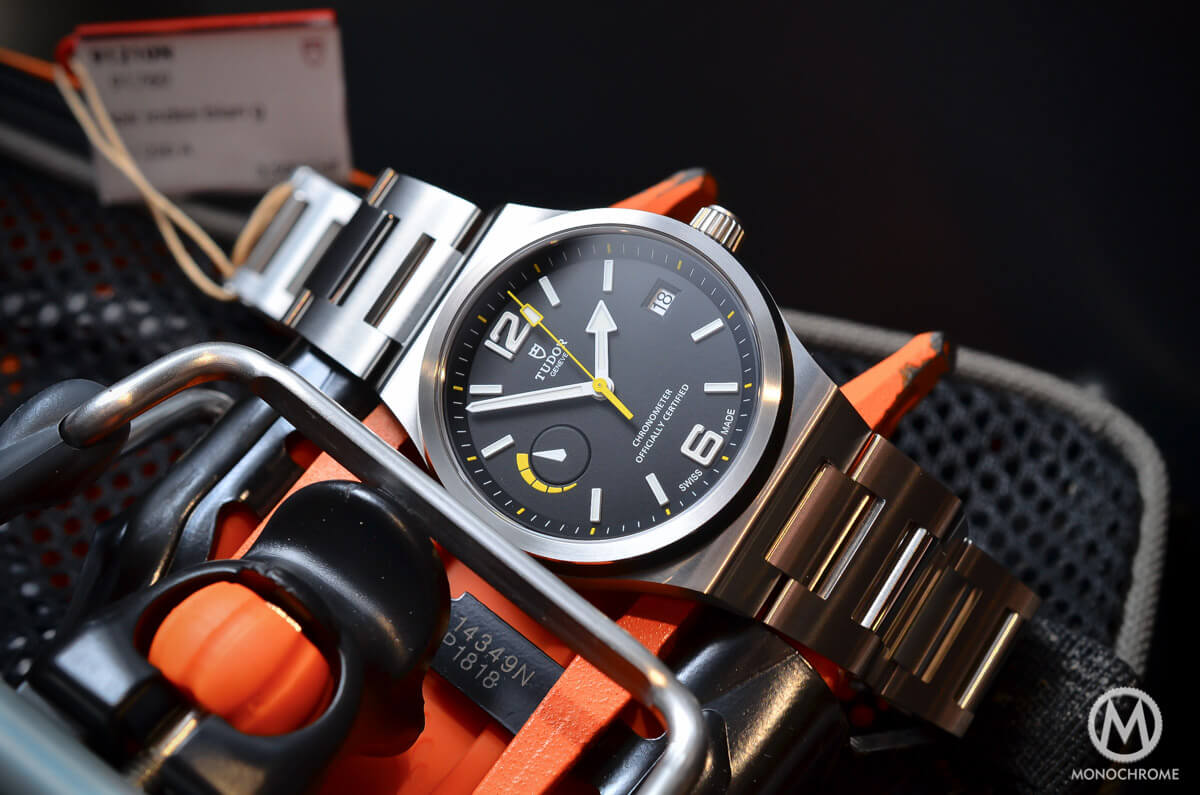 The move from ETA to an in-house movement is something we applaud for several reasons. First, it gives the brand more independence since it’s less dependent on external suppliers. Secondly, it adds more exclusivity to the collection. It also emphasizes the credibility of Tudor as a manufacture and it differentiates it from its big sister Rolex. Finally, the price remains acceptable. Considering who’s behind the development, we have no doubt about the quality of this movement that was certainly tested again and again before being launch. 1 point for the movement.

Now comes the question of the design. We’re not going to judge it here but it has to be said: the North Flag creates a break in the collection. It is far away from the vintage inspired theme that they used for several years. It’s even an important move from the Rolex-like inspiration. The North Flag doesn’t feel like the rest of the collection, with its bright yellow accents, its integrated lugs and mono-bloc case. It’s more modern, more ‘tool-ish’.

Concluding words: For the moment, the success of Tudor was based on a strong publicity made by aficionados who enjoyed the look of the recent watches, because they knew where they were coming from. However, if Tudor wants to develop on new markets and to attract new customers (younger or less hardcore watch aficionados), having its own personality is an important argument. A risky move but an inevitable one. We should forget for once about what WE (meaning hardcore collectors, watch freaks, watch nerds…) think about it but instead try to imagine how new-comers will react to this watch. The North Flag has many arguments compared to several other brands. The main one is also kind of ironic, because even if Tudor wants to have its independence from Rolex, its strongest point is also to rely on the super-strong imago of its mother company.