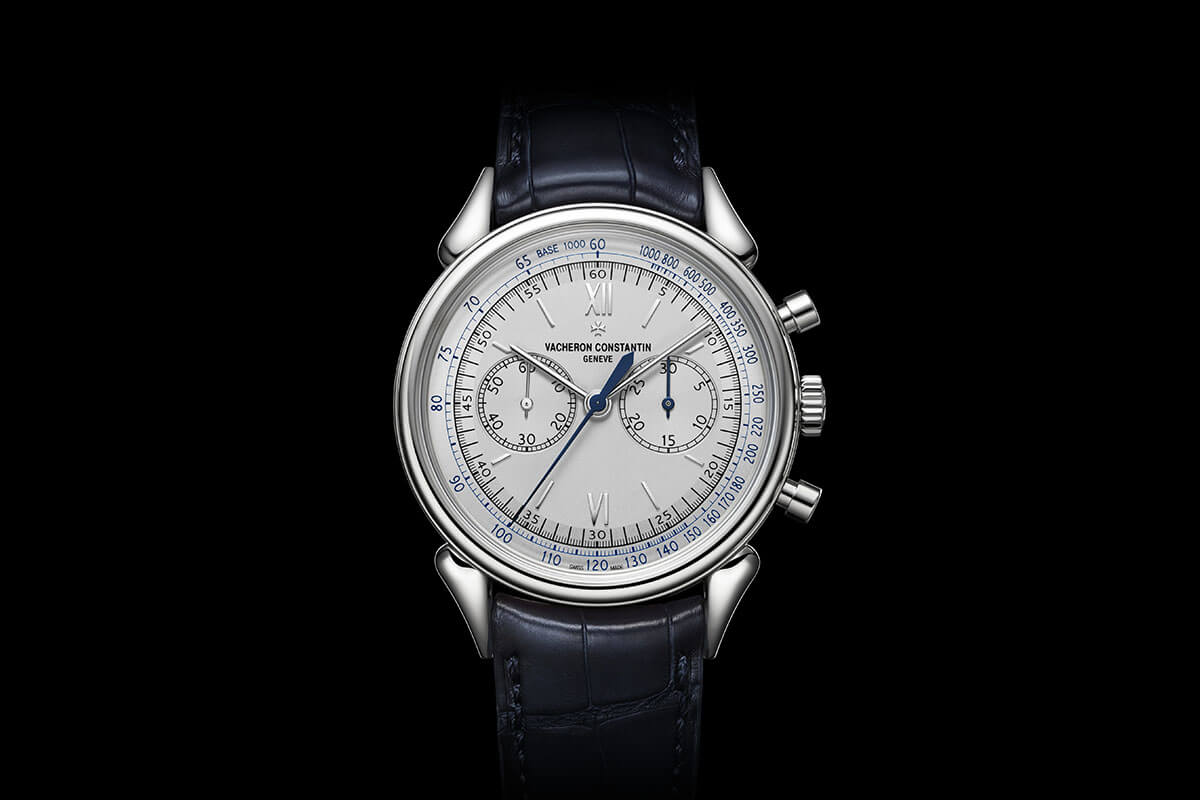 Let’s get straight ahead. This is probably one of the best looking dress-chronographs seen recently. Although we tend to keep objectivity at the center of our articles, Vacheron’s latest offer just looks superb. Based on a vintage watch from 1955 (that will be explained later), this new timepiece has it all: the right diameter, the right amount of Heritage, a superb movement and a dial that is… well you can see it. Here is the Vacheron Constantin Chronograph Historiques Cornes de vache 1955 to be introduced at Watches & Wonders 2015.

Yes, there’s one default: its name. ‘Cornes de Vache‘ stands for ‘cow horns‘. Not the sexiest name ever for sure. Some old Vacheron-Constantin were nicknamed ‘teardrops‘, which is as evocative but easier to explain to non-collectors. However, that ‘Cornes de Vache‘ name has a link with an historical piece from the old manufacture. The Vacheron Constantin Chronograph Historiques Cornes de vache 1955 is in fact a vintage re-edition of a 1955 chronograph, the reference 6087, an important watch as it was the last chronograph made by VC until 1989. As reported by the Hour Lounge (Vacheron-Constantin’s own blog), the 6087 was produced in only 36 pieces (28 in yellow gold, 6 in rose gold and 2 in platinum – note that the 2 platinum editions were made later, in the 1990s, with a different case) and it is one of the rarest and most collectible watch from VC. The 6087 came with a 35mm case with these typical cow horn lugs, round pushers and a water resistant case. Inside was ticking the Calibre 492. This is this exact watch that Vacheron-Constantin just decided to re-edit in a more modern (but still faithful) approach. 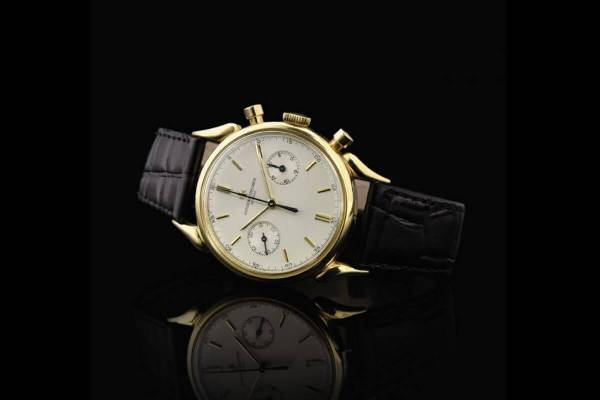 Recently, we covered another superb chronograph made by Vacheron-Constantin for its 260th anniversary: the Harmony, an entire collection mainly focused on chronographs, including the highly complicated Harmony Calibre 3500 or the important (economically and technically speaking) Harmony Calibre 3300. There are some similarities between this collection and the new Chronograph Historiques Cornes de vache 1955, not for the design of course (even if both are inspired by an historical watch from VC) but for the mechanics. When we reviewed the Harmony 3300, we thought that its new in-house movement could become the new standard chronograph of the brand. However, for the Historiques Cornes de vache 1955, Vacheron-Constantin chose another calibre of the Harmony collection, one that we didn’t really noticed, as cased in a diamond-set ladies watch, the Calibre 1142. 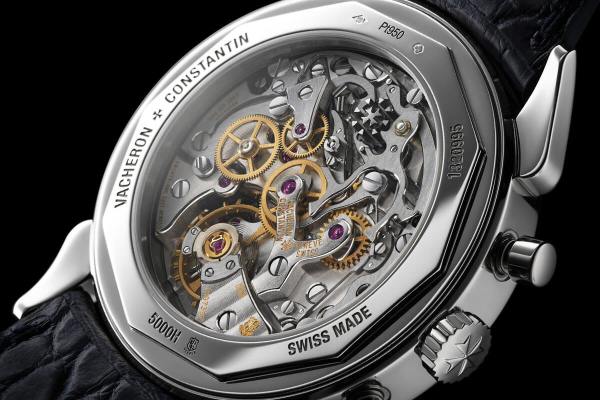 This movement is based on the old Nouvelle-Lemania ebauche (the Calibre 2310). Vacheron-Constantin, like many other high-end manufactures, was used to equip its chronographs with a highly redecorated version of the Lemania – as you can see in the Patrimony Traditionnelle Chronograph Paris Boutique. The new Calibre 1142 is still based on the old Lemania movement but it shows several improvements (as now Richemont owns the rights for this movement and is thus allowed to modify it).

First, it features a free-sprung balance (attested by the absence of a regulator index on the cock bridge) that beats at 21.600 bph instead of 18.000 for the old 2310. Then, it features a redesigned chronograph mechanism with different shape for the levers and a column wheel adorned with the Maltese Cross (just like the Harmony Collection). Finally, the power reserve is still the same at 48 hours (even with the increased beat rate). The finish is up to very high standards, as attested by the Hallmark of Geneva. To be true, even if this movement is not the most innovative technically speaking, it remains on of the nicest chronograph calibers available on the market. 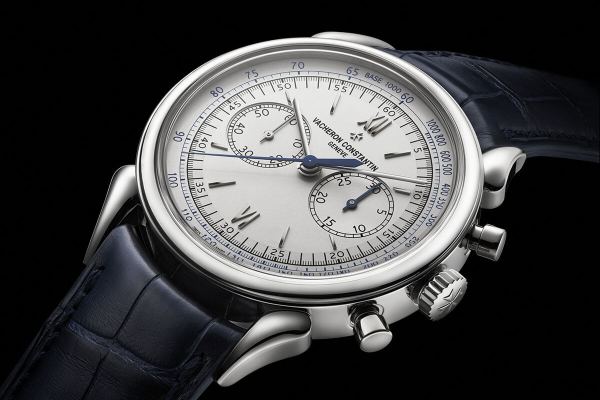 Back on the Vacheron Constantin Chronograph Historiques Cornes de vache 1955 itself. As you can see, there are many elements reminiscent of vintage VC here. The first and most noticeable feature is of course the shape of the lugs, these ‘Cornes de Vache‘ or ‘cow horns‘, attached to a round and flat case made of platinum and measuring a very reasonable and extremely elegant 38.5mm. Again, even if the size have been increased since the old and rare ref. 6087, this diameter remains a wise choice. The design of the dial is also faithful to some ref. 6087 (not like the one seen up here but like this one for example). The bi-compax layout, the tachymeter scale or the applied indexes mixing batons and Roman numerals (for the 12 and the 6) are all about 1950s design. Same goes for the silver coloured baton hands and the blued chronographs hands (matching the tachymeter scale and the alligator strap). 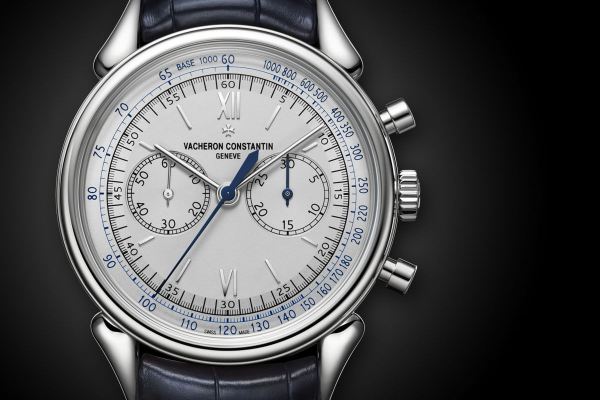 The Vacheron Constantin Chronograph Historiques Cornes de vache 1955 will be made in a non-limited run but will be issued in a highly exclusive production run. Price is expected around 95.000 USD. More on the official website of Vacheron-Constantin and the Hour Lounge.