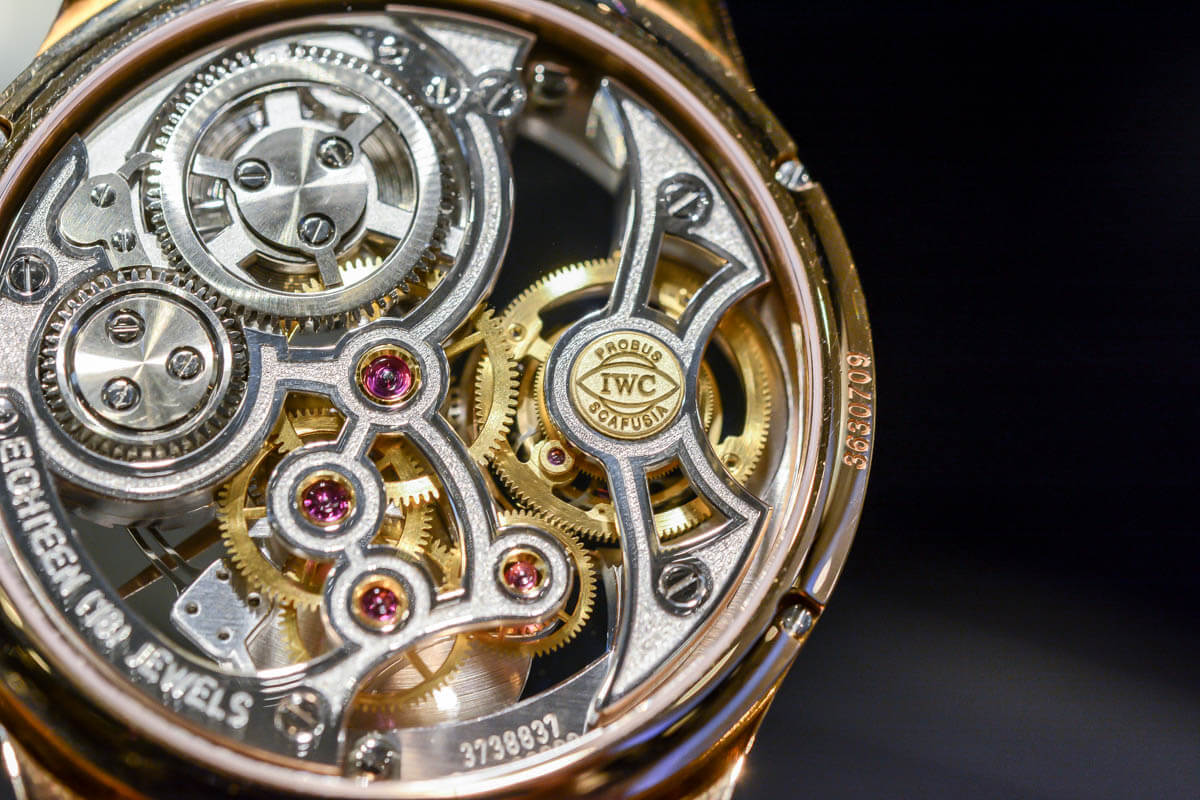 The ‘normal’ IWC Portuguese Tourbillon Hand Wound – that’s ref. 5463 and it comes in 18k red or white gold – is already a stunning example of a classic hand wound tourbillon watch. It features the typical style and looks that we know IWC for: clean, masculine, technical, classic, flying under the radar, no frills, and rather big. With this highly limited edition – there are only 25 pieces made – the brand from Schaffhausen is certainly taking a different path and deviates from its regular route. Moreover… the model in question was has not appeared in any of the brand’s catalogues and remained a secret until the first piece was sold, and some appeared in IWC boutiques. This handsome trio below, was photographed in the IWC boutique in Amsterdam. 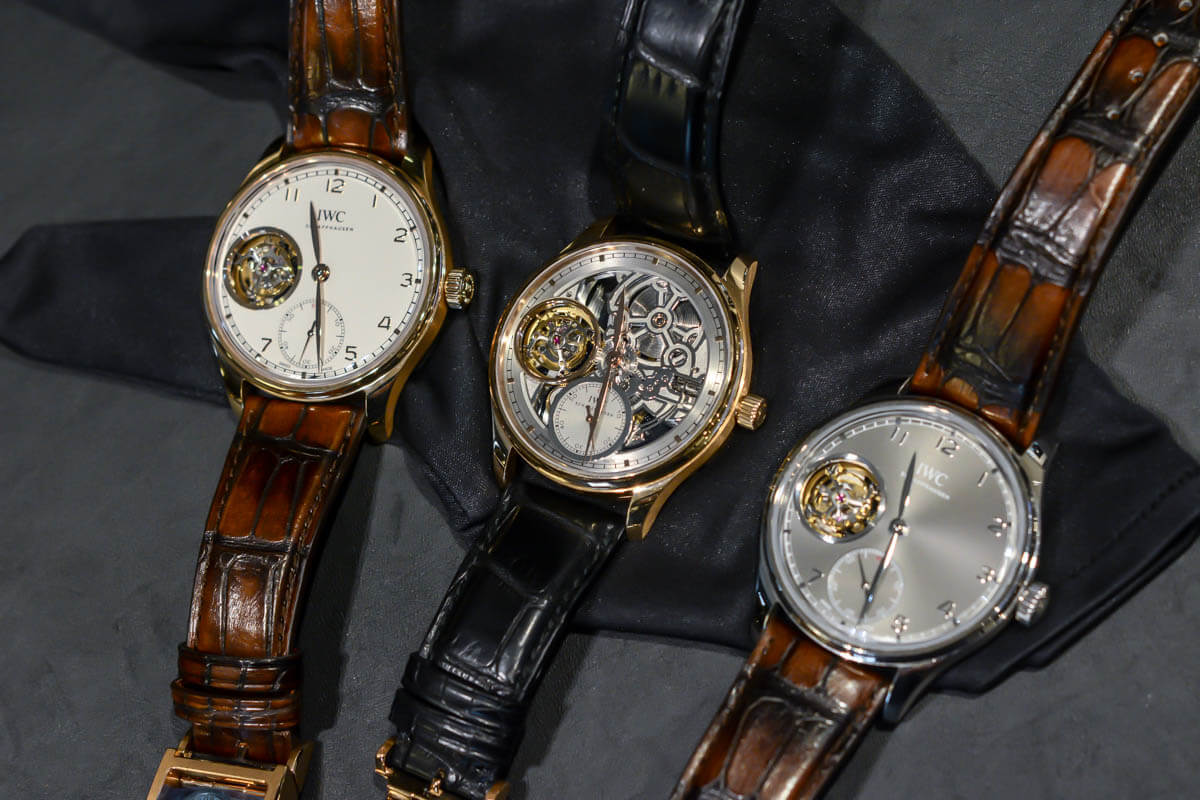 The photo shows the Portuguese Tourbillon Hand Wound in three of the four existing iterations: 18K red gold with a silvery/white dial (IW546302), 18K red gold Squelette limited edition of 25 pieces (IW546201) and 18K white gold with an ardoise dial (IW546301). The fourth variation is the Portuguese Tourbillon Hand Wound ‘Metropolitan Boutique Edition’ that comes in an 18K red gold case, with a striking olive colour dial (ref. IW546304). As you can see, the references of the variations with a dial starts with IW5463 and the Squelette starts with IW5462, so it is actually a different reference number (and a rare one).

For comparison’s sake we show you some more photos (please forgive the terrible quality, lighting was far from optimal) and two wrist shots of both the version with dial (ref. IWC5463) and the skeletonized version. Skeletonizing such a complex movement by hand, takes a lot of time, very skilled hands, a patient mind, and a strong design to start with. All that has a price, and the Squelette variation costs almost € 40k more than the ‘normal’ Portuguese Tourbillon Hand Wound. 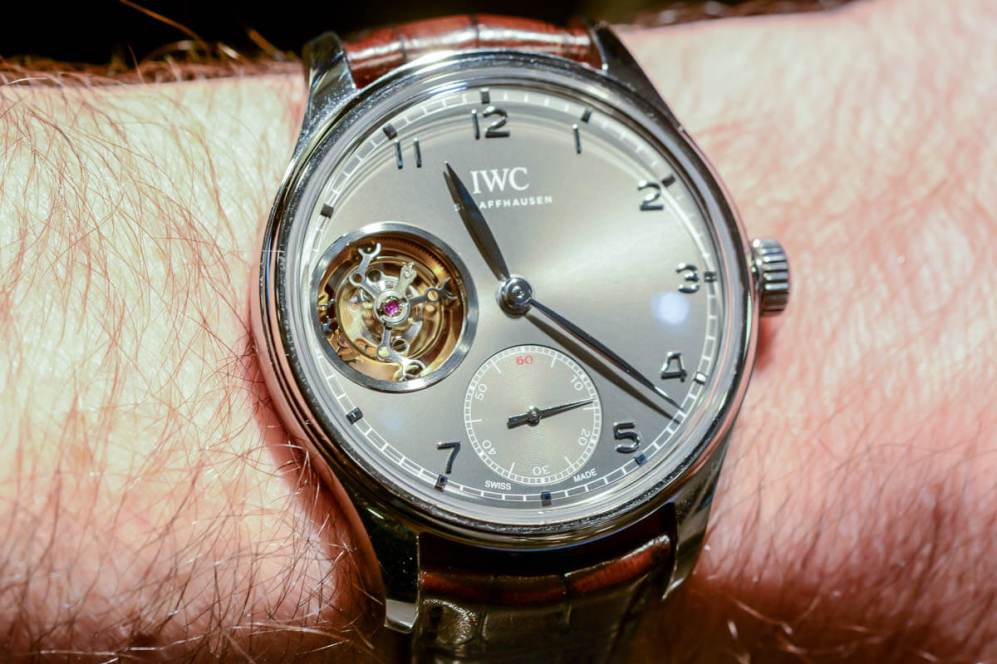 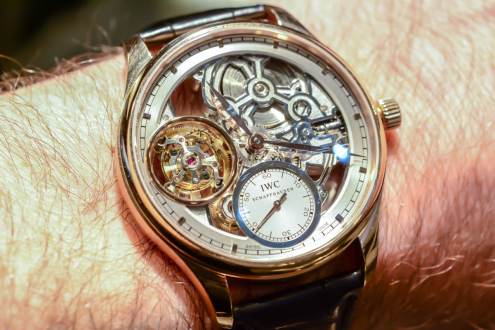 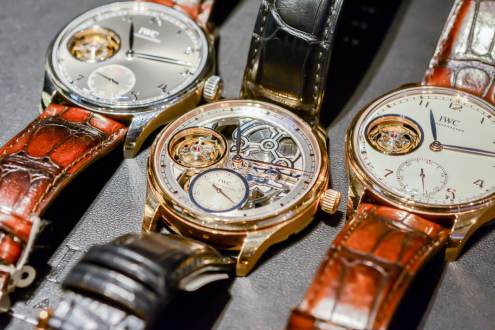 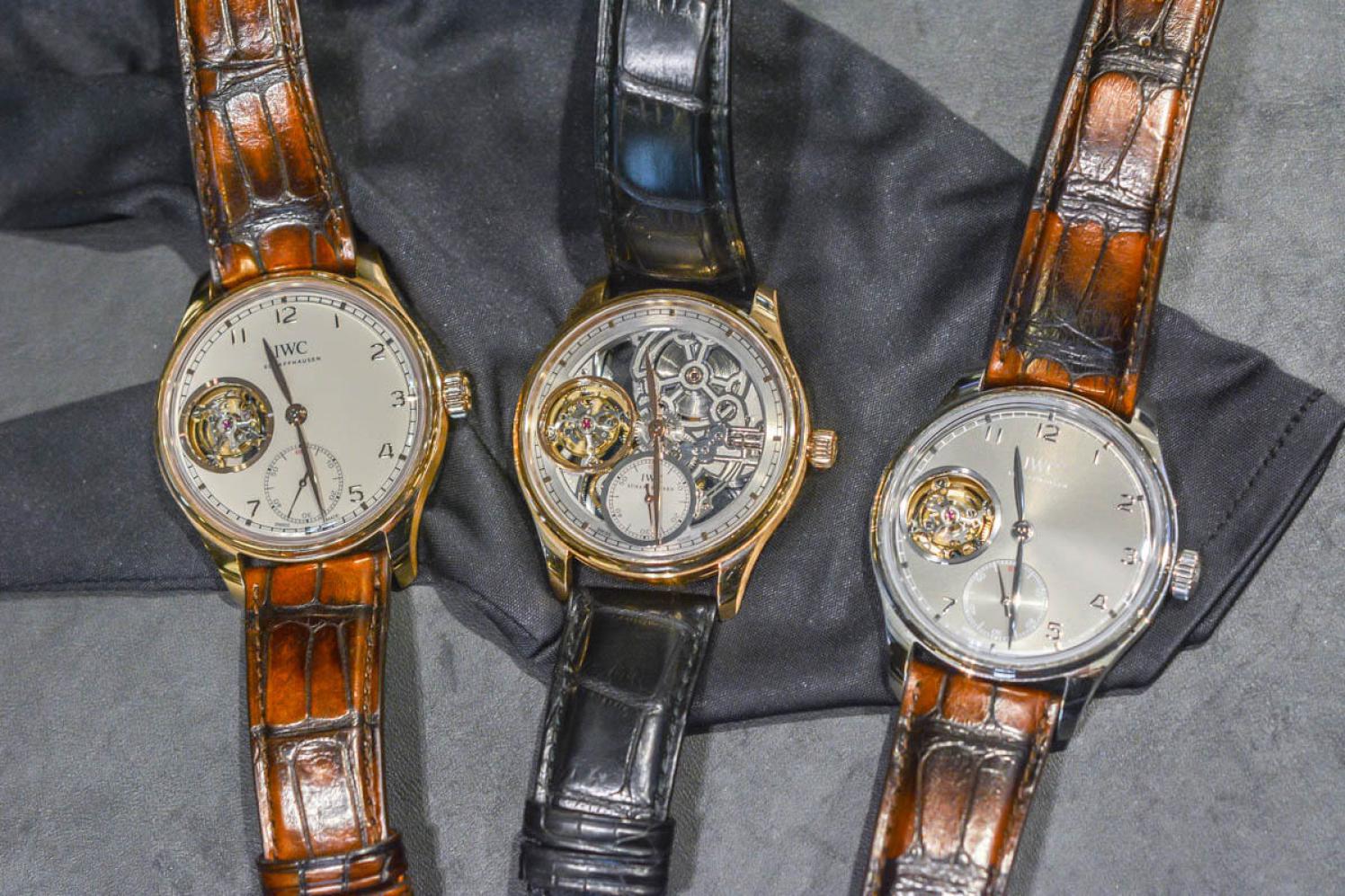 All iterations share the same 43 mm case that measures 11 mm in height. Despite its rather large diameter, the Portuguese Tourbillon Hand Wound wears not too big due to short and down-sloping lugs. All three models come on beautiful hand-stitched alligator leather strap, made by Santoni. Other design cues that are shared between both the Squelette and the ref. IW5463 models, is the railway-track-style chapter ring and a silver-plated seconds dial with a “60” in signal red. On the IW5463 models that’s part of the dial, while on the Squelette it’s the only part of the dial that is left behind. The rest of the ‘dial’ is a piece of sapphire crystal that serves to hold the metal rims around the tourbillon and the small second sub dial in place. 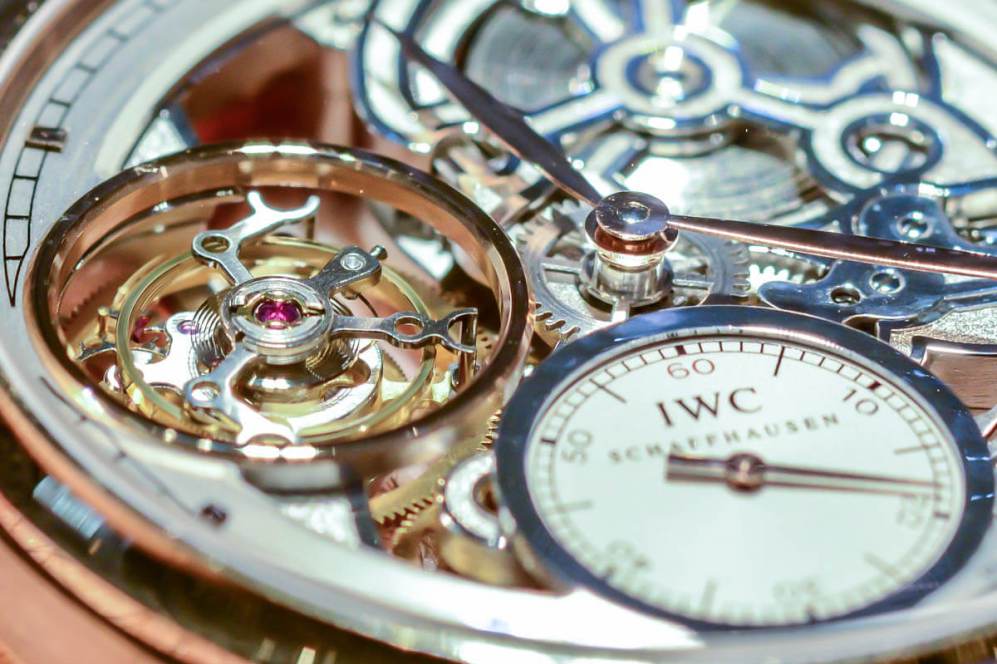 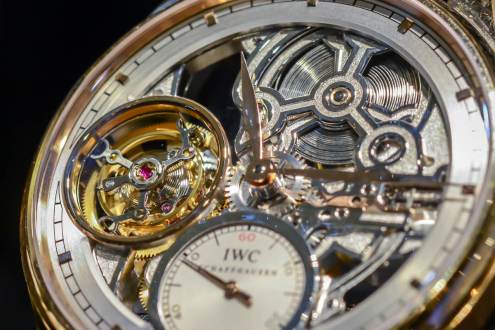 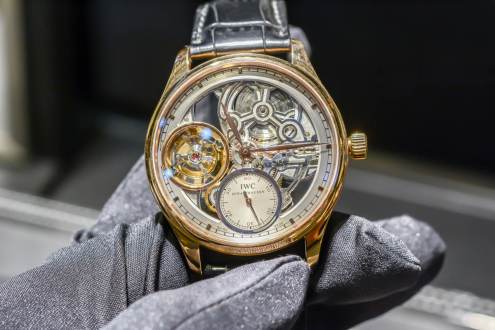 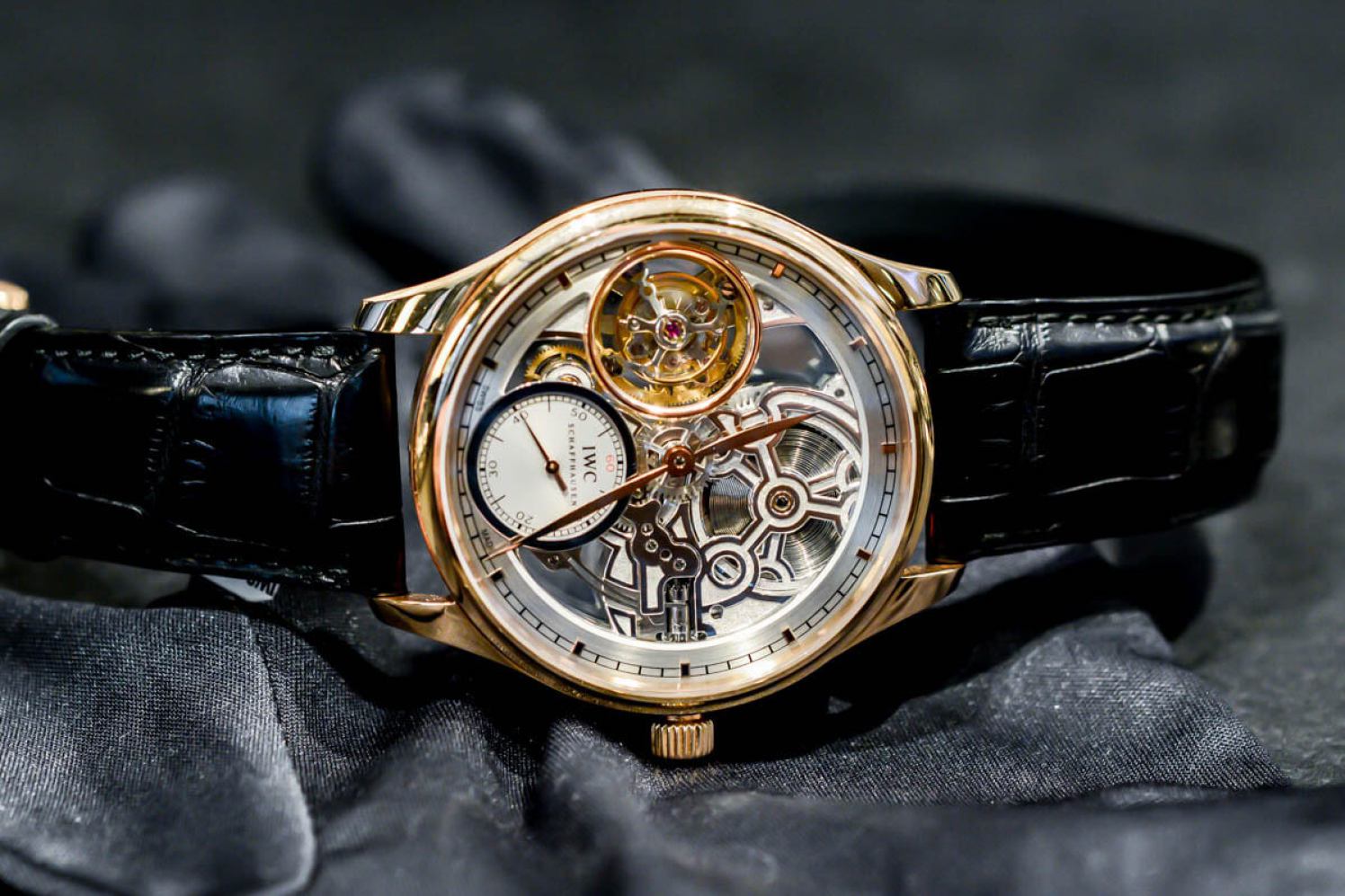 The movement that we see here is the IWC in-house calibre 98920, which is a specific reference for the Squelette. The non-skeletonized variation is calibre 98900 (like the 98920, it is part of the calibre 98000 family), which features a large three-quarter plate and a huge tourbillon bridge that are both adorned with circular Côte de Genève. Non of that on the skeletonized version (of course) as it is really skeletonized to the max, and only the bare minimum of bridges that are necessary for rigidity is left behind.

The Portuguese Tourbillon Hand Wound Squelette comprises several extremes. The watch itself does not fly under the radar, it is rather distinct, and features more frills than the average IWC timepiece. On the other hand, you will not find it on the IWC website, nor in any of their catalogues. So in that perspective it totally flies under the radar. An interesting timepiece that shows the bare essence of watchmaking and even includes a lovely tourbillon that makes a slow and elegant pirouette, every minute. And certainly an interesting timepiece for IWC collectors! 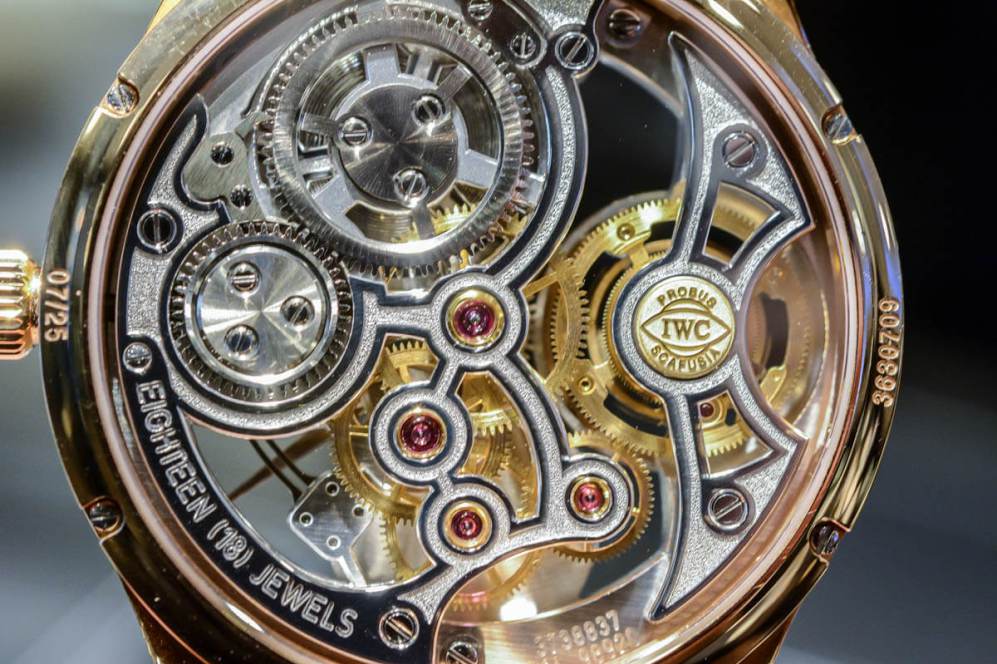 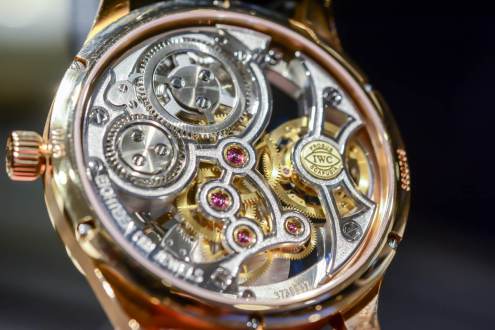 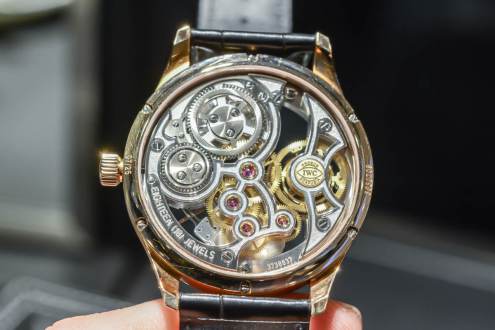 As you can see, the bare essence is what remains, although IWC’s watchmakers kept the large and rigid tourbillon bridge that is partially skeletonized. The movement measures 37.80 mm in diameter (quite large) and is 5.90 mm thick, and it’s large main spring barrel holds energy for approx. 54 hours of autonomy. The tourbillon rotates once per 60 seconds, and the escapement vibrates at a pace of 28,800 vibrations per hour.