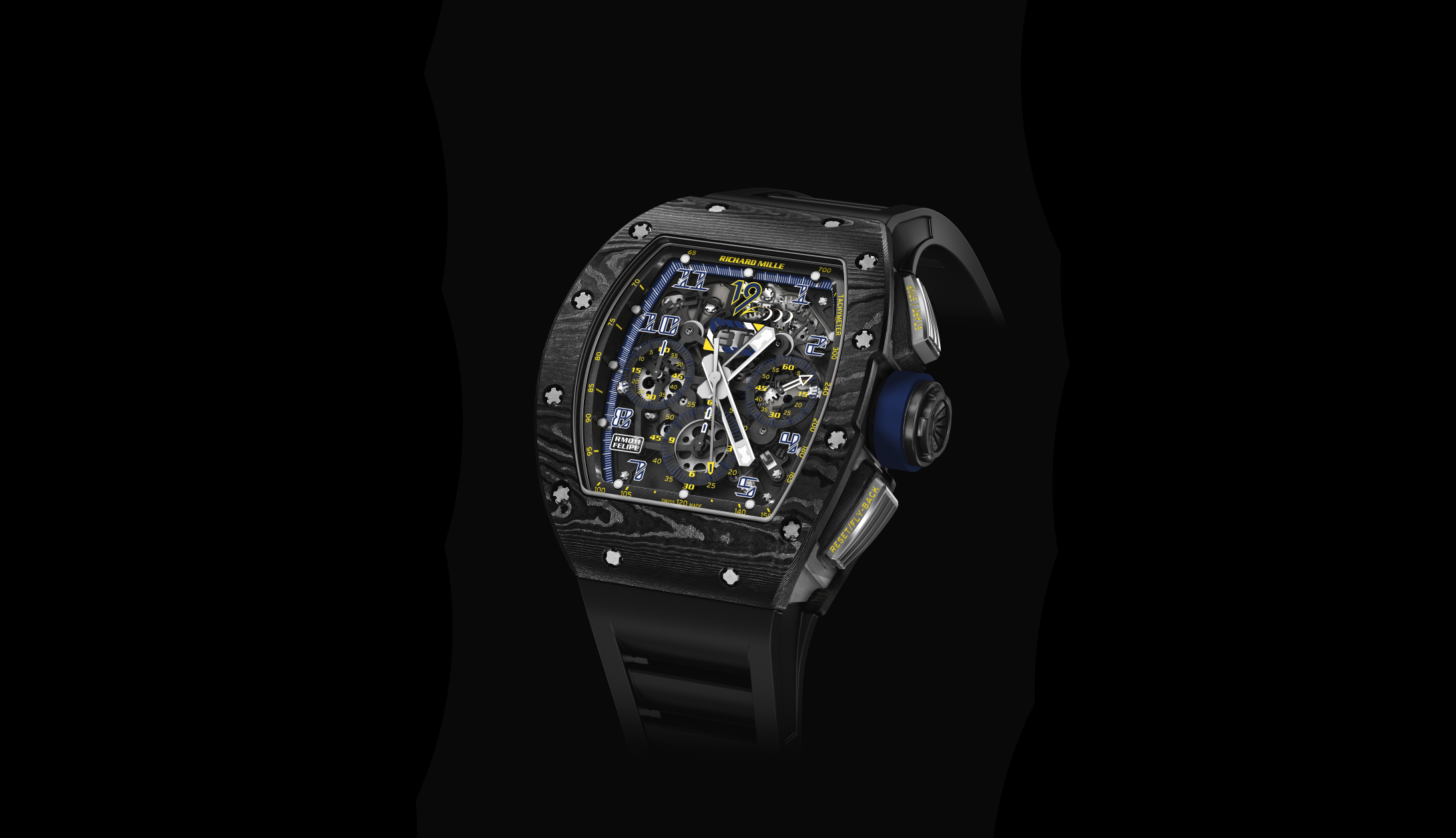 Whilst Nico Rosberg and Lewis Hamitlon once again took first and second place this weekend at the Austrian GP, Formula 1 welcomed back Felipe Massa onto the podium. It was the 40th podium of the Brazilian driver’s career, and Richard Mille had a timely gift for his long-time friend. The luxury watchmaker announced a special collection of RM 056 and RM 011 timepieces to mark the 10th anniversary of its partnership with Felipe Massa.

Massa was the first ambassador to join the Richard Mille family, back in 2005, and that same year, the Swiss brand released the RM 006 Felipe Massa. That year, the Brazilian driver made watchmaking history by becoming the first person to wear a tourbillon watch throughout an F1 season, no small technological feat for a mechanical watch subject to extreme g-forces.

Massa has since been giving RM watches their ultimate test, putting them through their paces on the track, and lending his name to some of the brand’s most accomplished watches, including the RM011 Felipe Massa Flyback Chronograph, boasting one of horology’s most exquisite complications, and the Richard Mille RM 056 Felipe Massa Sapphire.

“My watches are conceived and built with the F1 technological spirit inside of them, in the same manner as the cars are built,” Mille explained.

To celebrate the success of one of the most beloved F1 drivers of the modern era, the brand has revisited both models for a special ‘10th Anniversary’ collection inspired by Felipe Massa’s racing colors. The flanges, transfers, push-pieces, and crowns are bedecked in blue and yellow. 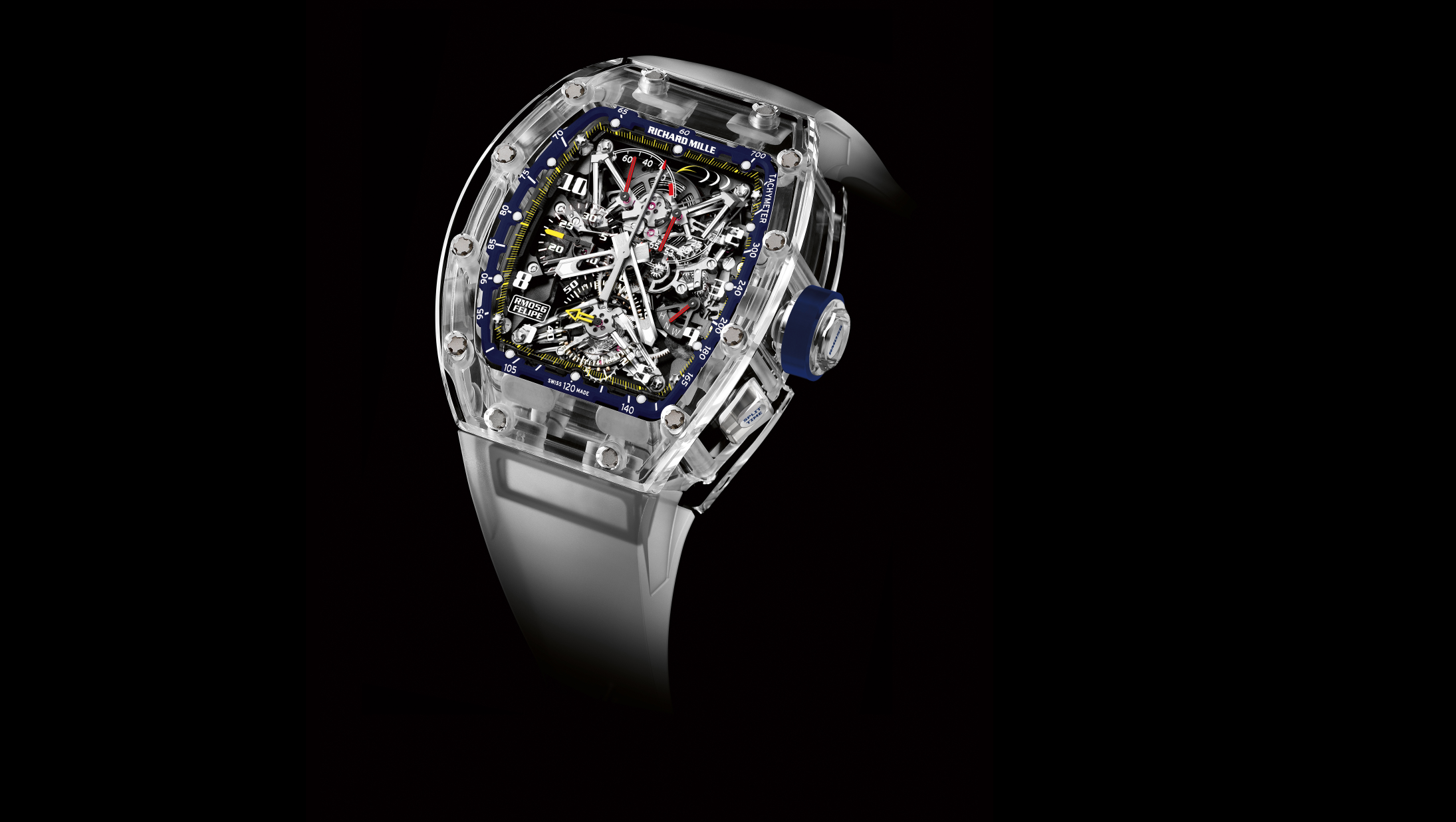 The RM 056 tourbillon comes presented in a superb case, produced from a single block of sapphire which requires no less than 1000 hours to cut and polish. The transparent case gives way to the beauty of the mechanics, including a split-seconds chronograph, a power reserve and a torque indicator, controlled by a function selector.

Meanwhile, the emblematic RM 011 receives some minor changes. The number 19, Felipe’s race number, has been cleverly reworked to suggest a 12 on the sapphire dial. Crafted entirely in grade 5 titanium and hand finished, the caliber features an annual calendar, a 60-minute flyback chronograph and a countdown function, assembled for this anniversary edition inside an NTPT® Carbon case, a material unique to Richard Mille.

Exclusivity defines this ‘10th Anniversary’ collection. Just ten of the RM 056 will be produced, whilst the RM 011 will be issued in a limited edition of 100 pieces. Felipe Massa’s signature is engraved on the reverse of both.

« It’s an incredible moment for me, but the whole team is feeling this too. The team has a great history and we continue to build on that. It’s a special day,» said Felipe Massa after the race. He may have been talking about F1, but there is little doubt Massa would say the same if he were asked about the brand he was wearing proudly on the podium.

As the midseason approaches, Massa currently sits in sixth position in the World Driver’s Championship with a total of 62 points.

Photo Credit: Richard Mille. For more information, please visit the official Richard Mille website. Follow Haute Time on Instagram to catch all of the new releases as they happen.