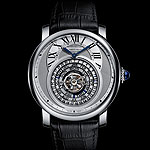 This year’s SIHH watch fair, held in Geneva, starts on Monday. If you’re a regular visitor to WatchTime.com, you’ve seen that several watches making their debut at SIHH have already been unveiled before the event. To prepare you for our upcoming on-site coverage of the SIHH, we’re giving you a taste of watches from ten brands that we (and, perhaps, some of you) will be seeing live for the first time there. Baume & Mercier will be adding three new chronographs to its 1950s-inspired Clifton collection. The Clifton Chronograph has a 43-mm case and a self-winding mechanical movement from ETA. Baume & Mercier expects the watches to be available in April 2014, retailing at $3,900 – $4,200. Click HERE to see the other two versions of this chronograph. In anticipation of SIHH, Cartier has released info on four different watches. Among the brand’s new pieces is the Rotonde de Cartier Astrocalendaire. Its perpetual calendar is presented in three concentric circles surrounding a flying tourbillon, with the date on the outermost ring, the month in the center, and the day of the week on the inside. A limited series of 100 pieces, the watch will be priced at about €150,000 (approximately $206,000). Click HERE and HERE to see more Cartier watches debuting at SIHH 2014.