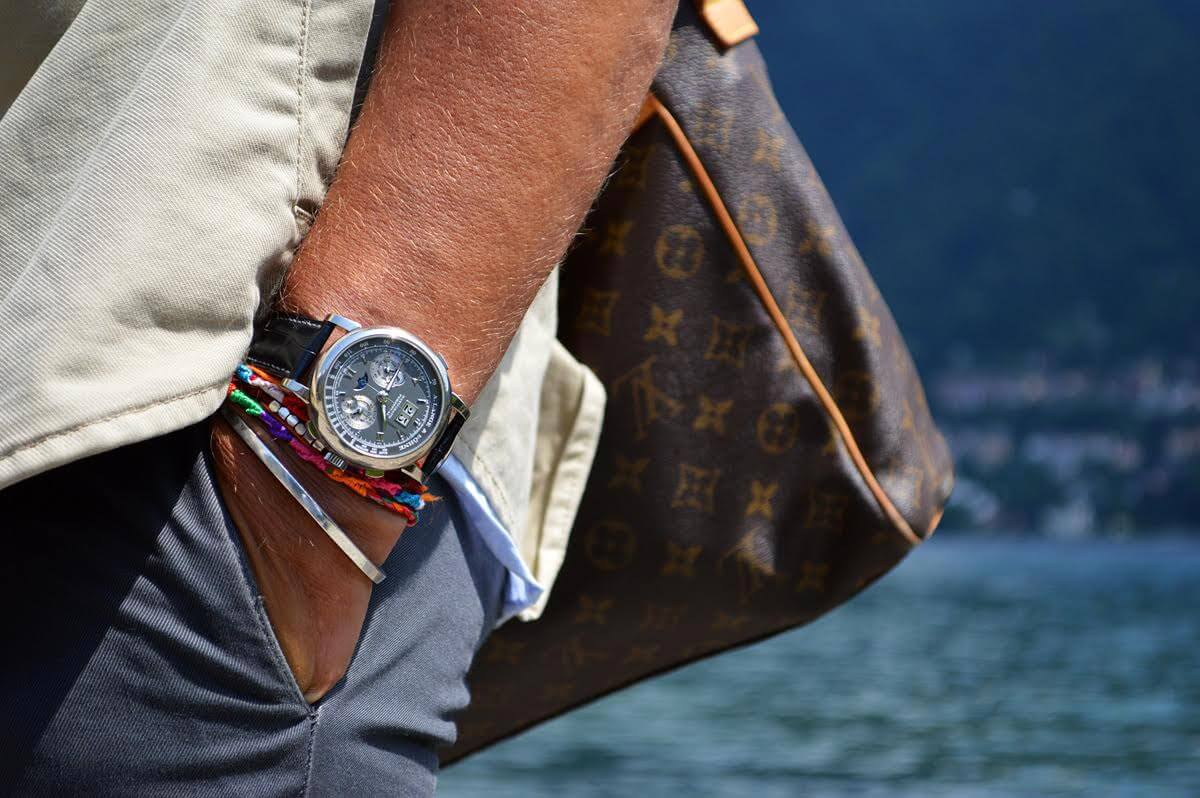 In our second instalment of the Collector Series we sit down with one of the coolest guys in watches, Kristian Haagen. He’s a watch enthusiast (watchgeek), collector, author, lecturer and advisor to auctioneers (it must be tough when people ask what he does for a living at dinner parties!). However you may know him best for his mind-blowing photography and instantly recognisable fluorescent bracelet wrist shots on Instagram. In this episode we discuss one of his most iconic pieces, the A. Lange & Söhne Datograph Perpetual, the extended version of the ‘regular’ Datograph that is also affectionately know by some as the Dufour-graph. 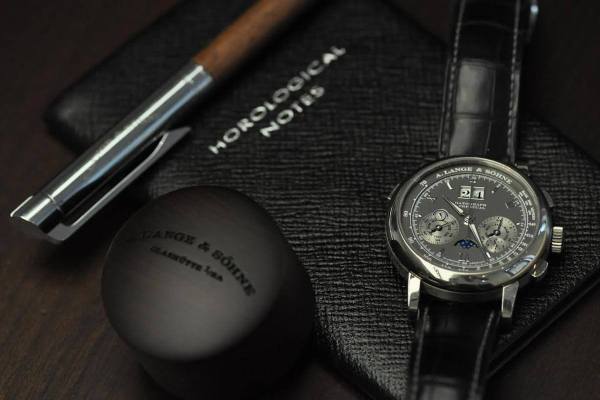 When did your watch journey start?

I started collecting in 1993. The Internet really boosted my passion for watches and I didn’t feel alone with my interest of everything horology. My first big purchase was a Tudor Chronograph in 1993. And after that I bought two vintage Rolex Submariners during a holiday in Miami. From there…well…it just went crazy.

What drew you to A. Lange & Söhne?

I have always had a weak spot for Patek Philippe (which today takes up most space in my bank vault) and even-though I knew that A. Lange & Söhne also represented exquisite quality and craftsmanship, I saw the brand as “an old man’s brand”. That completely changed around 2011, when a good friend let me wear his Lange 1 Timezone for a couple of weeks.This watch was absolutely perfect! And pricy. I was still spending all my money on Pateks and vintage Rolex at the time. Lange was not on the shopping list.

What attracted you to the Dato and not another model from A. Lange & Söhne?

I was actually looking for the normal Datograph in platinum as that watch represents something really special. In 1999 A. Lange & Söhne had only been back on the market since 1994, and still they managed to come out with an in-house flyback chronograph before Rolex and Patek Philippe. You have to tip your hat on that feat! But one day at my optician I met a gentleman wearing the grey dial Datograph Perpetual and right then and there I knew that was the one to go for. 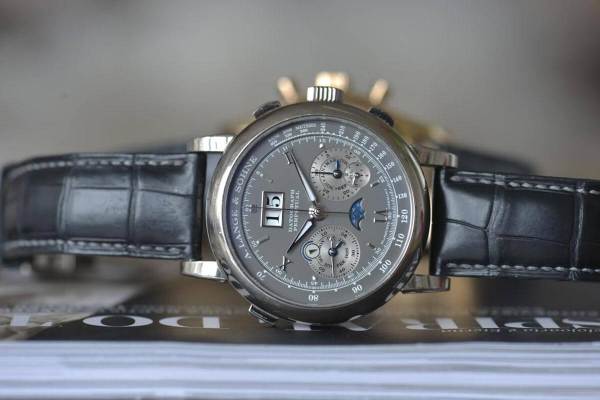 In 2013 I purchased a pre-owned grey dial Datograph Perpetual in white gold, ref. 410.030. Not the version that was introduced during SIHH in 2015 (this one, ed.), but the original version that only had a short production run of less than two years. I believe less than 50 or 60 of these grey dial versions were originally produced and that dial colour just hit me right in the middle of my ticker, so to say. The watch is absolutely stunning, perfectly sized (41 mm) and is without doubt the best looking watch in my collection.

Was the movement an important consideration?

Well, even people who do not know anything about watches can see that the caliber L.952.1 manual winding movement is something very special. Looking at it is like diving into perfect architecture, swimming in a world of immaculately decorated wheels and bridges and getting a very intimate look at micro mechanics made by the finest craftsmen and artisans. 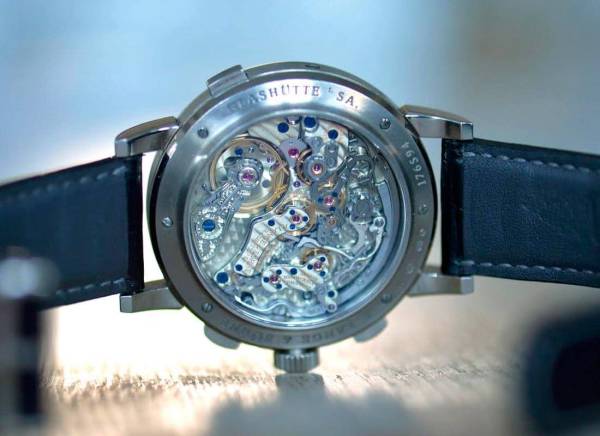 Can you tell us more about the movement?

A watch from A. Lange & Söhne is prettiest seen from the rear. The amount of work and decoration that goes into every single movement is amazing. A what really attracts me to the brand is that every movement has the some attention to details, no matter if entry level or Super Complications. That you don’t see at Patek Philippe. 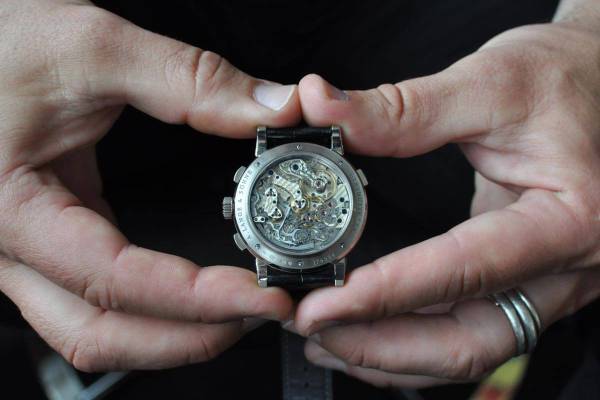 A. Lange & Söhne are notorious for their accuracy, have you ever tested the Dato’s?

I have never tested it, no. Maybe I should. I appreciate good precision.

How much wrist time does the Dato get?

Admittedly, it is not the watch I wear the most. I travel a lot and hence appreciate at least a GMT or world time function when on the road. But I wear it as gladly with a white T-shirt as well as at at more formal occasions. 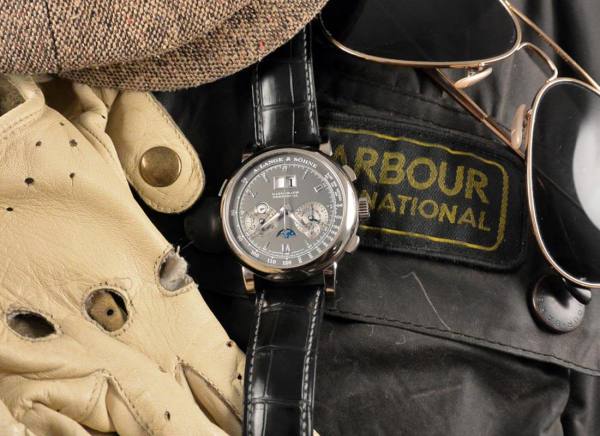 A. Lange & Söhne are very much one of those manufacturers who fly under the radar outside watchgeek circles, does the Dato get many questions out and about?

Most people around me know about my passion for watches and expect me to wear interesting timepieces. But as you say, not all know about A. Lange & Söhne. You have to have been through your fair share of horology to appreciate A. Lange & Söhne. It took me nearly 40 years to understand the brand!

Any. However never for sports nor going to the beach/pool.

Do you listen to the advice of anyone before making a purchase?

I am very spontaneous, when I fall in love. When in love, not many listen to reason. That said, when extinguished gentlemen like Gisbert Brunner or Philippe Dufour both claim that the Datograph is the best chronograph around, of course I listen. 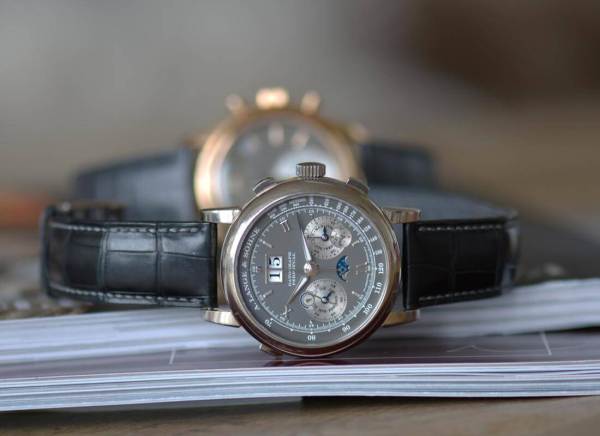 Is the joy of wearing a watch more important to you than considering its resale value?

I am not a wealthy man so of course it is good to know that my passion can one day be exchanged into retirement funds. That said, when time is my enemy (hopefully many moons from now), I will still wear a nice watch. But never wind it.

What is more important to you: Brand Heritage? Aesthetic? Accuracy? or Rarity?

Brand heritage does not mean much to me. Craftsmanship, quality, precision and of course looks are important. 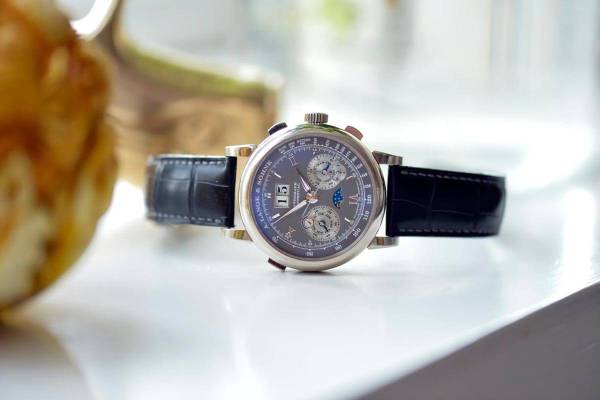 I don’t think I will ever stop collecting. Once in a while I feel like downsizing in terms of volume. But then some other great watch appears in my radar.

Which brands do you think are doing interesting work out there?

Besides from A. Lange & Söhne, I think Patek, Vacheron and AP are interesting to follow. Those are the obvious choices. But I am warming up to H. Moser & Cie and F. P. Journe. I don’t per se see myself as a collector of indie brands, but these two brands appear very frequent in my Google search.

Tell us a bit about your bracelets!

Hahaha! Funny question. Well, I like to wear colourful bracelets as watches tend to be somewhat conservative and in dull colours. Also, my wrist shots on Instagram are instantly recognised due to my very colourful breaded bracelets. So they are sort of a uniform when I shoot wrist shots.

Do your research! And when you have done that, do some more! Also, try on as many watches on your wrist as possible. Also, let you fingers wander on the case, crown, shoulders etc. Get a blind person’s feeling for quality and craftsmanship. And never buy a watch that is advertised as “luxury”. Paris Hilton killed that word.

When collecting do you think its important to stick to a brand or a category (ie.Patek/IWC or aviation/dive pieces?)

My collection has a bit of everything. That said, I only collect sports Rolex and most of my Patek Philippe collection consists of Nautilus-models. I also have Seiko and Casio G-Shocks in my collection. And a Breitling digital watch from 1978.

Is the Dato a keeper or can you see it leaving your collection one day?

I tried to convince Kevin Rose to trade his amazing platinum A. Lange & Söhne Zeitwerk Handwerkskunst for my Datograph Perpetual during SIHH 2015. Alas, I left Geneva before we could come to any kind of agreement. With that said, I could see myself trading the Datograph Perpetual. But it had to be for something very very special! And if not Kevin’s Zeitwerk, then I cannot say which watch. 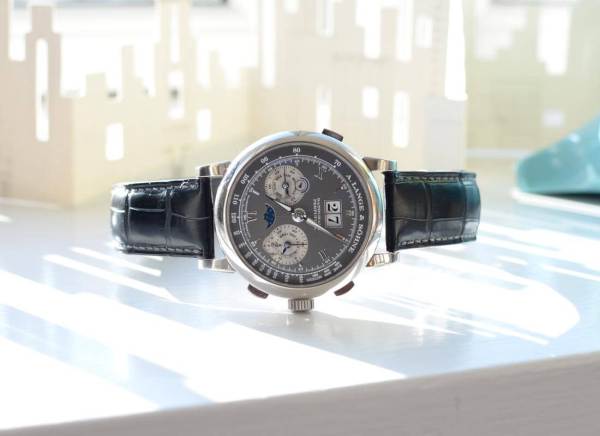 What (if anything) have you got your eye?

I would really like to add an H. Moser & Cie Endeavour Perpetual “Funky Blue” with that new kudu strap. That really has my heart beat a little faster. That said, I think I will add a F. P. Journe before an H. Moser. And since I just bought an Audemars Piguet Royal Oak, then it will take even longer before I have funds for the next purchase…