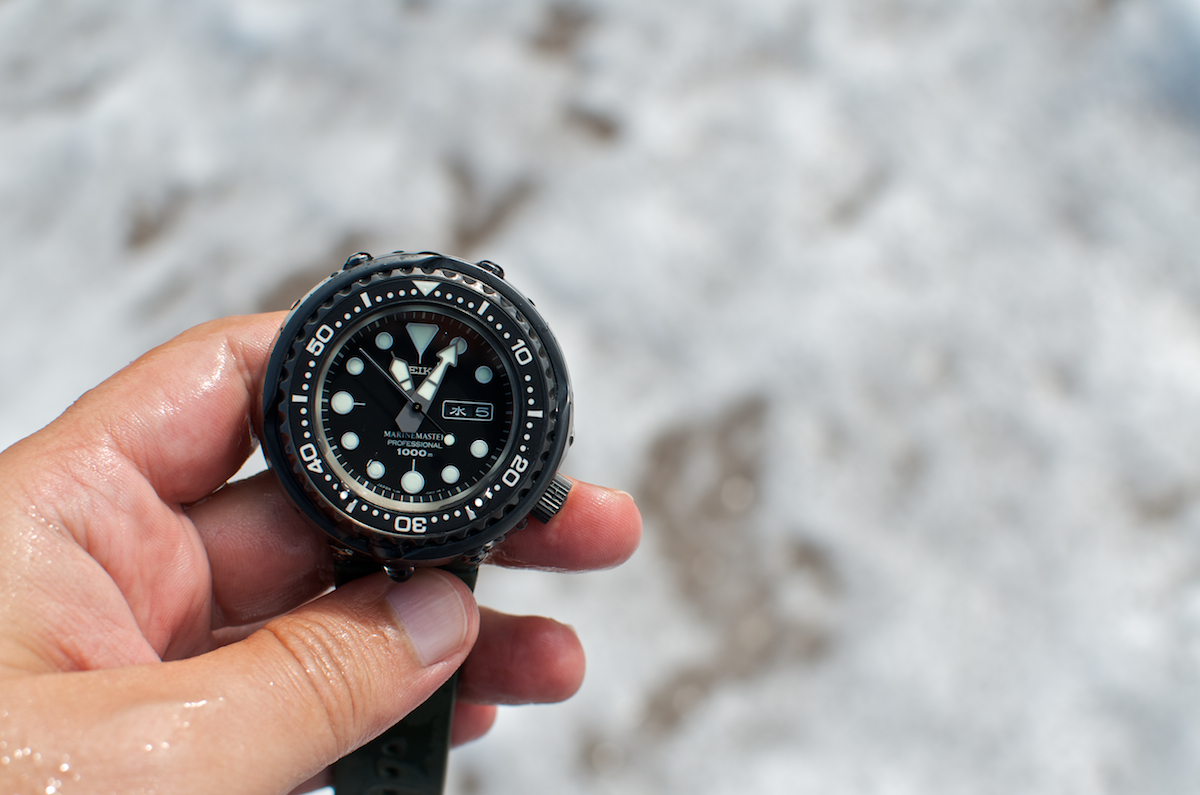 Few watches possess the aura and the character of the Seiko Tuna. Introduced in 1975 in a  mechanical form, it was upgraded in 1978 with a quartz movement, after a Japanese saturation diver sent a letter of complaint. The Tuna, or Tuna-can as watch aficionados’ call it, is a watch that carries no compromises. It’s either love or hate. There are countless posts on Internet about it – and some where people seem to misunderstand its importance and to discard it as an ugly watch. Many however manage to explain its main purpose and its significance seem to become hooked. I belong to the second category and I decided to take my own Seiko Tuna with me, during my summer vacations, for an in-depth review – but that’s going to be the second part of this article. First, we must look back in the past and have a closer look at the history of the Seiko Tuna Prospex (Professional specifications).

Seiko produced its first diver’s watch in 1965 (62-MAS). They continued in 1967 with the ref. 6215-010 and in 1968 with the ref. 6159-7001. These three models were considered excellent, as they embodied all the lessons the company had learned up to that point. However, diving and scuba changed rapidly – the conditions the divers had to face were also rapidly evolving. Concerning the Tuna, all started in 1968, when the company took a letter from a saturation diver from Kure City, in Hiroshima prefecture. In that letter, he complained that Seiko Divers watches often filled with helium and lost their crystals in saturated environments. A group of engineers from Seiko, who read this letter with great interest, realized the problem and decided to produce something else, a watch that could withstand all the problems of professional diving. Ikuo Tokunaga and his team started to develop this new watch in 1968, from scratch, in order to create the perfect professional diver’s watch – something that took them seven years. 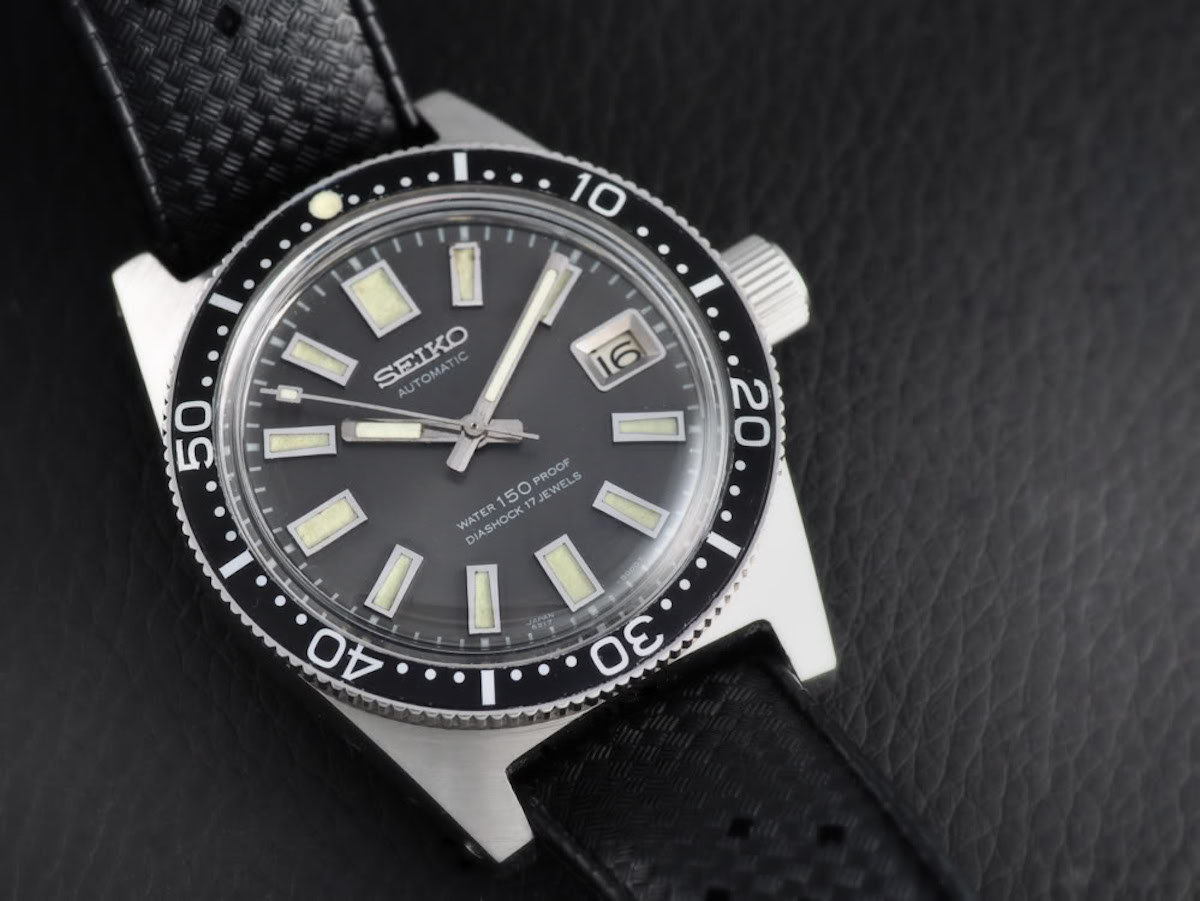 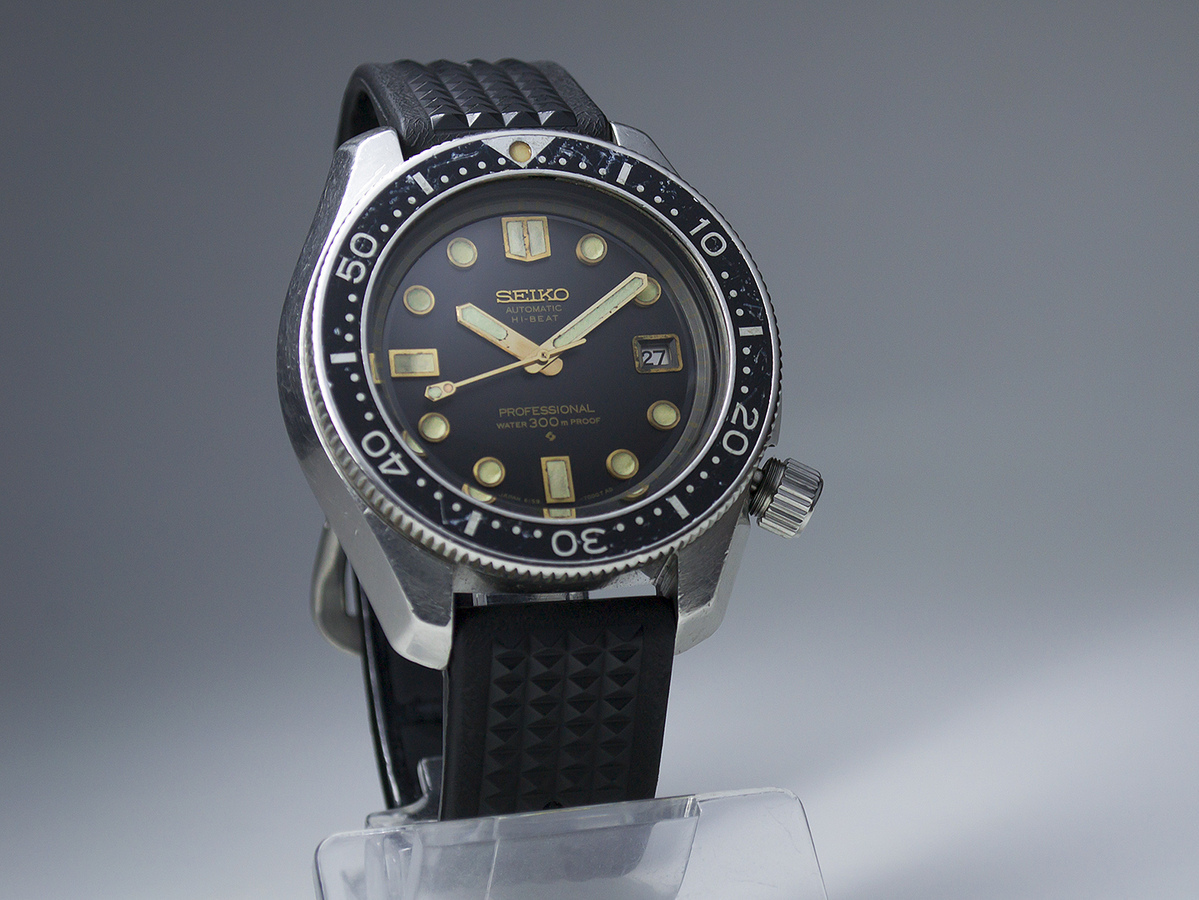 At that time, Rolex (with the Submariner and later the Sea-Dweller), Doxa and Omega (with the Ploprof – the watch and its development are explained in detail here) were the first to work on the Helium Gas problem, that divers faced during their saturation dives (Please hold for a future article on that). The same issue dealt from Seiko on a different level. They decided to make clean slate of the past and to design something new, following here different technical solutions, compared to Rolex for example. As Mr. Tokunaga states, “…  using the special gasket of L type and one-piece case became the conclusive factor in the He-tightness. As the result of the experiment, the penetration of helium gas is suppressed by about 1/100 to the conventional watch case, the inner pressure of the case does not turn into high pressure and the diver’s watch of the ideal saturation diving specification which does not need “helium gas escape valve” is completed.” However, Mr. Tokunaga’s team didn’t stop there. The first Tuna (600m) they created in 1975 (ref. 6159-7010) had a high-end / high-frequency automatic caliber beating at 10 Hz / 36,000 bph. This Seiko Tuna first edition was a watch (or should we say instrument) that was the result of more than 20 patents and world’s firsts – like the titanium monocoque case, the ceramic protective shroud, the L shaped gasket we mentioned earlier, the vented strap and many more. At 89,000 yen, it was not cheap either but it was a groundbreaking product, with some features becoming later industry’s standard. 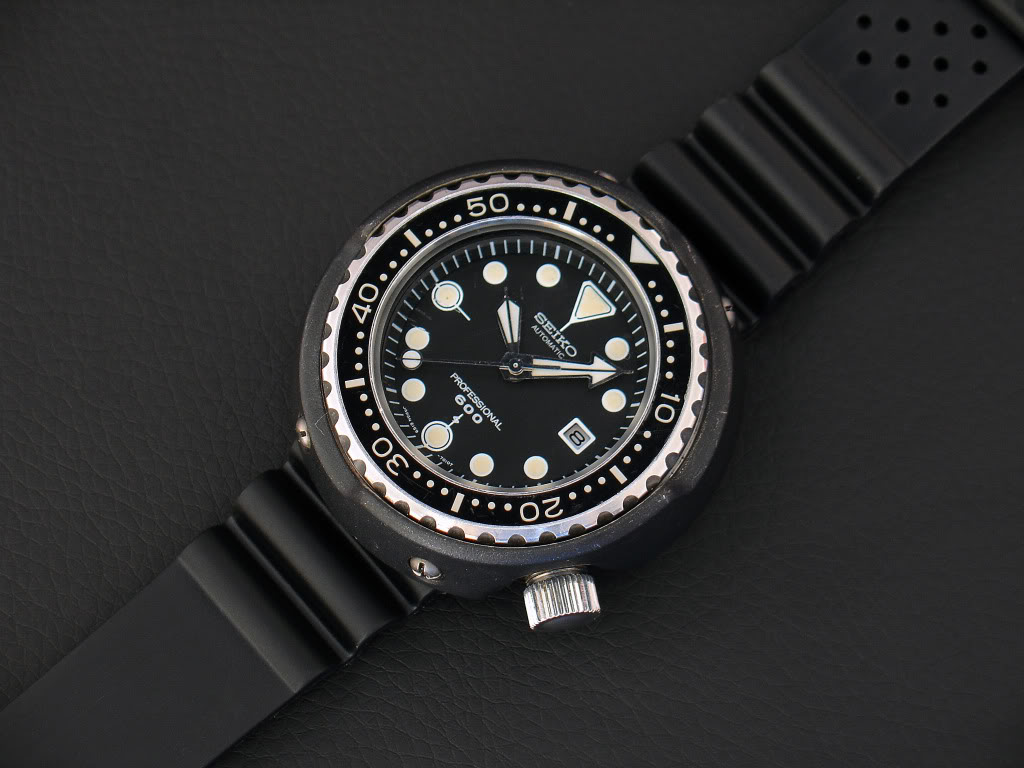 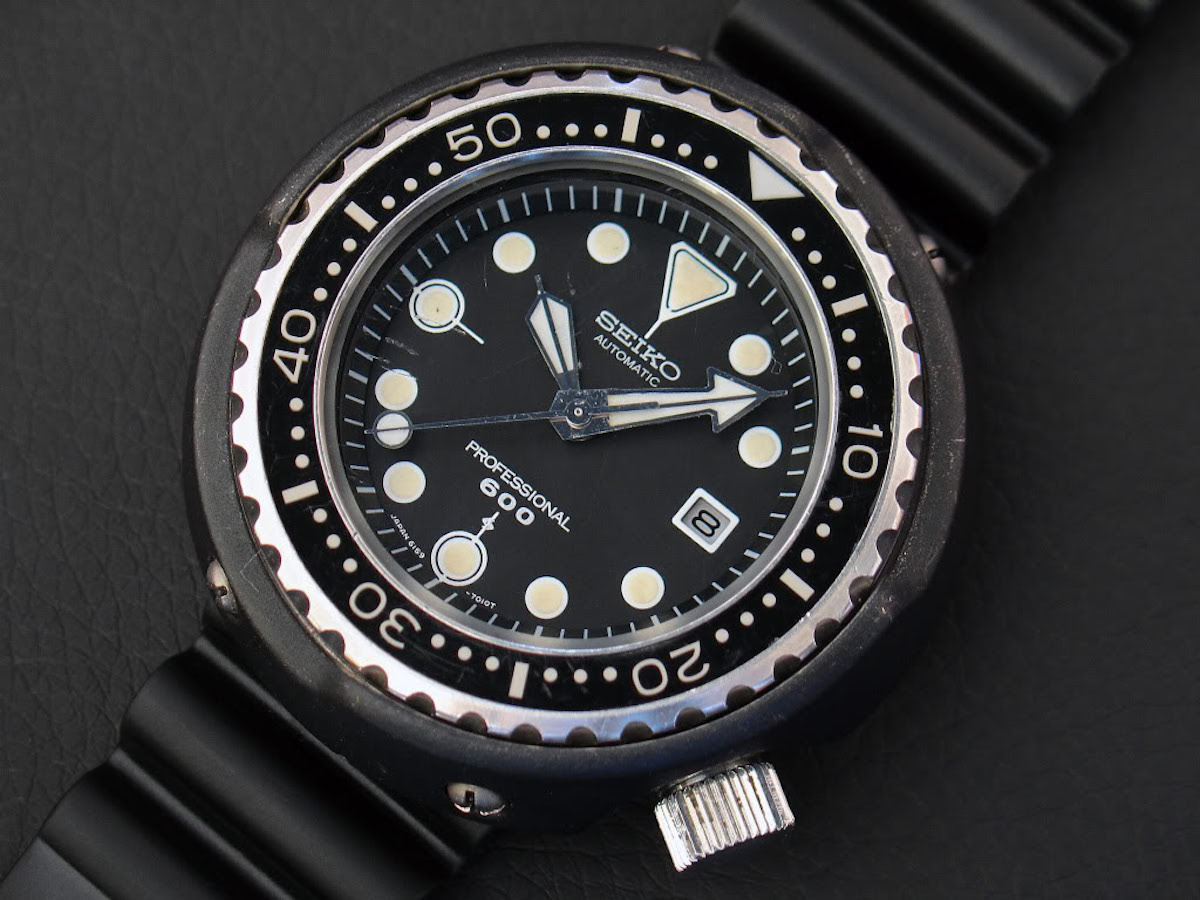 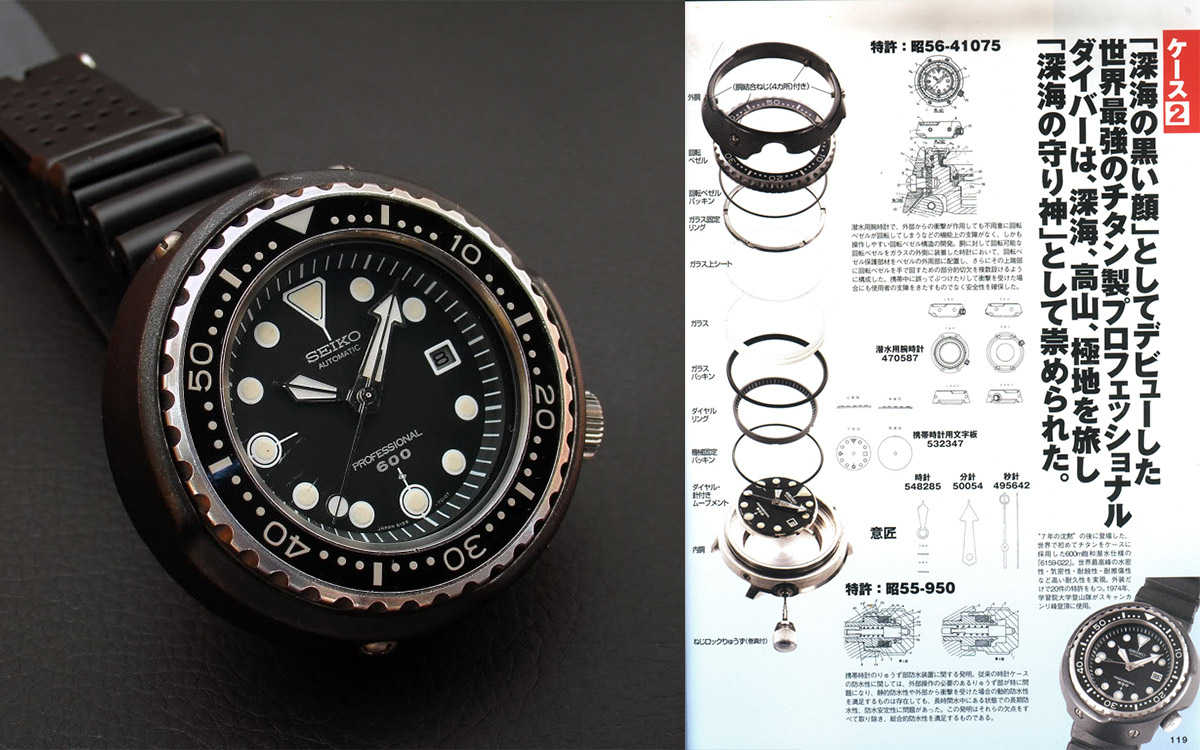 The first Seiko Tuna was a BIG watch (51mm diameter) and its peculiar shape makes it a very difficult watch to comprehend. It was and continues to be a tool, a purpose-built watch designed with professional uses in mind. After three years, Seiko introduced the first quartz powered Tuna (ref. 7549-7009) which had a nitride plated titanium case and a titanium powder-coated shroud in order to minimize scratches during hard use. This material (nitride plated titanium) had a characteristic gold tint – a watch that Seiko aficionados named later the Golden Tuna. For many, the choice of a quartz movement is now considered as a downgrade. However, at that time Quartz was not (yet) cheap. Secondly, by moving to a quartz movement, Seiko increased accuracy and resistance, as this technology is more resistant to shocks than automatic movements. This Seiko Golden Tuna ref. 7549-7009 was a little smaller at 48mm but continued to have the hard-core character and design of its automatic sibling. In early 1986, Seiko introduced the ref. SBDS018 (or ref. 7C46-7009), with an increase water-resistance, now at 1000m. The movement was also upgraded to the great 7C46, with a 5-year battery change interval – a movement that is still used in actual Seiko Tunas. 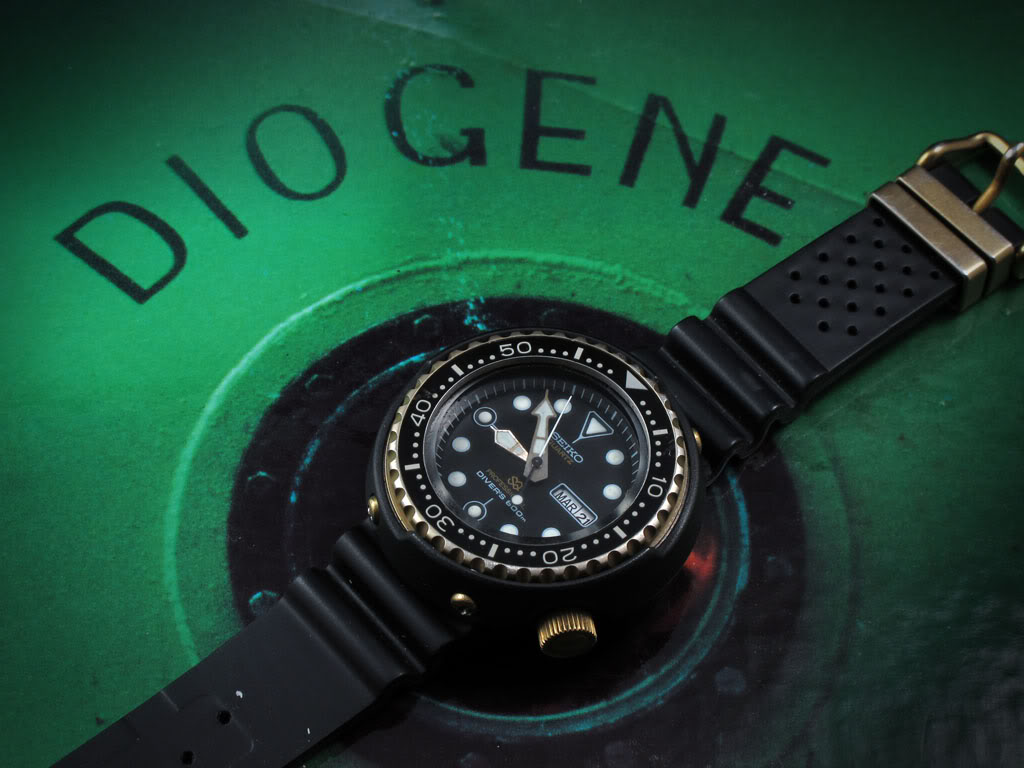 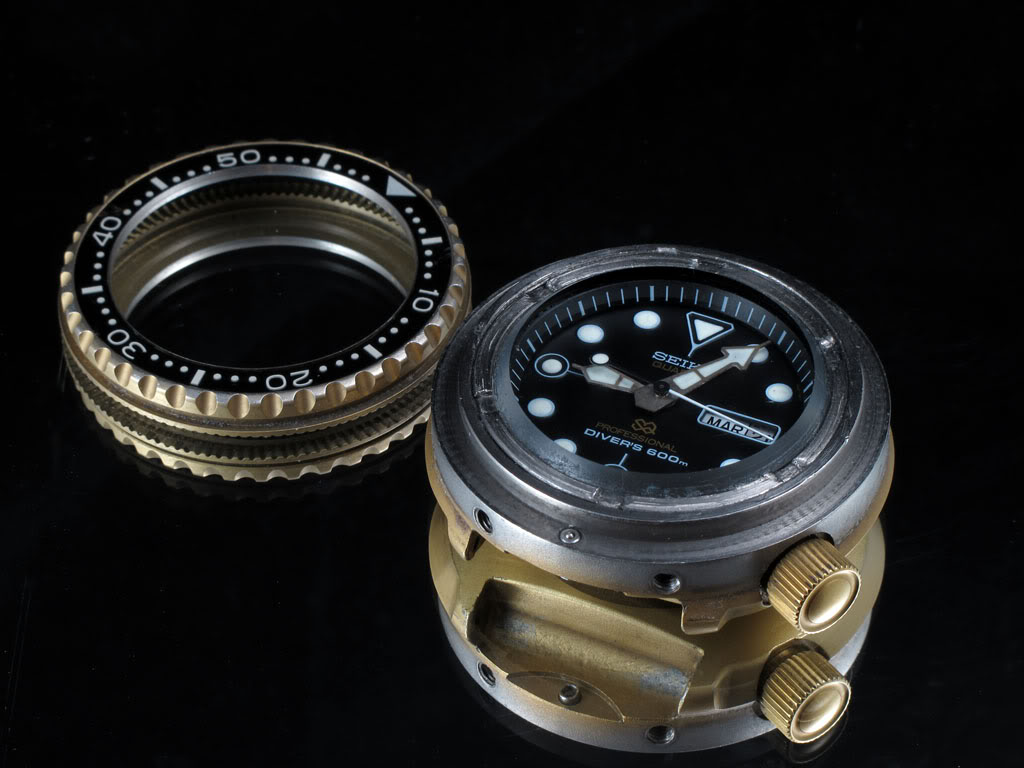 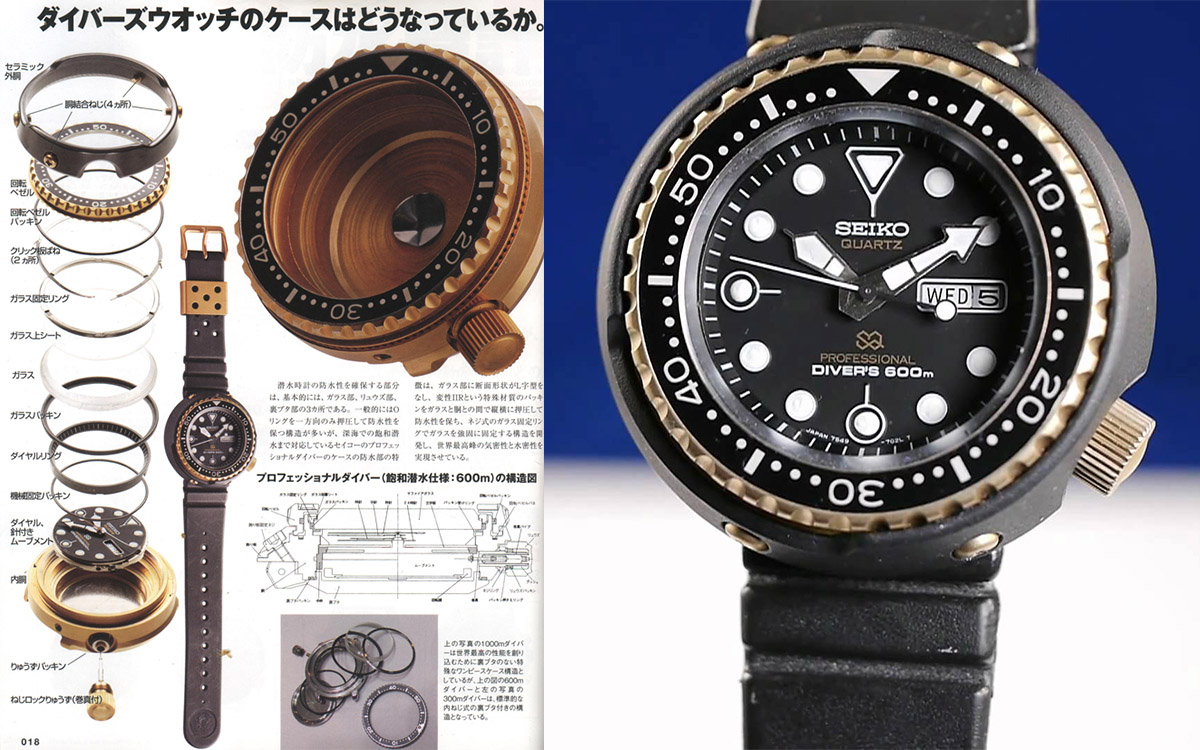 A few years later, the Golden Tuna changed yet again. With the Ref. SSBS018, Seiko updated the dial, the bezel, the strap and the caseback. Styling and materials used remained however exactly the same. The ref. SBBN011 – the Seiko Darth Tuna as called by fans – came later on the market later and this time, it was a full stylistic overhaul. The titanium nitride coating and the characteristic golden color were replaced by an all black look coming from DLC-coated titanium (Diamond Like Coating). This model had a ceramic shroud, Hex screws, different font, and finally, a different dial. Its successor was the ref. SBBN013 – the Seiko Tuna, which we will review in our coming article. It has a different dial with Marinemaster stamped and a singed crown. 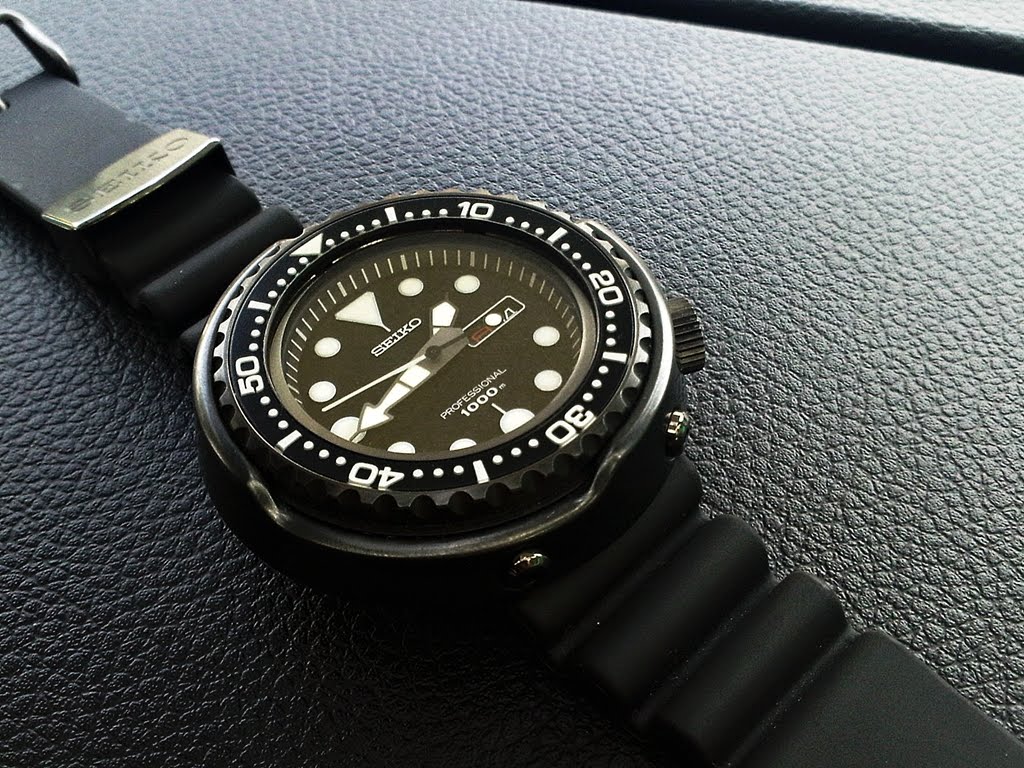 In parallel with the Golden Tuna lineage, Seiko paid tribute to the first mechanical model produced in 1975. In 2000, Seiko produced in a limited edition of 1,000 pieces, the ref.SBDX005, which shared the ethos of the iconic ref. 6159-7010. The Seiko SBDX005 Historical Collection carries on the 6159-7010’s legacy, with the same manufacturing and design standards but with an updated movement. The 6159 calibre was long gone and instead Seiko placed their excellent 8L35 calibre as a substitute. This calibre was a (slightly) downgraded edition of the Grand Seiko 9S55 – undecorated and unadjusted but still a very nice piece of horology. Sturdy and reliable, with a power reserve of 50 hours, it beats at 28,800vph and has 26 jewels. It’s fair to say that, with the introduction of the SBDX005, Seiko caused a massive stir. Because of its mechanical heart and its limited production, this model is extremely difficult to find and even more expensive (and collectible) than the original 6159. Nine years later, the Japanese team decided to introduce a regular production mechanical Tuna, the so-called Emperor Tuna (the reference SBDX011). This massive 52mm x 17.4mm Marinemaster watch shares the styling clues of the Darth Tuna (all black, DLC-coated Titanium) and features the 8L35 calibre. It remained in production up to this year when Seiko revamped its entire line of its professional (Prospex) divers – introducing at the same time the Seiko Marinemaster 1000m Emperor Tuna Rose Gold SBDX014, for the 50th anniversary of dive watches by Seiko. 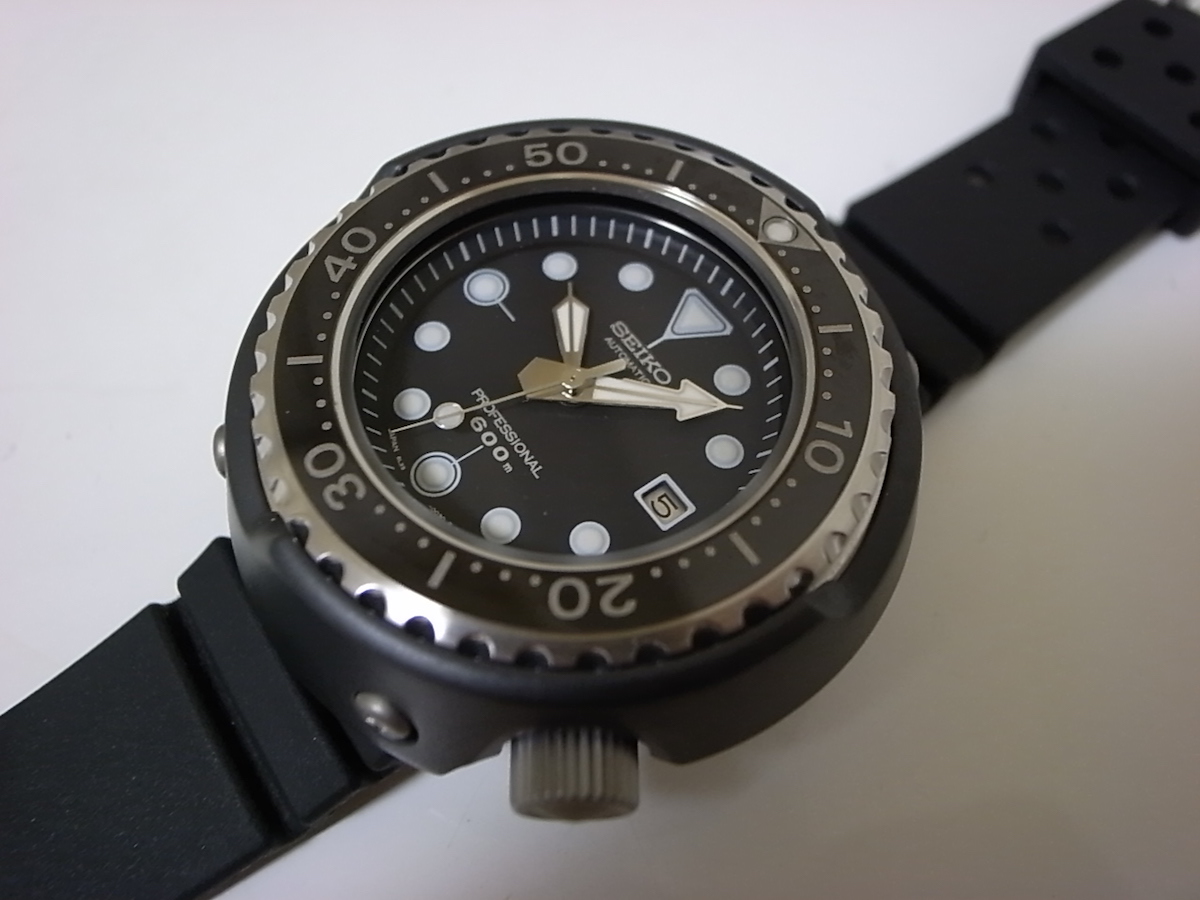 Last but not least we will refer as well to the 300m Tunas. They were smaller and thus, more comfortable on the wrist. Their starting point was in the late 70’s with the ref.7549-7010. These small Tunas had lugs, curved hardlex crystals, and something totally different from the previous construction, a caseback! Obviously they were in a category below their professional monocoque brothers but they were cheaper, easier to service but still tough as nails. In the early 2000’s Seiko replaced the -7010 series with the ref.7C46-7011 or ref.SBBN007, which remained a staple in the Tuna lineage up until its replacement a few years later by the ref.7C46-0AC0, which came in two versions, the SBBN015 and the SBBN017. The -17 was exactly the same as the 007 except from a blasted steel shroud, a signed crown and the Marinemaster lettering on the dial, while the 015 had a bezel with a black insert and the shroud was brushed. Both were replaced this year. 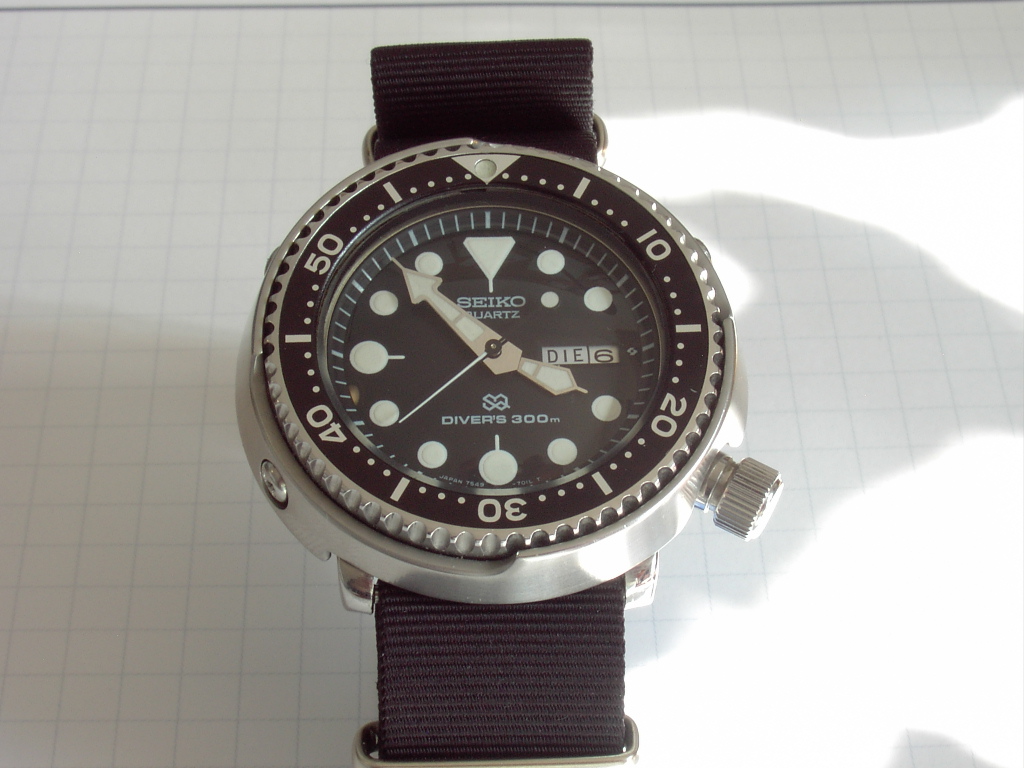 Therefore, the Seiko Tuna-Can diving instrument came in three flavours. The Big, some say huge, Automatic versions, the golden and later DLC quartz monocoque versions and the 300m smaller Tunas. For me, each choice has its pros and cons. The Automatics are big, therefore not the easiest watches to be used as desk divers (well, that is clearly not their purpose), the Golden and DLC editions are battery-operated – and some don’t like this whole quartz thing in their watches. The 300m versions are great, affordable, solid and possibly the perfect everyday quartz dive-watch – however they don’t have the same aura as their bigger brothers. On a nutshell, I think that the Seiko Tuna is probably the definition of the purpose-built watch and in my humble opinion, it is one of the top-5 dive-watches of all time.

Stay tuned, as next week, we’ll continue this journey with the Seiko Tuna with an in-depth review of the Seiko Prospex MarineMaster 1000m ref. SBBN013.

All photos sourced from the web, all rights reserved to their owners.