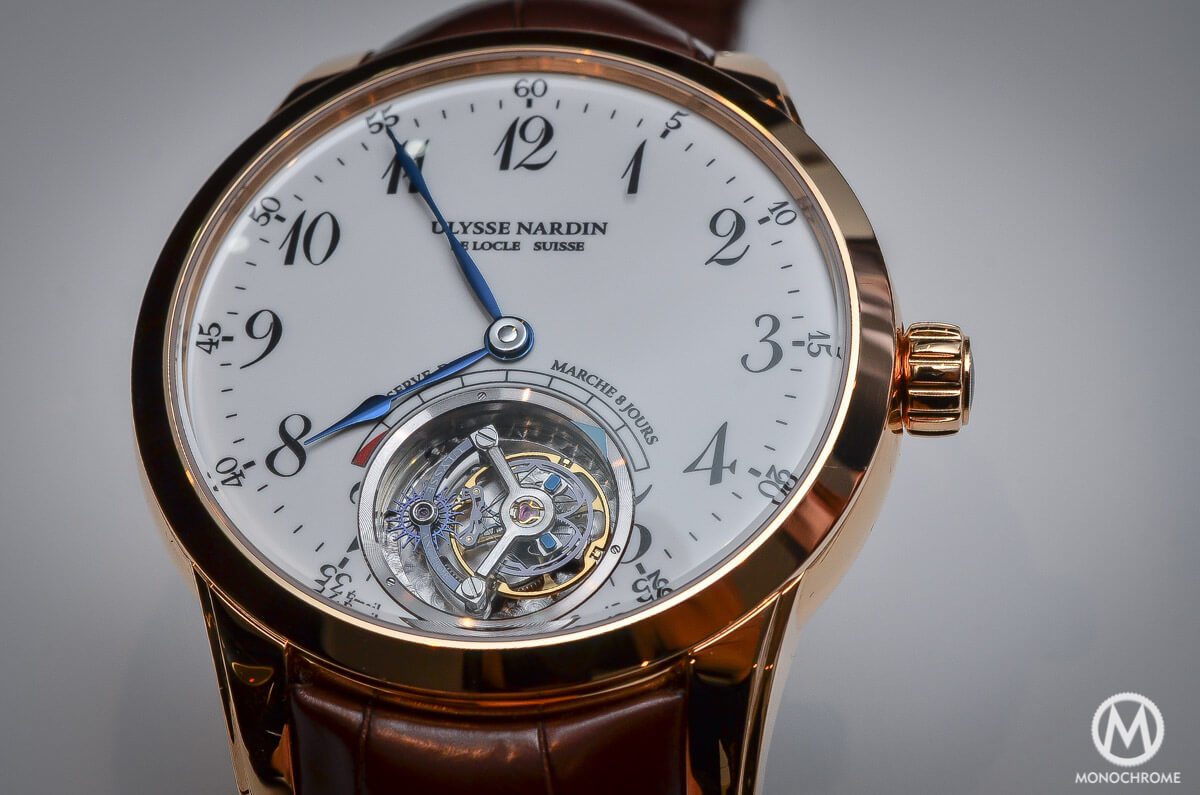 Here is something you might not know: Ulysse Nardin is one of the major innovator of the market. You’d probably think the manufacture does great marine chronometers or funny erotic watches. However, there is much more to see in the R&D office of Ulysse Nardin: the use of silicon for an escapement wheel for the very first time, the first test of a diamond balance spring or the first manufacture to fit a watch with a diamond escapement. This research team is, for sure, productive – and they did again last year while showing us the first prototype of a brand new constant escapement, the Ulysse Anchor Escapement. As promised, here is the first commercialized watch to feature this innovation. Say hello to the Ulysse Nardin Anchor Tourbillon.

If you step back and look at the past 15 years, you’ll see that one of the most innovative manufactures had undoubtedly been Ulysse Nardin. Why? First and certainly main of the innovations credited to UN: the use for the very first time in 2001 of silicon in a watch – into the movement of the Freak, a shocking watch for several reasons, as the design was totally unusual, the display too (the carrousel tourbillon movement is used to indicate the time) but mainly because of the introduction of a material that was, at that time, a game-changer. UN featured a silicon escapement wheel into the Freak, a material that the (almost) entire industry felt like an enemy, something that didn’t belong to the world of high-end watchmaking.

However, if you look at the recent developments of the watchmaking industry, you will certainly notice that many brands are now relying on silicon to create balance wheels, hair-springs, escapement wheels or pallet forks. Almost the entire production of Omega is now fitted with such elements. Same goes for Breguet, Blancpain or Rolex (in some of the movements). Even conservative brands such as Patek Philippe experienced it. Saying that silicon is now common and that it could be the norm for high-end watches in the next decade is kind of an understatement. That’s not a trend anymore. Ulysse Nardin was a game-changer and set new rules.

Let’s move straight to 2012 and to another manufacture: Girard-Perregaux and its Constant Escapement Watch – for which we broke the story. The arrival of silicon opened new perspectives to watchmakers because of the way not to machine a material anymore but to grow it. Silicon indeed can be formed and grew from scratch and chemically shaped to virtually any forms, to extremely precise and small dimensions. Girard-Perregaux was the first to create a totally new escapement, with constant force properties in its Constant Escapement watch. Ulysse Nardin could well be the first to implement this technology in a watch that can be sell – and not just being a commercialized prototype. We showed you the prototype last year, here is now the final edition of the Ulysse Nardin Anchor Tourbillon.

How does the Ulysse Nardin Anchor Tourbillon works? 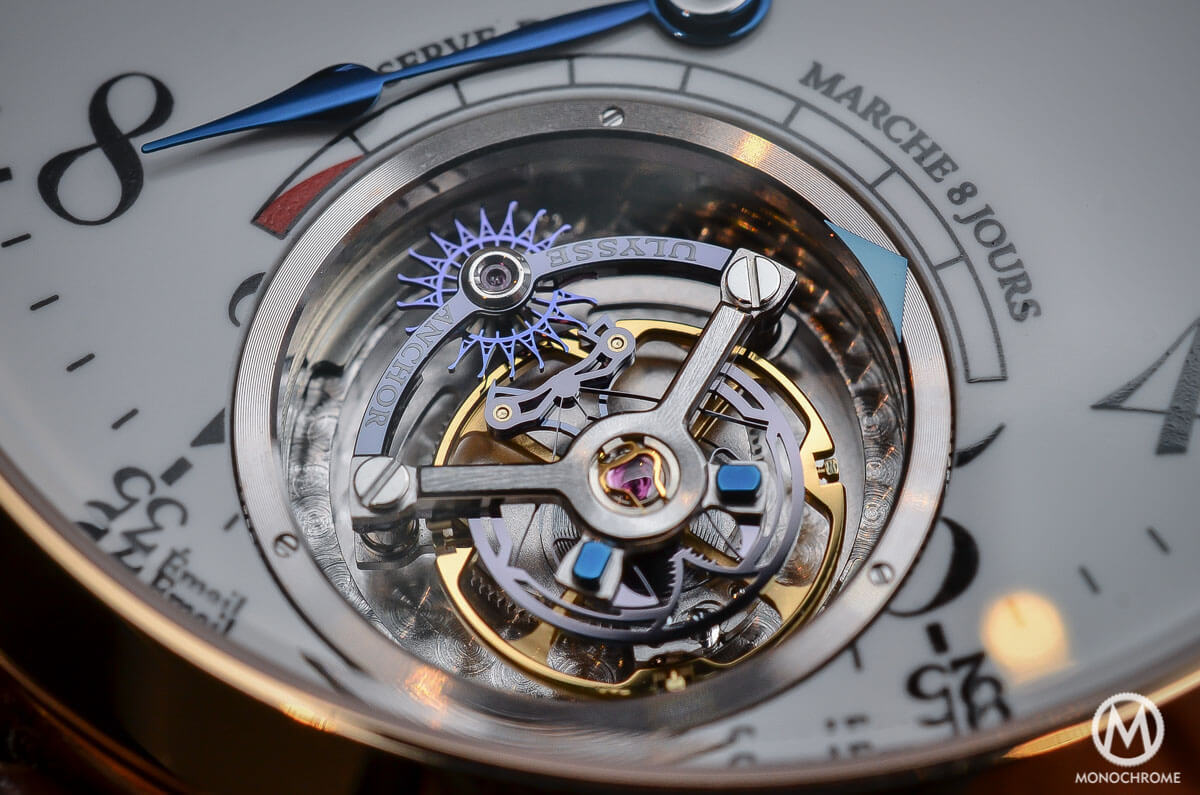 Like Girard-Perregaux’s Constant Escapement, the Ulysse Nardin Anchor Escapement (that we can find in the Ulysse Nardin Anchor Tourbillon) is made of silicon and relies on the flexible properties of this material. Why using silicon? It is hard, light, not sensitive to magnetism (thus anti-magnetic), and it doesn’t require any lubrication. Especially in the regulating organ the need for these properties is the highest, and therefore silicon is being mainly used for parts of the escapement. And maybe the most important factor is that silicon can be produced to an extreme precision, making it very eligible for the escapement components.

While the traditional principle of the Swiss lever escapement uses a balance wheel, an escapement wheel and a lever with pallets, the Anchor Escapement of the the Ulysse Nardin Anchor Toubillon features a circular silicon frame in which the pallet arms are suspended by two buckled blades that are – curved under tension – one perpendicular to the other. It relies on the physical properties of of blade springs to bend along one axis, while remaining perfectly rigid along other axis. This reproduces the kinetic function of a pivot. 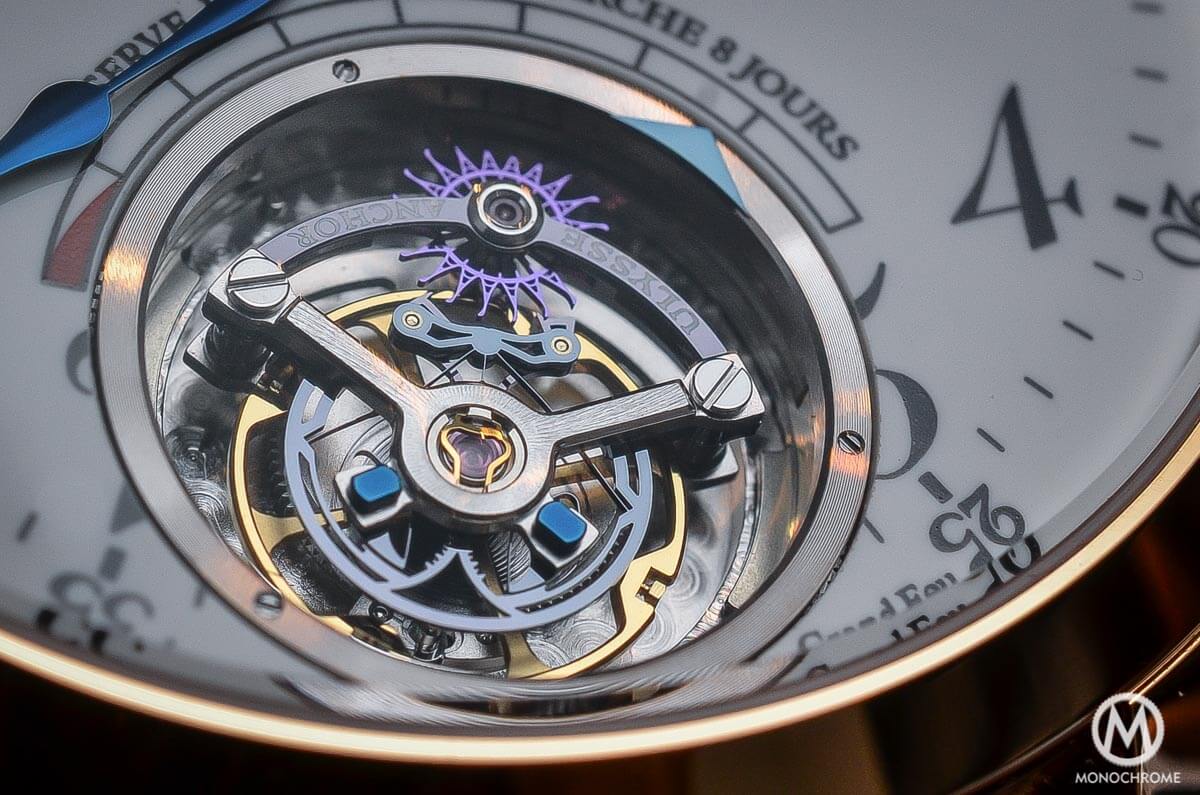 While the GP Constant Escapement comprises a blade that is fitted in a rather large framework that arches across the balance and escape wheel – thus requiring a watch developed entirely around this escapement module – Ulysse Nardin’s solution relies on blades that are part of a compact frame that is fitted on top of the balance wheel. In fact, it looks like the Anchor Escapement can replace an ordinary Swiss lever escapement without dramatic changes to the rest of the movement, and that makes it much easier in application, even in already existing watches. 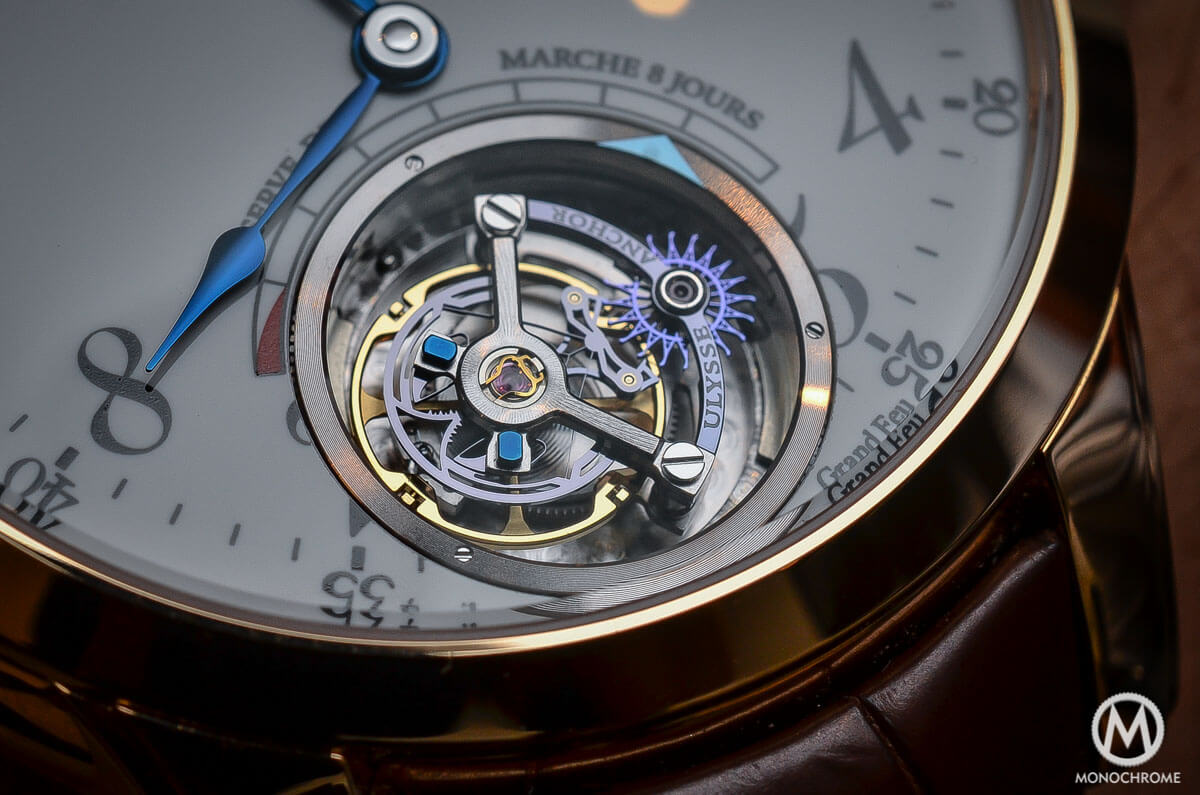 The impulse, given at each semi-oscilation of the balance, transmits its energy to the blades, which snaps from one stable state to another, very much like a snap hair clip. The pallet arms, here without a pallet staff, thus pivot from side to side without generation friction. In fact, when it returns to its original position, it gives back its stored energy with virtually no loss, creating a possibly constant force on the escapement (and thus meaning a (virtually) constant rate of the watch over the full range of the power reserve). Last but not least, this construction needs no bridge for the pallet lever, allows for a slimmer movement.

The solution created by Ulysse Nardin could well be the one to get rid of more than 100 years of classical Swiss Lever escapement – the same that we can find in our grand-father’s pocket watch or in your modern Rolex Submariner. Innovation is not always good and the use of a traditional escapement in watches for a century can be explained by its reliability, its capacity to be easily adjusted and by its rather good precision. Changing this mechanism is a challenge but it seems that Ulysse Nardin opened (again) the doors to new perspectives with a compact mechanism and that does not require a fully adapted watch and movement. 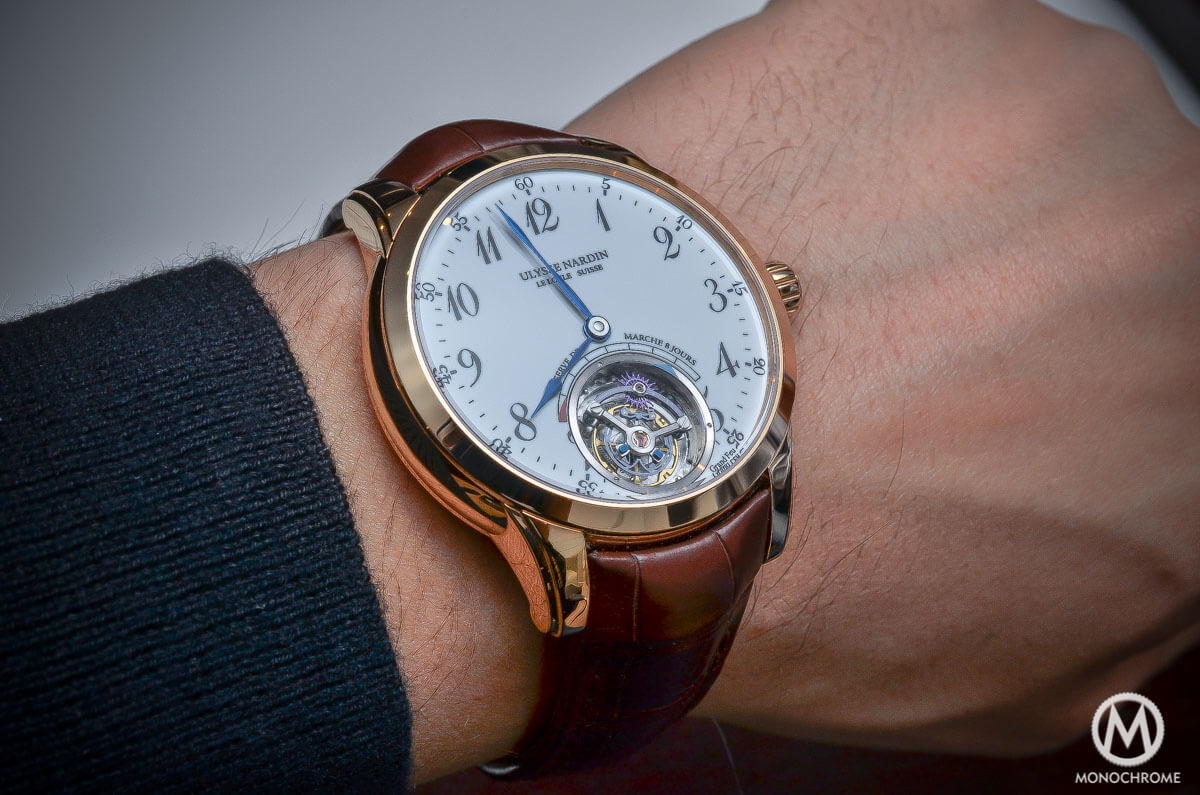 As innovative the Anchor Tourbillon can be, you’ll be surprised to see that Ulysse Nardin didn’t choose the same shocking approach than with the Freak but instead they chose to be as close as possible from traditional high-end watchmaking. Every aspect from the round and elegant case, the blued hands, the enamel dial, the antique numerals or the movement shaped like a marine chronometer are reminiscent of traditional horology and thus creating a voluntary huge contrast with the innovative escapement module – a sort of pre-answer to the future comments that could say “ok, we have an innovation, we removed the traditional swiss lever escapement but we’re making classical high-end watchmaking”. 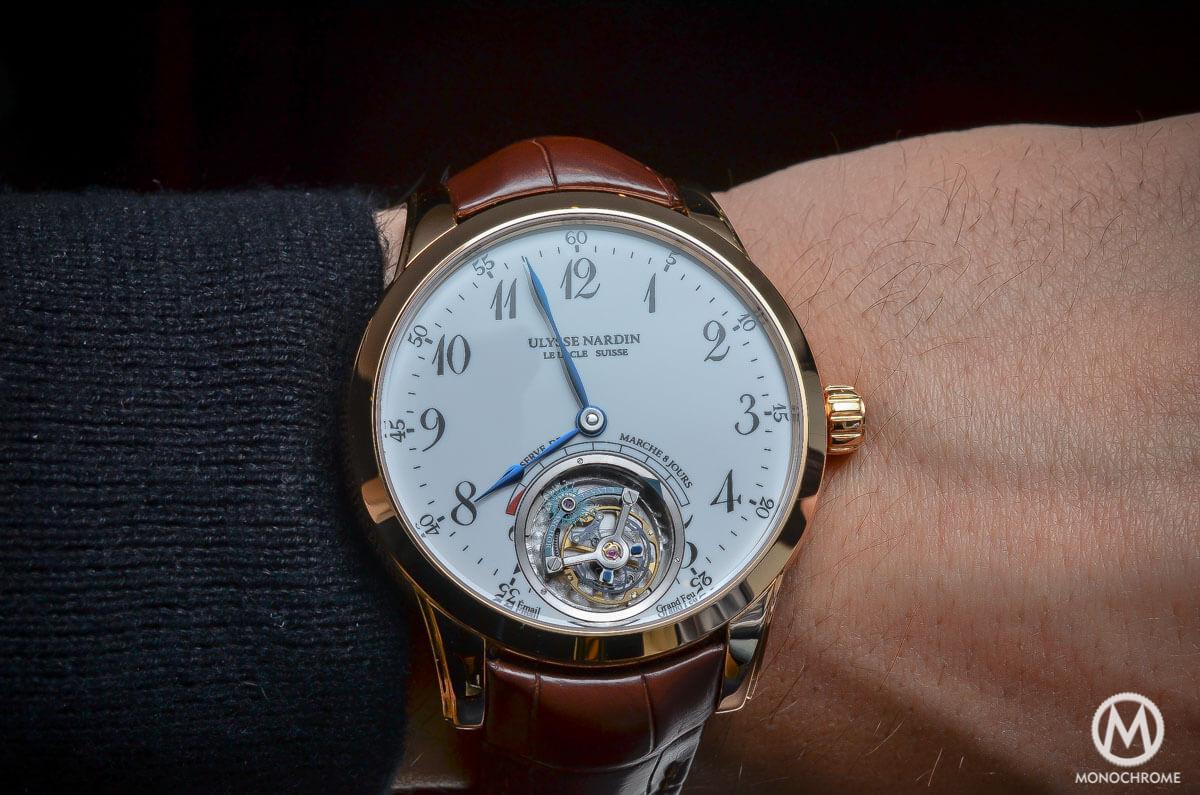 This watch features an elegant and simple round case, measuring 44mm and shaped like the rest of the Classico collection, like for example the Ulysse Nardin Stranger. It comes with a full mirror polishing. This classicism can also be felt on the dial. Ulysse Nardin also chose to be traditional with a white grand-feu enamel dial, thermally blued hands and ancient numerals for both the hour and minute tracks. 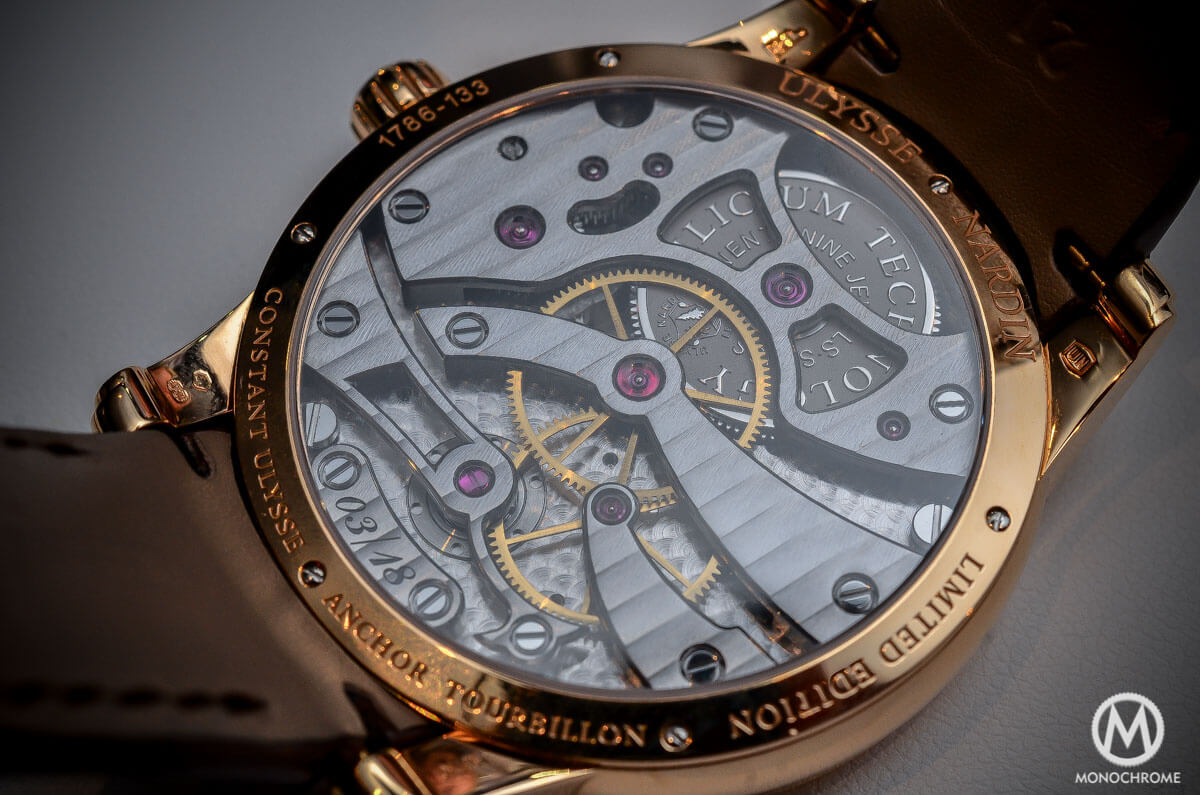 When turning back the watch, let us have two comments, the first one concerning the superb finish and the second one concerning (again) the huge contrast between the elegance and classicism of the shapes and the innovative spirit. The movement of the Ulysse Nardin Anchor Tourbillon feels like an old marine chronometer, with large and curved bridges and huge wheels. Again, it seems that Ulysse Nardin wants to demonstrate that its new Anchor Escapement isn’t disruptive. It can be applied on the most traditional movement possible and not only into concept watches.

This movement is finished with polished bevelled angles, fine circular graining on the main plate, Geneva waves on the bridges and an engraved barrel. We can even find some internal angles on the bridge that holds the back of the tourbillon – and those are finishes that can only be done by hand. This large movement features a one-minute tourbillon that beats at slow 18.000 vph. It boasts 8 days of power reserve, thanks to a double barrel. 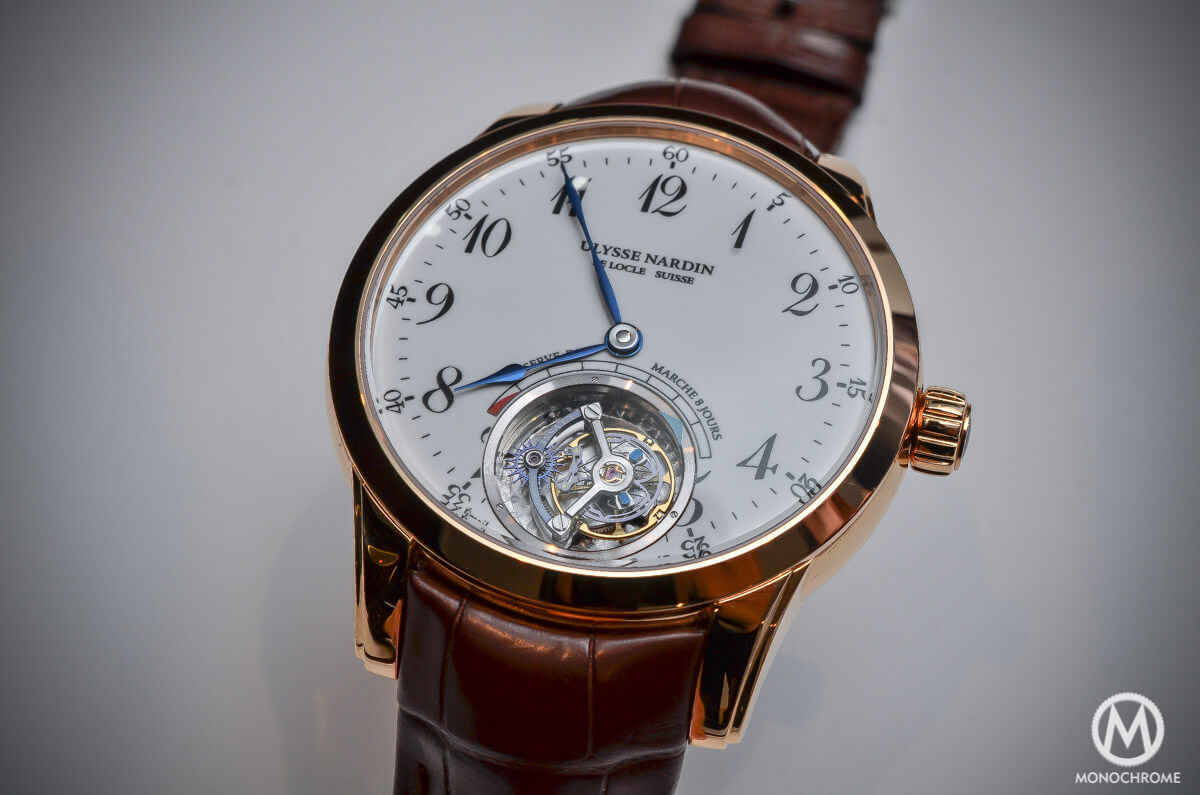 This new Ulysse Nardin Anchor Tourbillon is truly interesting for several reasons. First, it seems to be one of the first attempts to get rid of the swiss lever escapement that could be implemented on a larger scale. Then, it brings a constant force mechanism that is compact enough to be applied in normal watches and not only in concept watches – something that Ulysse Nardin truly wants to demonstrate with a very classical execution of the case, the dial or the movement. Thus it opens the doors to several new developments meaning that we could see more watches with the anchor escapement soon – with or without tourbillon. The strength of this innovation could well be its adaptability.

Now comes the question of the reliability and of the accuracy. We know that these types of escapements are extremely hard to adjust (mainly because traditional tools can’t be used) and achieving a chronometer rating is potentially a nightmare for watchmakers. We also know that the ‘real constant force‘ is a proper challenge to achieve and many of the past solutions failed. For these two questions, we don’t have yet the answer and only a long term review could let us know.

Final question: the price. Look back at the article, review the features, the innovations, the fact that it’s a very limited edition, the 18k white or 18k rose gold case, the enamel dial… You could easily expect 150.000 + for an example of this timepiece. For once, we have to admit that the retail price decided by UN is justified, as it will be 84.000 Swiss Francs (for the 18 pieces in rose gold) and 88,400 Swiss Francs (for the 18 pieces in white gold). We know lots of simple tourbillon watches priced way above that. Deliveries will start this May 2015.