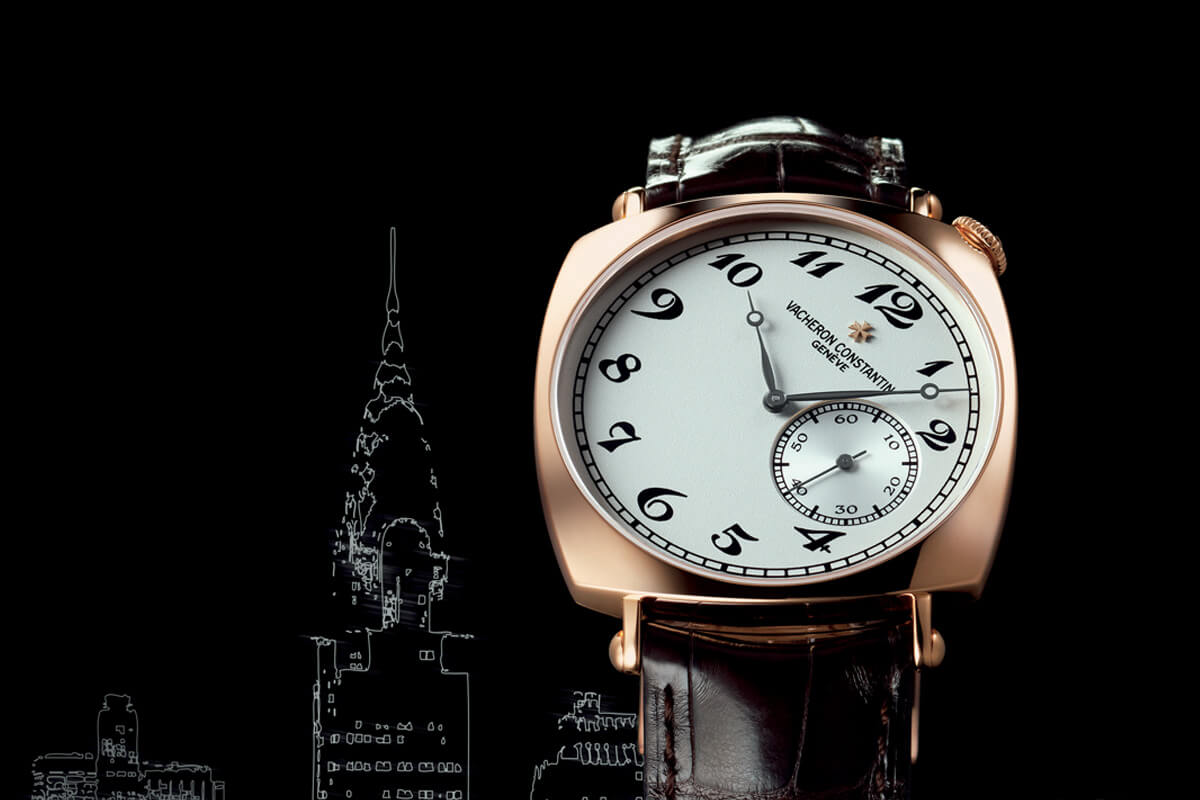 The Vacheron Constantin Historiques American 1921, an updated version of a classic timepiece from the heyday of Art Deco, made exclusively for the North American market, inspired the brand’s new Harmony collection, the cushion-shaped timepieces introduced during the SIHH 2015. To understand where Vacheron Constantin found the inspiration and to discover the roots of the manufacture, here is the full review of one of the most beautiful yet original Vacheron Constantin made with our colleague of WatchTime.

The Roaring Twenties bridged the gap between the end of World War I and the beginning of the Great Depression. As the United States economy boomed, a prosperous citizenry sought new pleasures and pastimes. It was an era of cultural breakthroughs and upheavals: jazz emerged on the music scene, Europe’s Bauhaus and Art Deco movements influenced art and architecture, “talkies” replaced silent films on movie screens and more and more Americans owned automobiles. The U.S. had firmly established itself as the world’s leading economic and social power.

The decade’s luxurious excess was also reflected in its watches. Only a few years before, timepieces first migrated from vest pockets to wrists. Wristwatches had barely arrived on the scene when they experienced their first stylistic flourishes: cases shaped like rectangles, cushions, barrels, trapezoids and other geometric shapes became popular, expressing the mood of an optimistic era. During this time, Vacheron Constantin produced a small edition of eccentric wristwatches exclusively for the North American market. The movement inside each pillow-shaped case was turned 45 degrees so that the crown was at the top corner of the case, and the subdial for the seconds was positioned along the extension of this axis. Vacheron made two versions of this watch in the early 1920s: the movement was turned counterclockwise in one and clockwise in the other. Both of these models influenced the design of the Historiques American 1921 model, launched at the end of 2008. Its dial design comes from the first model, while the positioning of the crown (and thus also of the movement) comes from the second. Both vintage models were manufactured in extremely small numbers — according to Vacheron’s archives, only 12 units of each — and the few surviving pieces are avidly sought collectors’ items that appear only very rarely at auctions. One was on the block at an Antiquorum thematic auction in 2005, Vacheron Constantin’s 250th anniversary year. When the hammer fell, this exclusive timepiece changed hands for more than 70.000 Swiss francs (at the time, about USD 58.300). 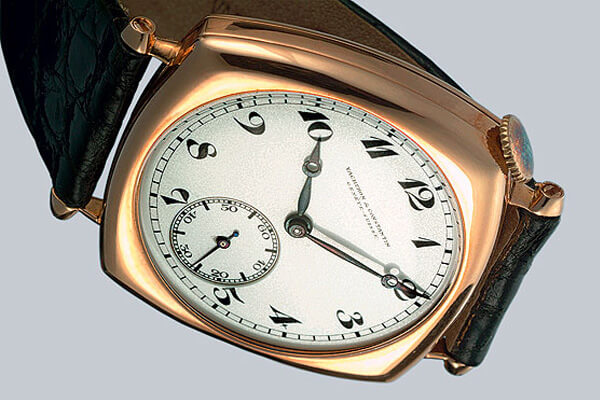 Movements with a twist: the American 1921’s predecessors (above and below) debuted in the Art Deco era.

The American 1921 is part of Vacheron Constantin’s Historiques collection, which presents modern versions of distinctive watches from the firm’s 254-year history. The line was established in the 1990s, discontinued in 1998, and then relaunched in 2005. In each year since, Vacheron has added a new watch to the collection. The American 1921 is the third in the series, following on the heels of the Toledo 1952 and the Chronomètre Royal 1907.

The small-seconds subdial on the American 1921 is positioned at 3 o’clock, which would correspond to 4:30 on a traditional dial. Unlike its predecessors, which used a Lépine movement with the small seconds and crown co-linear, this model contains a hunter caliber with the small seconds and the crown forming a 90-degree angle with the center of the dial. At first glance, this seems to be the most striking difference between the new edition and its predecessors. 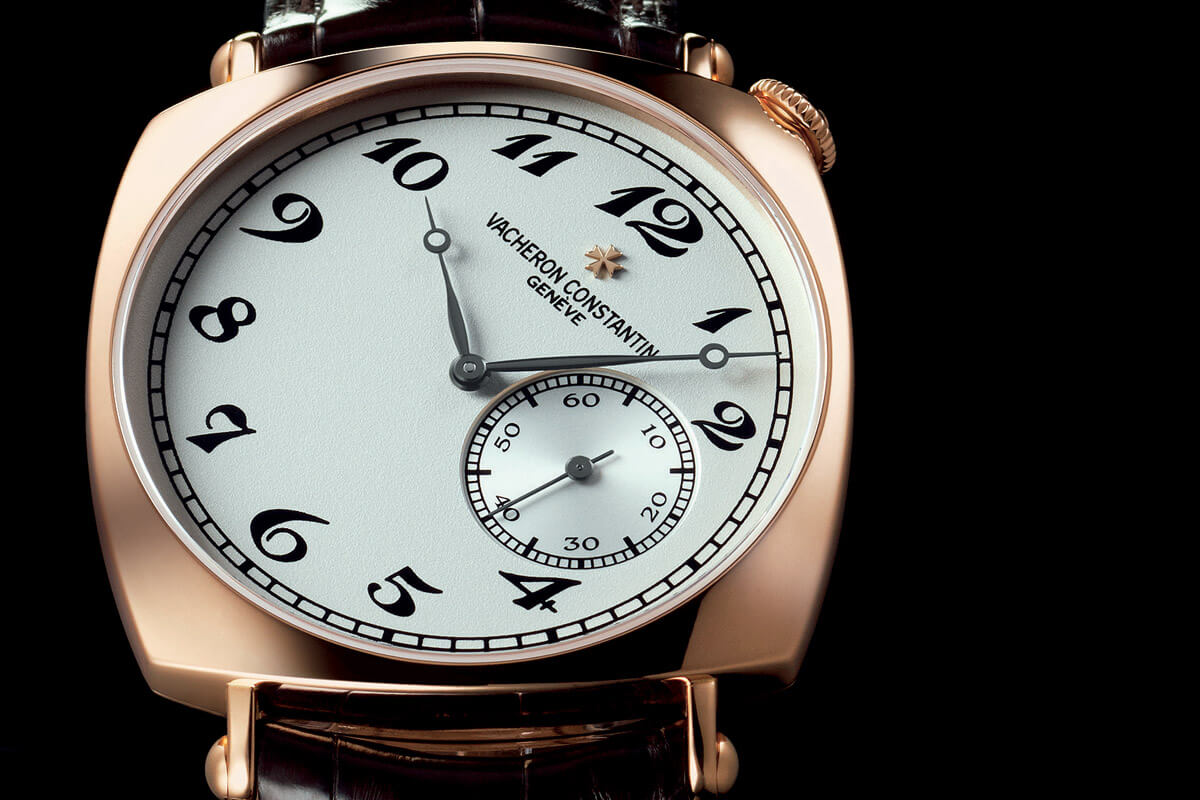 On closer inspection, greater differences become apparent, some of which are obvious improvements. The new Breguet hands of black oxidized gold with half-moon eyes are even more finely crafted than were their 1920s counterparts. The numerals applied to the dial’s surface are somewhat bolder. As for the dial itself, whether the modern version’s sandblasted, silver-plated metal one is an improvement over the vintage model’s enamel one is strictly a matter of taste. The new version surely boasts greater longevity and is much less delicate. All of this underscores the self-confidence of the watch’s designers, who opted not to slavishly reproduce the face of the original watch. 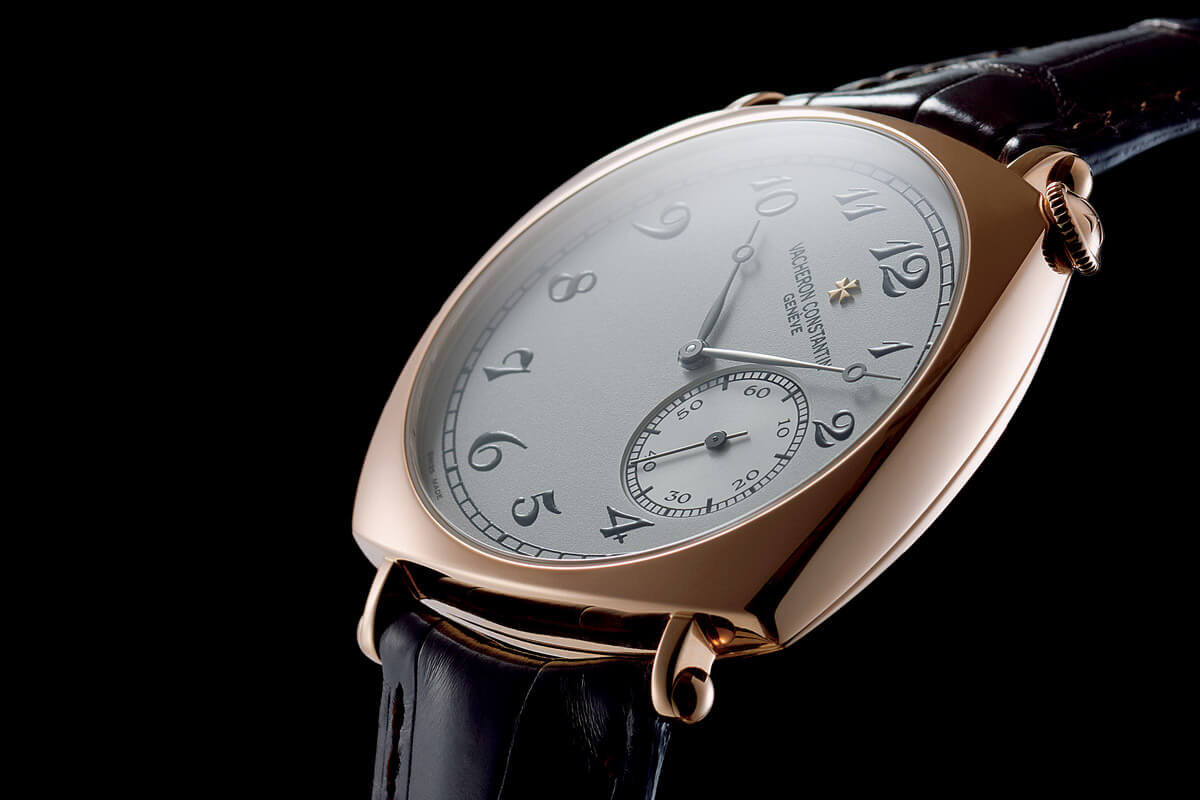 Giving the movement a 45-degree clockwise twist significantly improves the dial’s legibility for people who wear their watches on their left wrist. In this modern computer era, most of us sit with our forearms resting straight across the desktop or with the left elbow slightly bent. When you glance at this watch while in this position, the “12” will be very nearly vertical, which makes reading the time easier. It does, however, take some time to get accustomed to this dial arrangement. One reason is that the seconds subdial is shifted from its usual position at 6 o’clock to a more eccentric position perpendicular to the axis of the repositioned crown. This made it more difficult to read the dial in the testing phase.

Apart from the positioning of the seconds subdial, there is very little to criticize about the dial. Its daytime legibility is excellent thanks to the clear contrast between the dark numerals and white dial. The rich layer of lacquer on the surface gives it an attractive appearance and ideally suits the watch’s overall proportions. Also appealing are the railroad-style calibrated circles that surround the hour numerals and the seconds subdial. None of these beautiful details is visible in the dark, but this was the right decision: Super-LumiNova or similar luminous substances would have taken away from this watch’s vintage-style charm. In any case, the contrast is clear enough that you can still read the time in weak light. 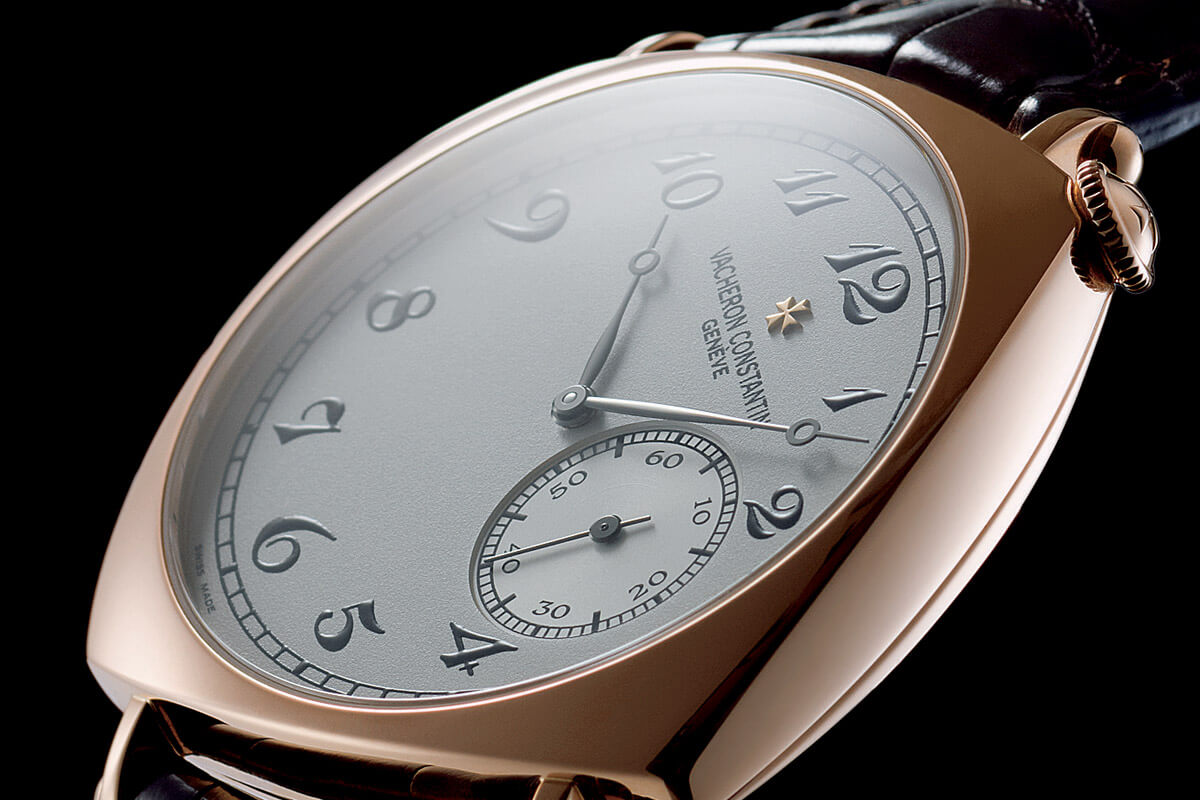 The lightweight, pillow-shaped case feels very comfortable as soon as you put the watch on. Its 87 grams are forgotten moments after you close the pronged buckle with its halved Maltese cross. Well-balanced proportions encounter excellent craftsmanship here. The edges, angles and planes fit so well together that you almost think the case grew naturally into this shape, and was plucked from some horological stem before skillful hands gave its rose-gold body a gentle polishing to smooth its surfaces. The watch is also thin enough to disappear discreetly under the cuff of a shirt and suit jacket — that is, if you’d really wish to hide such a beautiful timepiece.

Not even the oddly placed crown detracts from the superlative wearing comfort. It conforms closely to the corner of the case, where it’s far enough from the back of the wrist that it doesn’t press into the skin. However, don’t try to wind and set the watch while it’s strapped to the wrist: the flat crown is extremely difficult to grasp in this position. It is much easier, though still a bit challenging, to operate once the watch has been slipped off. 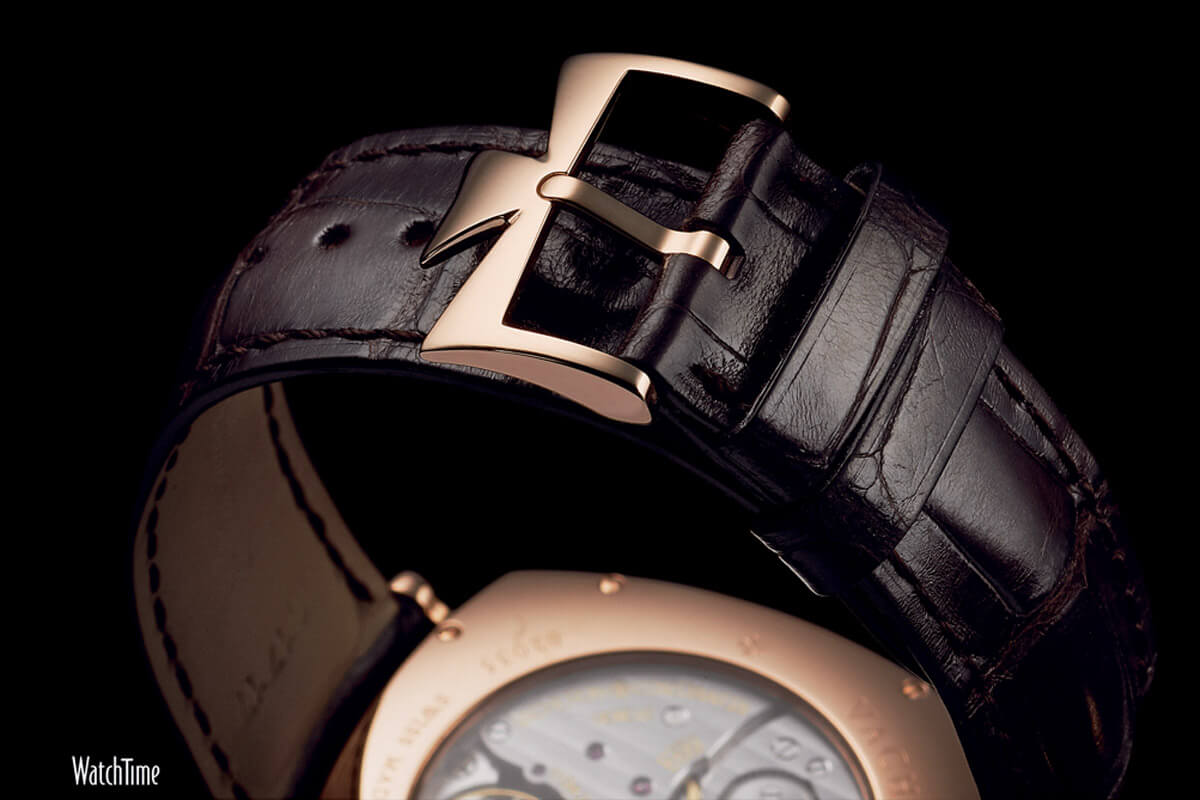 We were pleased to find that Vacheron Constantin animates the beautiful exterior of the American 1921 with an attractive and reliable movement. Caliber VC 4400, which debuts in this model, is a recent addition to the firm’s growing portfolio of manufacture calibers. 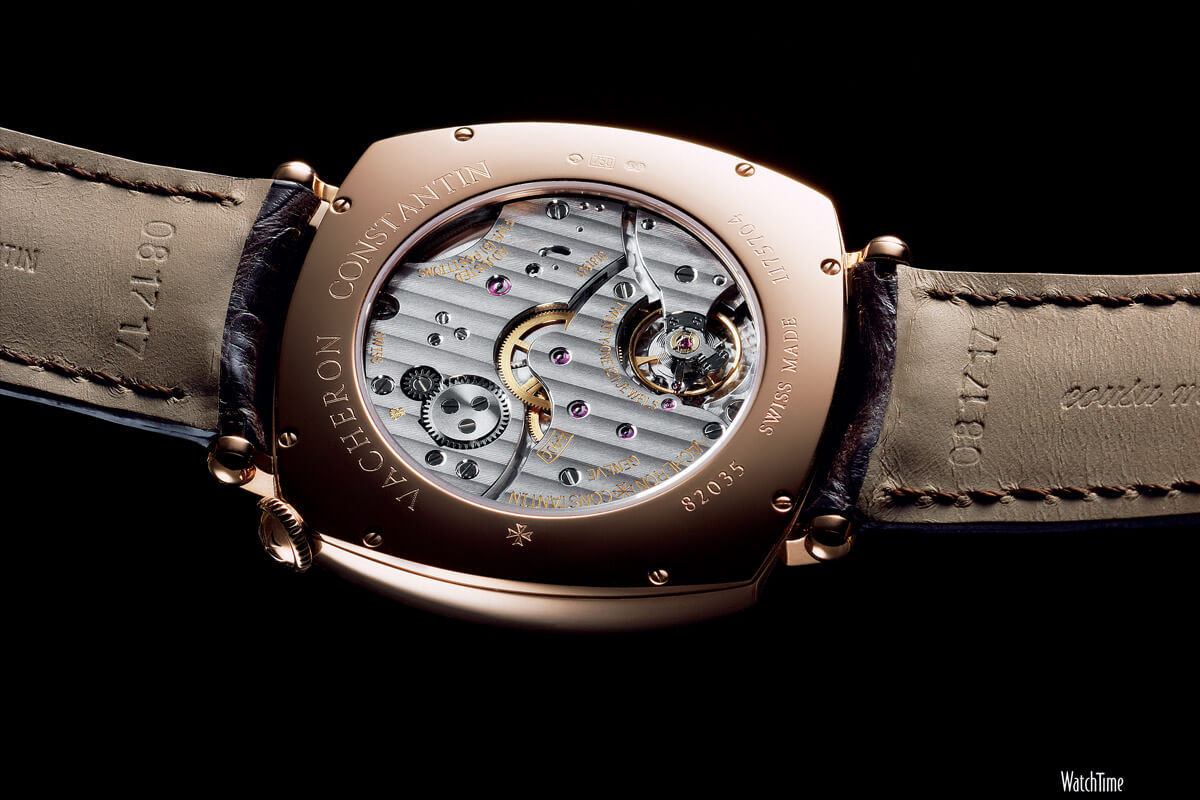 The watchmakers could have made their lives easier when developing this watch. After all, Vacheron’s portfolio already included Caliber VC 1400, a hand-wound movement with an off-center subdial for the seconds, which could have easily satisfied the demands of the American 1921. So why did the designers opt to develop a whole new caliber? Simply put, because size matters. The VC 1400, which is just 20.3 mm in diameter, would have looked lost inside the American 1921’s spacious 40-mm-diameter case. The 1400 is even smaller than the caliber in the original American, Caliber R.A. 11’’’ 62 Nouveau (24.8 mm). The new movement is fully 28 mm in diameter, an excellent fit for a 40-mm case. Its first prototypes had already been thoroughly tested and subjected to continual improvements in 2007, and the result is a stable caliber that’s built to last; its sole shortcoming is its lack of a stop-seconds function. One reason for the movement’s longevity is its use of 25 jewels — eight more than are necessary for a standard hand-wound caliber. The extra jewels reduce the number of potential friction points and ensure that the entire movement runs with greater stability. Caliber VC 4400 is also constructed so that all of the important parts are easy for a watch repairer to access. Vacheron Constantin intends to use this movement as the base for new ones in the coming years. 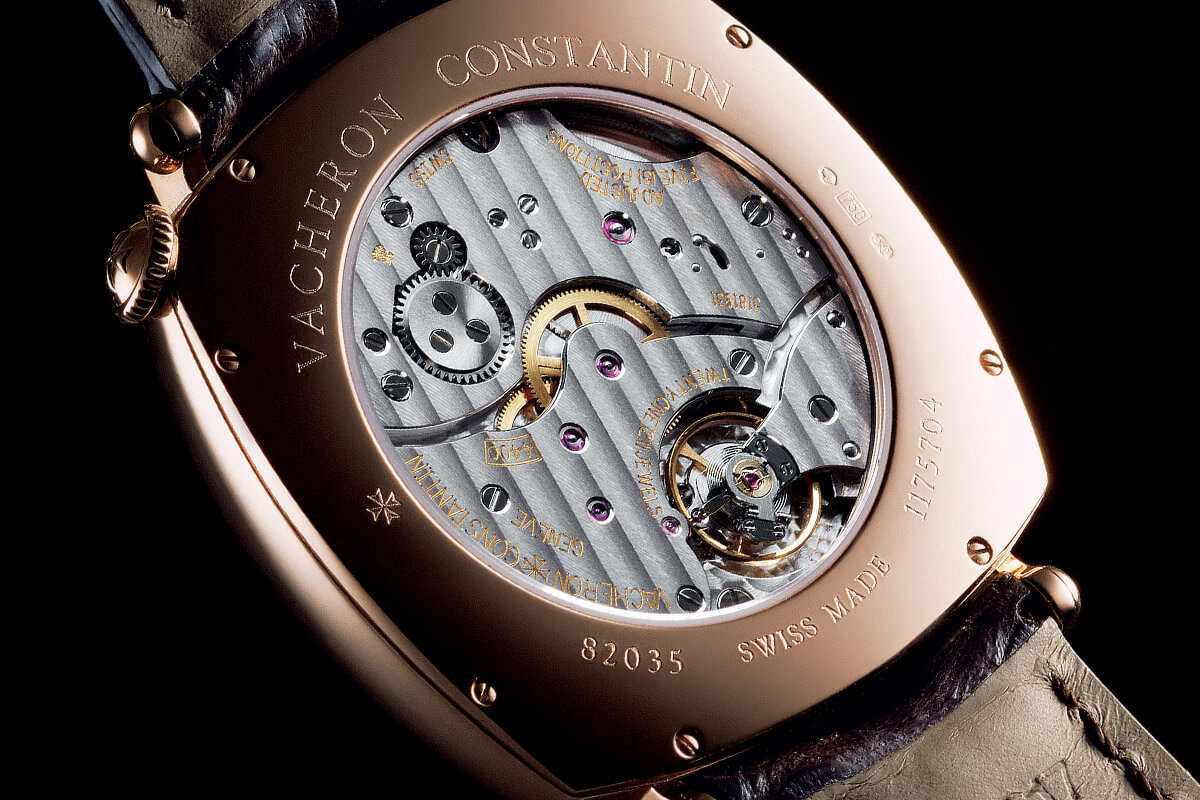 The movement bears the Geneva Hallmark and lives up to all of its high standards of quality. All edges are cleanly beveled, all screw heads are brightly polished, a precisely executed wave pattern creates shiny lighting effects on the bridges and cocks, and meticulously executed circular graining adorns the depths of the plate. After the mainspring has been manually wound, the large barrel of the VC 4400 stores enough energy to keep this watch’s hands in motion for up to 65 hours.

The regulating screws are solidly crafted and highly precise. Fortunately we didn’t have to use them on our tested model, because our test on the timing machine revealed that the watch kept time with an average daily gain of less than two seconds. Those values were slightly higher when the watch was worn on the wrist, but still very impressive: only three seconds’ gain. The timing-machine test found a significant rate difference between timekeeping in the “dial up” and “dial down” positions.

In the areas of both technology and design, the Historiques American 1921 is state-of-the-art. As one would expect, the effort that went into developing such a timepiece has an impact on its price. Vacheron Constantin has priced this model at EUR 34.600, which makes it one of the least expensive in the Historiques collection but still pricier than comparable watches like the Gondolo or Ellipse d’Or from Patek Philippe. The American 1921 is likely to increase in value more quickly than these others, but it would be a pity to regard this watch solely as an investment to hide in a bank vault for safekeeping. This is a beautiful wristwatch that should be worn and admired.