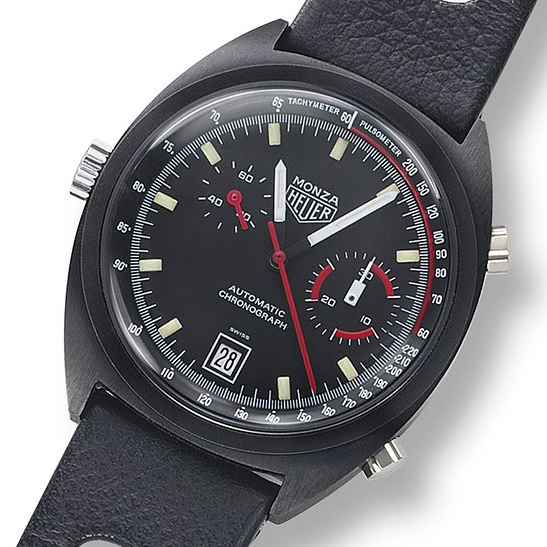 Today on “Vintage Eye,” we’re taking a look at one of the most noteworthy vintage-inspired new releases from BaselWorld 2016. Our subject is a brilliantly honest, modern re-issue of a bold, somewhat iconic, and ultra-collectible watch— the TAG Heuer Monza.

Lauda, a rather famous Formula One driver, managed a third place win and helped earn the title of Formula One World Champion for Ferarri One.To put the watch into proper context, let’s go back to 1975. Heuer (now TAG Heuer), the sponsor and official timekeeper of Team Ferrari from 1971-1979, stamped the hood of Niki Lauda’s Ferrari.  In celebration of this surprising, title-winning season, Heuer CEO Jack Heuer gifted the Ferrari One team in 1976 with what he saw as the perfect congratulations for its World Championship — A PVD-coated, racing-inspired, special-edition chronograph he named the Heuer Monza.

The first and most well-known model featured a strong, all-black, brushed, 39-mm cushion case similar to ones we see today. Modeled conceptually after the second generation (1969-79) Heuer Carrera, the vintage Ref. 150.501 Monza (above)  featured an automatic chronograph function powered by Heuer’s Caliber 15, an “economy” version of the company’s Caliber 12 (notice the telltale left-side crown and right-side pushers on the case). The movement featured a seconds subdial at the 10 o’clock position, the date at 6 o’clock, and a 30-minute register at 3 o’clock. The dial’s defining features included a pulsometer (used to measure heart rate) and tachymeter scale (used in auto racing to measure speeds). Illuminating the deep, black dial are white and red accents on the hands, pulsometer scale, and seconds register.

Moving on to today’s re-issued version (above) — the watch’s new 42-mm, sharper-edged cushion-case houses Caliber 17, the same automatic movement featured in a 2000 re-edition of the Heuer Monza (based on a 1930s Heuer chronograph), which has a power reserve of around 42 hours. This watch also brings with it two taller steel pushers and a more traditional right-side crown, both contrasting with the matte black of the case. The case and bezel are constructed of titanium (instead of the steel or brass with PVD used in the past), ensuring a more durable and lighter wear.

The dial’s symmetrical minutes and seconds subdials, date function at 6 o’clock, sword/pencil hands, hour markers, and vintage “HEUER MONZA” print all reflect the original reference. On top of this, this watch interestingly includes both the tachymeter scale and pulsometer scale. The color scheme is, of course, racing-inspired: red-white-black, with some orange Super-LumiNova thrown in. The all-black caseback features the familiar logo in red lacquer (see below).

I definitely prefer the ’76 case at 39 mm (a biased opinion resulting from my child-like wrists), with the left-sided crown. I tend to view the Ref. 150.501 as the more coherent design in the history of the series, albeit a more cheaply developed product. However, I don’t think today’s new case is necessarily out of line. While an additional 3 mm in diameter is a large jump for any piece, especially from 39 to 42 mm, the bulkier and sharpened edges of the case (somewhat reminiscent of a 1930’s square-cushion Heuer chronograph), along with the size jump and crown-position change, allow the watch to become more balanced, while simultaneously maintaining its vintage feel.

The new TAG Heuer Monza, available later this year for around $5,200, will come on a full-grain black calfskin strap with top-stitching, hinting at the design of the three-spoke steering wheels on the racing cars of the 1970s. Overall, although it includes some very distinct differences from the Monzas of the past, this piece does well in honoring its predecessors. The color scheme is iconic, with the black and red elements and “vintage” orange Super-LumiNova (a modern addition) packing one hell of a punch together. The matte-black case, solid caseback, and steel pushers balance each other in a way that accentuates all the right elements. Most of all, true to the lineage it has set out to represent, it’s just a killer watch.

For our most recent article, in which I compare modern and vintage examples of the Hamilton Pan Europ Auto Chrono, click here.

Caleb Anderson is the Director of Outreach and Anna Griffin (who contributed to this article) is the Photographer at the online vintage watch boutique and blog theoandharris.com. Since starting at Theo & Harris, both have garnered extensive knowledge on vintage watches, and spend much of their time sharing their opinions within the field. Currently located near New York City, the two are persistent students in all things historical, writers on watches, and occasionally passable athletes.

Vintage Eye for the Modern Guy