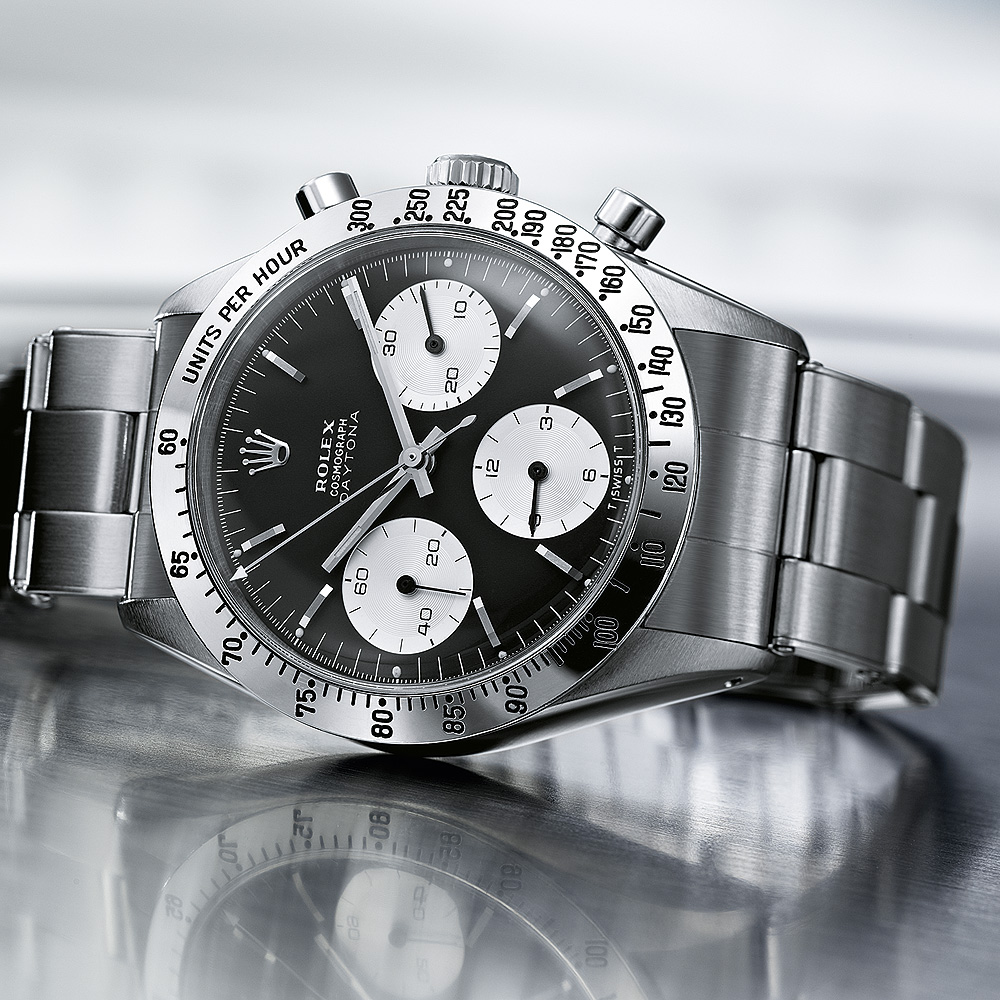 In this feature-length article from WatchTime’s January-February 2016 issue, we take a look at the 53-year history of the Rolex Cosmograph Daytona, the brand’s iconic chronograph watch.

For most of Rolex’s history, chronographs took a back seat to three-handed models. The company did produce some chronographs, but equipped them with third-party calibers that ticked in conventional, classic cases, not its well-known Oyster case. Rolex introduced its first Oyster-cased chronograph during WWII, but it was anything but a hit.

In 1955, Rolex launched its Reference 6234 chronograph. Neither “Cosmograph” nor “Daytona” appeared on the dial; the watch was simply labeled “Chronograph.” Rolex made about 500 of these watches each year until 1961, when the reference was discontinued. The watch sold for about $200 in the early 1960s. This model wasn’t very successful, either: it and other early Rolex chronographs often languished on dealers’ shelves because other manufacturers had long since established themselves as chronograph specialists. Nowadays these so-called “Pre-Daytonas” are rare and desirable: $20,000 is merely the entry-level price for one of these hard-to-find models with a silver or black dial and stainless-steel case.

The first automobile races were organized on the beach at Daytona, Fla., in 1902. Many new speed records were set in the following years. Sir Malcolm Campbell of Great Britain was among the most successful racecar drivers on the stretch: he wore Rolex watches both on and off the racetrack in the 1930s, when he held the world land speed record. Campbell wrote a thank-you letter to Rolex in 1931, telling the company he was very impressed by his Oyster’s durability.

The newer route of the Daytona racecourse, which formed an elongated oval with a slight bend in it, ran partly across the beach and partly along the oceanfront roadway. It wasn’t until 1959 that the race was run solely on asphalt: namely, at the newly opened Daytona International Speedway.

Rolex first served as Daytona’s official timekeeper in 1962, one year prior to the debut of the Cosmograph Reference 6239. Rolex nicknamed this model “Daytona” the same year to emphasize the watch’s affiliation with the prestigious auto race. This timepiece was conceived expressly for racecar drivers, which explains why the tachymeter scale on the bezel is significantly larger than its counterparts on most other watches.

Reference 6239 attracted a celebrity devotee in the late 1960s. Paul Newman wasn’t just an actor: he was also an outstandingly successful racecar driver. In his heyday, he even had his own racing stable. His Daytona watch accompanied him on his races. In the 1980s, collectors gave the nickname “Paul Newman” to this style of Daytona, which can be recognized chiefly by the contrastingly colored seconds scale along the dial’s periphery.

Paul Newman Daytonas can change hands at auctions for as much as $100,000. But there are obvious differ- ences between them. The original Paul Newman watch had a white dial with black elapsed-time counters and large, easy-to-read numerals in art deco style.

The other dial variation, which has small and simple numerals in the subdials, can be bought for prices ranging from $20,000 to $30,000. The increase in value is immense: these watches sold at auctions in the late 1980s for the equivalent of $3,000 to $4,000. That means their price has increased nearly tenfold since then.

If you’re thinking about buying a Paul Newman Daytona, be careful. It’s relatively simple for a crook to convert a standard Daytona into a “Paul Newman”: experts believe that more counterfeit Newman dials are in circulation than genuine ones. And some seemingly complete watches aren’t entirely original, i.e., they’ve been cobbled together from various individual components.

All classic, hand-wound Daytonas contained the Valjoux Caliber 72 in one of its variations. Rolex comprehensively reworked this caliber, equipping it, for example, with the brand’s own shock-absorption device. This caliber was produced in large series, which makes counterfeiters’ lives easier: they can find it inside diverse no-name chronographs, which they can buy for a few hundred dollars. (But there’s an advantage to a caliber that was produced in large series: spare parts for the movement are relatively easy to find.) The differences among the several caliber variations are apparent only under close scrutiny. Watches purporting to be Daytona models should therefore be purchased only from reputable auction houses or dealers. You can also send the watch to Rolex, where the company’s experts can substantiate its authenticity or unmask it as a fake.

Rolex switched to screw-in push buttons with the debut of Reference 6240 in 1965. These seal the watch’s case nearly as hermetically as the Oyster models without a stopwatch function. The bezel of Reference 6240 was black with an acrylic inlay. Reference 6262, which was manufactured in one year only, 1970, and is therefore extremely rare, marked Rolex’s return to an engraved steel bezel and to unthreaded push buttons. The movement was also modified: Rolex raised the frequency of the Valjoux caliber from 18,000 to 21,600 vph.

This movement was used in Reference 6264 from 1970 to 1972. Unlike the 6262, Reference 6264 had a bezel with an acrylic inlay and screw-in push buttons. The last references with hand-wound movements were 6263 and 6265, which were produced from 1971 to 1988. The first of these is especially valuable: Christie’s auctioned off one of these watches in 2013 for nearly 1 million Swiss francs, a record-breaking price.

In 1988, mechanical watches seemed like quaint relics from a bygone era because quartz technology had long since superseded them. That year, Rolex decided to introduce a self-winding Daytona. Rolex used Zenith’s El Primero movement, which had been introduced in 1969. Rolex made major changes to the El Primero, including slowing its frequency from 36,000 to 28,800 vph. This resulted in a longer power reserve and longer service intervals. Rolex renamed the movement the 4030.

Demand for sporty chronographs took off at this time. Waits of up to three years were not unusual for would-be Daytona buyers. Rolex continued to offer the models in all steel and all yellow gold, which were later joined by steel- and-gold and white- and rose-gold variations. With prices starting at about $6,000, steel-and-gold models from the late 1980s and afterwards are now the least costly Daytonas on the used-watch market. All-steel models in good condition are somewhat more expensive: their prices start at around $7,000. Here, too, caution is in order. Accompanying papers and an original box increase the watch’s value, but cannot guarantee its genuineness because these accessories, too, are often skillfully counterfeited.

IN 2000, Rolex launched the first Daytona with an in-house movement. Caliber 4130, still used in today’s Daytonas, has 44 jewels, a 72-hour power reserve, and Kif shock absorbers for its balance and escape wheel. Vertical coupling assures a smooth start for the elapsed-seconds hand. The new movement, like the El Primero it replaced, has column-wheel switching.

The 4130 has had Rolex’s in-house blue Parachrom hairspring for the past decade. Prices for the watch are high – used models in steel can cost nearly as much as brand new ones ($12,000). The most recent addition to the Daytona lineup is a platinum version with a brown ceramic bezel ($75,000), introduced in 2013 to commemorate the Daytona’s 50th birthday. This longevity is what distinguishes a true classic.